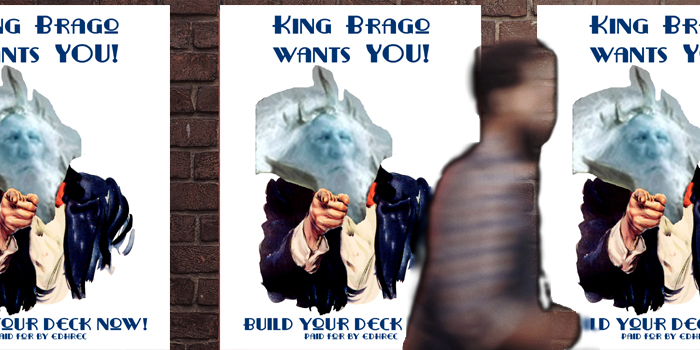 All the King's Men

Fire in the Hole! Power Sink is back in the trenches. This is the article series where we give new marching orders to the commanders that usually make playgroups want to go AWOL. This time Brago, King Eternal is getting a demotion.

Brago is ranked #53 on EDHREC with 4,505 decks. He is the second most popular Azorius commander and the #1 commander on the Blink theme page, making him the undisputed blink-king. Blink is a strategy that relies on permanents with abilities that trigger when they enter the battlefield (ETB) alongside effects that exile those cards and return them to the battlefield. This is a powerful strategy capable of accruing massive amounts of value, and Brago not only offers a way to do it repeatedly, but unlike many other blink effects, he can do it with any nonland permanent as opposed to simply creatures. This means that even mana rocks can be "reset" to be used again.

The fact that Brago needs to connect with an opponent is somewhat of a weakness, but that's mitigated by his inherent flying, and having access to white and blue gives him plenty of tools to get past opposing creatures. I briefly had this commander back when it was released in 2014 with Conspiracy, and it was easily one of my most powerful decks at the time. It's been quite a while since I've played this commander, so let's look at the average deck to see what modern warfare with Brago looks like nowadays.

Naturally the average deck contains many powerful ETB cards since the commander can turn every one of them into a value engine. Cloudblazer, Mulldrifter, and Omen of the Sea will keep the cards flowing while Kor Cartographer and Solemn Simulacrum supplement the suite of mana rocks to make sure the deck has all the mana it needs. This deck can easily keep the board clear of enemy threats by bouncing them with Venser, Shaper Savant and Reflector Mage, removing them entirely with Reality Acid or Act of Authority, or it can lock down a board with Stonehorn Dignitary or Lavinia of the Tenth. The deck also has numerous blink effects outside the commander, such as Teleportation Circle, Deadeye Navigator, and Yorion, Sky Nomad, to give us even more value out of ETB cards.

While I would say this is a deck that is set up to 'not lose' rather than 'to win', it does employ a few tricks that can end the game in spirit, if not in life totals. Strionic Resonator is a unique combo piece in this deck. Provided you have enough mana rocks, you can use the Resonator to infinitely copy Brago's trigger. (When Brago hits an opponent, copy that trigger with the Resonator. Then allow one of the Brago triggers to resolve, blinking as many things as you want, including at least two mana worth of mana rocks, and the Resonator. Then you can reuse the Resonator to again copy Brago's original trigger on the stack. Lather, rinse, repeat!) This gets you infinite ETB triggers and often infinite mana for any instant-speed effects. Brago can also lock a game out by clearing opponents' boards with Cyclonic Rift by getting it back each turn with Archaeomancer.

While they definitely have a place in the game, endless value and control strategies aren't exactly everyone's idea of a good Commander experience. I think it's fair to say that Brago is one of the commanders that gives Azorius a somewhat dour reputation in the format. So what are we doing to change up the typical Brago experience? We're going to war with a Soldier deck!

War, What Is It Good for?

Rather than just making Soldier tribal and supporting it with good draw and removal, we're going all-in on the theme and requiring all cards (outside of mana rocks and lands) to either be Soldiers, make Soldiers, or have some kind of military theme. This limitation on card pool means we're going to have to get creative with even the basic functions of our deck, but a surprising number of soldiers have ETB effects that our commander can use.

For card draw, Search Party Captain and Resistance Squad can scrounge up supplies, while Militia Bugler sounds the call to get small creatures out of our deck and ready to deploy. Protector of the Crown and Palace Jailer are there to remind everyone who the commander in chief truly is by introducing the monarchy to the game. We also plan to engage in combat behind enemy lines, so we might as well set up a Reconnaissance Mission to get some Military Intelligence and whether it's ours or our opponent's army that's tapped out it's always a good idea to Keep Watch.

Quite a few of our Soldiers can lay down suppressing fire in the form of temporary removal. Spire Patrol, Fairgrounds Warden, and Kor Hookmaster can lock down a single creature, while Lavinia of the Tenth can hold our opponents cheaper nonland permanents at bay. Aerial Extortionist is somehow a Soldier despite the name giving clear Rogue vibes, but it's also an incredible removal and card draw engine, as it can work with our commander to remove up to two nonland permanents a turn. If we're looking for a more permanent answer, we have Martial Coup and Elspeth, Sun's Champion to wipe the board or add more Soldiers to our army. If we get enough Soldiers, Catapult Master can exile out any creature at instant speed. Kalemne's Captain and Act of Authority can deal with problematic artifacts and enchantments.

Drawing cards and removing things is already what people expect from Brago even if we're using some unusual cards to do it. The typical locks and combos don't fit our theme, so instead we're looking to win games through combat. As it turns out, Brago's blinking ability makes him an excellent recruiter, because there are quite a few creatures that make 1/1 Soldiers on ETB!

Evangel of Heliod and Reverent Hoplite are veritable armies in a can with how high our devotion is likely to be in this deck. Lena, Selfless Champion not only makes Soldiers, but she also serves as protection from board wipes. Abdel Adrian, Gorion's Ward is a great way to keep key cards safe in exile while adding to our army. Knight-Captain of Eos has an added benefit of protecting us from counterattacks. Horn of Valhalla adds to our numbers and it can be used to power up Brago when he wades into battle. Finally, we can get extra value by adding the initiative mechanic with Undercellar Sweep and we can recruit some more soldiers if anyone dares to take that away from us.

Most of the time, relying on a horde of 1/1's just isn't going to get you to a win in Commander, so we have a number of officers to make sure we're getting the most out of our recruits. Daru Warchief, Paragon of New Dawns, and Phantom General all provide a static boost to our soldiers. Field Marshal and Captain of the Watch also provide a significant advantage on the battlefield by providing first strike and vigilance respectively. With all these tokens we're making and creatures we'll be blinking in and out of the battlefield, Cathars' Crusade is going to be a game ending threat. We can't just rely on brute force to take the game, so we have a few ways to outmaneuver our opponents. We may not have a critical mass of keywords in the deck, but the fact our commander has flying is reason enough to include Odric, Lunarch Marshal. Finally, Odric, Master Tactician will let us decide how our opponents block, or don't, whenever we attack with three other creatures.

Building a deck around a theme presents a fun brewing challenge as well as an excuse to run cards that otherwise wouldn't see play. These kinds of decks may not be the strongest you can build, but they can be great conversation pieces that can lead to memorable games. Hopefully you found this to be a fun new take on a commander that has historically been known for terrorizing playgroups. It's well past time for some R and R. At ease, reader, but feel free to sound off in the comments about your favorite theme deck you've built or played against.