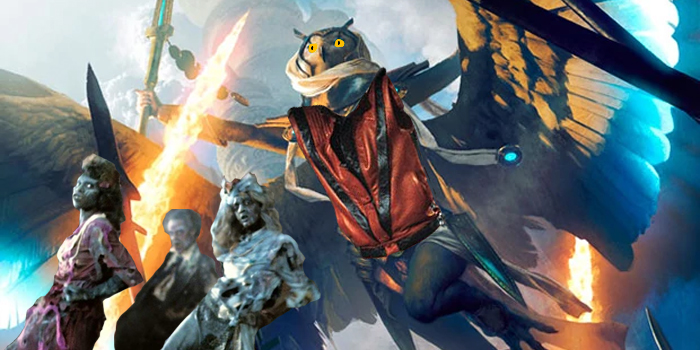 Welcome back to Power Sink, the article series where we take the commanders with the most bite, and give them a deck that won't leave a pod in shambles. This time we have a bone to pick with Derevi, Empyrial Tactician.

Rather than bury the lede like I usually do, I'm going to let you know upfront that I'm building a Zombie deck. Before all the purists out there tear me limb from limb in the comments, let me just explain that Derevi is, in fact, a Zombie. First of all, Derevi just keeps coming back from the dead with her ability to come out of the command zone for just four mana. Second, as soon as she shows up, all of your creatures are afflicted with the ability to tap or untap permanents whenever they deal combat damage to an opponents. Seems like a Zombie plague to me. If anything, Derevi is more of a Zombie than any of the commanders that actually have the creature type!

Derevi's abilities are powerful if you build around them, and having access to blue green and white means you can utilize the cards and mana you need to deploy your strategy as well as the means to protect it. Derevi's been around since Commander 2013, so most players are familiar with how strong it can be, but let's take a look at the average deck on EDHREC and see what Derevi decks are up to these days.

Derevi has long had a reputation as a stax commander, and that's certainly present in the average deck. While Pod may be the most popular theme on Derevi's page, if you take a close look, you can see that it's also basically a stax deck. The classic move here is to get in with small creatures to untap your lands, mitigating the effects of Stasis, Winter Orb, and Hokori, Dust Drinker. Once opponents have been locked out of mana, they can easily be beaten down by small creatures, like Archon of Emeria, Collector Ouphe, and the controversial Drannith Magistrate, which also restricts player options.

Myrel, Shield of Argive shows up in 21% of the 92 Derevi decks made since The Brothers' War was released, and it's easy to see why. Keeping opponents from responding during your turn is great for dropping a combo or a stax piece, and those Soldiers she makes are just more potential untaps for Derevi.

With a commander that cares about dealing combat damage, it's natural for card draw like Bident of Thassa and Toski, Bearer of Secrets to show up. Tamiyo, Field Researcher can tap down permanents if you don't need more cards, and Verity Circle lets you convert Derevi's taps into cards. While it's not a combat damage trigger on its own, Willbreaker lets you use Derevi to steal opposing creatures by targeting them.

So now, let's change things up!

While Zombies exist in every color of Magic, it's safe to say that black is the Zombie color. While we're cutting ourselves off from the best Zombies and Zombie payoffs, we still have ways to make ravenous brain-eating hordes.

We're leaning heavily on Field of the Dead to make our Zombies. While it's not our only option, it is the most effective, and a chunk of our deck is going to be dedicated to it. We can tutor it up with Hour of Promise or Sylvan Scrying, and Pir's Whim gives us the added bonus of taking away our opponents' toys. If we already have our Field in play, we can find Vesuva or Thespian's Stage instead to copy it. Ancient Greenwarden will double up our field triggers and allows us to get it back if it ends up in the graveyard.

We don't want to rely solely on lands to trigger the Field, so we're also running Murasa Rootgrazer and Ruin Ghost to get extra Landfall triggers. Plus, these also give us something else to do with the untap triggers from our commander.

Stitcher Geralf, Havengul Runebinder, and Geralf, Visionary Stitcher all have tap abilities that create Zombies which we can untap with Derevi. In fact, Derevi makes a good target to sacrifice for Geralf since she negates commander tax.

Creatures with Embalm and Eternalize are another avenue to grow our Zombie horde, and many of them have useful effects. Angel of Sanctions is removal, we can draw with Champion of Wits, and Aven Wind Guide grants flying and vigilance to our token creatures. Timeless Dragon and Honored Hydra are there for when we just need a big creature. Finally we have God-Pharaoh's Gift to "Eternalize" any creature in our graveyard.

These tokens are the best targets for our Populate effects, like Trostani, Selesnya's Voice or Song of the Worldsoul, and we can copy them by sacrificing them to Cleaver Skaab.

Since we don't want games with this deck to end 28 days later, we're splurging a bit with Anointed Procession to facilitate making an overwhelming army of tokens. We also have a cheaper version of the effect with Adrix and Nev, Twincasters, and we can drop Legion Loyalty in advance of a big swing to close out the game. Of course, if combat isn't an option we're throwing in Throne of the God-Pharaoh to drain the table directly.

I want to give credit to my buddy Alex for inspiring this deck. I was enamored with his Selesnya Zombies deck when I'd seen him talk about in a few online communities. I've had the opportunity to play against the deck a few times, and it's a ton of fun to see in action. You can check out his current version here, or you can listen to CMDR Central do a breakdown of an older version when it was led by Trostani, Selesnya's Voice, here. Alex's deck is way more tuned than what I put together, but I think both are unique conversation piece decks.

Much like how society collapsing due to a Zombie outbreak brings people together in a tenuous alliance for survival, an interesting Commander deck can build connections with people you wouldn't expect. What did you think of this deck? Was it a thriller? Or do I not have any Braaaaiiinns? Let me know in the comments.