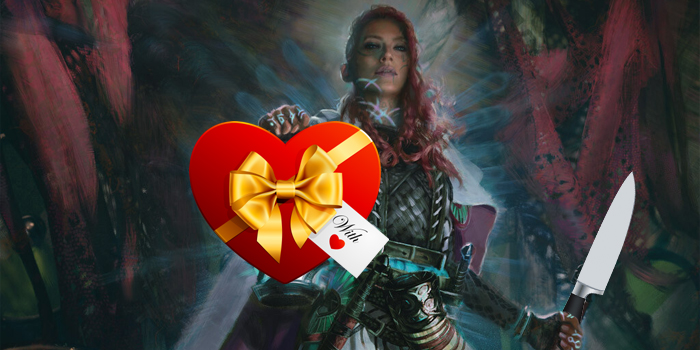 We Have Such Sights to Show You

Welcome back to Power Sink, the series where we take the R-rated commanders of the format and make them suitable for general audiences. This time we're tackling a legend that had people shaking in their boots at the mere prospect of facing her: Tergrid, God of Fright

Coming in at over 1,400 decks, Tergrid is the fourth most popular mono-black commander and the most popular from her set. While she doesn't have a salt score yet, I wouldn't be surprised if she ends up with one soon enough. The deck Tergrid asks for sits at a confluence of strategies that are often despised in Commander. She wants to see opponents discarding cards and sacrificing permanents - territory often associated with Stax - and she rewards you for it by allowing you to steal any permanents lost by your opponents in that way. Stax is one thing, but Commander players also really dislike having their stuff stolen. She also has the option of being cast as Tergrid's Lantern, which doesn't set off alarm bells like her creature side, but can still be used to close out a game if you happen to find infinite mana.

Now that we've discussed the general issues with Tergrid, let's take a look at her average deck to see what exactly she's up to that's so frightening.

As expected, we see a selection of discard and sacrifice effects. The usual suspects like Plaguecrafter and Fleshbag Marauder are present here along with underrated gem Vona's Hunger, which is particularly back-breaking with Tergrid. Smokestack, the very card the Stax archetype is named for, makes an appearance too.

There are plenty of discard options here as well. Necrogen Mists and Bottomless Pit have players discarding every turn, while one-shot effects like Syphon Mind and Burglar Rat can lighten hands when it isn't expected. The aptly named Oppression makes casting any spell a nightmare. If that isn't enough, players can lose their whole hand to Dark Deal or Mindslicer.

Pox and Smallpox plague the table with sacrifice and discard demands, even going so far as to get lands. Game-enders like Torment of Hailfire and Death Cloud will leave any survivors waking up to the ashes of their former hand and board state while the Tergid player has all their stuff. Of course, the standard mono-black tutor, draw, and big mana package are also there to lend consistency to it all.

This gives us a deck that doesn't really give other players a chance to play Magic and can feel hopeless to fight against due to the huge resource imbalance. Trying to solve that puzzle can be fun, but not everyone wants that kind of experience.

So what can we do with Tergrid to leave people with pleasant(ish) dreams, instead of recurring nightmares? If we're going to take cards from our opponents, why not give them something in return? That's right, we're making Tergrid Group Hug.

Come Play with Us, Danny

Group Hug!? In mono-black!? It's more common than you think. Alright, maybe not that common, but the deck does exist. Sporting 183 decks on EDHREC, Seizan, Perverter of Truth gives us a roadmap to what we want to do with Tergrid (and naturally, we're including it in our deck). While we lack the colors usually associated with Group Hug, there are plenty of available options. Howling Mine, Font of Mythos, and Horn of Greed are great for keeping the cards flowing for everyone, even though giving cards to our opponents on their turns isn't ideal for our strategy.

Since we're going to employ discard effects, which are almost all at sorcery speed or trigger on each upkeep, we want to prioritize cards like Temple Bell, Otherworld Atlas, and Mikokoro, Center of the Sea, which let us control when we give cards, namely on our turn. Howling Golem and Master of the Feast are group draw effects on creatures, so we can get them back a little easier than our artifacts. Rankle, Master of Pranks is a triple threat with our commander, though we can just opt to only use the card draw mode. Horn of Plenty is costly at six mana, but for once our opponents will actually be excited to hear the phrase, "Do you pay the one?"

Aside from card draw, we have a few other "hugs". Endbringer's Revel is a creature recursion engine the whole table can use, but it plays well into our strategy since we're leaning heavily on creatures for our effects. It's also important to note that the card works at sorcery speed, so opponents can't respond to Tergrid's ability with it.

Homeward Path is included in case we go too far with the theft, but it also allows us to have an incredible bargaining chip once we have a bunch of stolen creatures. Tempting Contract is going to look a lot more enticing when the extra mana helps our opponents get their cards out of their hands and out of danger. We're even going so far as to share our tutors: Wishclaw Talisman and Scheming Symmetry are known for being shareable tutors, but did you know Varragoth, Bloodsky Sire can target any player?

The Call is Coming from Inside the House

So far, we've talked about all the love we're showing our opponents, but we are playing Tergrid, and we're going to take things from our opponents. Using our opponents' cards is one of our paths to victory. For this deck, we're focusing on discard effects, rather than sacrifice. While discard is more controversial, I think it's less of a feel-bad to lose something you didn't spend mana on, and sacrifice effects punish some strategies significantly more than others. What's important is the approach here; we want to apply the discard effects lightly rather than making our opponents hellbent. Think of it as payment for all the favors we're doing them.

Creatures like Burglar Rat and Liliana's Specter will eat away at cards in our opponents' hands, and we can cycle them through our sacrifice outlets and recursion effects reuse them. Creeping Dread and Necrogoyf impose a "hand tax" each turn. While they aren't exactly discard, Gnat Miser and Locust Miser reduce the maximum hand size of opponents so they can't just hang onto all those cards we're giving them. We can also get some discards and sacrifice by running through the Tomb of Annihilation with Acererak the Archlich and Dungeon Map. Even though we aren't focusing on sacrifice effects, I just couldn't help myself including Curse of the Cabal. Putting this out there with Suspend while our commander's in play makes a cute little minigame.

So how do we turn on everyone in a pivotal moment and reveal that we were the killer all along? Like any good horror movie villain, we're going to rely on something sharp to get the job done. Blackblade Reforged and Vorpal Sword are there to take advantage of Tergrid's menace and it's likely that our opponents are going to give us some of their lands, making these weapons a bit more potent.

If we can't get through with our commander, we are also using Underworld Dreams, Fate Unraveler, and Ob Nixilis, the Hate-Twisted to damage our opponents for all those extra cards we're giving them. Megrim and Liliana's Caress are going to make those discards hurt that much more. Raider's Wake, and Fell Specter drop life totals and provide their own discards.

Syr Konrad, the Grim plays into our opponents discarding cards, as well as our own recursion and sacrifice effects, especially Tortured Existence. Killing Wave is a great late game play; we can sink a bunch of mana into it and give our opponents the difficult choice of losing life or giving us a creature. Finally, Necrotic Hex has everyone sacrificing six creatures and giving us six zombie tokens, it's almost an Insurrection that gives our opponents a turn to figure it out.

Even with all of these group hug cards, it's still possible to create a miserable game. The approach here matters as much if not more so than the cards in the deck. Speaking from my own experience, it is possible to have an enjoyable game with a discard deck. Discard can be a way to put pressure on your opponents without shutting them out of the game entirely.

If you try a deck like this, be sure to get feedback after the game as well. It's important to gauge if you went too far, and it shows your opponents that you care about their enjoyment. If the discard in this deck is too much salt for your taste, or Group Hug just isn't your thing, there are a few other Power Sink ideas for Tergrid. I came pretty close to going Rat Tribal for this deck; there are already quite a few Rats in the list I brewed and there are even more that synergize with Tergrid. I've also heard of Tergrid decks that just use her back half, the Lantern!

That's all for this installment of Power Sink. Did I go too far? Is a fun Tergrid deck even possible? Should I build that Rat tribal deck? I'll be stalking the comments section, so let me know!