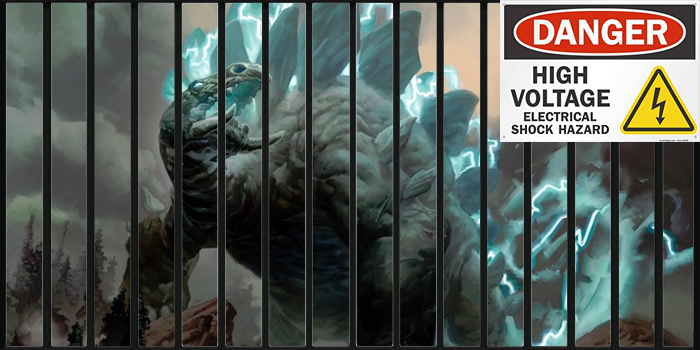 Like a bolt from the blue, it's another installment of Power Sink, the articles series where we take the commanders that usually make you blow a fuse, and ground them. This time we're rewiring Kalamax, the Stormsire.

Kalamax is the 25th most popular commander on EDHREC ,with 3,439 decks to its name. Kalamax sparked a lot of interest when it debuted in the Commander 2020 Precon decks, and before long it became the #1 Temur commander. Kalamax's ability to copy instant spells has a tendency to push its deck into a more powerful space. Playing at instant speed is inherently powerful, and getting an extra copy of an instant can lead to shockingly explosive plays that can be hard to interact with, since you need two counterspells to stop those instants.

Kalmax is also quite good at stopping its opponents, since copying removal and counterspells can make it easy to keep opponents under control. Kalamax needs to be tapped to gain the benefit of its ability, but as a four-mana 4/4 that gets larger over time, it's more than prepared to charge into combat.

As strong as this style of play is, it can be frustrating for opponents. Not even just because of combos; Kalamax wants to see you cast a spell on every turn, which means it can sometimes feel like it's taking a greater share of the game time. It can also feel like you have to constantly walk on eggshells to play around a dino that's always casting responses to other players' game actions. Plus, since Kalamax can play a lot like Shu Yun, the Silent Tempest, it can use combat tricks to take a player down in a flash. Let's turn the lights on the average deck and see watt people are currently doing with Kalamax.

I don't think anyone is shocked to see so many copy effects. Most notable among the copy effects are Twincast and Reverberate. With these it's possible to start the infinite copy combo that makes Kalamax infinitely large, and from there it's just a simple activation of Kessig Wolf Run to give the infinitely-large dino some very lethal trample. This deck can also do a similar combo with Ral, Storm Conduit, which will just end the game. Veyran, Voice of Duality not only sets off Kalamax a second time, but will also set off Double Vision, Thousand-Year Storm, and Twinning Staff again.

With all the casting and copying of spells, Archmage Emeritus and Storm-Kiln Artist supercharge the gameplan with cards and mana. Speaking of mana, Kalamax can easily get a ton of it by copying instant ramp cards, like Harrow, Roiling Regrowth, and Natural Connection, while Wilderness Reclamation makes sure mana is always available. There are also some things that show up on Kalamax's EDHREC page (though not its average deck) that are worth mentioning: Nexus of Fate is an instant-speed extra turn spell that shows up in about 31% of Kalamax decks. Extra turns are famously salt-inducing, and this one shuffles itself back in if it hits the 'yard from anywhere, so there's a good chance for it to come back.

All this can lead to a deck that's hard to interact with and that can take up a lot of game time on each other player's turn.

So, how are we going to lower the voltage on Kalamax? Ohm my goodness, do we have a joule of a deck for you this time. Temur Energy electrified the Standard format back in 2017, even causing Attune with Aether and Rogue Refiner to catch a ban. As strong as it was in Standard, Commander requires more amp, so I think this is a great way to Power Sink Kalamax. There are 486 decks under the Energy theme on EDHREC, which Kalamax doesn't even show up as a commander for. We don't want to catch any static from our opponents, so we've cut the cord on any potential infinite combos by removing the offending copy effects; we want to conduct ourselves properly during our opponents' turns. Now that I've given you an idea of what we're up to, let's switch over to the decklist.

With only three available instants that use the Energy mechanic, there seems to be no reason to have Kalamax lead a deck like this. Glimmer of Genius is far from the most efficient draw spell, damage-based removal, like Harnessed Lightning, is unfavorable in this format, and Highspire Infusion is just a pump spell with no evasion. We're using all three of those spells, but we need more.

As it turns out, a lot of Energy production comes from enters-the-battlefield abilities on creatures, so we can use instant blink spells, like Essence Flux and Ghostly Flicker, which Kalamax can copy, to get more Energy from our creatures coming back to the battlefield, provided we have enough targets. With creatures like Timeless Witness and Ardent Elementalist, our blink spells will make a circuit from our graveyard back to our hand. Decoction Module ends up being very strong in this deck, as it makes Energy for any creature entering our battlefield, and returning a creature to hand can be useful.

We aren't stopping at creatures, though! With a total of 32 instants and sorceries, Dynavolt Tower is going to provide a lot of juice and a little extra damage. This deck isn't heavily focused on artifacts, but a lot of our Energy outlets make artifact tokens, so Gonti's Aether Heart will give us a rebate on those, or we can spend eight Energy to get an extra turn once if we need it.

Once we've charged our batteries, we need to spend that Energy somewhere. Rounding out the "Banned in Standard" subtheme, we've got Aetherworks Marvel. For six Energy we can dig six cards down and cast a card for free. Keep in mind that if we find an instant, Kalamax will let us copy it.

Sometimes you just need a big dumb creature with trample, and for that we have Aetherwind Basker. Not only can it provide Energy for each attacking creature, but we can sink our Energy into it for a lot of damage. Making tokens is a common theme with Energy cards. Aether Chaser and Aether Swooper can make Servo tokens when they attack, and we can just spend three Energy on Whirler Virtuoso to make a Thopter. If we really have a lot to spare, we can sink eight Energy into Architect of the Untamed to make a 6/6 Beast.

If everything gets out of hand, we can hit the reset button with Aethersquall Ancient. Peema Aether-Seer and Maulfist Doorbuster even give us a measure of control over combat. Finally, Lightning Runner lets us buy extra combats with our Energy.

As fun as it is to fiddle with all these Energy cards, eventually we need to sock it to our opponents. Kalamax can certainly charge into the fray, but we also want to give it some help. With so many Energy triggers, Fabrication Module is going to power up our other creatures. Electrostatic Pummeler can get huge out of nowhere and benefits from the Kessig Wolf Run and Rogue's Passage in our land base.

We've also got a few instants that our commander can copy as a conduit to victory. Chorus of Might and Fatal Frenzy when attacking with Kalamax or one of our heavy hitters. If we're swinging with multiple creatures, we can give our team a solid boost by copying Dinosaur Stampede, and since Kalamax is a Dinosaur, this will give it trample. Commander players love their nonbasic lands, so a copied Mercadia's Downfall can easily overload our opponents.

Our battery needs a recharge, so it's about time to wrap this up. Energy is a pretty fun mechanic, but since it showed up in only two sets, it lacks the card pool to be widely adopted in Commander. I think plugging in a powerful commander is a great way to jumpstart a deck built around an under-supported mechanic.

Let me know in the comments what you think of this deck, or if there are any other mechanics that need a boost, or any commanders that need a Power Sink.