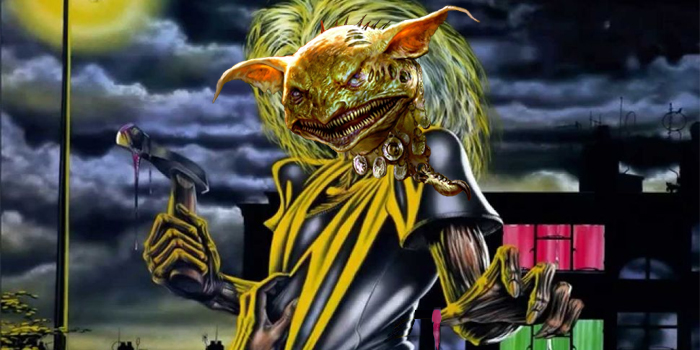 Hello, Commander players! We are Power Sink and we're here to ROCK your Commander games! We're bringing new riffs on the strongest commanders in the format. Tonight on lead vocals we have Krark, the Thumbless, and Sakashima of a Thousand Faces is on bass.

Krark and Sakashima started as a garage band in Commander Legends and have skyrocketed to stardom, currently holding the #7 slot on the Izzet chart on EDHREC, with 2,401 decks. This is in no small part due to the efforts of their manager, Ken Baumann of Stacked EDH, getting them a gig in the cEDH scene and onto the cEDH decklist database. You can find Ken's decklist here and his other awesome projects here, among which is a fantastic cEDH guide if you happen to be curious about that meta.

On its own, Krark is a risky proposition, as it makes you go double-or-nothing whenever you cast an instant or sorcery. Adding Sakashima lets you make multiple copies of Krark, making it more likely to both copy spells you cast and return them to hand. With the right number of Clones, this deck becomes a beast.

Let's take a look at the average deck from EDHREC.

The EDHREC average deck has a lot in common with the cEDH version. High-end mana rocks, like Mana Crypt and Jeweled Lotus, are present alongside cheap rituals, like Pyretic Ritual and Rite of Flame. These help to power out Krark and Sakashima in early turns to get the engine going. There are clone effects to get more Krarks, like Twinflame, Phantasmal Image, and Spark Double. Harmonic Prodigy and Veyran, Voice of Duality aren't clones, but they give each Krark clone and some other key cards an additional trigger.

Oh, and of course, a Krark deck wouldn't be complete without the eponymous Krark's Thumb, which lets you flip two coins and select your desired result.

With enough of these effects in place, it becomes almost guaranteed that you will get a few copies of any instant or sorcery you cast and bounce the spell back to hand so you can just keep casting it. This engine becomes hard to stop once you introduce free spells, like Deflecting Swat and Fierce Guardianship, and it turns Gitaxian Probe into a powerful draw engine. Storm-Kiln Artist, Tavern Scoundrel, and Strike It Rich generate Treasures to let you continue casting spells, all of it culminating in storming off with End the Festivities or Lightning Bolt.

Alongside the main gameplan, the deck also has multiple two-card combos to end the game on the spot. With Twinflame or Heat Shimmer on the stack, you can flash in Dualcaster Mage to copy the spell and copy the Dualcaster, resulting in infinite hasty creatures. This deck also makes use of the Brain Freeze + Underworld Breach combo to mill opponents out of the game. This is a unique and powerful spellslinger deck, but in the hands of an inexperienced pilot, you may end up with games that go two minutes to midnight.

You Don't Have to Be a Powerslave

So if this deck is an 11, how are we going to bring it down to a 10? First of all, we're going to slow things down like a mid-album power ballad and remove the fast mana. Free counterspells? Also gone. We'll be keeping a lot of the clone and Treasure cards, but we're turning the Krark engine toward a group hug strategy.

Instead of efficient cantrips, we're using symmetrical draw effects, like Prosperity, Skyscribing, and Vision Skeins. Once we have have a few clones we can cast and recast these cards to flood everybody's hands. We'll be supplementing our spell-based card draw with permanents like Howling Mine, Font of Mythos, and Folio of Fancies.

We're also going to change up the win conditions. While we could just hope to make our opponents draw out (and as cool as it is to take a game with a draft common like End the Festivities) we're going to win with a less direct but much more metal approach: Iron Maiden! Cue guitar and pyro.

In addition to Iron Maiden, we have Viseling, Ebony Owl Netsuke, and the classic Black Vise to punish our opponents for all those cards we're giving them, and in the case of Fevered Visions, damaging them and drawing extra cards. Emberwilde Captain introduces the monarch into the game and incentivizes opponents to attack elsewhere as they are likely to take quite a bit of damage if they come at us when we are the monarch. The recently printed Balor does a lot here, providing not only massive damage, but also artifact removal and hand disruption.

While we could just take a more direct approach to winning with cards like Khorvath's Fury and Molten Psyche, ending the game with a single spell wasn't the experience I wanted to provide. Having the win condition on-board creates an interesting dynamic to the game as opponents scramble to remove pieces before it's too late. There is also a distinct advantage to winning through permanents: many of our copy effects are geared toward copying artifacts as well as creatures, so the cards we're using to clone our commanders can also be used to copy our wincons. Just imagine how quick things are going to go with five Iron Maidens on the table!

Saheeli's Artistry lets us copy both an artifact and a creature so we can make an extra Krark on top of copying Iron Maiden or similar cards. Stolen Identity can Cipher onto a creature, so we can get more out of it by putting it on a creature that can attack, like that Balor mentioned earlier. Echo Storm takes advantage of the fact that we're using Partners by granting us multiple artifact copies for each time we've cast one of our commanders. Finally, Replication Technique allows us copy any of our permanents and lets us do it twice if we want to let an opponent in on the fun.

Run to the Hills

While this deck is certainly powered down, I don't think it completely escapes the potential to have some long turns, but we can do something about that. If this idea intrigues you, I recommend using multiple dice instead of flipping coins and getting some practice in with the deck before bringing it to the table. If you've never heard the term before, "goldfishing" is where you play a deck solo to see how it performs. This is useful for discovering interactions in the deck as well as becoming quicker at running through complex board states, and that knowledge can also be put to use in pregame conversations for more harmonious Commander games.

PS: If group hug or cEDH aren't your style, I also have a $50 budget deck Krark and Sakashima I built to play with the Scraptrawlers channel!

Alright, it's about time to end the show. Thanks for being a trooper and reading through to the end. Sound off in the comments, and let me know what commander you want me to try next!