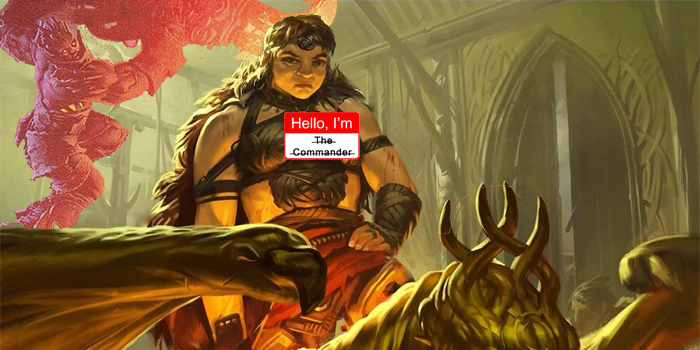 All that Glitters is Gold (Or Treasure)

Somebody once told me the world is gonna roll me, for playing with the sharpest tools in the shed. She was looking kinda dumb with her Sol Ring and Krark's Thumb in the shape of an L on her playmat. Well, the Power Sink articles start coming and they don't stop coming. We're fed to the rules and we hit the ground running with Magda, Brazen Outlaw.

Magda is ranked 96th overall on EDHREC with a respectable 2,498 decks. A little over a year out from her release in Kaldheim and she's already an all-star as the third most popular mono-red commander. Dwarves may not be the best supported tribe in Commander, but Magda adds a lot of power to the tribe by turning them into mana in the form of Treasures. She also provides card advantage by searching up artifacts or Dragons to the battlefield at the cost of five Treasures, which, in case you haven't noticed, have become extremely prevalent in the format.

Artifacts and Dragons are pretty broad categories, so there's a lot you can do with this commander. Dragons can provide a beatdown and direct damage in some cases, and finding artifacts opens you up to a variety of game-ending combos or stax pieces.

Let's consult the EDHREC average deck to get an idea of what we might encounter in a Magda deck.

Unsurprisingly, there are a lot of Dwarves to make Treasure. They may not be the greatest creatures in the format, but a fair number of them offer decent utility. Dwarven Warriors can tap on their own and can make a creature with power 2 or less unblockable, which is often useful for tapping other Dwarves. Bloodfire Dwarf can wipe the board of one-toughness creatures, Axgard Cavalry grants haste, and, my personal favorite, Dwarven Miner can deal with pesky nonbasic lands.

Of course, there are more than just Dwarves to get Treasure. Pirate's Pillage, Seize the Spoils, and Unexpected Windfall draw cards and make a Treasure. If a large influx of Treasure is needed, Xorn is there to make twice as many, while Brass's Bounty and everyone's favorite format-warping Goblin, Dockside Extortionist, will fill your coffers immediately.

Once you get at least five Treasures, Magda can start finding things in your deck. Terror of the Peaks can serve as removal or a win condition by dishing out damage whenever a creature enters your battlefield. Speaking of win conditions, Magda can find Hellkite Tyrant at instant speed, which is real easy to win with when you can generate artifact tokens. Maskwood Nexus makes every creature in the deck searchable and, since it also makes them Dwarves, you get a Treasure if those creatures get tapped.

The card we really need to discuss is Clock of Omens. If you turn Magda into an artifact, you can tap and untap her as many times as you like and make enough Treasures to get every artifact and Dragon in the deck. This can be made fast and consistent enough to be a cEDH deck, and Magda has two lists on the cEDH deck database. So how are we taking the back streets with this commander?

Hey Now, You're a Brawl Star

Magda's ability to tutor opens us up to building a deck with a secret commander. For those who don't know, a secret commander deck is built around a card in the 99. It's a risky strategy, but it makes for a unique deck and offsets the power level tutor commanders typically have. For a proper Power Sink, Clock of Omens and Hellkite Tyrant have got to go and instead we're building around the enchantment Bludgeon Brawl.

While Magda can't tutor for enchantments, she can find Tamiyo's Journal, which gives us access to any card in our deck provided we have three Clues to sacrifice. Red isn't great at making Clues either, but we have Magnifying Glass and Academy Manufactor for that, and if we're willing to live dangerously we can just skip all these artifacts and hope for the best and cast Gamble.

With Bludgeon Brawl, we can turn those Treasures our commander makes into Equipment. Equipping Treasure won't do anything on its own, but we have a few ways to weaponize that, if you'll pardon the pun. Champion of the Flame and Goblin Gaveleer have the potential to become huge creatures and even come with their own evasion, while Golem-Skin Gauntlets is a great way to make commander damage viable. If we can't make a decent attack, we can use cards like Soul's Fire or Chandra's Ignition for direct damage. Since those Treasures would Equip for free, we can put them on Valduk, Keeper of the Flame to go wide with a bunch of trampling tokens.

Speaking of going wide, Reckless Crew can make a crazy number of Dwarf tokens with Bludgeon Brawl, and those tokens can make us even more Treasure. Finally, if we have a bunch of creatures we can suit up, we can do massive damage to our opponents with Thundering Raiju.

The Ice We Skate is Gettin' Pretty Thin

Relying entirely on a single card can be a dangerous proposition in Commander, especially in mono-red, so we're dedicating a few slots to protecting Bludgeon Brawl. Most of the mass removal out there is at sorcery speed, so we have a decent chance of surprising our opponents with Warping Wail, and if that fails, we also have Tibalt's Trickery. Bolt Bend is a nasty surprise for any opponent looking to target Bludgeon Brawl. If Bludgeon Brawl ends up in the graveyard, we can get it back once we've transformed Conqueror's Galleon, or we can shuffle it back in with Elixir of Immortality.

Of course, all that recursion and protection may still not be enough in some games, so we also have a backup plan. Even if they can't be used as Equipment, having a lot of Treasures will make Nettlecyst a threat whether it's on a Germ or another creature. We can also sacrifice our Treasures to Extruder to add +1/+1 counters to our creatures or we can use them to activate Moonveil Dragon and buff our whole team. If we want to take the direct approach, Reckless Fireweaver damages our opponents for each Treasure we make, while Ghirapur Aether Grid allows us tap those Treasure to damage any target.

Only Shooting Stars Break the Mold

As much as I like how this deck turned out, there are a few cards I left out that I wanted to mention. Mycosynth Lattice with Bludgeon Brawl would allow us to equip our lands and allow us to use Vandalblast as a win condition, but I prefer not to use such an expensive card in a Power Sink deck. Deflecting Swat would be another great include alongside Bolt Bend, but was omitted for the same reason. Personally, I don't like tutor commanders, but I adore secret commander decks. Having all the best cards at your fingertips is not usually they kind of Commander deck I find myself drawn to, but I appreciate that they let you build around cards in a way that the rules of the format don't usually allow.

It's been fun walking through this deck, but I think we could all use a little change. Let me know in the comments what you would build for a secret commander deck.