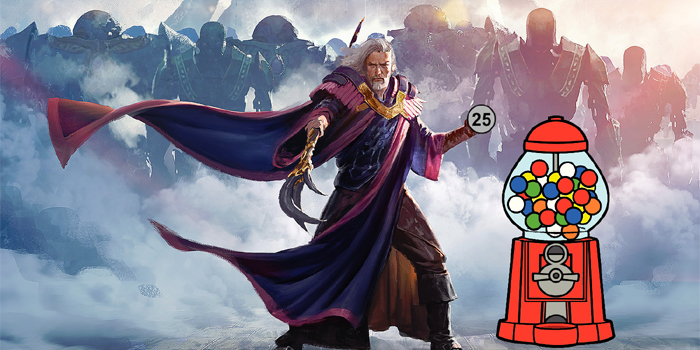 Hello and welcome to Power Sink, a new article series where I take the most overpowered, groan-inducing commanders that the format has to offer and give them a kinder 99.

We're kicking off the series with a name that strikes fear into the hearts of Commander pods and Phyrexians alike: Urza, Lord High Artificer.

Urza offers a lot of power in a compact four-mana package. His ability to tap artifacts for mana is reminiscent of Tolarian Academy, a card that is banned in Commander and Legacy and a key player during the infamous Combo Winter of 1998. In case that wasn't enough, Urza provides his own card advantage in the form of a mana sink that gets you a free random card out of your deck, not to mention that potentially huge artifact creature token he makes when he enters the battlefield.

Boasting over 2,800 decks on EDHREC, Urza is far and away the most popular mono-blue commander out there, and with a salt score of 2.45 out of 4, people clearly have strong feelings about this card. Let's take a look at the average decklist to get an idea of what people expect when sitting down with this commander.

We have stax pieces like Winter Orb and Static Orb, which Urza is famously known for tapping down to avoid their deleterious effects. The Dramatic Reversal + Isochron Scepter infinite combo is present here and is especially easy to achieve, as Urza can use any artifact as a mana rock. Finally, Thassa's Oracle is there to close out the game. All of this is supported by fast mana and the best card draw and countermagic blue has to offer.

With all this going on, it's no wonder Urza is often the poster child for pubstomping. High-powered Commander and cEDH can be a lot of fun if that's what everyone wants to play, but sometimes people aren't willing or able to face down that Urza PolyTyrant deck, and you might want something on a more level playing field.

Gumming Up the Works

So how are we going to "Power Sink" such a powerful commander? For this, I'll be showing off one of my personal favorite decks, something I call Urza's Gumball Machine. Aside from the commander, the deck uses only commons and uncommons, and just like a gumball, none of the cards cost more than 25 cents*. While I don't intend this to be a budget series, this is a great way to severely limit the pool of available cards and keep Urza's power in check. Many Commander staples aren't an option, and even many all-star budget cards remain out of reach. What we're left with is a pile of late pick draft cards people are going to be shocked to find anyone using in Commander.

Rather than leaning heavily on combos or stax, we're using the Constructs that Urza creates to win with some good old-fashioned combat damage. To do this, we want to flood the board with cheap value artifacts and tokens. Sure, these aren't going to be great individually, but keep in mind each of these mediocre cards is going to have a mana ability stapled to it.

While we're on the subject of mana, you may have noticed the deck only has 32 lands. Don't worry about that; 42 cards in the deck are either artifacts or make artifacts that our commander can tap for mana, and with an average mana value of 2.51, we'll have no problem casting our spells. It's not uncommon for this deck to find itself with over 15 mana available and a Construct with over 10 power. While it's far below a fully-powered Urza deck, the gumball machine is no slouch.

Remember, this isn't a bad Urza deck, it's a fair Urza deck.

Enough for the Class

Tokens are our best bet for getting a ton of artifacts on the field. Whirlermaker can make us Thopter tokens each turn, and while Efficient Construction would be more, well, efficient, it's just outside our price range and it's not even an artifact. To make some Treasure tokens, we can Equip a few of the cheap fliers we're running with Prying Blade or Goldvein Pick during early turns ,or we can put them on our Constructs to hit a little harder in the mid to late game.

Clues are perhaps the best token we can generate. Since tapping isn't part of the cost to sacrifice a Clue, we can use them freely for mana and still be able to draw with them. Magnifying Glass serves a double purpose as a token-maker and a mana rock we can use without our commander, while Floodhound can team up with fellow good boy Chakram Retriever to untap and potentially make multiple Clues in a turn. We even have token production stapled onto some of our spells! Most would agree that Pirate's Prize and Turn into a Pumpkin are far from best in slot when Ponder and Pongify exist, but those are way outside our price range and don't create a mana rock for us.

Quite a few of the permanents we run - our commander included - have an ETB ability. Archaeomancer and Scholar of the Ages are there to get our instants and sorceries back from the graveyard, Archaeomender can grab an artifact, and Meteor Golem removes troublesome permanents. Naturally we are employing a suite of blink and bounce effects to get the most out of these creatures.

These also conveniently double as much-needed protection for our commander. It should be no surprise that Urza is a removal magnet, and in this deck he needs to be on the battlefield or it's going to be apparent why all the cards we're using only cost a quarter. Siren's Ruse, Teferi's Time Twist, and Displace form a neat little engine with Scholar of the Ages, getting you both the blink spell you cast and any other instant or sorcery in your bin. Nephalia Smuggler does a decent enough impression of Deadeye Navigator, providing a reusable blink effect.

Bounce effects are another option we have to reuse our ETB effects, and while recasting our cards is mana-intensive, we have plenty to go around. Portal of Sanctuary can be used each turn and adds to our artifact count. Aether Tradewinds can bounce a problem while simultaneously getting us something back to hand. Esperzoa has an upkeep trigger that requires us to return an artifact to our hand, which we can recast to get extra ETB triggers for things like Ichor Wellspring or Servo Schematic.

Retraction Helix and Banishing Knack can be awkward to use, but are incredibly powerful when paired with Battered Golem, Mirran Spy, or Chakram Retriever, which can untap themselves or another creature, allowing us to return and recast something multiple times in a turn. This can and does go infinite in this deck with the right pieces (Ornithopter, for example), but we're not even aiming for combo, we're trying to cobble together a decent deck out of draft leftovers, and I don't think it's unreasonable to have a four-card combo.

Stick It to Them

Having a playmat covered in artifacts means nothing if our giant robots can't connect with our opponents. Luckily for us, blue is great at sneaking creatures past enemy lines. Blustersquall is outclassed by Cyclonic Rift everywhere else, but here it has a home providing an opening for an alpha strike (or defending against one). Sleep is often overlooked in Commander, likely because it only affects one opponent, but sometimes that's all you need, and it can leave the leading player with their shields down for a turn cycle. Whirler Rogue can make multiple creatures unblockable and even increases our artifact count by giving us two Thopter tokens when it hits the field, which is great with those blink and bounce effects we just mentioned.

Since our commander incentivizes playing artifacts, we also have a few that grant evasion. Team Pennant has been a fantastic recent addition. Trample gets us through chump blockers, and vigilance is great for providing defense, and on top of that, we're likely only Equipping this to a token in the first place, so we get that sweet discount. O-Naginata gives trample with a decent power boost. Golem Artisan can give our Constructs flying, trample, or haste at the cost of two mana and can even boost their power and toughness. Hot Soup is easily the fan favorite in this deck and opponents who have misgivings about playing against an Urza deck tend to relax when they see this one "comin' through!"

*You may have noticed that earlier in this article, I stated that, "none of the cards [in this deck] cost more than 25 cents." To that end, I use the prices found on CardKingdom.com because they have a $0.25 minimum, which makes it easier for me to keep track of price fluctuations. If a card is suddenly more than that, I usually try to find an alternative card to play until the original card comes down in price. Because of this, I have even found that I enjoy using a few cards that I wouldn't otherwise have slotted into the deck. On very rare occasions, I do make an exception, and Hot Soup is one such exception. At the time of this writing, it is $0.39, but it was at the right price when I built the deck, and it has brought amusement to the pods it has shown up in, so I feel that it is still keeping in spirit with the "Power Sink" that we're going for. If the price happens to spike majorly, I would likely rethink it remaining in the deck.

Those are the gears of the gumball machine! I've played this deck for about a year now, and it's a blast to play. More importantly, people have enjoyed playing against it. If you didn't believe me before, hopefully you do now. A fun and fair deck is possible with Urza!

Of course, this is by no means the only way to play a powered-down Urza deck. Voltron is a fine option for Urza since each piece of Equipment is also another mana source, and that token he makes is a buffer against the sacrifice effects that tend to be the Achilles' heel of that strategy. You could even build Construct tribal. There are only 129 legal Constructs in mono-blue, but among them are tutors, recursion, and even a couple lords. Most Commander tables are going to chuckle at somebody choosing Construct for their Adaptive Automaton. Heck, you could even build an Urza theme deck. He was a driving force for much of the early story, there are plenty of cards depicting him.

I hope you enjoyed this take on a powered-down Urza deck. What did you think of the idea? Do you have any cool ideas for an Urza deck? Maybe there's a commander you would like to see get the "Power Sink" treatment. Put your 25 cents in the comments and give me something to chew on!