Pure // Simple - Outside the Pie 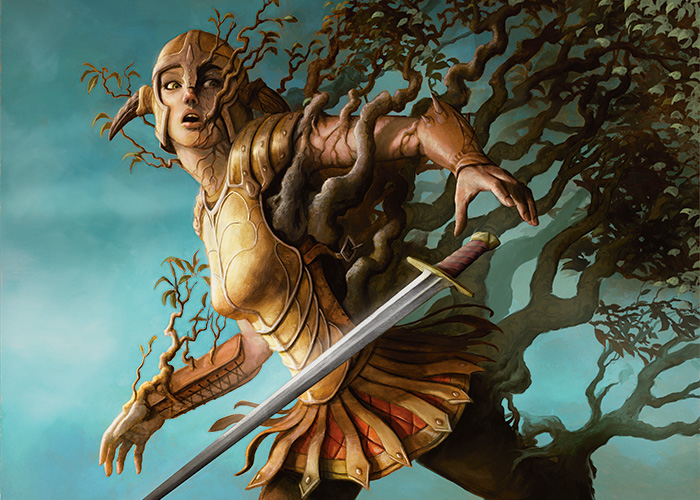 Welcome back to Pure//Simple, the article series that tries to take the mystery out of card choices. Knowing what cards are good in Commander is one of the first steps towards becoming well-versed in the format, but knowing why certain cards are good is even more important.

Sometimes, after building a deck and playing a few games, you find that the deck has some holes that your opponents exploited on their path to victory. So, now you want to make some changes. However, depending on the color(s) you play, you might find yourself beholden to the weaknesses of the deck’s color(s). Of course, some of this is part of the game, as each color has its strengths and weaknesses, it’s part of what makes the game fun. But that doesn’t mean you shouldn’t look for cards to at least make the hole in your gameplan smaller.

To do this, though, you may have to go deep into the Magic cardpool to find the perfect fit. Here are a few suggestions to help you out. No one expects Mana Tithe. And even if they say they do, they really don’t. Mana Tithe has been somewhat of a “joke” in the community, in that when a person has one white mana up, people mention the possibility of that player having a Mana Tithe ready to stop a game-winning spell out of nowhere, instead of the expected Swords to Plowshares. A well-timed Mana Tithe is a thing of legend. It’s best when it is completely unexpected, so if you’re playing this, you have to make it seem like you don’t. That, or play it in a deck with Sunforger. Nothing about this card screams “blue”. If anything, this card should be black, green or possibly red. But wow, is this versatile in blue creature decks. Usually, blue has no real way of “going wide”, essentially being able to attack with a large swarm of creatures, besides a large Chasm Skulker dying. Homarid Spawning Bed makes it so you can have a large board if you need it. Making creature tokens is very useful in Commander since they can help stall the game, make it hard to attack you, are useful for when you need to ensure those last points of damage get in, and are awesome with Skullclamp. Plus, you never have to worry about losing your biggest creatures, since you can just cash them in for tokens when someone points a Swords to Plowshares your way. There are two things that black has problems dealing with - artifacts and enchantments. For the most part, black has to resort to colorless options like Oblivion Stone or All is Dust. But, a card from way back in the early days of the game, Gate to Phyrexia, helps get rid of pesky artifacts each turn. Of course, you’ll need some expendable creatures to get the most out of this enchantment. Lucky for you, black has plenty of great options like Reassembling Skeleton and Bloodghast. If there’s one thing red loves to do, it’s attack, attack, attack. So, since when did red want to stop others from doing the same? Welcome to the infancy of Magic, where the color pie wasn’t well established. Of course, Glacial Crevasses does a Fog effect in a very red way, requiring you to sacrifice lands to do so, but it’s still something that red normally can’t do. Best thing about this card is that you can stick it on the board and it makes opponents wary of attacking you in the first place, since they know you can do that at any time. It’s also a great political card since you can help out an opponent potentially taking some damage, for something in your favor.

Song of the Dryads Mark Rosewater, the head designer of Magic, and the de facto face of the game, has said, on record, that Song of the Dryads is outside of green’s range. That’s how you know it might be good. Song of the Dryads does not disappoint. Similar to Beast Within, a card that itself is close to the edge of green’s slice of the pie, Song deals with just about everything you can imagine, from planeswalkers to lands. Nothing besides instants and sorceries are outside Song’s range. One of the best things about Song is that you can easily shut down an opponent’s commander in a way that doesn’t allow them to simply recast the creature. It just sits there being a tree forever.

In fact, I use Song of the Dryads as a key piece of removal in my mono-green spells deck. I built this deck with a simple restriction: I could not play any creatures (outside the commander) and all the non-land cards needed to have green mana symbols. With a restriction like that, it's almost required to find cards outside the pie.

Cards like the ones mentioned above don’t come out in the game that often, so it’s important to note when they do. Luckily, Amonkhet has a card that fits the bill. Time Stop effects are sparse and almost always in blue. Ending the turn could be one of the most powerful effects in the game, since it can act very similarly to extra turn cards like Time Warp but does so much more, since you can end your opponent’s attack after they have already declared them attacking, but before taking damage. Ending the turn also acts as a Counterspell since you can respond to whatever your opponents cast by exiling everything on the stack. Notice how all the cards I mentioned are blue? So now red can do something similar, of couse, like Glacial Crevasses in a very red way. Glorious End gives you one last turn to win the game. Think back to how many times you have thought “If I only had one more turn. . .”, well you can now find out for three mana.

Unexpected cards that blur the boundaries between colors can lead to unique games that will be talked about by your playgroup for years to come. They’ll talk about that time that Glorious End or Mana Tithe came down at the right moment. Or they might remember when Song of the Dryads or Gate to Phyrexia took out something they were hoping to hold on to. Or perhaps that time when you got aggressive with tokens from Homarid Spawning Bed or stopped a series of attacks with Glacial Crevasses. In any case, covering up that hole in your deck can lead to lasting memories.