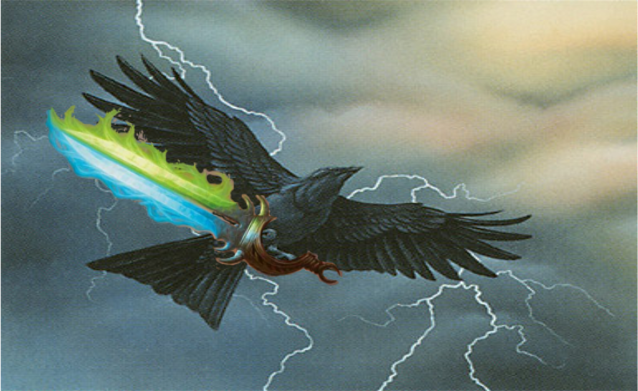 Greetings everyone, I'm back once again to highlight deck construction through the use of Pyramid Theory. This time I want to focus on themed decks. A themed deck is a deck which is build around a theme, rather than a commander. Tribal decks are some of the most common examples of this. Some other possible examples include decks built around lore, a specific mechanic, or card art. Basically themed decks can be designed around anything. A common heuristic that is over represented in the commander community is that themed decks are under powered. While many themes may have their limitations, a properly constructed theme deck can be as powerful as almost any other strategy. This article's goal is to illustrate how to create a fully powered themed deck that hold its own in a game filled with powerful commanders.

Today's theme is Caw Blade. Caw Blade was arguably one of the most powerful Standard decks of all time and was so oppressive that it eventually led to the banning of Jace, the Mind Sculptor and Stoneforge Mystic in Standard. The power of the deck came from the card advantage engine of Squadron Hawk, used in conjunction with Jace's Brainstorm ability, allowing you to essentially draw an additional three cards a turn. Stoneforge Mystic was used to find powerful finishers cards like Sword of Feast and Famine and Batterskull. Games commonly ended with a sword-weilding hawk. I want to build a Commander version of this old Standard deck, one where the primary win condition is, naturally, sword-weilding birds.

As always we break down the deck, working our way through each step of Pyramid Theory. For a more detailed explanation of these steps please see my first article on the subject.

When building a themed deck, inspiration is everything. Sometimes you sit down with a solid theme in mind, while other situations require a bit more exploration and refinement before beginning the deck building processes. I find that inspiration often comes from the strangest places. I've seen some crazy themed deck, and even created a few myself, and here are some important things to think about when you find an interesting theme. You should ask yourself if the deck you want to build is even possible. Some themes may be too limiting to build a 100 card deck around. While the idea of Noggle tribal (donkey-folk) may sound hilarious to you, considering there have only been four Noggles in all of Magic, the deck has no legs to stand on. If the deck isn't possible, you can considering modifying the theme, or combining a few different ideas to strengthen the theme. Maybe you just love Noggles and want to show them some love, so you create a deck build around a bunch of unsupported tribes, an island of misfit toys so to speak. Now that's an idea that could get off the ground. It's important to ensure that our theme is strong to ensure we have plenty of options.

The inspiration for my Caw Blade deck came from a part of Magic's history. Caw Blade however is a narrow theme, with only a few cards associated with the deck. Therefore, I need to diversify my themes as I build to ensure my deck is robust enough to have good play experiences. When we create the goals for our deck, we will have different parameters than those of other decks. We want our opponents to fully understand what the deck's about without having to say anything about it. We also want to establish what the overarching goals of the deck are. Is this themed deck designed just to have a few laughs, and have fun, or will this deck have all the enablers to make it powerful? Understand from the beginning that you will likely need to make some concessions regarding power level or theme one way or the other.

For my caw blade deck my goals are fairly simple. I want to play the key cards from caw blade, and kill people with swarms of birds carrying swords. I've chosen Derevi, Empyrial Tactician as my commander for this deck. She is one of the best birds ever printed, fits into our theme, and has some cool tricks associated with her ability. I also think she is powerful enough on her own that we won't have to concede much in the way of power level. However, I do want to make this a fun deck to play with and against, hence I will avoid the traditional stax effects commonly played in Derevi strategies. A Commander in Form and Function

We want our commander to be emblematic of our theme while also serving to propel us to victory. In this way our commander can mitigate some of our theme's potential drawbacks. For example, I'm trying to replicate the feeling of playing with Caw Blade. Derevi is the perfect commander for this strategy, because she is a commander in both form and function. She unites our themes, while also being a powerful tool for victory. Her ability allows us to be mana efficient, and has synergy with evasive creatures. In this way the deck is both a top-down Derevi deck, and a themed deck. While building a themed deck it is important to strike a balance between powerful cards and theme-based cards. Take time to ensure your commander has as much utility as possible, while not betraying your theme or goals. As we build our themed deck we need to nail down all the various themes and sub-themes. This involves looking at each individual theme in-depth, and deciding what cards are most advantageous to our strategy.

Derevi has a few different sub-themes to consider: tribal elements, equipment, and anthems. For the purposes of this article I'm just going to focus on the deck's tribal elements. For tribal decks you may want to consider looking at every single member of the given tribe to understand all of your options. For example, there are apparently 185 on-color birds in all of Magic. This is good because it allows me to be more selective in my choice of avians. Some tribes don't have this luxury, and you are forced to play almost all of the available creatures. I think it's important in tribal decks to not overdo the theme. You want to have a normal amount of creatures for the given strategy. Don't feel compelled to play bad creatures if you don't have to. For my Derevi deck I managed to narrow the 185 birds down to just 30. I'm playing a few weaker birds like Squadron Hawk and Storm Crow for obvious theme reasons, but on the whole, I have decent creature quality. You also want to take advantage of any tribal cards that can increase the power level of the deck. I highly suggest combing through Onslaught block for tribal cards, since it has cards for many underrepresented tribes. There you can find many gems such as Seaside Haven for instance. Theme decks often have a common problem in ending the game quickly and concisely. To avoid this we look to establish our win conditions during this point in the deckbuilding process. We want to evaluate what we have in abundance and think about how that can translate to winning a game. Many tribal strategies win by swarming the board and casting Overrun effects, while other themed deck may have combos to win the game. This is a point of the process where the strength of your theme is tested. Does your theme have it's own self-contained win conditions, or do you have to stray off theme to win games? These are the questions that can make designing a themed deck difficult, but just continue referring back to your goals to ensure you're happy with your deck's direction.

In my Caw Blade deck I foresee two potential win condition, commander damage, and attacking with a legion of flyers. Equipment and anthems are instrumental to both win conditions. Filling the Gaps, and Mana Base

Filling the gaps in themed decks is essentially the same as any other deck, so long as your theme doesn't restrict you from play the common Commander staples. You will always want a healthy mix of ramp, card advantage, and removal, the particulars of which may be theme dependent. Similarly, most themed decks require nothing more than your average mana base. If you want more information on the particulars of these two steps in Pyramid Theory, I recommend that you read my first article where I break down each step in the process.

Analysis and refinement can be difficult with themed decks partly due to the lack of quality replacements. Often times you want to replace a less powerful card that is on theme, but find that your theme provides limited options. How do you improve your deck without sacrificing theme? I advocate adding more mana efficient cards, lowering the curve, and adding cards that facilitate card advantage. These strategies can help to refine a deck, if a lack of power is your issue. They also are unlikely to sacrifice much in the way of theme. As always, with any deck it's important to always be looking for ways to improve upon what you have already created.

I hope this installment of Pyramid Theory 101 has been interesting and helpful for you. If you have any questions feel free to reach out to me.