Ranking Every Land with EDHREC – 2019 Edition 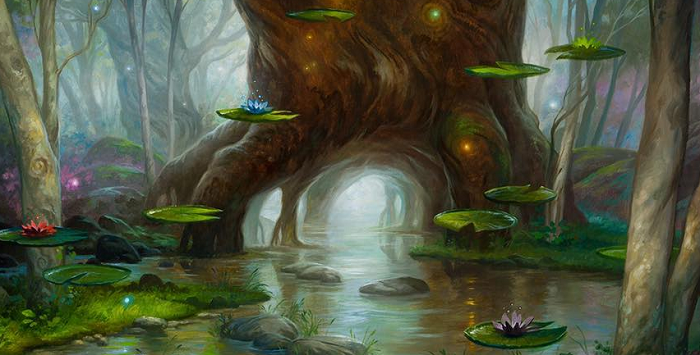 Normally in this article series, I rank every land in Magic based on how many decks they're included in on EDHREC. However, due to a variety of factors, most of the lands that came out this year were not on that list. So because I am a huge junkie for "best of 20XX" lists (and because I want an avenue to talk about Field of the Dead) let's take a look at how the lands from 2019 stack up.

No more talk! Let's speed-run through 2019, starting with the worst land of the year.

How many of you remembered this card came out this year? I don't blame you. It's not like snow decks need more snow lands when every single basic they play taps for snow mana. They also don't really need creature lands, so while the ability that prevents creatures from untapping is cute, it's clear why this is chilling down here with Rhystic Cave.

Over, Under, or Just Right? Just Right: The 14th-best snow card.

These poor Eldraine common lands, overshadowed by other members of the cycle..... A year from now, no one is going to remember what these cards do. Only triggering when you control three basics of the corresponding type basically restricts these to mono-color decks, and the abilities on these ones are pretty subpar.

Over, Under, or Just Right? Just Right: I sometimes think about playing Dwarven Mine in Wort, the Raidmother, but it just doesn't seem worth it.

I know what you're thinking: "Oh joy. Another Unknown Shores." And yes, it is, but this one is at least playable. Let's not forget that Unknown Shores is in over 2,000 decks, and this card is just better in every way. Look at it like a utility land. It's basically a double Llanowar Reborn that also fixes for five-color mana if you have to. I'm not saying this is a great land, but I'd put it in the category of 'just barely playable'. Certainly better than Unknown Shores.

Over, Under, or Just Right? Underplayed: It's even okay in colorless decks

Not a lot to say here. It's good in Knights tribal, but not anywhere else. I don't know why they put "Equipment" on this card. There’s not many colored Equipment. I guess if you really need to cast that Crystal Slipper on time.

Over, Under, or Just Right? Just Right: I think this card is the second tri-land that isn't part of a cycle. I leave figuring out what the first tri-land to do this is as an exercise for the reader.

I'm surprised the entire cycle of Castles cracked 1,000 decks. I suppose if you're in mono-color decks, you might as well play these. They enter untapped almost every time, and none of the abilities are useless. None of these three Castles excite me, but I don't see a good reason not to run them. I expected middling numbers for these, but apparently people are crazy excited to put these in decks, or opened enough packs to randomly get one of these.

Over, Under, or Just Right? Just Right: Similarly to the legendary Kamigawa or Legends lands, I wouldn't go out of my way to find these, but if you own them, you aren't making your deck worse.

Triggers enter-the-battlefield effects off of commanders like Gonti, Lord of Luxury? Check

Jank potential with commanders like Phage, the Untouchable? Check

Appeals to Spikes by being a busted combo piece in decks like Zacama, Primal Calamity? Check.

Over, Under, or Just Right? Underplayed: The only thing I can figure is because it's from a Commander precon set, some people don't know it exists!

Every time I look at this card, I am deeply underwhelmed, but every time I try to come up with a reason not to play it, I come up blank. Sure, it's glacially slow, only works late-game, and there's a ton of lands that do way more than this card, but decks need card draw. Colorless, mono-white, mono-red; these decks need this card. There's little cost to playing it, and these decks don't mind if they get flooded. I can grumble all I want, but I probably should be playing it.

Over, Under, or Just Right? Just Right: I will absolutely blame Cryptic Caves when I draw my 14th land off of it, though.

I'm not a fan of this card. The obvious comparison to Witch's Cottage is Mortuary Mire. Witch's Cottage has to be in a mainly black deck to get the most advantage of it, whereas Mortuary Mire can go in any black-inclusive deck, which means more commanders like Aminatou, the Fateshifter or Yennett, Cryptic Sovereign can take advantage of this card.

There's just nothing in mono-black that cares about the top of your library, and when you aren't abusing it, "top of library" stuff is really bad. In most cases, you don't get access to the creature until next turn, and it's clearly telegraphed what your plan is. You could play a real land like Spawning Pool. Even the stupid Cryptic Caves is better than this. This just feels so slow.

Over, Under, or Just Right? Overplayed: It looks okay, but actually talking through it, it just seems bad.

Unlike the other three Castles, I think people were sleeping on these two. I still wouldn't consider these outside of mono-color decks 95% of the time, but these effects are decent. Locthwain looks like it will hurt, but often you're not drawing when you have five cards in hand. However, when you have two or three, you're definitely more willing to pay a couple life to draw some extra cards.

Vantress is amazing! Scry 2 is a perfectly fine mana sink on its own for control decks to use spare mana on, but there's also so much synergy with it, from Jalira, Master Polymorphist to Future Sight to Temporal Manipulation. I might even consider this one in non-mono-blue decks, with the heavy asterisk that you should just assume it always enters tapped.

I said that the average of this cycle was much higher than Horizon Canopy, but as it turns out, they're almost identical. Whoops. Guess those price tags are more restrictive than I thought, which is a shame. These are up there with Shocks and Battle lands as some of the best dual lands in Commander. Untapped mana that hurts but also replaces itself late-game. They're Cycling lands fused with pain lands. What's not to like?

Over, Under, or Just Right? Underplayed: Twilight Mire sees twice as much play as Nurturing Peatland but costs the same. Something needs to happen here.

It's amazing what the word "hexproof" can do to a card. Lotus Vale is in less than 1,000 decks, and Lotus Field is in almost three times that many. I don't need to tell you why this card is good. This card was hyped to here and back so much, I'm surprised it's this low on the list. Lands decks, sacrifice decks, untap shenanigans with Kiora's Follower... the only place I don't like it is when folks treat it as soft ramp. Listen, the one time you have Brought Back in hand does not make up for the ten times this is in your opening hand with no third land.

Over, Under, or Just Right? Just Right: The amount of Yarok, the Desecrated decks playing this card has grown from 30 to 60. Send help!

You know I joke about these lands with basic land types being pretty lackluster, but when they swing too far the other way, suddenly everyone is playing Polluted Delta in their mono-blue deck to put a Time Warp on top of their library every turn with Meloku, the Clouded Mirror.

If you don't have fetches, the Island subtype will basically never come up, but in mono-blue, who cares? That top of library clause is an easier pill to swallow due to the high card draw and synergistic cards like Precognition Field.

Over, Under, or Just Right? Just Right: Outside of mono-color, I wouldn't try it. Seems like it would enter tapped too many times.

It is truly amazing that a slightly better Evolving Wilds is this expensive. I usually prefer untapped mana in my early turns, but this has upside later, which is cool. Another land among many for Titania, Protector of Argoth.

Thing is... it's $20. It's a fine card, but $20??? For a rare in a Standard set that is a slightly better Evolving Wilds after turn three? I'll give this one its due, but don't feel like you need this land when it'll still play exactly like an Evolving Wilds on your first turn.

Over, Under, or Just Right? Just Right: Call me when it rotates out of Standard and the price plummets.

The dreaded specter of the 'top of library shenanigans' returns again, but I won't deny that a repeatable way to get any enchantment back for this little mana at instant speed is very appealing. I'm certainly sold on this in Enchantress-style decks that can draw a ton of cards like Tuvasa, the Sunlit. These decks can mitigate the card disadvantage and sometimes draw the returned card in the very same turn. In random enchantment decks like Alela, Artful Provocateur? I don't know. It's just so clunky, but I see the potential. I'll give the cautious okay.

Over, Under, or Just Right? Just Right: A year from now I might change my mind, but I've had my soul crushed by Academy Ruins enough to know how good these can be.

This is definitely my favorite land of the year. Now ramp decks don't have to worry about playing things like win conditions. Suddenly, ramping forever can actually just win you the game. Stuff like Sylvan Scrying not only finds reactive answers but can now find a proactive win condition besides Dark Depths. Cards like Splendid Reclamation that could provide a ton of ramp might just accidentally win you the game when you cast them. It's a tapped colorless land, so I won't say there's no downside, but how many lands can you say are also active win conditions? I am very happy this card is in the top 100. It's in my top five lands of all time.

Over, Under, or Just Right? Just Right: I've even considered putting this in my mono-blue deck.

This card will probably crack 10,000 decks less than a year after it's been released (and heck, probably will have done so by the time this article is published!), which puts it in the realm of a Commander staple. There's not even that much to say about it. It doesn't fetch for dual lands, but it does still fix your mana, and can even get snow basics if you like. Plus you don't need to spend a fortune on Shocks to make this card work. Just like Fabled Passage, the only thing holding it back is that price tag. Again, don't feel like you need this to play Commander when budget alternatives already exist. Still, this is definitely worthy of the title "Best land of 2019."

Over, Under, or Just Right? Just Right: And I, in my foolishness, thought this would be a budget card. Oh, how naive I was.

And that's a wrap! Did I do these lands justice? Did I miss something cool with one of them? Let me know what you thought about these lands in the comments. Next week, back to our regularly scheduled programming.