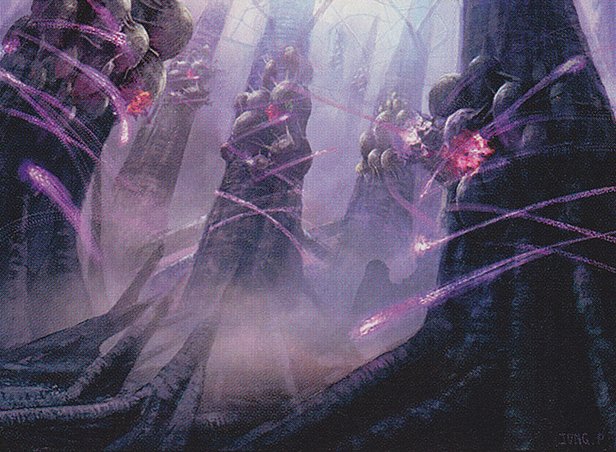 I Have an Announcement!

Wizards recently announced their new Secret Lair project after releasing an announcement that they would announce something about this product. So since Wizards can keep people in hype forever, I figure I should, too.

Hey everyone! I'm announcing that the next paragraph is going to be an announcement about a thing I'm doing soon.

I'm going to write an article next week where we continue ranking every land in Magic based on how many decks they appear in on EDHREC! Like I do every week! Truly, this was worth the anticipation I put you through. More details on this article to come in the following weeks.

The number of situations where you want to spend your turn paying six mana to make three random 1/1 tokens that do nothing is...low. I know someone will mention that the three tokens can be sacced for mana, but if you have the available 6+ mana to sac the land in the first place, what do you need the three extra mana for? The only decks that could maybe play this card are colorless decks because they could probably make enough mana to crack this before breakfast, and maybe Mazirek, Kraul Death Priest decks are hungry for sacrifice triggers. Even then, the effect is just so 'meh' for how much it costs.

Over, Under, or Just Right? Overplayed: I'm mainly rallying against the non-colorless decks playing this. The colorless decks just need lands that tap for colorless, so I guess they can run it, but no one else really has need of it.

Oh, Serra’s Sanctum. Do you know how many decks I’d put you in if you weren’t on the Reserved List? So, so much jank.

Somehow a land that can easily tap for 5+ mana and is over $100 is only the third best card in the Academy cycle from Urza's Saga (and even saying it's the third best is debatable: Phyrexian Tower is sneakily stellar). Do I need to explain why this card is bananas? It's not like an Enchantress deck needs this card to function. In some ways, Enchantress decks don't have a ton of mana sinks like creature decks or artifact decks. But does any deck not want a land that can tap for 3+ mana? Didn't think so.

Over, Under, or Just Right? Just Right: Daxos the Returned. Mmmmm. Your salt is delicious.

I have a Dragon deck with this card in it. I don't think having a counter on this has ever mattered. I was pretty harsh on the storage land cycle from Time Spiral, but I don't hate storage lands like this. I think they're overplayed, but some decks can take time off to put counters on the storage lands for late-game value. Every turn in a Dragons deck is either spent casting ramp spells to help cast Dragons, casting said Dragons, or drawing cards to find more Dragons. "Late game" isn't really a term these decks understand. It takes two turns before this ramps you by one mana, for one turn. That’s a really bad deal, and the worst part is that Dragons can be some of the most chromatic tribes. They're usually between 3-5 colors, so playing a derpy colorless land is super clunky.

Over, Under, or Just Right? Overplayed: I still need to pull this out of my Dragon deck. Eh, I’ll do it later.

I guess I never actually talked about the Future Sight “cycle” of lands. This cycle was supposed to be five lands from five different cycles in hypothetical future sets. For example, Graven Cairns was in this cycle, and then in Shadowmoor, they made a cycle of lands to go with it. I thought Wizards had completely forgotten about this cycle, but just this year, they made an enemy-color version inspired by Horizon Canopy. So screw you, Canopy! You’re not unique anymore. There’s a whole enemy cycle of your type now! Go back and hang out with Graven Cairns!

It's actually really funny to compare Horizon Canopy with the enemy-color versions. I know it may have felt like forever ago, but Modern Horizons is less than six months old. Canopy is over ten years old. Yet, despite the head start, Waterlogged Grove, Nurturing Peatland, and Fiery Islet are already above Canopy, with Silent Clearing and Sunbaked Canyon not far behind. Obviously there's a little bit of an advantage in being released in a recent set, but the main reason is that $30 price tag. Sure, it's neat to be able to cycle these late-game, but if you're already running something like Sunpetal Grove, it's not worth $30 to upgrade to this.

Over, Under, or Just Right? Just Right: There's sometimes this perception that Commander players have just stacks of expensive foil cards to put in their Xiahou, Dun, the One-Eyed deck, but the data on things like this really shines a light on the fact that most people aren't high-rollers.

Today's theme is apparently lands that take a bajillion mana to get value out of. I really don't like this thing. I think I'll get flack from this one because I know how much Commander players love card draw. Look, I like a Harmonize or a Rhystic Study as much as the next guy, but there's a limit. I know this will be hard to hear, so please be aware there's always help out there, but you actually have to do more with cards than just draw them. Like, maybe cast them. Even if you can crack this land as an emergency in the late game when you've maybe run out of cards, the mana cost is so high that you're basically skipping your turn. And if you think the opportunity of running a nonbasic land is low, so there's no reason not to play is just in case of emergency, well, tell that to Mystic Sanctuary and Caged Sun.

Another member of the Future Sight "cycle", but unlike Horizon Canopy, I don't think we’ll ever get cycle like River of Tears. It’s not super flavorful for other colors, and it does have some memory issues. How many times in a Commander game have you heard the phrase, "Did I play a land this turn?"

Which is kind of a shame, because this land is excellent. It's almost an auto-include in any deck with blue and black in it. The worst case scenario with this card is that's it's basically an Island. That's fine. When you do have lands, this is a untapped dual land. You can tap this land before you play a land so you have complete control when this produces black mana. Early game, you're hopefully playing a land every turn, so this is basically an untapped dual land with no downside. For two dollars! How does this not see more play?

Over, Under, or Just Right? Underplayed: Budget players, this card is excellent; get it while it's cheap!

Commander is such a crazy format. Mishra's Factory is such a good creatureland that it's still seeing play in Vintage due to how cheap it is to activate, not to mention it has the ability to pump itself. In Commander, though, it's just outclassed. It doesn't have flying like Blinkmoth Nexus, and Inkmoth Nexus, and it doesn't have all creature types like Mutavault. I'd even play some of the Urza's Legacy lands like Spawning Pool and Faerie Conclave. The big advantage here is price: at 25 cents, this is a steal for budget decks, and it's still only one mana to activate for an artifact creature. That's got synergy with loads of stuff.

Over, Under, or Just Right? Just Right: It's even got synergy with Mistform Ultimus.

Oh, hey! Speak of the devil. The obvious question here is, "Why run this over the much cheaper Inkmoth Nexus?" The only difference is that small little keyword: Infect! Hoo, boy! Isn't that just a totally fine mechanic that no one has strong feelings about or hates with a fiery passion?

Lots of people really hate Infect. Some EDH players allege that dealing 10 Infect damage is not particularly fair in this format. I'm going to put 85% of the blame for this on Triumph of the Hordes because that card just makes winning the game trivial with almost any board. All the other Infect cards might kill one player quickly but scale terribly in multiplayer. There's, like, Blighted Agent and Skithiryx, the Blight Dragon, and that's it. Maybe Phyrexian Crusader? The stuff that grants Infect to creatures is more impactful (such as Tainted Strike) but then again, if your commander already has a lot of power, sometimes double strike can achieve the same effect. Triumph of the Hordes is pretty great, but you know what, Craterhoof Behemoth is, too. Fight me Let me know what you think. I honestly don't think it's that backbreaking.

Back to Inkmoth Nexus. Does Infect make the card that much better? There’re some cute shenanigans here with Noyan Dar, Roil Shaper, but there's not a ton of stuff like that. When Awakening of Vitu Ghazi was printed, everybody started dreaming of putting those counters onto this card, but I haven’t seen it on a table yet. Plus, if you aren't focused on reliably pumping Inky's power, it's just worse than the much cheaper Blinkmoth. Infect attacks on a axis that most decks don't care about, so why not run the creature that deals actual damage, which is more likely to work in tandem with the rest of the damage-dealers in your deck? Plus, then you won’t get hated out of games.

Over, Under, or Just Right? Overplayed: So we have a Blinky and an Inky, I'm still waiting on a Pinky and a Clyde.

Then they made the Battle for Zendikar block with Eldrazi that don’t cost a million mana, and the card tripled in price. It's still kind of awkward to have a land that ramps one mana toward a tribe of cards that mostly cost 6+ mana, but most Eldrazi decks are colorless anyway, so why not run this?

Over, Under, or Just Right? Just Right: I'll take this moment to once again hype the concept of the five-color Eldrazi deck. It's silly, but casting Sire of Stagnation into World Breaker into Distended Mindbender into Decimator of the Provinces sounds pretty good to me.

The point is, the market is not high for these. There's basically only one place for it: colorless decks. And in those decks, it's fine. This enters untapped so there’s very little downside to running it in the colorless deck. I love me a Cycling land, so why not let the colorless decks get in on the fun?

Over, Under, or Just Right? Just Right: Even if you’re on a budget, you can probably grab one of these for around the price of a Wastes and I’d run it in most cases.

Rats and Blast it All!

Well, I'm going to leave you in anticipation about what new amazing announcement I'm going to make. While you're waiting, let me know what you think about this batch of lands. Is Infect better then I thought? Did you build five-color Eldrazi, yet? Let me know in the comments. Till next week!