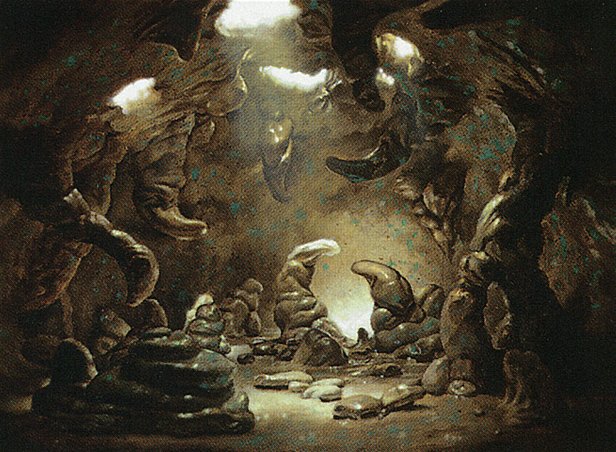 The holidays have arrived! It's time to relax and connect with family and friends, and what could be a more ideal image of family and connection than Magic? In this series, we rank every land based on how many decks they appear in on EDHREC, but this week I'd like to make a special shout-out to the people that truly embody the holidays: the Stax players!

Embrace the spirit of giving by giving your opponents the ability to not play Magic. Witness the miracle of bringing your opponents together in the conviction that your Contamination is incredibly annoying and they need to kill you right now. Make your opponents thankful for their Magic cards by removing their ability to cast them with Knowledge Pool and Lavinia, Azorius Renegade! Truly, I can't think of anything that represents the holiday season better than Restore Balance.

May I present the best creature land for Commander! It's Mishra’s Factory 2.0, and while it doesn't have evasion, it's still totally fine in decks that need it, like Jalira, Master Polymorphist. However, the real reason this is the best creature land in the format is because it should basically be in any tribal deck ever. I don't want to call out everyone's Skeleton Tribal decks, but the tribe is pretty thin on "good" members. You really wanna run Marrow Bats? Then here's a 2/2 land that lets you cast spooky Skeletons that also is a spooky Skeleton. Keeps your deck on-theme while hopefully not having to play Drudge Sentinel. That's without even mentioning the more popular tribes. Stuff like Goblins absolutely want Mutavault as a creature when the deck floods out, giving you one more creature to get pumped up by a Goblin lord.

Over, Under, or Just Right? Underplayed: Playing jank doesn't exclude you from playing good on-theme cards.

Hey! Remember this cycle? We haven't seen this cycle since part 7. Let me recap the other four: if you can reliably turn on Threshold, then you might as well play them, but if you can't, then they do so little and the life loss matters enough that they aren't worth it. I would have been content to lump them all under that banner and have the whole cycle only take up one slot, but here comes Cephalid Coliseum with almost six times the number of decks, ruining the total average of the cycle. Thanks, Cephalid Coliseum, for prolonging the inevitable!

So why is this card so high up on the list? Because the effect is bonkers. Here's the thing: most of the Threshold lands aren't worth the effort of trying to turn on Threshold. If you already have it, activating Centaur Garden is neat, but I'm never excited to give a creature the occasional +3/+3. With Coliseum, I'm almost always happy to activate it. It's amazing card selection. With just one card in hand, it becomes an Impulse on a land. That's excellent even without considering additional synergy. It's a little bit awkward when you have Threshold to put more cards in the graveyard, but if you need to get a reanimation target in the graveyard from your hand, this can do that. And unlike the other four, with blue's high number of instants and sorceries, I would play this in mono-blue decks even without a graveyard theme. The effect is worth the damage it might do early game.

Over, Under, or Just Right? Underplayed: I’m honestly surprised this isn’t more expensive. Grab one now! People haven’t figured out it’s good in Atemsis, All Seeing.

Sigh. The eternal struggle of budget players. Word got out a few years ago that these were decent budget lands, and most of them aren't really budget anymore. I'm glad they reprinted Prairie and Catacombs in Commander 2019; who knows how long they'll stay cheap, but they're perfect for budget players now. Not so much for the other ones, though. Shadowblood Ridge at $3 is tough to justify when you're building a $30 deck, and as for Skycloud Expanse and Mossfire Valley, they're almost as expensive as shock lands right now. If we're talking not budget, you should just run the filter lands like Sunken Ruins. For budget, they’re much better, but most of them aren't budget, and how long will the cheap ones remain cheap?

Over, Under, or Just Right? Just Right: The cop-out answer. As of this article, I would say Catacombs and Prairie are underplayed, but whether they stay that way or the rest of the cycle joins them all depends on whether Wizards keeps reprinting them.

Oh good! Blighted Cataract but with the even worse downside of entering tapped! I did just talk about Cephalid Coliseum, right? Play that every time over this.

Over, Under, or Just Right? Overplayed: Almost through this cycle. One more.

'Random' is pretty annoying, but you can build around that restriction. Just make sure all your targets are good. Colorless decks, for example, have mainly giant spaghetti monsters in their arsenal, and it doesn’t really matter which one you get back. Plus, this enters untapped and can be activated the turn you play it, so even getting a subpar creature isn't that big a deal. Do you like the Cycling lands? This is like a Cycling land that won't draw a random land or useless ramp spell.

Over, Under, or Just Right? Just Right: I don't think it's for every deck, but entering untapped really makes this card. This is a colorless land that I'm fine playing over a basic Wastes.

I kind of wish they would return to this idea of tri-lands with basic land types. I don't know how much it would matter for budget decks, but it would be something neat you could add to tap lands. How much better is Sandsteppe Citadel if it was also a Plains? Probably not much better, but it's something that you can give to budget players.

Having the Forest land type really makes this card. If it were a Plains or Swamp, I probably wouldn't run it over Sandsteppe Citadel. As a Forest, it can be found by cards like Skyshroud Claim and Nature’s Lore, which a lot of decks are playing anyway. The damage will rarely matter since it can always tap for green, so I’m fairly comfortable saying any decks running Sandsteppe Citadel should probably switch to this, if they can afford it. Are you running Vivid Grove? Because I think I'd rather just have this.

Over, Under, or Just Right? Underplayed: I was pleasantly surprised to learn this card is a reasonable $1.50. Not ultra budget, but definitely within the range of budget decks.

Look, Wizards. I get it. Command Tower is printed in every single Commander deck and is somehow still $2. Fetch lands see play everywhere and are pack sellers. There’s only so much you can do when it comes to helping budget five-color players. However, this is the type of card that no other format cares about, and which could be a great boon to budget players. No one else needs a strictly worse City of Brass. Even most Commander players can play a variety of much better lands than this.

Budget EDH players would love this card! If I’ve discovered anything in this series, it’s that people reach for anything to make a five-color mana base work. We're playing Transguild Promenade, for crying out loud! A City of Brass that enters tapped but can tap for colorless would make five-color budget mana way more consistent, but I can’t put Grand Coliseum in $25 or $50 decks because the card is $2. Wizards! No one else would care if they put one of these in each of the 2019 precons, and it would throw us budget players a bone. This is not like asking for fetch lands in the precons. Let us have this one.

Over, Under, or Just Right? Just Right: I won’t ask for anything else for Christmas. Just print these till they cost nothing.

I think this is better than Maze of Ith.

Yeah, Maze of Ith is free, but it also doesn't tap for mana. I'm sure you've seen games where a player dropped a Maze on turn three; that's something you never want to have to do. Kor Haven does not have this issue. It's a land when you need it and a Fog when you don't. Sure, you can't activate Kor Haven early game, but when have you ever activated Maze of Ith early on? I'm sure someone will mention the niche situation where you want to untap your own creature with Maze, but there're some cute things Kor Haven does, too, like stopping creatures from dealing damage in extra combat steps. The one downside is the white pip on the card, but that means it should just be in any white deck. Haven is an amazing card, and it's only 1/3 of the price of Maze.

Over, Under, or Just Right? Underplayed: The further up we get, the harder it becomes to justify calling these lands 'underplayed,' especially for cards that are fairly expensive, but Maze is in 12,000 decks, and Haven should at least start approaching that number.

Is there any colorless deck that shouldn't run this? Running big Eldrazi like Kozilek, Butcher of Truth or robots like Blightsteel Colossus is half the reason you play a colorless deck, and then when you play them, you get a free Worldly Tutor! There's basically no downside for colorless decks.

Not nearly as good in non-colorless decks. Even artifact decks like Jhoira, Weatherlight Captain aren't running a ton of straight colorless spell or tutor targets for this land. It's an auto-play in the colorless decks, and can potentially do work in colored Eldrazi decks (hi, Rakdos Lord of Riots!), but aside from that, I don’t think it’s that good anywhere else.

Over, Under, or Just Right? Underplayed: I would say this is the clear winner of the "Cheaper than a basic Wastes contest," except Pioneer made the card more expensive. Grr.

However, there's a big difference between these beginner lands and all the other cards I mentioned: everyone has these. If you got into Magic within the last couple years, you got these in a Planeswalker deck or an Intro deck. Even if you’ve been playing for longer, you opened one in a pack of Battle for Zendikar, or you found one in a junk box and took it because someday you might need them for a quick mana base. If the option is playing one of these or playing 100% basics, play these! They’re not great, but having lands that can tap for two colors of mana is vital to make decks work. If you have to pick between 'consistent but slow' and 'inconsistent but fast', pick slow every time. Just try to find replacements for these ASAP.

Over, Under, or Just Right? Just Right: I might have a couple of these sitting in decks I own. At least they're better than the Exert lands!

Mutavault Counts as a Holiday Spirit

I wish you the happiest of games this season, full of holiday cheer, good will... and mass land destruction.

What did you think of this week's land lineup? Do you play the Starter Deck lands? Is Maze of Ith better than Kor Haven? Tell me what you think somewhere on the internet, and enjoy your holidays!