Ranking Every Land with EDHREC – Part 26: Salvager of Secrets 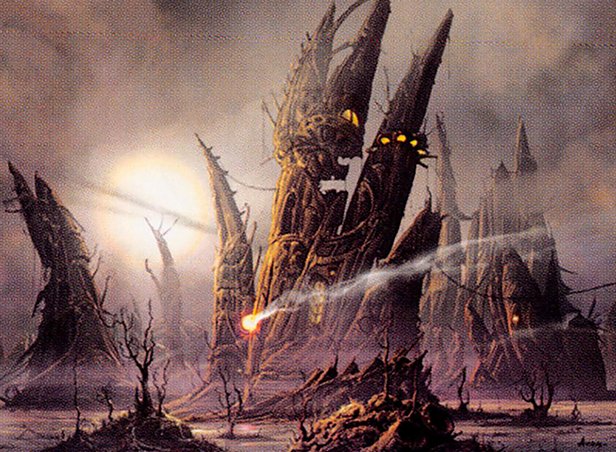 Into the Intro Intrepidly

Welcome back to the wonderful wacky whimsical world where we rapturously rank every random land based on the rigorous research of how many decks each ramping realm has on EDHREC. I rationalize no respective reason why our radically roundabout route cannot rapidly resume. So rise, readers, and raise your reading receptacles, to rejoin this ride with your regularly requisite... um... writer?

Hey, there's only so many words that start with R.

I am 100% blaming this card being so high on the precon effect. Were it not for it being printed in Plunder The Graves under Meren of Clan Nel Toth, this card would probably have sunk down to the 150s, at least. For crying out loud, it's in more than half of all Meren decks!

This is a case where the effect on the card isn't the worst, but the color combination and deck strategy just have so many better options. I can think of color identities that might play a land that said "Four mana, Tap: Draw a card," but Golgari is not one of those. Not only do they have a ton of ways to gain card advantage with cards like Grim Haruspex, but they often are some of the most mana-efficient. They often are synergistic machines that need to keep playing multiple engine pieces a turn and don't often have five mana to derp around with. It's technically a sacrifice outlet, but it's one of the most inefficient you could get. Do I need to remind you that High Market exists, or that one of a million creatures like Viscera Seer can do it for free? I don't think it's unplayable, but I definitely think that there are way way better options for colorless lands.

Over, Under or Just Right? Overplayed: I expect my Golgari-loving editor to either strongly agree or strongly disagree with this assessment.

I always forget these exist. If I'm ever on Jeopardy and the category is "Names of the Lorwyn filter lands," then that would be a super niche category and I'd be quite curious who came up with it because that doesn't seem very scholarly.

Also, I'd be screwed.

I think I often forget about these because, as a Commander player, they're not good enough to be staples, but not bad enough to be cheap. They're fine lands. The filtering can be kinda clutch early on. They transform a clunky turn one Mountain into a turn two Counterspell.

Definitely totally playable, but not nearly the best option. Taking Cascade Bluffs as an example, you have to have blue or red mana before this land does anything, so it's a tough sell outside of two-color decks. Already, that puts it firmly behind the top tier of lands. Your Shocklands and Battlelands should be prioritized first. Now, compared to cycles like the Temples or the Pain lands, the filters are a fair amount better, but the filters are also way more expensive than those cycles, so this is really only for players that aren't on a budget and that already have a good selection of staple lands like the Shocks. If that's you, these are a fine addition to your deck.

Over, Under, or Just Right? Just Right: This is also the last of the Future Sight lands. Good old Graven Cairns closing us out.

I can imagine how this card got made. Dredge was in Ravnica: City of Guilds, and quickly proved to be one of the most broken mechanics of all time. Time Spiral block was just around the corner. The whole point of the block was to call back to a bunch of mechanics from Magic's history. Sure, Dredge was a stupid mechanic, but maybe, if they kept the Dredge cost low and put it on a subpar card like a tapped land, they could get away with making it, and it wouldn't be that good, right?

Let’s ignore the massive elephant-sized frog in the room for the moment. Dredge, as stated above, is stupid. Graveyards can be second hands in Commander, so in decks like Muldrotha, the Gravetide, this is a land with a pretty low opportunity cost to play that says "Return this from your graveyard to hand: Draw two cards." Plus, it being a land gives it a ton of synergy with stuff like Seismic Assault or any sacrifice engines like Sylvan Safekeeper. And it’s also kind of good at milling your entire deck repeatedly with The Gitrog Monster and a discard outlet. That’s pretty good, too.

Over, Under, or Just Right? Underplayed: The one tricky thing is actually getting it in the graveyard, but if you can do that fairly consistently, this card is dumb.

Each black creature? Boooooooooo. Yeah, I know it lines up with the rest of the cycle, but I would play this in so many decks if it was just all creatures in your graveyard. Of course, then it probably would be, like, $30.

For all my complaining, this can make a stupid amount of mana pretty often. It’s only going in mono-black or mostly black decks, but those decks love to fill the graveyard with creatures, and they love to spend that mana on giant X spells like Torment of Hailfire

Over, Under or Just Right? Just Right: If we can't have Cabal Coffers reprinted, can we at least have this reprinted?

In a 40-life multiplayer format, you'd be forgiven for thinking this card isn't as good as it is in other formats, but I assure you, Township is still gross. It doesn't seem great - Cathars’ Crusade makes this card look sad - but this card is great in stalled-out games. Someone can just sit there with a board of three or four tokens or mana dorks, and just keep activating this. Making the board bigger every turn and your only way to not lose is to a Wrath, which feels bad on a bunch of random tokens. If it’s accompanied by any synergy like Doubling Season or Mikaeus, the Lunarch, you might as well just lay on the table and die right then and there. If you’re still skeptical, try it for a while, because I too was skeptical until I lost to it. Repeatedly. Brutally.

Over, Under, or Just Right? Just Right: It’s about in every Selesnya deck, so I can’t ask for much else.

I used to lump the Panoramas in with Warped Landscape as being too slow and clunky for Commander. They do essentially the same thing for the same cost. Untapped land that fixes your mana, but in a slow and painful way. While that's definitely true with this cycle, having played with it, the difference between 1 and 2 mana is enormous. Playing this turn one and cracking it on turn two isn't the absolute worst thing in the world, and late game, it's just an untapped land, so I think they're okay budget lands.

Or they would be, if they ever got reprinted. A dollar for these is insane and completely counterproductive. They occasionally see a reprint in a Commander deck, but these need to be printed into the ground. Without budget playability, there’s not much else here. I’m sure someone will mention that they’re more lands that sacrifice themselves for something like Korvold Fae-Cursed King, but you have so many options that don’t cost mana to activate and enter untapped. The only reason I would play these would be for budget deck, and right now they’re too expensive for even that.

I... did not realize these were a cycle until I started writing this series. Yes, they all have Refuge in the name, and I've seen them multiple times, but I never actually put together there was a theme here. I can't tell if that's on me or the lands for being so forgettable.

I can guarantee that this card would be in way fewer decks if it didn’t have that line about loyalty counters. Being able to get any Planeswalker that much closer to their ultimate is worth the slot alone (And FYI, if they do ever make it so that any planeswalker can be your commander, you can bet your buttered biscuits this card will not be $0.50). I certainly wouldn't play it just to make my commander bigger. Being untapped is nice, but a single counter isn't worth the land slot, especially on commanders that don't like to get into combat. Not that the creature line is irrelevant, just that it’s not really worth doing unless it's with something cute. You know, Hallar, the Firefletcher, or Toothy, Imaginary Friend. Fine for planeswalkers, fine for synergy purposes, but don't play this to make just any ol' commander slightly bigger.

Over, Under, or Just Right? Just Right: There's even some political gain here, by putting counters on opponents commanders.

Reprinted four times in the last two years. That’s more then Grand Coliseum has received in 17! Wizards, come on! Throw me a bone!

This is basically just Transguild Promenade again. I went over that land pretty thoroughly in the last edition, but the CliffsNotes version is that it meets about the bare minimum for playability, but should be replaced with the first decent land you see, ASAP. The one neat thing is that it's an extra gate for Maze's End, which means Crumble to Dust doesn't kill the strategy anymore. That's neat!

Over, Under, or Just Right? Overplayed: It's technically better than Promenade, but not good enough to be in the top 100.

Lifelink and deathtouch together are... kind of weird? I understand having the words "Life" and "Death" together on a card looks cool, but I don't think they work particularly well together. Lifelink works best on big creatures so you can gain a ton of life, and Deathtouch works best on small creatures so they can get through for damage. Kinda counterintuitive.

Regardless, they both work well with Orzhov token strategies. Playing this and having the threat of activation makes blocking anything super awkward. On defense, this can make an army of tokens into a brick wall, killing anything that tries to run through. Then, once you activate it, the Vault can trigger anything from Well of Lost Dreams to Crested Sunmare. It’s pretty expensive, but taking the turn off for these two amazing abilities is often worth it.

Over, Under, or Just Right? Just Right: I could maybe make a case for this being underplayed, but it’s already in almost 7,000 decks. Kinda hard to push for more.

If I Activate the Vault Enough, Maybe I Can Get a Rare Wild Card

I retire my rambunctious rambling for now! Let me know your reasoning on these lands. How good are the filters? Are you up for some more Future Sight lands? Post your thoughts someplace where I can read them. Until we meet again!