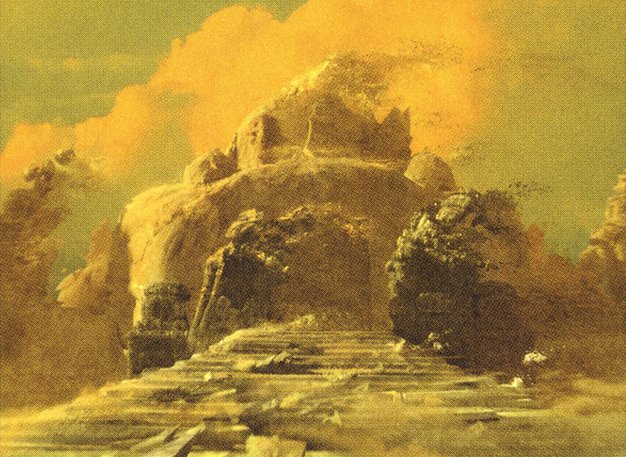 I Seem to Have Fallen into a Deep Pit

Hm? What are you doing here? Didn’t I just write an article?

Wait, what day is it? Last thing I remember is looking up green and white cards with first strike on Scryfall, and I saw this card Nature’s Blessing that I thought might be cute in some sort of combat-based green-white deck that cared about the graveyard. Next thing I know, I’ve constructed some 300-card monstrosity, a green-white token-reanimator concoction that tries to use Reya Dawnbringer and Epic Struggle somehow. I must have lost track of time.

Anyway, here on this series we rank every land based on how many decks they have on EDHREC, so I should probably get back to that. Although... speaking of lands... I wonder if I could run World Shaper in this deck to win with Field of the Dead. That combo works well with the Dredge cards and synergizes with.... Wait, what? Oh yeah. The article.

They don’t fly. They are Spirits that do not fly. This card may appear to make Spirits that fly because Spirits in Magic often fly, but in fact, these Spirits do not have the ability to block flying creatures.

With that out of the way, this is another five-color land with little downside. The Spirits do basically nothing. No one has ever died because of one (I'm sure the comments will prove this wrong), and if people start chump blocking with them, it probably doesn’t matter to you, or you'll have trampled over them, anyway. Some games, it's not even really a downside. Every time someone taps this, it becomes a game within the game where everyone bargains to get the stupid 1/1, with meaningless favors exchanged. Theoretically, you could be at a table with three Edric, Spymaster of Trest decks, but in practice, I’ve never had to give the Spirit to someone who could use it effectively.

Over, Under, or Just Right? Just Right: The $10 price tag keeps it tethered in the 'really good but not a must-have' category.

Mirrorpool may be my favorite land, but Scavenger Grounds is probably the land I play in the most decks, and it just came out two years ago. I play it in everything from Dinosaurs to Izzet artifacts because the principle I champion even more than targeted land destruction is graveyard hate. Every deck will have some sort of Regrowth or Reanimate effect, and this can shut those off without taking up a spell slot. When you slam this against decks like Meren of Clan Nel Toth, it is the best possible card you could have.

The biggest issue with graveyard hate is playing it in a 'real slot' because it isn't particularly exciting, but here's a land that can do it, so now there's no reason not to have some. From what I hear, there seems to a perception that people think it’s scummy, but as someone with many graveyard decks, this is me telling you: play more of this card.

Over, Under, or Just Right? Underplayed: I hope this card eventually gains the same status as lands like Reliquary Tower.

The reception for Arcane Signet hasn't been great. If you're into Commander for the brewing, having a card that's really good in any deck reduces the amount of slots for jankier cards. However, making lands that have no downside in Commander and should see play in every deck that can play them is actually something I wish Wizards would do more often. Mana bases and a good color balance are difficult to build, and if you build them wrong, you’re not going to have a fun time, so let’s lighten that load a little bit. These lands make the average deck better while not stealing a 'real' slot.

Unfortunately, they didn’t go ahead and also print them in the Commander precons (grumble grumble we need more budget lands grumble grumble), but more lands that don't affect tempo would, in my eyes, be a net positive. So long as they remain reasonable, I'd be up for more lands like this. At least finish the cycle.

Over, Under, or Just Right? Underplayed: These numbers are still going up, but I want them to be in as many decks as the shock lands.

Yes, higher then Gaea’s Cradle, Serra’s Sanctum, and the powerhouse of Shivan Gorge, we have Phyrexian Tower. Certainly not as powerful as most of the cycle, but that's not a insult. Look back up to the rest of the cycle. The reason it’s higher than those cards? It’s not on the Reserved List. Yeah, I didn't know that. I just assume any good card from Urza’s Saga is on the Reserved List, but Phyrexian Tower was printed in Ultimate Masters.

Which means I should probably buy one. People are playing High Market as a free sac outlet, which has the added upside of gaining you a stunning one life. How about if you could sacrifice creatures for free and gain two-thirds of a Dark Ritual? What a bonkers land.

Over, Under, or Just Right? Just Right: It’s only $10 right now, and have you read what it does?

I gotta admit, having a land that can become a giant game-ending Demon is pretty tempting. It's a pretty good clock, and it can gain you a ton of life to get you out of a tough spot. Token decks should probably be running this card because it's a way to make a board of small dorks into a finisher.

However, there's something about going all-in on this plan that I just don't like. Sometime you have a thousand tokens sitting around with nothing to do, but if you only have a few? Is it worth it to spend them all on this? Sure, it can't get got by Doom Blade, but it still gets hit by stuff like Into the Roil and Path to Exile. I don't know. I'll give it the okay, but I don't know if I can get over the risk.

Over, Under, or Just Right? Just Right: Color identity on this is black, so no Demons in Phelddagrif.

Today I’m going to say that Wasteland is overplayed in Commander. I don’t know when I obtained the hubris to do this, but I am the king of tangents and EDHREC land stats. Bow before me!

Ahem. It's not that Wasteland is bad; it's just that comparing it to similar effects, I don't see a huge advantage to running it. Unless you're on The Letter 'W' Tribal, you’re just always going to play Strip Mine first, but you're also practically never going to destroy a basic land, so the difference between them is pretty meaningless. Compare Wasteland to Tectonic Edge, and it's a similar story. When are you ever using Wasteland on turn three unless you're in a cEDH pod? And Tec Edge does basically everything Wasteland does after turn three, so again, I don't see a huge advantage to running Wasteland.

It's basically a similar story all the way down. Strip Mine, Wasteland, Ghost Quarter, Dust Bowl, Tectonic Edge, all totally playable options, so why spend $30 on Wasteland? Nothing about the top decks convinces me that the decks that are running Wasteland are significantly better than decks that aren't.

Over, Under, or Just Right? Overplayed: I’m more annoyed that it doesn’t deserve to be this high. If you own a copy, go for it, but don't seek one out.

Hexproof does shut down a lot of ways that black and red can deal with threats, so if you’re trying to do something where you have to target creatures, like Horobi, Death's Wail or Starke of Rath, you basically have to run this. Is it good enough if you’re in an aggro deck and want the ability just in case? I don’t think so. Hexproof isn't unseen in Commander, but it's not an 'every game guarantee'. Plus, you can beat hexproof with other cards: you can Wrath, you can take out the enchantment or Equipment that provides the hexproof, or you can kill the opponent dead. Colorless decks don’t have anything to lose by playing this, so they get a pass, but decks like Daretti, Scrap Savant don't need to faff about with this.

Over, Under, or Just Right? Overplayed: This blogpost becomes more relevant every year.

I like this card, but 11,000 decks? Putting counters on things is very good, especially with synergy like Reyhan, Last of the Abzan, but 11,000 decks!? It's a tapped Forest, and you can't tap it for mana on the same turn you play the creature(s) you'll put counters on, so essentially it's taxing you one mana, like an Opal Palace. I don’t think the card is bad, and folks who make six Elves in one turn are probably delighted by it, but 11,000 decks!?

Over, Under, or Just Right? Overplayed: Doesn't seem worth it in random mono-green decks.

We have seen many budget rainbow lands that people run because the options are slim, and, often, those lands don't really cut it. Part of the reason I think those replacements aren't good enough is because there’s already a cycle of some of the best budget five-color lands, and they're pennies (though certainly still due for a reprint). The Vivid cycle is a must-have for budget three-, four-, and five-color decks. Two-color decks don't need them, and non-budget decks will find these too slow, but in budget brews, a Vivid land is a tapped Command Tower.

Sure, after two shots, these stop being rainbow lands, but two uses of free mana is enough time to cast your Rampant Growth or Joiner Adept. After that, they can still be tapped for one colored pip, which means they're never useless like Aether Hub. Running too many of these can cause issues, but running a couple in every five-color deck is a must for me. They’re often better than tri-lands.

Over, Under, or Just Right? Underplayed: Don’t reinvent the wheel. There’s a great cycle for budget players right here. Just keep them cheap.

I just said literally four lands ago that any of these cards that destroy a nonbasic lands are fine. That's still true for Field of Ruin, and if the choice is no Strip Mine or this, pick this.

However, I'm not sure why this card is seeing so much play. I would think the two mana to activate, plus the $1.50 price tag before reprint, would keep it at least below 5,000 decks.

Are we just that on-board with the upside? Being able to get a land to replace Field is neat, but what about your opponents? Sure, whoever’s land was targeted by Field of Ruin is simply neutral, but there will be two opponents who do nothing and gained a mana for their trouble. Activating this card is basically two mana to Rampant Growth two opponents. That can't be worth the upside, right?

Over, Under, or Just Right? Overplayed: Again, it's not like decks are made that much worse by running this, but I'm just confused.

I Prefer My Fields More Deadly

Well, that's all I got. We cross the big five-zero next week, so let me know what you think about the journey so far. What's your take on the Vivid lands? What's your land destruction spell of choice, and why is Field of Ruin so dang high? Let me know in the comments below. Till next week!