Ranking Every Mana Rock with EDHREC – Part 3: Back to the 90s! 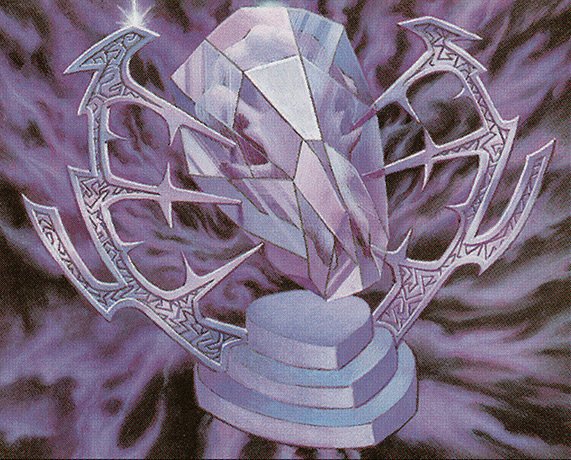 Welcome back to this series where we rank every mana rock based on how many decks they have on EDHREC. It's funny how perspective changes things; I don't know if you noticed, but we actually cracked the top 100 last week. When I was ranking lands, that meant we finally breached the milestone from lesser-known lands to Commander favorites. Here, all it means is that we're no longer looking at complete garbage with some hidden gems, but instead some mostly terrible cards with some interesting stops along the way. I don't know when we're going to finally hit "The Staples". 50? 30? 10? Who knows? Only one way to find out!

With the disclaimer that I have never felt compelled to put these in a deck, I kinda have a soft spot for these, and I don't think it has anything to do with their playability. Even in mono-color decks, I don't think they're better than Commander's Sphere. Making an extra mana is cute, but early on it's probably going to be too costly to sacrifice this mana rock, and, late game, I doubt that the one mana is going to matter much. On playability, I wouldn't say they're unplayable, but I don’t think I’d ever choose them over other options.

But I still like this cycle. It must just be my inner Vorthos. Something about the flavor just hits home for me. The absolutely 90s metal band art, with the black wispy backgrounds slightly colored to correspond with the mana that each one makes, and the mystique of this Dragon that transcends the color pie, having its body parts dissected in order to give us a piece of its power (which was kind of destroyed when Ramos, Dragon Engine became a real card, but shut up). It all comes together to give me this sense of archeological novelty. I wouldn't recommend that you play these, but I'm also going to be pleased if I ever play against one.

Over, Under, or Just Right? Just Right: They aren't bad enough that I'll keep them here for flavor.

Myr tribal is definitely a weird deck, but might be good enough to build anyway. Not because the creatures themselves are any good; most of them are random mana dorks like Copper Myr, or have worthless abilities like Myr Mindservant. The weird stuff is the surprising amount of synergy. It's more than just Myr Battlesphere. Myr Galvanizer can actually make a stupid amount of mana with all the mana dorks. Myr Matrix, Myr Turbine, Myr Incubator, and our friend Myr Reservoir are all really weird payoffs that suddenly give the tribe more options than your typical jank tribal deck. It's not good, but as someone who's not normally a fan of jank tribal, I might build this one.

Over, Under, or Just Right? Just Right: There's gotta be something cute you can do with Arcane Adaptation + Myr Turbine.

I was expecting to just say "Powerstone Shard is very cute in Brudiclad, Telchor Engineer" and move on with my life, but then I started looking at the High Synergy cards on this card’s page. What the heck is going on here? Undercity Uprising? Get the Point? Vizkopa Vampire? Why are there so many random commons from Guilds of Ravnica block? I understand many people start playing from cards they own, but usually those players don’t make this much of an impact in EDHREC stats. They aren't even from the same set. Powerstone Shard was in Dominaria! The only thing I can think of is that maybe Brawl has something to do with it, but I don't know why that would affect EDH stats.

Over, Under, or Just Right? Overplayed: I have no idea what's going on, but I don't think that Knight of the Last Breath and Powerstone Shard should be in the same deck.

In my head, I always make these possessive. It was only from writing these series that I realized it's not actually "Atarka's Monument." It's "Atarka Monument," despite the fact these are monuments to Atarka. Originally, this segment was me making fun of this fact. "Really? Is there a place just called Atarka?" However, I then realized that's no different from what we do. The Washington Monument isn't "Washington's Monument”, so maybe my problem is just with English.

Over, Under, or Just Right? Just Right: Huh? Oh, I have to actually talk about the Magic cards. Uh, six mana for an okay creature isn't enough to make playing a slightly better Cameo worth it. Now, if you'll excuse me, I'm gonna go buy a grammar book.

This is, like, right on the edge of playable for me, but I don't think I'm in. When your mana rocks also have synergy with your deck, that's awesome, but lifegain decks are almost always at least two colors, if not more. Paradise Plume is already a tough sell at four mana, and now you're telling me it's only ever tapping for one mana in my three-color deck? If it costed one less, or could tap for any color, I think it might be good enough, but, as is, I think it's just bad.

Over, Under, or Just Right? Overplayed: Maybe in a lifegain mono-white deck, but even then, it seems too expensive.

This is kind of a weird card in abstract. It's from the Planeswalker decks that are simple preconstructed products for new players, made from mostly commons from the regular set, but with a couple new cards. The face cards of each deck is a brand-new Planeswalker, and each deck also has one card that tutors for that specific Planeswalker.

If you've never heard of these Planeswalkers before, that's because most of them are bad, like our friend Nicol Bolas, the Deceiver, which only sees play because people commit to the bit. It’s not completely worthless, however; in fact, I think it's one of the better ones from these starter decks, but that +3 is atrocious. The best-case scenario is it making each opponent lose 3 life. You will do it once, and then this eight-mana Planeswalker will die. Compare it to Nicol Bolas, God Pharaoh, and it just looks depressing. However, playing any card that says "Bolas" on it is a thing. That's basically the only deck for both Nicol Bolas, the Deceiver, and by extension Visage of Bolas, but if you're doing it, you might as well go all in.

The Borderposts are basically just tapped dual lands that sometimes can be mana rocks. They are worded a little bit weirdly, but since basics always enter untapped, paying 1 for the ability is no different from playing a tap land. The most awkward part about these are needing basics, but even Esper runs a few of them to get with cards like Wayfarer's Bauble.

These are basically just artifact lands, and this alone should secure them more play. Having deck synergy from the resources you have to play anyway is ludicrously good. These don't even take up slots in your deck. When I play these, I count them as lands that sometimes happen to be mana rocks. There's some small downside if someone overloads a Vandalblast, but when that happens in artifact decks, you probably are gonna lose, regardless. If your deck has any synergy at all with artifacts, or colored mana symbols, or anything that the Borderposts can work with, I don't see a strong argument not to play them.

Over, Under, or Just Right? Underplayed: I'm honestly surprised that these are still just 25 cents.

Again with the random Guilds of Ravnica commons. Maybe it's just because all these cards are newish. New players aren't going to be finding new copies of Mana Prism, but it's likely that a new player getting into Commander will likely have opened some Ixalan and Guilds, so maybe that's why these random commons are here?

Over, Under, or Just Right? Overplayed: The story of the weird data stuff is vastly more interesting than a bad mana rock that pings one time. Maybe if it tapped for colored mana, but as is, the tiny bit of synergy doesn’t cover how clunky this card is.

In case you weren't aware, Sol Ring is a good Magic card. Very few decks are going to say no to a Sol Ring. As long as your commander has an activated ability, Thran Turbine is basically a second Sol Ring. Upkeep timing is kinda awkward, as you'll need to decide whether you want to activate an ability right at that moment, so you lose some flexibility, but most commanders that can use this mana, from Grenzo, Dungeon Warden to Thrasios, Triton Hero, are going to rarely not want to activate their ability, and this can do that for a sharp discount, if not free. Totally worthy of way more play.

Up until this point, we've seen a lot of cards worse than Manalith, but Spinning Wheel is the first of something we'll see a lot in this series: the Manalith with upside. In current Magic, a card like Manalith isn't really up to snuff, but something like a Coldsteel Heart is probably a little too powerful for Standard, so the compromise is a three-mana rock that does some small extra thing.

The ultimate question is going to be "Does the upside make this Manalith playable?" Spinning Wheel is a resounding "no". You probably knew that before I even started talking. It’s almost never going to be worth it to pay five mana to tap one creature, but it's cool that we have options to the point where we can do better than a three-mana rock with upside,

Over, Under, or Just Right? Overplayed: Not the worst, but we'll see better.

What's better than a mana rock that costs four? A mana rock that costs four that also doesn't even ramp you! Not only does Khalni Gem do basically nothing in most decks, it's also really risky. Bouncelands like Simic Growth Chamber always have this looming downside if someone blows up the bounceland. Khalni Gem laughs at that small setback, and might actually just lose you the game if it gets destroyed. That said, if you're on Dramatic Reversal + Isochron Scepter, or something else that demands nonland permanents that tap for mana, you can consider this, but even then, the potential to shoot yourself in the foot seems far too high.

Over, Under, or Just Right? Overplayed: I guess it's also cute in Hokori, Dust Drinker.

Speak of the devil, another Manalith with upside! This is kinda like the modern rendition of all those totem. A three-mana rock that can be a creature when you need it to. As said with the totems, it's really only worth it to play this when you have synergy with the creature like Jalira, Master Polymorphist, but when you do, this is a fine option. I think in a mono-color deck, I'd just play the respective totem because it's cheaper and the creature side is better, but in non-mono-color decks that also have synergy with creatures, I'm happy to play this. Kinda niche, but useful to have.

Over, Under, or Just Right? Just Right: I had nowhere else to say it, but the art is excellent!

The Ichor is Slick-or Than Water

Well, I can say for certain, this is not the part filled with staples, but there was some good stuff here. Are you a fan of the Borderposts? Can you explain what the heck these Guild commons are doing? Let me know this and whatever queries you have in the comments! Until next week!