You're the PI (principal investigator) of the Library Dissipation Lab - a state-of-the-art laboratory that specializes in finding ways of making libraries disappear as fast as possible. You've received major funding to help you achieve this, including the Mana Vault for scientific research grant, the Mana Cryptocurrency foundation's fast-track project completion grant, along with major commendations, like the Jeweled Lotus and Lion's Eye Diamond awards. At the highest levels, competition is tight, and you need good workers and resources to get ahead.

However, there's been a setback. You've just been notified by OSHA (Occupational Safety and Health Administration) that one of the lab members you supervise has violated OSHA protocol. That means this week, we'll have to forgo our plans of eagerly consuming the newest publications and reports on Innistrad: Crimson Vow spoilers, and instead spend our time taking a closer look at the maniac's laboratory conduct.

You knew exactly who it was when OSHA filed the complaint: the one who doesn't follow proper Environmental Health & Saftey (EH&S) protocols, nor E(D)H&S protocol:

They're the one who seems to throw all caution to the wind (see: exiling library) but somehow always gets rewarded for it (win the game). For a long time, they were the best at what your lab specializes in, which is why you've kept them around so long, albeit begrudgingly.

However, with OSHA's investigation underway, it raises the question: are there better candidates out there nowadays? Sure, they've always done good work, but are there others who can accomplish similar goals without the risk? Or perhaps accomplish it more efficiently? Let's take a close look and find out exactly what Laboratory Maniac has been up to, and eye other potential candidates.

As is tradition, we’re focusing on rank rather than the number of decks (i.e., decklists), as this helps account for fluctuations in decklists scraped in any given timeframe, which helps us compare the results to other cards. Remember that the lower the rank (closer to 1), the more popular a card is!

This leaves us with three main cards: 1) Laboratory Maniac, 2) Jace, Wielder of Mysteries, and 3) Thassa's Oracle.

There's a new kid on the block in the form of Triskaidekaphile, who was just printed in Innistrad: Midnight Hunt (September 10, 2021). However, it's so new that we just don't have the data to see where it falls yet. I'll try and follow up on our hand-wielding maniac who insists 10+3 is a party in a year or so to see where they fall.

The plots for Laboratory Maniac, Jace, Wielder of Mysteries, and Thassa's Oracle can be seen below. I've started with a superimposed plot so you can compare between the three more easily, but feel free to scroll through the carousel if you want to see individual plots.

As a quick note, I had to modify the Y axis slightly for each of the individual plots to get the best possible visualization without too much empty space. They only differ by about 30 rank (65 for Laboratory Maniac, 35 for Thassa's Oracle), but just be sure to keep an eye out for it.

Wow, that's pretty stellar. All three are ranked above 70, and at one point or another, each of them has occupied a top 25 slot for months on end.

While it looks like all three are trending slightly downwards as of Summer 2021, Laboratory Maniac has the most severe decline, followed by Jace, Wielder of Mysteries. Notably, Laboratory Maniac edged out Jace, Wielder of Mysteries for a while, but in the winter of 2020, Jace surpassed Lab Man and has maintained an average of ~10 rank above ever since. Really, it's no wonder: being a Planeswalker does make it a bit 'safer' from targeted removal when compared to a creature like Laboratory Maniac, a play pattern that matters a lot, since you likely don't want to cast these cards until the turn you intend to draw out and win the game. On top of that, Jace is able to dig three full cards with its +1 ability by milling two cards and then drawing that last (non-existent) card, providing win con and enabler all on its own.

However, let's now look at Thassa's Oracle. Talk about an all-star candidate, ascending to the top 25 blue cards of all time within a month of its release! Not surprising that a sea-dweller would make such a splash.

What makes it so much more enticing than either Laboratory Maniac or Jace, Wielder of Mysteries is that it doesn't even need to draw a card — it simply needs to enter the battlefield to put its trigger on the stack, and as long as you don't have a library (or even less than 2 cards if you have no other devotion), you simply win right then and there, barring a Stifle-like effect. In essence, it's Laboratory Maniac, who costs less to cast (less hazard pay), has a more difficult to interact with condition (follows safety protocols), and can actually dig you for the win rather than passively sit there and wait for something else to draw you a card (i.e., is self-motivated, doesn't need to be constantly micromanaged). Now that's someone who follows PPE and OSHA protocol!

We've seen the potential list of candidates, now it's time to reflect.

If we want to hire Jace, Wielder of Mysteries or Thassa's Oracle, we're going to have to pay them more than Lab Man. For instance, Jace, despite overvaluing his qualifications during 'pre-order' season, has since settled around ~$6 USD. Thassa's Oracle, however, has shown the opposite trend, possibly under-developing their CV and salary negotiations early on, but really began to value their potential around April 2021, and today sits comfortably now around ~$8 USD.

Our resident Laboratory Maniac used to be the only one out there with a skillset that rewarded us for diminishing libraries in such fashion. As such, he came with a high price (~$8 USD), at least until April 2018 when more graduated into the workforce with such skill (reprinted), and shifted down from a Bachelor of Arts/B.A. degree to an Associates/A.A. degree (shifted from rare to uncommon).

Nevertheless, it's worth noting that prices correspond fairly closely to the plots seen above, such that I don't think price is driving any card down in popularity (unlike, say, Insurrection, which has trended down while price has remained fairly high). If anything, people are willing to pay a bit more if it means they get Jace, Wielder of Mysteries or Thassa's Oracle over Laboratory Maniac.

Laboratory Skills and the Demonic-Pact Paradigm

Let's not forget the importance of archivists, diligently digging through old forgotten cards of yesteryear and helping lead to the 're'-discovery of the Demonic-Pact paradigm: 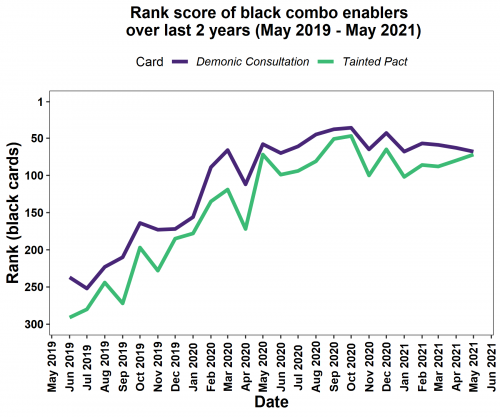 Ever since, and in the last two years in particular, Laboratory Maniac's skills shave been in ever more demand. For the competitively minded, these black combo-enablers and blue combo-finishers go together like Adenine and Thymine. Frankly, for redundancy's sake, you're probably going to run all three in a combo-minded blue deck, and if you have black and are playing competitively, you may well run both Tainted Pact and Demonic Consultation for added redundancy.

With all that said and done, it's most likely that if you want to play at a competitive level, or are someone who has a fun draw-heavy deck in need of a win condition, you might be better off not firing Laboratory Maniac and just hiring the additional candidates of Jace, Wielder of Mysteries and Thassa's Oracle for even more heavy lifting. Even Wizard tribal decks, run by the likes of Azami, Lady of Scrolls or Naban, Dean of Iteration, won't mind the redundancy of Thassa's Oracle on top of Laboratory Maniac, who also happens to be a Wizard.

Plus, let's face it, it's only a matter of time until that Lab man will get into trouble at some point after a Tragic Slip, or dip his hands into a Stream of Acid after forgetting to properly label chemicals, or choke on Fatal Fumes for not taking his experiments into the fume hood like he's supposed to. As such, it might be best to keep all three around in case.

Personally, I've been eyeing that Ormos, Archive Keeper over these three, but I suppose that's a very different kind of game and payoff.

What do you think? Do you prefer running all of them for redundancy, or do you only run a subset of them? Which ones?

Alternatively, is this not at all your style? Are you surprised with how popular the three have become?

Sound off in the comments below, and remember, don't be like Laboratory Maniac: always follow PPE protocol and safety measures!