Oblivion is Just a Stone's Throw Away

Welcome, welcome to the MMXI Board Wipe Olympics — that special gathering where all manner of competitors gather to showcase their prowess in removing the board en masse. 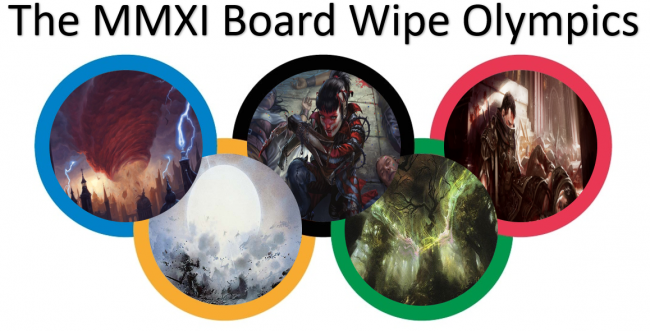 We've got your Sorcery category in a few days, and Blasphemous Act seems to be heavily favored (100,030 decks), though there are some who still think Toxic Deluge (61,738 decks) is a better competitor, even if it didn't win gold last year. The Instants competition just wrapped up, and seven-year gold medalist Cyclonic Rift still reigns champion (150,281 decks), earning another gold medal, even though many are starting to get a bit tired of it (Salt Score = 2.45). True to her name, the young Massacre Girl has been making a massacre of the Creature competition, and shows real promise (10,690 decks) for gold!

But the focus of today's competition is on the Artifacts, and we're looking at two veteran rivals: the Shot Put thrower, Oblivion Stone, and the Discus thrower, Nevinyrral's Disk.

These two are legendary in their history of EDH board wiping, but their veteran status raises the question: have they 'aged out'? Are they finally past their prime, no longer able to keep up with today's younger competitors? How have they looked in the last few years during training? Let's take a look and find out on another installment of Reconstruct History, where we look at popularity of cards and archetypes over time.

As is tradition, we’ll be focusing on rank rather than the number of decks (i.e., decklists), as it helps account for fluctuations in decklists scraped in any given timeframe, and helps us compare it to other colorless cards. Remember that the lower the rank (closer to 1), the more popular a card is!

Additionally, colorless cards are a bit wonky to scrape, as nonbasic lands are often included in the rank of all colorless cards. If you head on over to Top 100 Colorless Cards, you’ll notice they are categorized by top cards, creatures, artifacts, lands, etc., but for ranking purposes of all colorless cards, lands get thrown into the mix, including color-fixing lands (e.g., Command Tower). Since that’s the case, I’ll present the data here both including ("Rank") and excluding nonland cards ("Adjusted Rank"), side-by-side. That way, we can see where Oblivion Stone and Nevinyrral's Disk shape up next to all colorless cards, and nonland colorless cards that could be splashed into any deck.

In essence, we want to see which other colorless nonland cards are competing with the Shot Put and the Discus in popularity. All Is Dust is certainly a colorless board wipe option, but considering it nukes all colored permanents, I didn't want to include it here as I'm not fully convinced someone would swap their Oblivion Stone for an All Is Dust in any colored deck. Scourglass is another neat option, but in this case it can't be slotted into any deck since its color identity contains white.

The results are in, and the duel between the Shot Put and the Discus can be seen below! Feel free to scroll between graphs to see the raw and adjusted rank scorings. Just be sure to keep a keen eye on any scale changes on the y axis! Typically it’s bad form to change scales, but I also don’t want to ‘flatten’ meaningful variations in the data because we are removing nonland cards (i.e., ‘fluff’).

Well, well, it seems both Nevinyrral's Disk and Oblivion Stone have been trending downwards of late. Let's see how they shape up against one another: 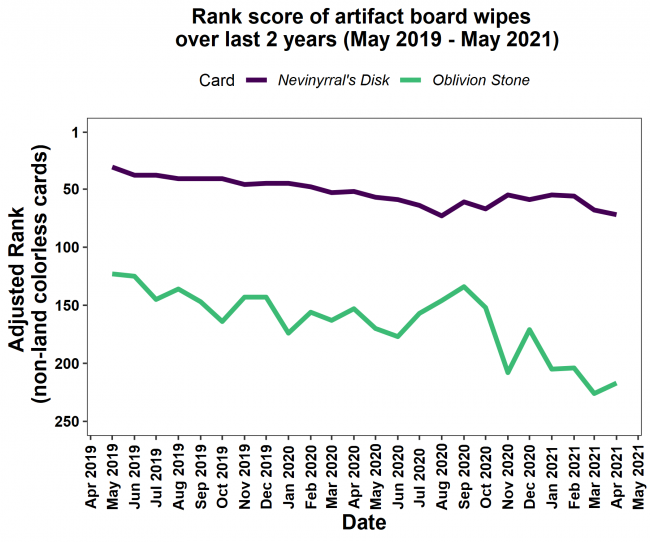 While Nevinyrral's Disk is trending downwards, it's not nearly at the severity of Oblivion Stone. O-Stone may still be in the top 250, but its downward trend may well suggest that, in a year or two's time, it won't even be in the top 400. Just look over at the Top Colorless cards and you'll discover that O-Stone is nowhere to be found.

With the results in, it's Time to Reflect!

Oblivion Stone has a pretty storied financial past. Check out how it was above $10 for almost five years, spiking north of $30 at one point in 2015-2016! Starting around 2018, we see a major decline, and its printing in Double Masters has rendered it in the "< $5" box/binder at your local gaming store. While Oblivion Stone did (does?) see some fringe play in Modern mono-green 'Tron' lists, its only printing outside of masters sets were Commander products, pretty much telling us Wizards of the Coast envisions it as a Commander card.

Nevinyrral's Disk on the other hand hasn't trended above even $6 since 2013. It's sat pretty squarely in the $2-4 range, nestled next to Oblivion Stone in that sub-$5 box.

All this goes to say: the decline in popularity of both Nev's Disk and O-Stone is likely not the product of price, as they've become more affordable over time.

While Oblivion Stone's bottleneck is the mana required to activate it, Nevinyrral's Disk's is coming in to play tapped. Despite their differences, both suffer in being a permanent-based board wipe, therefore telegraphing the player's intentions very visibly. By contrast, most (but not all) other board wipes are spells — typically instants or sorceries — that you can wait until the opportune moment to deploy. They don't elicit much, if any, telegraphing. Heck, even just bluffing that you have one (like repeatedly leaving up seven mana in a blue deck) can occasionally achieve the desired effect as people are too scared to deploy things into a potential board wipe.

It may be that people aren't valuing these two artifacts as board wipes when nearly every color has slowly gotten more removal options. This paired with the advantages of having access to multiple colors in your command zone means even if one of the color lacks in board wipes (say, green), chances are, the other color(s) will have options (say, white or black... or both). As such, what a lot of board wipes seem to come down to nowadays is their mana value. When we looked at white board wipes a few months back, we saw higher mana value options (mana value 6 or more) really taper off in terms of popularity compared to leaner options like Settle the Wreckage, Slaughter the Strong, or at least ones that had added flexibility like Austere Command.

I quoted Command Zone's Josh Lee Kwai there as I think his perspective had a good pulse of the format generally, stating that people seem to value leaner board wipe options because...

“The margins are much slimmer than they used to be….the format has evolved, it’s sped up.”

The fact that Oblivion Stone costs eight mana to effectively wipe the board without some sort of cost reduction (hi, Zirda, the Dawnwaker!) is a steep ask for some when they'd rather just slot something cheaper and less telegraphed. Nevinyrral's Disk costs a total of five mana in most cases, but requires an untap or a go around the table before you get to use it, making it susceptible to removal before you ever get to even benefit from its intended use.

Both Oblivion Stone and Nevinyrral's Disk cast a wider net in terms of what they destroy compared to most board wipes, but their mana and timing may drag down their evaluation nowadays with other options.

Okay, we spent a sufficient time 'spiking' the O-Stone like a volleyball, but despite its perceived drawbacks, there's some great potential for the ruthless rock. Unlike most board wipes which are spells, and typically a 'one-and done' deal outside of the occasional Archaeomancer, Oblivion Stone's mana value doesn't look so bad if you can recur it out of the graveyard, and especially 'cheat' its casting cost in the process. At that rate, you get to wipe the board for five mana instead of eight, and that's a much better deal.

Oblivion Stone sitting at three mana means it can be recurred with Sun Titan, Goblin Engineer, Teshar, Ancestor's Apostle, Sevinne's Reclamation, etc. You can really sow oblivion when you give a fate counter to one of these guys, as now you can repeatedly bring back Oblivion Stone and not worry about it destroying the very recursion piece that keeps bringing it back. We saw a great set-up in Game Knights Episode #16 when Kenji Egashira was able to cast Sun Titan recurring Oblivion Stone and the table immediately realized they had to do something quick before Kenji was able to put a fate counter on Sun Titan and begin an endless (albeit, mana-intensive) loop of destruction.

Nevinyrral's Disk being at four mana means it can't be recurred by some of the above effects, but it still has potential with cards like Goblin Welder, Sharuum the Hegemon, etc. Coming in tapped means it can often bait out removal before it ever even gets activated, which, sometimes, is actually just fine. Removal bait is often underrated, and if it removes a card from an opponent and makes you more likely to deploy something later, you're not in a bad place. Where I see it doing well is in decks that can untap it with things like Kiora's Follower, Aphetto Alchemist, or Fatestitcher.

In fact, both Nevinyrral's Disk and Oblivion Stone can make fine work in an artifacts-themed deck, or an untap deck that uses Unwinding Clock or Seedborn Muse effects. Being able to put fate counters on different permanents (including the stone itself!) around the table means more of your board gets to be saved when you inevitably press the button. Having the threat of Nevinyrral's Disk activation on each opponent's turn also puts you in the maniacal driver's seat — just be careful you don't get hated out of the game as a result!

Finally, the fact that Oblivion Stone works with Triad of Fates is a fantastic little coincidence, and I'm happy that all you Triad players out there have a special interaction like this.

While both Oblivion Stone and Nevinyrral's Disk may not look to be as generic as they once were, I don't think that's a bad thing. They've become more niche as more cards have flooded the game and format, and I think that's fine, as they're poised to take advantage of particular decks that can make use of them repeatedly.

What's y'all's opinion? Sound off in the comments below!

As always, thanks to Nate Burgess (@MisterPlorg) here for helping with the data!