A happy late new year to you all! Welcome back to another installment of Reconstruct History, where we examine popularity of certain cards or archetypes over time, as measured by EDHREC data.

It's a new year, and that means we have some new data! We have updated our scrape to now reflect January 2020 - January 2022. I know some (many? all?) have asked about the possibility of extending back further. It's possible to go prior to 2019, but our scraping metrics, parameters, and even which sites we scrape(d) from have all changed since then. This makes some of the data really wonky in a temporal scale as a result of massive peaks and drop-offs. As such, I'm going to be sticking to a two-year window for now to get a sense of the format as it's changing and evolving. If there are particular cards we may be able to isolate and track back far enough without too many caveats, I'll try and do so.

This week however, we're focusing on feels like a classic staple of the mono-red Commander arsenal: Outpost Siege.

Occasionally called the "mono-red Phyrexian Arena (that costs one more mana, doesn't draw, doesn't lose you life, has added modality, and doesn't guarantee you a card)", Outpost Siege was, for a long time, one of the few options for mono-red and other red-centric decks to gain an incremental way to maneuver through their libraries.

Obviously, there's a caveat here that Outpost Siege may well be played for its Vela the Night-Clad effect rather than strictly for its 'impulse draw' effect, but if anything, I think that just speaks to the card's modality!

First off, I highly suggest you check out fellow author Doug's Too-Specific Top 10 article on the Top 10 Impulse Draw Effects where he traces some of their history and shows some of Outpost Siege's competitors as of March 2021. I'll actually be following much of Doug's eloquently stated criteria here, as I think it helps get at exactly the cards we're interested in.

As is tradition, we’ll be focusing on rank rather than the number of decks (i.e., decklists), as it helps account for fluctuations in decklists scraped in any given timeframe and helps us compare it to other colorless cards. Remember that the lower the rank (closer to 1), the more popular a card is!

Although we're focusing on Outpost Siege here, it's best to analyze it in relation to similar cards. In essence, we want to see which other cards someone might run in addition to Outpost Siege, assuming they could only choose red cards. Alternatively, what would someone perhaps swap Outpost Siege out for?

This leaves us with a few cards that I'll separate into enchantments and 'Chandras', since there are a few that actually do similar things:

Undoubtedly, these are not the only options for red card advantage. Wheel effects (e.g., Wheel of Fortune, Wheel of Misfortune), one-off impulse or rummaging spells (e.g., Light Up the Stage, Tormenting Voice, Faithless Looting), creatures (e.g., Etali, Primal Storm, Syr Carah, the Bold, Laelia, the Blade Reforged), artifacts (e.g., The Immortal Sun, Staff of Nin), and even lands (e.g., Bonders' Enclave, War Room) all probably factor in as possible considerations. There're some neat new options as well (like Geistflame Reservoir), but we just haven't gotten enough data to really look at where they fall yet.

In this article, I just want to focus on permanent-based impulse card advantage and, more specifically, enchantments and 'Chandras'. While we can (and will) debate whether these cards always stick around long enough to actually net you sustained advantage, we'll be looking at their inclusion for their 'ceiling' — that is, their potential to stick around for numerous turns and generate sustained card 'advantage.'

So without further ado, let's look at the data!

Let's start with the individual graphs. Feel free to scroll through the carousel to see each of the cards (organized alphabetically). As a quick note: keep an eye on the Y-axis. They change in each graph in order to show the complete range. I'll make sure to co-plot them down below so you can better see how they compare to one another.

Here are the plots of some of the cards side by side, followed by plots of the top 300 ranked and top 100 ranked cards to give some more granularity:

Well, well, well! It looks like Outpost Siege has remained fairly steady after all! In fact, it's in the running for top dog, next to Valakut Exploration and Chandra, Torch of Defiance, all consistently ranking within the top 100 red cards in the last two years. Sunbird's Invocation has also sat in the top 100, but it seems to be trending downwards.

Stolen Strategy seems to have experienced a bit of wobbling but has remained fairly steady around ~250. The others, Furious Rise and Vance's Blasting Cannons, seem to be quite low in rank and are trending downwards.

One thing I like to do is look at the cumulative change in rank by card. This gives a very approximate look at a card's volatility (how much it shifts up and down) within this two-year time-frame.

We can see Outpost Siege and Chandra, Torch of Defiance have remained fairly constant, shifting up and down slightly compared to the medium shifts in Stolen Strategy and Valakut Exploration. Obviously, Valakut Exploration's change is going to be a bit inflated as of now, since the card skyrocketed in popularity since its initial printing in Zendikar Rising (Sep 2020). I think that number will go down quite a bit within a few years time as it stabilizes. Finally, Chandra, Fire Artisan, Chandra, Pyromaster, Furious Rise, and Vance's Blasting Cannons see much more volatility, experiencing over 1,000+ rank changes in the last two years.

Without further ado, it's Time to Reflect!

Outpost Siege and Valakut Exploration both sit as the most popular of these effects, and both are under $1. Heck, Outpost Siege is practically a gumball card ($0.25)!

The rest of the cards are pretty much bulk as well, all coming in around $1 or less, outside of Chandra, Torch of Defiance and Stolen Strategy, the latter of which went from a $5 card to a $20 card in July 2021, and was the weekly winner of the July spike. It was mentioned on the Command Zone as a great upgrade for the Planar Portal preconstructed deck (July 2021) so it's no wonder this card saw a spike in both price and rank shortly after.

Altogether, we don't see price being too much of a major factor here. I think the changes in rank we see here are more an effect of their playability and niche, rather than price.

I'll level with you: a big inspiration for this article was seeing how any of these cards might have been affected by the printing of Prosper, Tome-Bound.

Helming the Planar Portal preconstructed deck (printed July 2021), Prosper went from what felt like a cult to a full-on religion in a matter of just a few months. He's currently the top Rakdos commander, edging out Anje Falkenrath and the guild's namesake himself. Even more impressively, he was printed less than eight months ago, and he already helms nearly 4,000 decks, sitting among the Top 25 most popular commanders in the last two years. Well done, nerdy Hellboy! 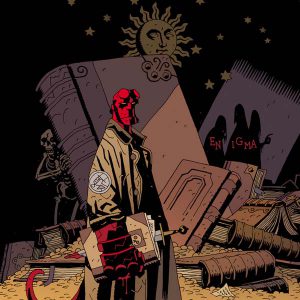 Somewhat surprisingly, none of the cards analyzed here were present in the original printing of the Planar Portal precon, meaning any spikes in the data we see are likely the result of people actually swapping out cards from the precon and adding these in.

Sure enough, if we take an even closer look at the data, nearly all of these cards spike right after Prosper, Tome-Bound is spoiled (July 2, 2021) and the Planar Portal precon is released (July 23, 2021): 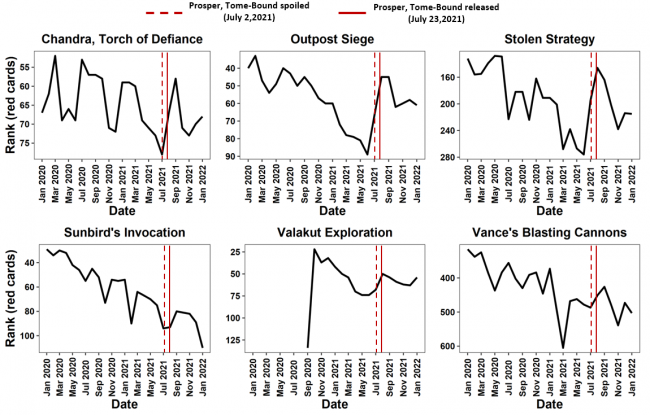 For some of these cards, we can see just how much their rank increased from June 2021 to August 2021, after the printing of Prosper:

Overall, this appears to be one of those neat instances where the printing of one card can have waves of impact on the popularity of others.

Options like Furious Rise and Vance's Blasting Cannons have fallen off tremendously, but they still have their homes! Furious Rise can still pull its weight in the right shell, especially in mono-red, Gruul, or Boros decks that emphasize big creatures.

Vance's Blasting Cannons was a card I ran for a while in my mono-red decks, but, admittedly, I've since cut it. Personally, I found the need to play the card by end of turn, paired with being unable to play lands (since the card is worded 'you may cast that card until end of turn') was just too much of a drawback. There were just too many instances of me needing the top card to be a land, and Vance's Blasting Cannons would rip it off the top into the abyss, while I draw into another non-land.

It can still pull its weight in Bell Borca, Spectral Sergeant, Laelia, the Blade Reforged (holy heck, is she great!), and even Prosper, Tome-Bound since you can potentially get a mana to offset the nonland stipulation. Most of all, though, I am so happy to see it seeing play in 47.44% of Captain Ripley Vance decks. Kudos to all of you keeping the flavor of EDH alive.

I'll be honest, I'm kind of surprised many of these cards are doing as well as they are. So much of Commander feels sped up, to the point where I've definitely heard chatter of a few of these cards being labeled as "do nothing" enchantments that don't immediately reap a benefit upon casting. I understand the sentiment completely, but I guess a kernel of my EDH heart is happy to see these experiencing as much play as they do. I think it goes to show that for many of us out there, a card doesn't have to do something the turn its deployed to be considered 'good enough.'

How about you? Do you still run Outpost Siege or some of these other options? How have you been enjoying recent options like Reckless Impulse or Geistflame Reservoir? Sound off in the comments below!