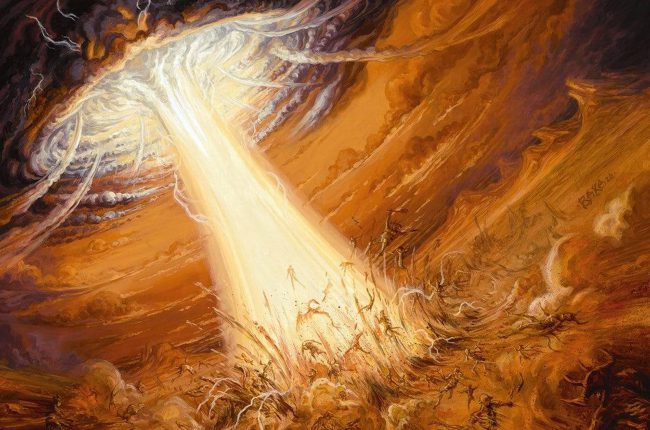 While going through potential options of cards to look at for this article, I realized I had made a glaring omission in this series: to date, I've not yet covered any white cards! Maybe doing all the set reviews in other colors has tainted me, and I can no longer see the light. Or, more likely, I was just lazy. In any event, I'm here to do some catch-up work focusing on one of the things white (purportedly) does best: invoking the Wrath of God.

Board wipes, or 'wrath' effects, colloquially named after the iconic Wrath of God, are spells or abilities that destroy more than one permanent simultaneously. They are canonically treated as part of white's wheelhouse, evidenced by old-school icons like Wrath of God, Winds of Rath, or even Retribution of the Meek, often speaking to white's ability to punish opponents from over-extending with their resources.

Just where do they stand nowadays? How have white's board wipes fared amidst all the discussion of white color philosophy? How might this factor into what white does (and doesn't) do best in a format that sees a lot of chatter about the importance of mana-efficient, instant-speed, targeted removal? Let's take a look!

Let’s start by outlining exactly what we’re looking at:

Yes, this means I'll be excluding cards like Nevinyrral's Disk, since they can technically slot in anywhere. That leaves us with the following list, organized alphabetically:

Unfortunately, since we're only scraping the top 400 white cards, this means some neat, hipster options aren't going to be presented here:

That said, these all have some unique potential in the right builds, so don't discount them when you're in need of options for board wipes!

I’ll start by putting an image carousel here to all the individual plots organized alphabetically for each of the cards listed above. If you want to see a particular card’s popularity trend over the last two years, just click/scroll right or left to find the card you’re curious about (or up/down, if you prefer viewing in the imgur page). As a friendly reminder, remember that the lower the rank number (closer to one, higher on the Y-axis), the more popular it is!

As a final note: keep an eye on the Y-axis! While it’s usually a bad idea to have different scaled axes for the same metric across different graphs, if I left it at the maximum of 400, much of the subtleties and shapes in the trends get lost. As such, for these individual plots, I’ve scaled their axes according to maximizing their visual depictions. We’ll take a look at each card with a fixed axis in the next section.

While it's great to see each card on its own, it's often more informative to see it directly plotted against others. Let's organize each of the board wipes by mana value, and end with a master plot of every board wipe analyzed here.

With all those graphs, let's try and synthesize some of the major findings.

While none of the cards analyzed have a complete flatline (like when we looked at Cultivate), there are some white board wipes that are clearly here to stick around a bit longer, whether for efficacy or iconicity. Wrath of God, the original wrath, is still top dog, and only Austere Command comes close, likely for its modality. Cleansing Nova also seems pretty prevalent, but I'll share my thoughts on that below.

Numerous cards covered above appear to be trending downwards. In fact, most do.

Fell the Mighty is a neat card, but requires a particular build-around to take full effect, and its price doesn't help it either. Others, like Mass Calcify, Fumigate, and Phyrexian Rebirth, likely require particular strategies and also seem to be trending down.

End Hostilities has completely fallen off the chart, and Sublime Exhalation has been out since Commander 2016 but barely shows up at all before falling off again. Perhaps people don't think the ceiling of this card (where, assuming a four-player pod, it will cost four mana) is enough to not just run a Day of Judgment or Wrath of God instead. If you're playing Planechase or some crazy five- or six-player Kingdom game, I can see it, but I think a lot of people have just moved to other options.

Well, to be perfectly honest, there aren't really any cards examined above that are consistently trending upwards over the last two years. Some, like Rout, Tragic Arrogance, and Cleansing Nova, do appear to be experiencing upticks around April 2021, but we will need to catch up on some scraping for this series before we know if that trend continues.

More likely, these three in particular are the result of the 'precon effect', where a preconstructed Commander deck includes a given card, and that card sees inflation on EDHREC as a result of people logging their slightly-altered preconstructed decks online, sometimes even before the decks themselves are actually available for purchase. All three of these cards were reprinted in the Commander 2021 preconstructed deck (April 23, 2021), and both Cleansing Nova and Hour of Reckoning just saw another reprint in the Coven Counters precon.

Doomskar does show some promise, but it's likely a bit too early to tell. I'm hopeful to revisit this one as we get more data, as the five-mana cost can actually be semi-circumvented by paying a down payment of two mana on an earlier turn.

Generally speaking, though, the trend for most board wipes, at least those strictly in white, seems to be heading down.

Board Wipe, or Wipe Out?

Which raises the question: are board wipes themselves not as popular?

Without a doubt, there's some serious debate on where white stands in terms of removal. The Professor put out a video almost a year ago (Jan 2021) showing how other colors have gotten fantastic removal options, to the extent that white no longer is the de facto removal color. Others, such as the EDH Deckbuilding channel, have sought to refute this, maintaining the idea that while other colors have obtained both spot removal and sweepers, white still has the deepest pool and often most effective means of wiping the board.

Regardless of wherever you or I come down on all of this, I think there's a bigger discussion at hand: are board wipes less necessary than they were a few years ago?

The Command Zone podcast put out a video in March 2021 specifically covering board wipes. In their coverage, they also note how the number of board wipes they advocate for including has gone down slightly, from 5-6 in years prior to 3-4 in recent years. As Josh Lee Kwai states:

"The margins are much slimmer than they used to be....the format has evolved, it's sped up."

Part of the evaluation centers around problematic permanents that demand to be dealt with immediately, before they warp the game around themselves. Think Nyxbloom Ancient, Tergrid, God of Fright, or The Great Henge. An opponent resolving any one of these may slingshot them so far ahead that you need an answer now, and often on a slim mana margin, since you likely spent most of your turn spending mana to develop your own gameplan.

This is why targeted removal has entered discussions recently of (possibly) being valued a bit higher than board wipes. Some may feel pressured to include effects like Pongify, Infernal Grasp, or Assassin's Trophy more than they would Wrath of God or Rout since they are slimmer on mana, and they afford you the potential to develop your plan and simultaneously be more likely to handle an opposing threat.

Mana-intensive board wipes can also be seen as 'sluggish' in a format that's experiencing a general slimming of mana curves. The calculus often goes thusly: if you spent your entire turn six to spend six mana casting Terminus, and then passed, you may have set some people back for sure, but they now have the opportunity to rebuild before you. You may have solved a problem, but you also might have given them, or someone else, an opening to rebuild.

Even worse is casting a board wipe into effects like Heroic Intervention or Teferi's Protection, which essentially means they get to piggyback off of you spending your mana to set everyone else back, while they dodge the destruction and are ready to wreak havoc when it gets back to their turn. In those cases, why run board wipes when you can let someone else do it and save your own board in the process, for less mana?

Obviously you won't always be in the lead, nor have access to protection in the event someone tries to set your board back, but I think that's why low-cost board wipes are such a premium nowadays. Think of Toxic Deluge, Blasphemous Act, or even Last One Standing, where you're able to press the reset button without spending your entire turn doing so. I'll try to get to these specific cards in a future installment for comparative purposes, and I'm sure the new Vanquish the Horde will be a very interesting development alongside them.

I can't speak for others, but I will disclose that I've certainly noticed that I tend to run fewer board wipes than I used to. This change feels as though it's spurred by a need for more spot removal, but also by a general sentiment of being generally okay if board states get out of hand and the game progresses - or even ends - as a result. With limited time to play, I've been enjoying shorter game times (so that we play more games) and seeing peoples' board states get out of whack. Personally, I'd rather cut board wipes and lose, than have an abundance of them and slow things down, especially if it means we'll get more games in during the limited time we have to play.

But hey, that's just me. What about you? Do you find yourself running fewer board wipes nowadays? If so, which ones do you prefer? If your board wipe numbers haven't declined, what do you think is the reason?

And as always, thanks to Nate Burgess (@MisterPlorg) here for all the help!