Welcome back to another installment of Reconstruct History, where we look at popularity in cards and archetypes here at EDHREC over time.

I know, I know, last time we concluded with Treasures, Pt. 1 and I promised I would look at Treasures, Pt. 2 at the Treasure 'hoser' cards. Fear not! I am in the process of writing that article, but I wanted to wait to get some more data to trickle in on Treasure hosers now that Streets of New Capenna is out, and see where the data settles.

In the meantime, I wanted to take a look at a particular suite of sweet cards: the modal double-faced cards from Zendikar Rising, but since that's a complete mouthful, from here on out we'll be referring to them as MDFCs for short.

These aren't the only MDFCs mind you: the 'pathway' lands, like Clearwater Pathway, are technically modal double-faced (land) cards, but I wanted to focus specifically on the modal cards that are a land on one side and a nonland on the other.

Modal double-faced cards, specifically the nonland ones introduced in Zendikar Rising, generated quite a lot of discussion, which I'll cover in detail below, when they were previewed and released back in September 2020.

Heck, my own playgroup hosts some sessions for discussion instead of playing the game. We call it "Wine and Whine", where we pour some fermented grape juice and air grievances about playgroup troubles. It's a great way to vent and decompress about certain decks, archetypes, or 'boogeymen' in our group while also coming together to chat about all the things around the game. I guess you could say it's like a an extended Rule 0 conversation.

Anyways, one particular Wine and Whine, after the full set of Zendikar Rising had been released, we got in a pretty heated debate about what the Zendikar MDFCs would do to the format. Most in our playgroup were of the opinion that they were interesting, but the juice wasn't worth the squeeze, citing the tempo loss, life loss on the land sides, and over-costed, niche effects on the spell sides. Conversely, my brother and I trended towards thinking they could fundamentally alter the game itself, and that we would try to experiment with as many as possible to see how they fare.

Now that we've had a bit of time for some of the data to settle (16 months), I thought it would be a good time to check in on our modal cards and see exactly how they've fared since their introduction to the format.

In other words, let's see how wrong I was!

For those who are unfamiliar, I'm using 'rank' here rather than number of decklists as rank can help account for the popularity of that card given other options within that same color.

That leaves us with a specific list of six mono-colored cards per color, totaling 30 cards:

Let's start with a carousel of individual cards. I've organized it alphabetically, but the color identity of that card corresponds with its color in the chart. Feel free to scroll through and see the variation observed in popularity over time since their initial debut into the format.

Of note: keep an eye on the changing Y-axis in these individual plots. Normally it's frowned upon to change axes so much when you're trying to compare cards to one another, but I did it so you could better see some of the shape and variation of these particular cards over time. We'll co-plot all these cards next to each other below with a fixed Y-axis.

Alright, now let's see these cards side-by-side to better compare. I'll put all 30 MDFCs here side-by-side, followed by a plot that only looks at the most popular options, those that consistently break the top 100 cards in their color.

It's interesting to see the variation here. While all of the cards show some degree of uptick from September 2020 to August and November of 2020, a lot of that can be explained by initial adoption and when people started to incorporate MDFCs into their decks after the set released. What's more interesting to see is the trends on where cards settle.

Finally, since it's been a few months since January 2022, let's take a look at how popular Zendikar MDFCs are today (3/16/2022 at time of writing). While we could look at rank and/or number of decks, some colors are just more popular than others in this format. Since each of them are mono-colored, we can look at the percentage of eligible decks to see where they fall. This closely approximates rank and number of decks any given card is included in, but it also helps account for the disparities in colors a bit better. To avoid overlapping the labels too much, I have a few with a call out (see Zof Consumption, Blackbloom Rogue, etc.). 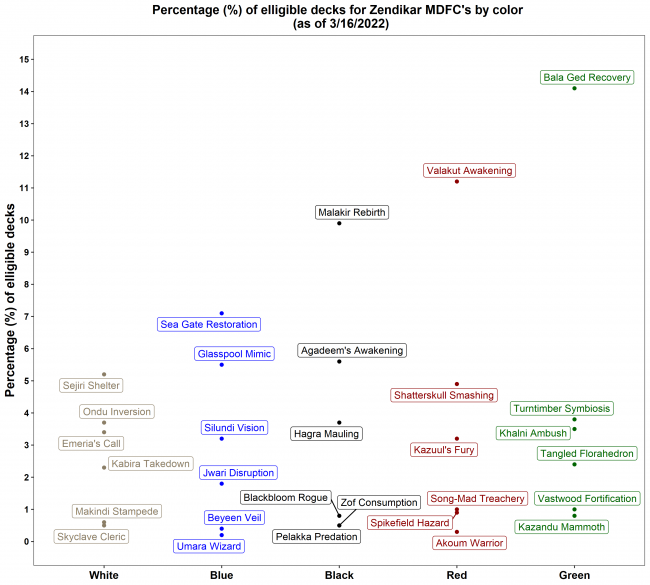 That's also pretty informative: the fact that nearly 14% of all green decks run Bala Ged Recovery is pretty astounding. Valakut Awakening, Malakir Rebirth, and Sea Gate Restoration all see quite a bit of play as of today, while the vast majority are more modest in their inclusion rates (23/30, or 76.6%, of these MDFCs included in less than 5% of color-inclusive decks).

Without further ado, it's time to make sense of this data, and reflect!

Let's start off by looking at the price (in USD) of Zenikar Rising MDFCs and see if we see any patterns. I'll use the same graph above with the Y-axis set to Percentage of Eligible Decks, but this time change the X-axis to price: 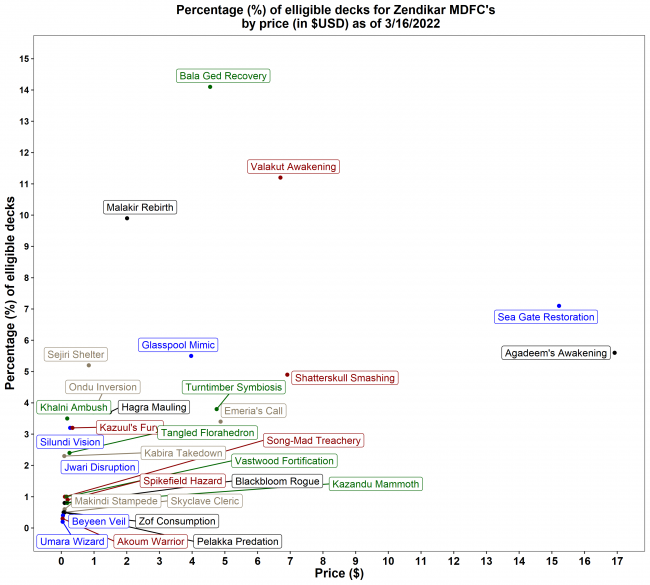 While the vast majority (20 out of 30; 66.7%) of MDFCs cost less than $1, there are a few outliers in Sea Gate Restoration and Agadeem's Awakening, which isn't entirely surprising, considering these two are mythics, and some of the better of the mythics suited for EDH, whereas Shatterskull Smashing, Turntimber Symbiosis, and Emeria's Call all fall a bit lower in both price and popularity.

It's important to keep in mind that all of these cards are still legal in Standard, which could warp some of these prices away from just EDH price demands. That being said, I don't think any of these prices are too far-fetched, and I wouldn't say price inherently explains playability here. Bala Ged Recovery, Valakut Awakening, and Malakir Rebirth are all played at much higher rates than their mythic counterparts, but I think it does tell you just how popular and in-demand cards like these are, as all of them see lots of play and fetch quite the price tags for being rares and uncommons!

The issue, as anyone who has played Commander enough knows, is when you begin hitting lands later in the game when you really want to be transitioning to your late-game haymakers. Alternatively, drawing your big haymakers early when you really want to be hitting land drops or ramping instead has also happened to many of us. It's why card draw is so important to our format: so that we keep seeing more and more of our deck and lessen our chances of just being at the mercy of our top deck.

While not all the discussion out there was centered on EDH, I think it's worth considering a lot of the general discourse about the introduction of MDFCs. So much of Magic: the Gathering's previous 25+-year history was based on the fact that the game revolves around lands and nonlands. The idea that you could have access to both a land and a nonland in the same card would likely blow people's minds from 20 or even 10 years ago.

Let's cast our mind back, to when people were discussing how important having a choice of land or non-land was.

Okay, not that far back. More like September 2020. There are thousands of words and hours dedicated to evaluating MDFCs, so what you see below is by no means exhaustive, but hopefully gets a bit of a pulse on what some content creators were thinking.

Conversely, even though they're probably better in your mono- and two-colored decks (since you don't worry as much about problems of color fixing), they don't synergize with your Extraplanar Lens, Caged Sun, or Gauntlet of Power effects.

As we've all had more time to play and try them out, I think the concern about their 'tempo loss' of coming into play tapped (for the non-mythics at least) is valid. The mythic cycle, at least in my eyes, just isn't that much of a downside, especially since I'm already one to be reckless with my life total. However, too many MDFCs, especially the non-mythic ones, may well help provide flexibility to your land/spell counts, but at the cost of many games being a bit slower than you may like. This can be especially concerning for some playgroups, as the format generally seems to be speeding up.

Much of their efficacy comes down to what your land count, color identity, card draw/velocity, and mana curves are sitting at. A deck with low land count (e.g., 33 lands) removing even more of those lands for MDFCs in hopes to cast the spell side probably won't happen all that much. But running a decent land count (e.g., 37) with some of those being MDFCs, or even keeping the land count high and adding in MDFCs on top of that means you probably will be pleased with casting the spell side more often than not.

Now, whether that spell side is good, or worth it to you, is another question entirely. Almost any deck can find use for a Regrowth, which is why Bala Ged Recovery is just so high, especially in a color that tends to have no problem getting other lands into play. It's a lot harder to justify cutting a basic land for Umara Wizard when your tap-land comes with the upside of... a conditionally-evasive 4/3 for 5 mana.

Even a year later, I still find MDFCs to be almost camp-like, with some being staunch opponents, citing their tempo loss, and others swearing by their flexibility. Opponents cite their corner-case nature, while proponents cite exactly that corner-case potential that makes them worth including. 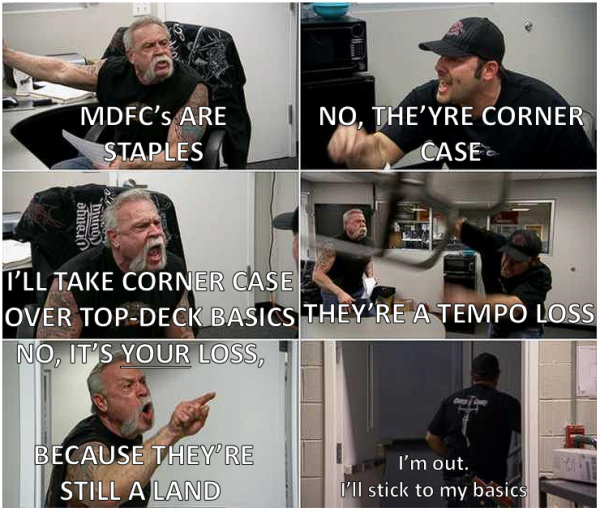 All in all, it's interesting to see where the community falls, at least as evidenced by some of the data here at EDHREC.

So what's your take? How do you evaluate the Zendikar Rising MDFCs now that we've had ample time to play with them? Have you been impressed? Disappointed? Which ones have made the cut? Sound off in the comments below!