Hello, everyone, and welcome to Recross the Paths, a series that helps commanders to be seen in a new light.

Today’s article is about Winota, Joiner of Forces. Our Ikorian native is an extremely powerful commander that takes advantage of combat steps to transform a mediocre-looking board into a true army. Let’s see what twist we can give to such an established commander.

By looking at her EDHREC page, we can easily recognize that Winota is usually paired with two main strategies. The first strictly sticks to our commander’s textbox and revolves around producing many cheap creatures or tokens in order to trigger her many times per combat. The payoff of such a gameplan is, of course, cheating powerful Humans into play. This version of the deck can go many ways - pure Human tribal, Soldier tribal, or token strategies - but the main core of the lists remains the same.

The second potential direction Winota players may go is a Stax strategy. Such builds seek to slow down the board, control it, and set up a comfortable environment for Winota to enter the battlefield and flood the board with free value.

Stage One: The Deck

All in all, the styles mentioned above stem from a common ground: a large number of Human creatures. This is pretty obvious, given how well our commander synergizes with this creature type. Nonetheless, I believe there’s another way of building this deck, which doesn’t play Humans as payoffs but rather as complementary tools to another aggro strategy.

Yeah, you read that right: today I’m going to discuss why Winota is the perfect figure to lead an army of robots.

The main idea here is that Myr are cheap creatures that both trigger Winota and also allow us to reach Metalcraft easily - that is, having three or more artifacts in play - which plenty of Humans from the Mirrodin sets care a lot about. We'll get to the Humans in a minute, but for now, we have some important robots to look over.

Among the Myr are several ramp pieces, such as Palladium Myr, as well as utility creatures, like Shimmer Myr and Myr Enforcer. The Enforcer might look silly, but if you've ever played with or against it, you know perfectly well that it’s basically a 4/4 for free.

Myr Battlesphere, Lodestone Myr, and Myr Galvanizer are definitely the most powerful tools in the Myr arsenal. Battlesphere is basically everything we want from a creature; it has a big body that can both attack and block well, it creates four other Myr as it enters, and it can take advantage of our other creatures to pump itself and also burn our target. Lodestone Myr can easily grow its power and toughness into double figures, and Myr Galvanizer is one of the cornerstones of the deck, serving not just as an anthem but also giving our Myr pseudo-vigilance. Plus, that effect is especially powerful in combination with Lodestone Myr!

Naturally, we need to run a certain number of Humans to actually get some value out of our commander. Since this is a Myr deck, I didn't want to play more Humans than Myr, though straddling that line of two themes at the same time is an important aspect of Winota's strategy.

Importantly, many of the Humans we'll use serve as a sort of small toolbox. For example, Ardent Recruit, Auriok Edgewright, and Auriok Sunchaser are cheap creatures that hit relatively hard, considering their mana cost. By contrast, cards like Bastion Protector, Rebbec, Architect of Ascension, and Fountain Watch protect our army from our opponents’ removal spells in different ways. Bastion Protector is especially crucial to help keep our commander safe and to rebuild even after a board wipe.

There aren’t many cards that actually actively synergize with Myr, but there are still some fun goodies. For instance, Genesis Chamber, Shrine of Loyal Legions, and Master's Call can all grow our army while also pumping our artifact count.

Myr Matrix and Myr Turbine also can produce more Myr, but more importantly, they give us an indestructible anthem or a tutor for whichever Myr we might need, and Myr Reservoir works as a specialized mana rock and as a recursion engine.

None of these cards are groundbreaking on their own, but when combined with all these other little synergies, they put in a lot of work.

Boros colors grant us access to some of the best pieces of interaction in the whole format, and there are two in particular I'd like to highlight for this deck. The first is Dispatch, a fantastic Metalcraft spell. A one-mana hard removal spell for artifact decks never ceases to amaze me. The other is And They Shall Know No Fear, a sweet new card that, in this deck, becomes extra flexible, helping either to protect our Myr or our Humans, depending on our needs.

We’re now on to the last part of this deck tech: the data room. Was this deck idea actually unique? Let's compare the list against both the average Winota deck and the average Myr deck to see what we gained (and lost) in the process.

Step One: The Average Winota Deck

As we know, Winota is pretty popular. She ranks 3rd among Boros commanders, 57th overall, and has 4,289 registered decks according to EDHREC.

We can receive some initial feedback on how much we’re shaking things up by looking at what people usually play in Winota lists.

In this case, the response seems pretty positive: only two of the cards we run see significant play in other decks. In particular, using the advanced filters, we see how Ethersworn Canonist is played in around half of them, while Gold Myr is in 42.5% of them.

However, if we take a closer look at the numbers, the situation becomes more clear. Out of the 20 Myr in our list, only six of them see any kind of play, and among them, just three find room in more than 1% of the Winota decks out there. 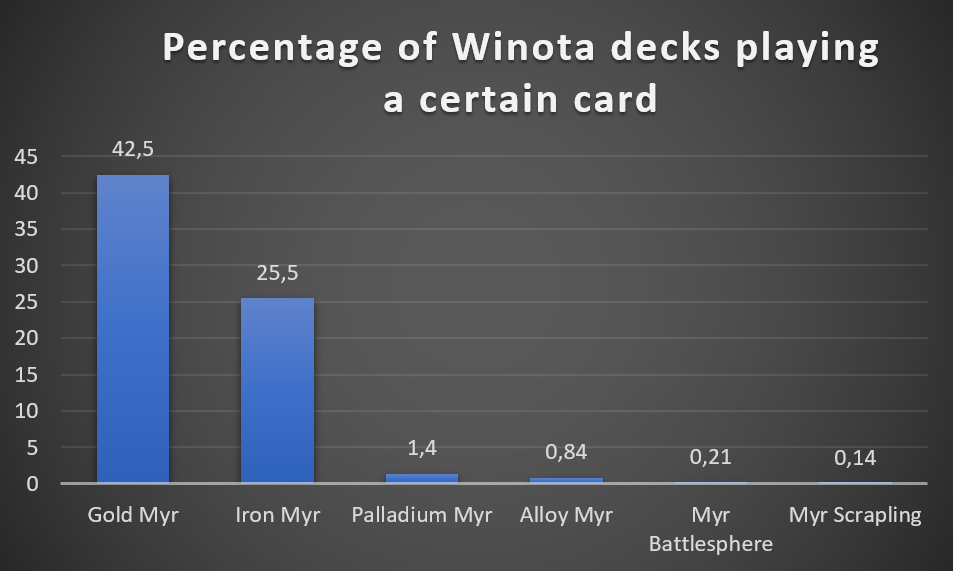 This is a clear signal of how our innovation is only partial. On the one hand, it's true that we're doing something completely new; on the other, perhaps we should question the quality of the cards we included, if basically nobody plays them.

Still, there’s something else to look at: the inclusion rate of the Humans present in the list. In fact, with more than half of them seeing some kind of play, we can start to feel the newness of our work. 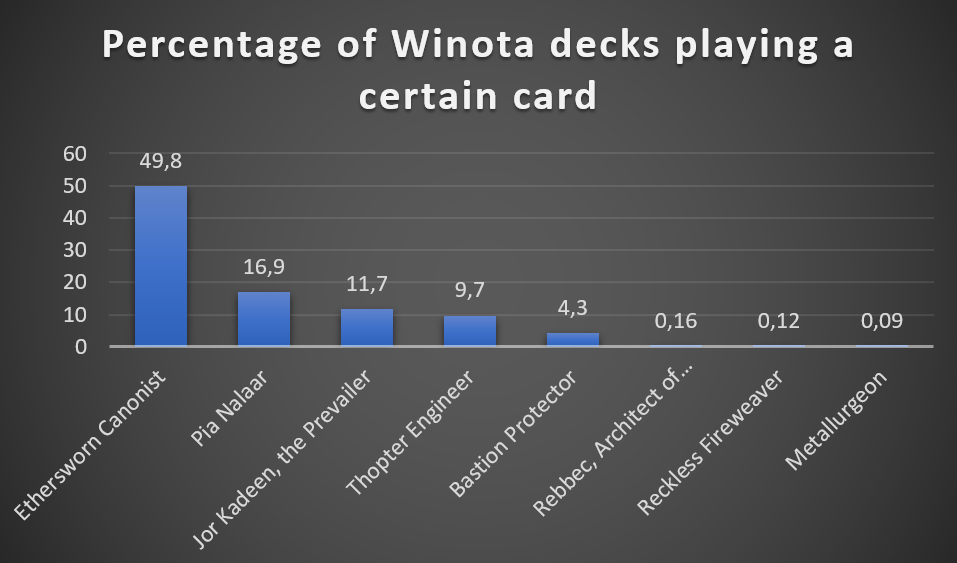 As the graph shows, we actually have something to celebrate. In fact, we were able to transform rarely played cards, such as Pia Nalaar, Jor Kadeen, the Prevailer, and Thopter Engineer, into key pieces of our strategy.

To better understand whether this deck was innovative or not, we also need to look at how other people usually build Myr decks. In particular, I'll take in consideration the average tribal deck lead by Brudiclad, Telchor Engineer, as it is the commander on EDHREC with the highest number of registered Myr decks.

Looking at that list, we can immediately see how many of the Myr we play are also present in this deck. In fact, 17 of them are usually present when Brudiclad is the commander as well. 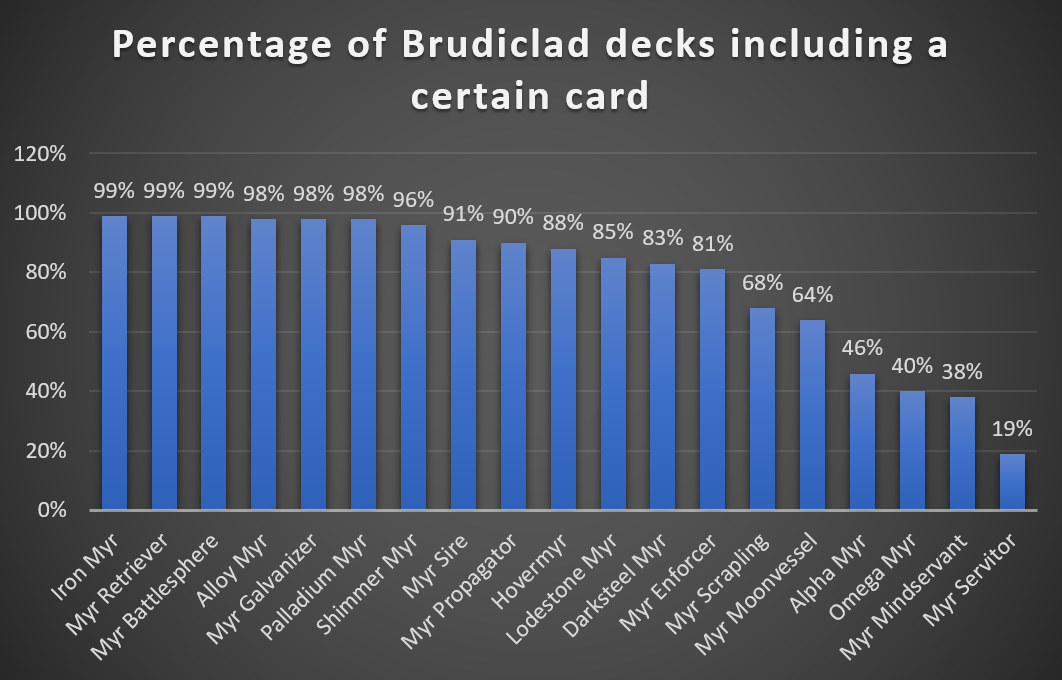 The numbers here are pretty clear and perfectly show how limited the number of available Myr is. In fact, none of the cards included in the graph is ground-breaking, yet 13 of them see play in over 80% of the list.

The Takeaways From Today's Article

That’s all from for the moment. I hope you enjoyed this deck tech, but now it’s on to you: what do you think of it? Would you have changed anything? Or there’s something you particularly liked? Most importantly, do you believe this was a true innovation? Let me know in the comments below!

Jonathan is an Italy-based Magic enjoyer that has been playing, although with some pauses, ever since Mirrodin released. His passion for EDH bloomed in 2018 and, with it, the love for exotic and underrepresented builds. When he is not complaining about an “unfair” removal, you can find him fiercely defending his Delver of Secrets at a pauper table.