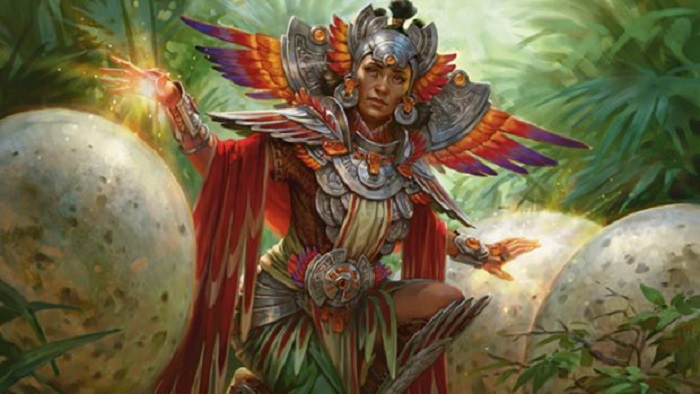 To Make a Deck, We Gotta Break a Few Eggs!

Hello again, Commander faithful! Just to be up front and honest, I am so excited to bring you this week’s article about an awesome legendary creature! Welcome to Uncomm-

Wait a minute… WRONG SERIES! That's right, loyal reader, we are once again experiencing Magic Christmas! It's that magical time of the year where Wizards of the Coast gifts us some amazing new cards, just for our favorite (and best) format in the game! Commander 2019 will have hit shelves well before this article is released into the wild, and while many people are talking about Anje Falkenrath of the Madness deck or Kadena, Slinking Sorcerer of the Morph deck, in this year's lineup I think the real standouts are the alternative legendary creatures in the decks. Very often, those commanders go criminally underplayed, but the ones from this year have been making quite a splash, some more popular than their own face commander!

Thus, it's time for me to put aside my regular Uncommonders series and switch now to Replacement Commanders so we can shine that spotlight right where it belongs! Let's jump right to it and talk about one of the Replacement Commanders from the Primal Genesis deck! She's one of my favorites from this year’s product and her name is…

When Atla was previewed, I was instantly in love. I normally gravitate more toward Golgari or Sultai decks and mechanics, while Selesnya and Naya typically don't not excite me. But this legend just looks like so much fun to build around! The idea of someone hatching eggs into big scary monsters is hilarious. Atla is also so awesomely Ixalan in her artwork that it's a total flavor win for folks who want to build Dinosaur tribal!

Let's not waste a single moment more! Time to tend some nests.

Get on the Floor, Everybody Walk the Dinosaur!

One of the awesome parts about building a Naya Dinosaur deck is that we don't really have to re-invent the wheel with it. Looking up Gishath, Sun’s Avatar will give us a good idea of cards to include. Honestly, the two commanders have much in common, as they both can be tooled to cheat out big, stompy Dinosaurs. Gishath even works well in the 99 for Atla, since it has haste and also helps spit out tons of creatures from the deck.

The other big bad of the Dino tribe, Zacama, Primal Calamity, also works quite well. Even if we cheat this into play from the library, rather than casting it from our hand to get its enter-the-battlefield trigger, those activated abilities are super potent, even allowing us to blow up Atla's Egg tokens whenever we want! I also especially enjoy the synergy with Forerunner of the Empire, as it can set up our next hatching Egg trigger.

You may or may not have already noticed, but I focused on getting as many ETB triggers from the Dinosaurs as we could manage, such as the new Apex Altisaur. There were some excellent non-Dinosaur support creatures that have good value abilities, like Wood Elves and Acidic Slime, that I also wanted to make room for. I think Atla could easily be worked into an “oops, all creatures” or even "Primal Surge"-style deck, though I chose not to be quite that hardcore on the creatures theme for this build.

I do want to note that Thornbite Staff and Ashnod’s Altar are an infinite combo with Atla. First, Atla is a Shaman, so the Staff will automatically equip to her. After that, you pay two mana and tap Atla to make an Egg, then sacrifice the Egg to the Altar for two mana. The Staff will untap Atla, and you will have the mana to pay for her activation again, so you do this until all your creatures are suddenly on the battlefield! Surprise!

I did include the combo in my list, but if you feel like your table wouldn't appreciate it, I advise removing the Staff and keeping the Altar. Free sacrifice outlets are just too good to ignore for Atla's awesome Eggs, and I made sure to include many in the list below to help us hatch more wonderful Dinosaurs.

For the first deck, we certainly included lots of creatures with ETB triggers, but the main theme was Dinosaurs for the win. For this second deck, I wanted to move away from Dinosaur tribal and towards ETB tribal...okay, I realize that "ETB" is not a creature type, but hang in there: a Scryfall search reveals tons of permanents with powerful ETB effects to choose from for the deck. I ended up straying much closer to an “all creatures” build, reserving only a handful of slots for noncreatures. Panharmonicon, for example, should be an obvious inclusion to amplify what our deck is doing. Our free sacrifice outlets like Goblin Bombardment are also still important to make sure that we can crack Eggs at a moment's notice.

Because this is a creature-based deck, board wipes can be devastating for us, setting us much farther back than other decks. To combat this, Teferi’s Protection works to keep even our Egg tokens around, while Heroic Intervention and other such effects also help keep our board safe. I also kept Worldly Tutor in the deck because the ability to set up our next hatchling at instant speed for just one green mana is fantastic, even if it's not the most budget-friendly card.

I also kept a few non-ETB creatures, mostly to grant haste, and Warstorm Surge to provide some additional direct damage or creature removal when our big, bulky creatures crash onto the battlefield. Surge also combos nicely with Panharmonicon, so this seems like a match made in heaven. This was the list that I ended up with by the time I had the deck trimmed down and the mana curve balanced (while still including our bigger threats):

When Atla was previewed, it didn't take long for people to start seeing the combo potential that we talked about before with Thornbite Staff and Ashnod’s Altar. The funny part about this combo is that people named it “Scrambled Eggs”! This made something click in my head, since we just recently got a legendary Boar creature… BACON and Eggs! That's right, we can build tribal BOARS!

(I will preface this by saying that the deck is more for fun, meme-y nonsense and is less about synergy and combos since Boars don't have much in the way of tribal cooperation)

We obviously want the biggest and the best Boar, Ilharg, the Raze-Boar, and we even have a few game-closers in the form of End-Raze Forerunners and Decimator of the Provinces. One thing that is important to note, though, is that Decimator needs to be cast in order to work, so there is a chance for non-bo if we crack an Egg into it. I also made a slight exception by adding honorary Boars Craterhoof Behemoth and Thunderfoot Baloth for the boosts and trample. Mirror Entity and Taurean Mauler are also technically Boar creatures, but I do understand that some people feel that including Changelings in tribal decks is cheating. I leave the decision up to you, faithful reader! Because we're cheating our creatures into the battlefield with Atla’s eggs, I don't mind running less-than-stellar creatures like Giant Warthog. Even Festerhide Boar works well since our constantly-dying Egg tokens will be able to allow that Morbid ability to trigger.

Since this is the third list, I want to point out that each of these lists has had Nesting Dragon in them. We want as many ways to get Egg tokens onto the field, and you double the value because you get the baby Dragon token in addition to Atla’s trigger. After these big pigs (and the must-have Dragon), I threw in the normal ramp, card advantage, and everything else a happy hog would need, and my list ended up looking like this:

The Beginning of a Beautiful Series

Wow, it feels good to be back on this series! I almost wish it could be Commander Christmas all year round. Still, it's fun to take these cards, which the precons are not built around, and build something better-suited to their own abilities. I'm looking forward to the rest of this series.

With that being said, I need to ask a question for this year: in the past, we've only covered the legendary creatures from the precons that can act as a commander right out of the box. This excludes the 'bonus' commanders' that are usually missing one color from the rest of the deck. For example, in this year’s product we have Tahngarth, First Mate in the Naya deck, Grismold, the Dreadsower in the Sultai deck, Gerrard, Weatherlight Hero in the Jeskai deck, and K’rrik, Son of Yawgmoth in the Rakdos deck.

What would you like to see? We can stick to what we've always done and only cover the legendary creatures that can swap into the command zone directly from the precon deck, or we can expand our scope this year and I'll write the four additional articles, one for each of these bonus commanders. What do you think?

Well, with that out of the way, we've reached the end of the first installment of Replacement Commanders of 2019! I'm interested in hearing about games you've played with the precons, especially if you've swapped out one of the face commanders for a replacement! Let me know in the comments below!