Replacement Commanders - I Vant to Suck Your Blood! 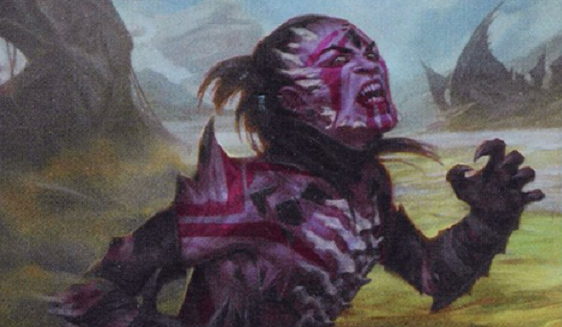 (Rayami, First of the Fallen | Art by Kieran Yanner)

This Vampire's Got Bite!

Hello there, Commander faithful, and welcome back to Replacement Commanders, 2019 edition! This series takes the spotlight traditionally aimed at the face commanders of the annual Commander precons and shifts it to the other legendary creatures that could helm the decks!

In the time since the last installment of this series, we've seen an incredibly exciting announcement from Wizards of the Coast regarding tons of extra precons next year! I am so pumped for the future of the format and this series. More secondary commanders means more awesome content!

Rayami, First of the Fallen

Rayami is a unique commander for a few reasons. Exiling creatures when they perish is reminiscent of Anafenza, the Foremost, but the collection of multiple keyword abilities is more traditionally associated with commanders like Odric, Lunarch Marshal. The EDHREC page for Rayami shows that people are running “keyword soup” packages to make Rayami more powerful by sacrificing creatures with unique abilities.

This strategy - sacrificing creatures for Rayami's benefit - originally made me lean towards including Grave Pact effects in Rayami's deck. However, that strategy means we would be relying upon our opponents to run creatures with keyword abilities that we want Rayami to obtain. This is a tough thing to accomplish. However, if our goal is to have more control over the game, it might actually be more prudent to take things in the more literal sense and steal our opponents' creatures, with the bonus option to sacrifice them to pump Rayami as necessary.

A second characteristic that stands out to me about Rayami is a more obvious one: he’s a Vampire… in green! I am a massive Vampire fan in all games, and especially in Magic. I run my own Edgar Markov deck, and once upon a time I ran Marchesa, the Black Rose as a surprisingly strong and resilient Grixis Vampire commander. Getting another legendary Vampire in a new color feels amazing, and I drool at the idea of making another Vampire deck that is somewhat off-meta and janky!

Each of these build paths sounds pretty cool for Rayami, so let's see how they each fare with some actual decklists!

We'll start with the more traditional strategy for Rayami: keyword soup. However, before we get into the more unique builds for Rayami, I want to address the EDHREC page data for him. Looking at the page, we see that a good chunk of the Top Cards and High Synergy Cards are essentially vanilla creatures that happen to have one or two keywords. Here we find cards like Banehound and Slippery Bogle, which are just there to give Rayami cheap access to good keywords. To be clear, there is nothing wrong with this strategy, but it does make me think that I want something more out of my creatures than just a keyword. I want to tackle what I think might be a more interesting version of a typical Rayami deck.

Some of the cards that came to mind for this deck are on Rayami's EDHREC page, but farther down than some might scroll. Cards like Mulldrifter and Baleful Strix are more my speed. They have keywords that Rayami can benefit from, but they also have great individual value on their own. Hydroid Krasis is another; it has some powerful keywords, and a powerful ability to gain card advantage. I also really enjoy the three accessible Gods from Amonkhet: Bontu the Glorified, Rhonas the Indomitable and Kefnet the Mindful. Not only can these creatures give Rayami indestructible if they're sacrificed, but their activated abilities are extremely relevant. Rhonas also works well with Rayami; he can be cast on turn three, see Rayami the very next turn, and start attacking right away. It’s a sweet curve, and that type of power is nothing to scoff at.

Some of the ramp and card advantage included will synergize specifically by allowing creatures to be sacrificed or killing creatures as an additional cost or effect. A simple Primal Growth or Bone Splinters can do quite a lot of work for Rayami! Tossed all together into a list, it will come out looking like this:

What’s Yours is Mine

When I got back into Magic around the time of Return to Ravnica, I fell in love with House Dimir. I love sneaky thieves and political intrigue in my stories, so they were right up my alley. I mention this because one of the things I have come to expect from blue and black decks is a certain level of thievery cards, such as the aptly named Blatant Thievery. Instead of trying to run hard locks on the battlefield and hoping that our opponents sacrifice creatures with good keywords for Rayami, we can just go ahead and steal them for ourselves. This way, we force our opponents to waste removal spells on their own creatures, and any deaths Rayami witnesses may have the happy byproduct of pumping up his list of keywords.

I will admit, in looking over the Theft theme page on EDHREC, that lack of access to red makes the thievery strategy a bit tough. There are so many Threaten effects in this color. Still, gaining green gives us an unusual advantage, namely in its sacrifice outlets. Eldritch Evolution and Birthing Pod, for instance, can turn any creature we steal into a new big baddie. Sacrificing a stolen creature to Life’s Legacy or Momentous Fall feels a lot better than sacrificing our own creatures to them. Also, since this deck is all about stealing things, we get to play an iconic card for the archetype: Villainous Wealth.

Along with some more card advantage, Wraths, and my favorite of blue’s numerous ways to steal or control enemy creatures, I came up with the following list:

To start this off, I want to answer a question that I am sure many of you are going to want to ask: yes, I will take every opportunity to make stupid, off-meta, janky Vampire tribal decks. Every. Opportunity.

With that out of the way, I was pleasantly surprised by how many Vampires fit into the Sultai colors. As I stated in the beginning, there is only one green Vampire (Rayami) so most of our creatures are black. For this list, I decided to lean more into the strengths of the individual colors, allowing green to provide that which blue and black lack (removal of enchantments and artifacts), as well as the beefiest part of our ramp package. I also took an opportunity to run my favorite card in all of Magic, Triumph of the Hordes. Since so many of our creatures are going to have evasion or flying, it works as a fantastic finisher. What better way for a horde of Vampires to win than by killing opponents with in infectious disease?

Many of the Vampires in Magic’s history also work as sacrifice outlets, which fit in nicely with our commander. Viscera Seer is very well-known, but Yahenni, Undying Partisan and Indulgent Aristocrat are also great sac outlets. Going back to the theft theme we discussed above, Captivating Vampire and New Blood allow us to turn our enemies into our friends, and then utilize those bodies to fuel our strategy and make Rayami stronger. One Vampire I specifically want to highlight is Bloodtracker. Rayami shuts off a lot of "when this creature dies" triggers (hence the reason why cards like Cordial Vampire were excluded from this list), but Bloodtracker triggers when it leaves the battlefield, so we'll still draw cards even when Rayami exiles it.

Wrap the whole list up with some of our favorite methods of card advantage, board wipes, removal, and ramp, and we should see a list that looks something like this:

Rayami was the legendary creature from Commander 2019 that I was the most excited for, but which also disappointed me most when I initially tried to brew him. I was slightly worried about writing this particular article, but luckily I was inspired by the folks in the Praetor Magic Discord server (which, of course, you can join if you want to be a part of a growing online Magic-loving community). That’s the beauty behind the legendary creatures of these products; the face commanders are all sweet and do well with their deck themes, but the Replacement Commanders all stick out in unique enough ways that require a lot of extra thought, but which offer some great rewards when you put in the work. This is what keeps this series such a joy to write, and I can't wait for all the awesome new commanders we'll get next year!

On that note, I need your help again, Commander faithful! In our next article, we'll be hitting up one of the "bonus" commanders from the precons, the ones that are missing a single color of the overall deck. We've already discussed K'rrik, Son of Yawgmoth, but which one would you like to see next?

Until next time, friends and readers, make sure you’re following me on Twitter, and check out the Praetor Magic YouTube channel for more wonky decks from your favorite Vampire-loving writer! As always, thanks for reading!