Replacement Commanders - Let the Hate Flow Through You! 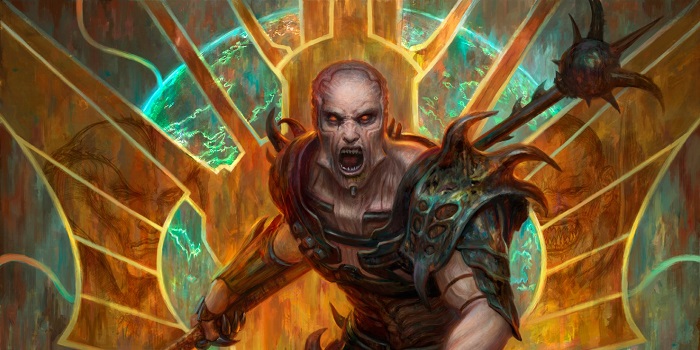 Captain of the Predator, Master of Pain!

Hello again, you wonderful Commander faithful! Welcome back to Replacement Commanders, everyone’s favorite series where we look at the legendary creatures that come in the annual Commander precon product that were not featured on the front of the boxes and build them a deck designed to spotlight their own unique abilities!

Last year was unique for the product because, normally, the cards that wind up on the face of the different decks are the more powerful cards and the replacements can feel somewhat lackluster. We’ve mentioned in previous articles this year that some of the replacements were the real bombs of their decks (looking at you, Elsha of the Infinite, in the somewhat disappointing Sevinne, the Chronoclasm deck) but it’s crazy to think either of the two Rakdos replacements could be the 'bomb' when compared to the face of the deck, Anje Falkenrath. After all, Anje has broken into the competitive scene and remains the #1 commander from the whole product, so naturally, she must be the coolest of the deck, right? Well, today’s Replacement Commander may have something to say about that. We're shining the spotlight on…

I want to make one thing perfectly clear before we get too far into this list: the inner Spikey aggressive player in me is in love! Greven does so many things that have little bits of value adding up to something very interesting. When I first saw him back in the preview season, my first thought was, “Is it possible to make a Ball Lightning tribal deck?” While their lower toughness would mean Greven wouldn't get as much of a power boost, the high power of the sacrificed creatures would keep us drowning in card advantage, giving us the chances to find other cards to end the game quickly while still abusing our Warrior commander’s abilities. Another possibility that came to mind was “tribal” Threaten effects and constantly stealing the biggest creatures, then using Greven’s attack trigger like a removal spell.

Looking at his page on EDHREC, it seems like my first impressions were not far off. Not only is Ball Lightning listed fairly high on the “Creatures” part of his page, but Lightning Skelemental is listed under High Synergy Cards, and “Theft” is even one of the archetypes people are building for him!

The icing on the cake is seeing Tainted Strike also in his High Synergy Cards section, and you all already know what I’m thinking! I won’t waste anymore time because this deck is going to be FUN!

I Need to Borrow That!

People who know me probably know that I’m no stranger to putting my own creatures into the graveyard from the battlefield. Greven’s attack trigger is honestly one of the things I really enjoy about him, because it opens the potential to play a Rakdos reanimator-style deck where we constantly sacrifice our creatures to Greven, and then bring them back. Rinse and repeat. However, since we're already in red, there’s no reason we can’t take donations from the rest of the table for our cause. One of the many things red is known for is Threaten effects, only outdone by blue’s ability to steal things permanently. These effects are going to act as removal spells and draw spells with Greven, meaning they have three times the value.

I’m a sucker for repeatable effects, so Captivating Crew is probably one of my favorite versions of these effects. Provided we can keep it on the battlefield, this is a (sorcery-speed) mana sink to either provide fodder for Greven or simply to pound our enemies with before they can pound us. Word of Seizing and Grab the Reins are instants that threaten, while Seize the Day is two potential threatens, thanks to Flashback. There are a plethora of these effects at sorcery speed, and I focused on the lower-costed ones for the sake of mana efficiency. I do want to draw attention to the fact that I omitted the use of multi-threaten effects like Mass Mutiny, despite seeing them on the EDHREC page for Greven, mainly because they're more expensive and we can only sacrifice one creature for Greven per combat. Probably the only effect like this that I would consider (though I didn't include it in the list) would be Insurrection as a potential wincon if we can steal the entire battlefield and kill the strongest player. Of course, if your meta is token-heavy, you may want to consider it, since the value could be higher if big battlefields are common at your tables.

Greven Needs Some Give and Take

There’s a portion of our deck that helps us lose health to power up Greven for that one big boop to our opponents. Whenever we’re piloting an aggressive deck like this, it’s important to remember that we must outlast the rest of the table. Because Greven is essentially a Voltron deck, this can potentially be even harder. Then pile on how we must pay health for value, and we have a very real chance of getting too low and getting knocked out of the game ourselves, so, it’s important to include some ways to keep our life bountiful, as we want to do with any other resource in the game.

Kokusho, the Evening Star is one of the perfect creatures for something like this. Not only will we get to draw tons of cards from sacrificing Kokusho to Greven, but the life we lose from the toughness is instantly negated, and then some, with Kokusho’s death trigger. Even if we’re casting and sacrificing Kokusho toward the end of the game when there’s only one opponent left, we get to break even just from the sacrifice and death trigger. Whip of Erebos and Basilisk Collar are also ways to gain life, and since Greven is already a 5/5 body, we do overall gain life from attacking and sacrificing anything once we hit. Gray Merchant of Asphodel is a staple in black decks, and this is no exception. Even with just Gary and Greven in a four-person game, we’re gaining nine life back and losing four if we sacrifice Gary to Greven. Loxodon Warhammer is a great Equipment for Greven, giving him even more evasion on top of his natural menace.

The Value You May Not Notice

Normally, I just add a single line about “wrapping the deck up with card advantage, removal and Wraths” to always remind everyone that support cards are always necessary, no matter what your theme or strategy is. That’s true with Greven as well, but I wanted to point out some of the interesting staples that come with extra value in the deck. Most if not all of these cards are good enough to run in any Rakdos deck. Read the Bones and Sign in Blood are not “secret tech” in black decks (they appear in nearly 18,000 and 11,000 decks, respectively), but their life loss “downsides” actually become upsides, giving us more power for Greven. Tragic Slip shouldn’t surprise anyone in this list, since, provided Greven sticks around to attack, we are almost always going to be able to get the -13/-13 effect relatively easily. Paying attention to these little details can sometimes make your deck not only more synergistic, but more fun to play and enjoy!

You know what to do. Wrap it all up, stick a bow on it (a red one, because Rakdos), and the list should look like this:

Greven, Champion of the… Vampires?!

I wrote a little extra on the “precon-like” list for Greven because there are so many intricate little details to consider. I don’t want to blather on for another page, so I’m going to summarize my personal take on Greven into two words: Tribal. Vampires.

What?! It’s not as crazy as you may think. The idea originally came when I thought about using New Blood to permanently steal something. While that isn’t as important with Greven, it did make me remember Olivia Voldaren and Captivating Vampire, each of which seems like powerful cards for Greven. Because Captivating Vampire requires five total Vampires, I went all-in on the tribe, and honestly, I don’t hate the theme. I even get to include one of my favorite Vampires in the entire game, Bloodtracker! The card is a bomb of value, helping you make Greven hit hard, being a flying beater that can grow and drawing tons of cards whether he dies to removal, Greven or even gets exiled or bounced!

Here, take a look at the list and let me know what you think in the comments below:

Friendly reminder/disclaimer: these second lists are less about making a "precon"-like deck and more about me trying to apply a unique theme to the commander in question. There's less budgetary restrictions, so that might explain why you'll see some very expensive cards selected!

Ten Down, Two to Go!

The first article for this year’s Replacement Commanders was published on 13 September, 2019. Considering this article should be published on 14 February, 2020 (happy Valentine's Day!) that means the series has stretched across five months! This has been an insane, fun ride of articles and we have a single month left before we’re done.

If you don’t want to wait two more weeks for Magic: the Gathering and Commander craziness from me, though, you can always chat with me via Twitter, the public Praetor Magic Discord server, any of the times the team and I are streaming on Twitch or leave some comments (as well as likes and subscriptions!) on our YouTube videos. Hope to see you out on the ol’ social media network and until next time…