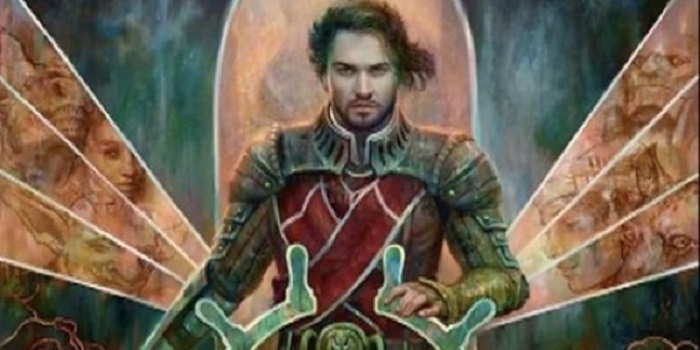 This Hero Saves Your Creatures and Artifacts!

Hello again, Commander faithful! Welcome to both an awesome and a sad installment of Replacement Commanders, the series dedicated to taking the new legendary creatures that didn’t make it onto the face of the packages for the annual Commander product and building precon-like decks around their own unique, powerful abilities! The reason this installment is a little sad is because it is the final one for the 2019 precons. We've looked at all the new Replacements, including the four bonus “missing a color” commanders that you, the lovely reader, voted to have covered this year! There’s an upside to this year’s edition ending, however, and that is that we'll be getting back to Uncommonders for a little while until the new precons come out with Ikoria: Lair of Behemoths in April. While I am very excited for the big monsters that that'll bring, we have the final replacement commander and the final “missing a color” commander to talk about for this year, and that is…

I’m always as honest as I can possibly be with all of you readers. When I don’t like something, I try to let you know, even though we always go through all the commanders because that’s what this series does. Sometimes I maintain my feelings even after the article and the builds we come up with. Certain cards (looking at you, Rayami, First of the Fallen) are simply less powerful than some other cards (like, say… Anje Falkenrath) With all of that being said, I think it’s rare that I start off an article saying that my opinion of a new commander has massively changed in the time since it’s been released up until the time of writing the article. Well, there's a first time for everything!

When Gerrard was first revealed early in the preview season of Commander 2019, I wasn’t sure what to think. Then people started talking about “Eggs” or “Cheerios” decks, which tend to be combo decks that not as many people enjoy playing against. After hearing that, I didn’t put much thought into Gerrard until it was time to write this article. Looking at the data collected by EDHREC for him, however, I see some of my favorite Boros artifacts-matter cards! Then, seeing “Sacrifice” as one of his associated themes, my Sultai-colored heart was beating like a drum, and I'm more than excited enough to dive into this recursion fun!

A Foreword: Gerrard on a Budget

Before we get into the deck and the cards, I want to talk about the budget and how it affects the way these lists come out. I’ve been mentioning it more often in these articles, and that's partly to keep myself in check: talking about it reminds me to go back and check lists to see if a $20+ card slipped into the list. This list, however, proved to be a bit difficult. Some of the cards I wanted to include are currently high in price, but I think part of that is due to their limited availability. Two of the cards shown above, Dockside Extortionist and Teferi’s Protection, were only printed once and for previous years’ Commander product. Since they were printed for this product, I felt like including them in precon-like decks was justification enough. For Krark-Clan Ironworks, I figured there was room in the list for one “big” reprint (sorry, no Purphoros, God of the Forge or Wheel of Fortune) that would be great in the deck. Aside from that, I kept to my normal limit of $10-12 cards being the max with certain other staples being exceptions. Just something to keep in mind if you’re thinking about expensive cards that might appear in a list like this.

Putting Stuff in the Bin!

When your commander has mass recursion printed on it, people are going to look for ways to remove it before you have a chance to set up your tricks. With that in mind, one of the most important things for this deck is free sacrifice outlets so that we can respond to someone trying to target Gerrard when nothing has gone to the battlefield this turn. Normally, free sacrifice outlets aren’t that hard to find in Magic, but because Gerrard works with artifacts, as well, and since there are so many interesting artifacts that have enter-the-battlefield effects, and even some that care about leaving the battlefield, finding outlets for artifacts that aren't also creatures can be slightly trickier, especially since we want to make sure that they're something we can do repeatably and at instant speed.

We touched on Krark-Clan Ironworks, and that is probably one of the most powerful and useful of the bunch. It also probably enables the most shenanigans, giving us more mana to keep doing things as we sacrifice our artifacts. Slobad, Goblin Tinkerer is another free outlet for artifacts, while Claws of Gix and Makeshift Munitions are sacrifice outlets that just require a single mana. For creatures, there are even more, and we’re going to run a few for the sake of redundancy. In addition to the two shown above, Altar of Dementia can be a unique alternative wincon if we can loop some mills and recast Gerrard a couple of times with big, beefy creatures on the field to come back for more milling. Ashnod’s Altar is another mana source like KCI but for creatures and can lead to some of those looping plays we just spoke about.

How Do We Win?

To start this part of the list, I just want to say that Gerrard's EDHREC data has picked up three or more mass land destruction spells, and even coming from the guy who is amicable with the concept, you’re all monsters! For shame!

Kidding aside, I wasn’t sure how MLD would go over as a potential wincon for a precon-like list, so I chose to shy away from those cards. With Purphoros, God of the Forge being so expensive, I found it hard to justify, so I loaded up on similar effects, like the two featured above; Warstorm Surge can put in a decent amount of work with some of our beefy creatures entering the battlefield.

Speaking of being a terrible person, yes, I realize there is a Yosei, the Morning Star in the images above and in the decklist below. The most I can justify the inclusion is that, aside from Gamble, there are no tutors in the deck, and while it is possible to Yosei more than once in a turn with Gerrard, it is less likely to become a lock due to commander tax adding up. The hope and intent behind having the card in the deck is that it will help a Boros deck, which traditionally struggles against other color identities, be able to stumble whoever the top player at the table is long enough for either a temporary ally or ourselves to catch up and knock them off the top of their pedestal.

Still, no deck is complete without all the card advantage and ramp a Boros deck can muster, along with some good ol’ wraths and removal to make something that looks like this:

For the second list in this article, I can take no credit for the idea. Andrew Cummings, another fantastic EDHREC writer, mentioned that he had a friend who had built a deck based in this concept, and, looking into it, I decided it looked exciting and interesting. There are only thirteen Boros-legal Modular cards, most of which from the Darksteel and Fifth Dawn sets, but they're all artifacts and creatures. This means the shell of our precon list will be reusable, with some upgrades since we are free from budgetary restraints in this second list. I didn’t find a specifically Modular theme page for EDHREC, so I looked at the pages for +1/+1 counters, artifacts, and the page for Arcbound Ravagar, the highest EDHREC-ranked Modular card according to Scryfall, for some ideas.

The Khans of Tarkir block provides some gems for this concept, giving us flying, lifelink, and first strike thanks to the Abzan Houses, and then Elite Scaleguard provides evasion. There are also some normal great cards for “counters matter” style decks like Contagion Clasp and Contagion Engine, Karn’s Bastion, and Sword of Truth and Justice. As if the deck did not have enough recursion, Together Forever is a personal favorite card of mine and works well in the list. For a game-ender, and because I’m an awful human being, the idea of making one huge Blightsteel Colossus and getting my favorite number (it’s ten!) of poison counters on someone. Blade of Selves is also in the list, both as a means of making multiple Colossuses, but also to make copies of our Modular creatures, which we can then sacrifice before the end of the turn for more counters.

Overall, the list looks a little janky, but this is what it came out like in the end:

And that’s it! We've covered all twelve of the replacements from the 2019 edition of our beloved Commander product! I’m always sad to see the series go, but this year it might not be gone for very long. With Ikoria: Lair of Behemoths coming in April, we may be thinking about even more replacements before you know it, so I’ll do my best to cover the most interesting Uncommonders before then. You can see some of the ones I’m the most interested in above!

But as always, if the next article is going to take too long and you want to talk about Magic: the Gathering with this nerd right now, you can always follow me on Twitter! I also produce a few different streamed shows over on the Praetor Magic Twitch channel, which then get uploaded to the YouTube channel. And you can always find me on the public, free Praetor Magic Discord server for some good ol’ Magic talkin’! Until then or the next article…