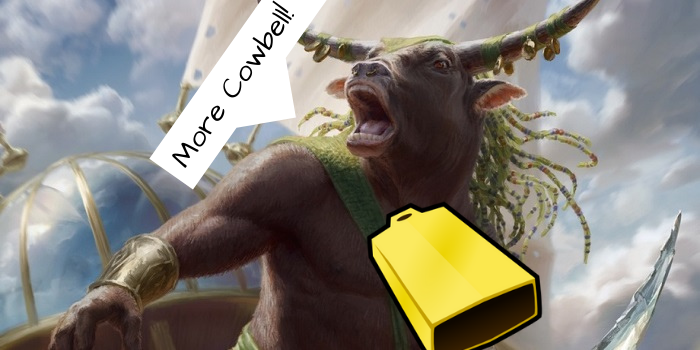 Your Deck... It Needs More Cowbell!

Hello again, Commander faithful! Welcome back for another installment of Replacement Commanders, the series designed to look at the legendary creatures from the annual Commander precon product that didn't make it onto the face of each deck, and build a precon-like list specifically for them! Each year, we get these amazing commanders that are placed in decks built around a different legendary creature and those abilities and strategies. The series is quickly ending, though I have no idea how soon we'll have even more replacements, what with 2020 being the “Year of Commander” for Wizards of the Coast.

In the last article, we ended with a poll for the remaining two legendary creatures that are missing a color from the decks they were originally printed in. Readers got to vote on which to cover first, and which would be the last of the series. It was close in the end, but most of you wanted to see…

Admittedly, Tahngarth was not high on my rankings of legendary creatures from last year’s product. For as much as I enjoy the way his first ability works when we can give him menace, nothing in his second ability prevents the person we loan Tahngarth to from just sacrificing him. As someone who loves to use and abuse sacrifice outlets and strategies, it’s mildly unnerving to see a commander that wants to go under other people's control without having the same kind of protection that an Assault Suit would give. However, looking at the EDHREC page for Tahngarth, we can see that people have gravitated more toward an Equipment-based Voltron strategy. This makes me like the way the deck is bound to turn out, as it means that even if there are sacrifice players at the table, it shouldn’t be hard to suit up Tahngarth and get the work done ourselves.

For those games where there are no sacrifice players at the table, a third archetype that people are using with our Minotaur Warrior is “Forced Combat.” Ironically, I said in the last Replacement Commanders installment that I didn’t think this was a category on EDHREC, and it looks like I was wrong! Of course, we shouldn’t be surprised to see how thorough the site’s themes are. After all, it collects so much data from around the internet, I’m sure we have a snapshot of every kind of archetype in the format!

The Equipment and Voltron parts of Tahngarth are interwoven, as one of the best ways to make him hit hard and fast is to pile him up with Equipment that makes him stronger. Whenever I look at a commander that wants to wear a lot of Equipment, I always think that, while there should be some bomb cards that shock and awe the table, it’s just as important to have Equipment that act as support cards. This way we don’t have to make the tough choice between taking up card slots on Equipment vs. taking up slots on ramp, removal, etc.

Sword of the Animist and Prying Blade provide different variations of ramp, while Rogue’s Gloves and Mask of Memory give us some incremental card advantage. Argentum Armor and Sword of Sinew and Steel will get rid of a few pesky parts of our opponents’ battlefields. We will need to also include those bombs that will turn our commander into a one-shot machine. Embercleave has been tearing up the Standard scene and still has massive value in Commander. Blackblade Reforged is another great option, especially given that we’re in green and will have access to many ways to ramp with our lands. This next card is going to surprise some of you to list as a “bomb” card, but Bloodthirsty Blade does a surprising amount of work to facilitate Tahngarth's strategy, ensuring the rest of the table joins us in the red zone.

This Minotaur Brings the War!

In our last article for Marisi, Breaker of the Coil, we discussed cards that force combat for the table. This means that it's slightly awkward to have another such theme for this article, especially when the commanders share two colors (out of a possible three from Marisi). I don’t want to focus too much on the cards that we went over in the Marisi article that also appear on Tahngarth’s EDHREC page, so instead I want to focus on some other cool cards that are unique to Tahngarth.

Vow of Wildness and Vow of Lightning are interesting, inspiring enemies to attack each other with some extra damage, while not being a bad fit on Tahngarth as well. Curse of the Nightly Hunt can be tricky, since the enchanted player may point their aggression in our direction. Still, this opens them up for attacks from our other opponents, so there is room to play the political game, making deals about who to give Tahngarth to, depending on who wants to attack us. Incite War is a unique card for this situation, giving Tahngarth first strike before he runs out to assist someone who suddenly is compelled to do some damage on their turn!

A Warrior From the Stars? (Get it? Constellation!)

Something caught my eye when I was reviewing Tahngarth’s EDHREC page: Bear Umbra. It got me wondering how many Totem Armor enchantments there were in both green and red, since I am aware of quite a few in green and white. A quick Scryfall search showed me that there are only five Totem Armor cards in our colors. Then I added Constellation into the mix. This added eleven more cards to the idea, and with sixteen total, I decided to go all-in on an enchantment version of Tahngarth!

Some of the Constellation cards I want to draw special attention to are Nylea’s Colossus and the new Setessan Champion from Theros Beyond Death. Colossus turns Tahngarth into a massive threat very quickly, while Champion is another Enchantress-style effect, which is going to be a major subtheme for this list. Naturally, Eidolon of Blossoms is another great Constellation card for card advantage, and we're going to include Argothian Enchantress, Enchantress’s Presence, and Verduran Enchantress as well, so we can draw all the cards! Since this list won’t be running Equipment cards as our bombs, Runes of the Deus works similarly to Embercleave, while Ancestral Mask might just end games. Destiny Spinner seems like a great way to keep control decks from stopping us, while cards like Eternal Witness and even Road of Return give us some recursion.

NOTE: Just a friendly reminder that this second list is less about that "precon" feel and more just "What would Seth do with this commander?" Therefore, there is less of a budget restriction in the list, hence seeing cards like Taiga!

First Mate, But Not the Last Replacement!

Phew! I won’t lie, this was not the easiest article of the series to write. As I said in the beginning, in my eyes, Tahngarth was not the most interesting legendary creature to come out of this year’s product. Still, that is obviously down to personal preference, and I recognize that Tahngarth is still a very powerful commander with explosive plays. I'm both very excited and very nervous for this year, since we're getting so many additional precons. Hopefully this means we'll be getting an even wider array of unique abilities and strategies to play with!

There are three more Replacements left to go over for the 2019 product, and they have some spicy, interesting builds to investigate! Of course, if you need some more Commander talk in your life, you can follow me on Twitter or join the public Praetor Magic Discord server. Praetor Magic is the content creation team I run with my wife and some friends, so feel free to check us out throughout the week on Twitch or see our previous content on our YouTube channel! Until next time…