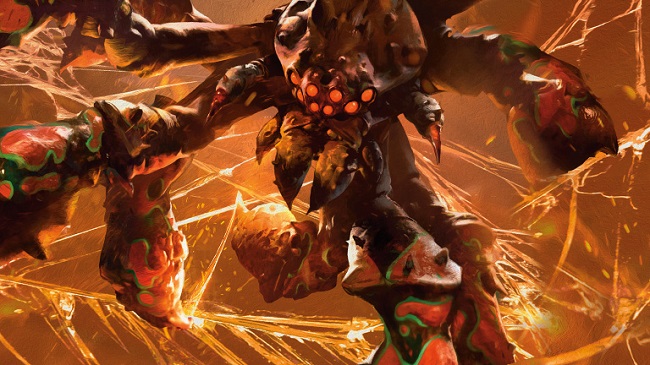 She's Creepy, Crawly, and She'll Spin You Right Round!

Here we go again, my lovely readers! My name is Seth Cross and this is a very personally interesting installment of Replacement Commanders! This series works to highlight the new legendary creatures that appear in each of the annual Commander products that are NOT the face card for each deck! While the face cards of the 2018 product, Lord Windgrace, Estrid, the Masked, Saheeli, the Gifted, and Aminatou, the Fateshifter are all amazing and powerful cards, there are two new commander-capable legends in each deck that always feel like they do not fully synergize with the precon decklist. During last year's release, commanders like Mathas, Fiend Seeker and O-Kagachi, Vengeful Kami may have fit into their respective tribal decks, but they did not synergize specifically with those tribes in any other way. O-Kagachi, for instance, is a better-known commander for tribal Spirits, not Dragons! With that in mind, we look at each of these unique and brand-new legendary creatures, evaluate their stats, abilities and colors and build decks that are meant to bring the spotlight to shine directly on them!

Last time, I was very excited to write about Yennett, Cryptic Sovereign because the card seemed interesting and unique. In my opinion, most of the Replacement Commanders this year were cool new cards, and while they did some things different from the overarching theme of their respective decks, they tied into the theme's synergies. There has been back-and-forth talking throughout the community with this year's product in regards to this topic. While I will not get into the concept of whether the reprints were good, I was one of the people saying that the two new Jund (black, red, and green) legendary creatures were not within the advertised “lands matter” theme and it originally upset me. During the preview day for the Jund deck, I saw the card we're going to talk about today, and was not thrilled. That card is… I have said it before and I will most likely say it again; I strongly believe in being transparent about how I feel about the cards I write about. I never want to hype cards up just for the sake of an article or a series and I want to express when something does not excite me or even blatantly makes me roll my eyes. Overall, the concept for Thantis did not give me something to look forward to writing about originally. Even still, some ideas sprang to mind, like Jund Spider tribal, forced combat shenanigans, and +1/+1 counter synergy, but those lists did not get me motivated to write this article like the ideas for Yennett did. So, I asked for help from the folks on my public Praetor Magic Discord server, and let me tell you, the conversation ended with me being absolutely thrilled to write this article!

But before the decks, let us evaluate Thantis. As I said before, Thantis is a legendary Spider in Jund colors. Before this, there was only a single other legendary Spider ever printed, back during Eldritch Moon: Ishkanah, Grafwidow, in just Golgari colors. Having an extra color in red is interesting, because there have been quite a few new red cards in recent sets that can potentially make even tribal Spiders fun to play. Thantis has decent base stats as well. With a power and toughness of five, and natural vigilance and reach for just six mana, that is a great investment and brings up the potential for hitting blackjack in a Voltron strategy. This is supported even more so by the ability for Thantis to gain +1/+1 counters through her own forced combat, and the fact that green and red have ways to grant trample in the event that the rest of the table thinks their puny creatures are going to stop us! Finally, forced combat has been a strange mechanic throughout the history of Magic: the Gathering, and I think that Thantis' color identity lends us some interesting options for how to build a warmongering deck!

Say Hello to Her Little Friends!

Ever since Ishkanah was released in Eldritch Moon, people have been in love with the fact that they can build tribal Spiders. The fact that the legendary Spider does become more powerful from having more Spider creatures feels even more like a tribal theme, even though the tribal does not have much support like most other tribes do. Honestly, there are not very many Spiders in the first place, with only 47 total in the right colors for Thantis. As I write this, the EDHREC page for Thantis is not focused on Spider tribal, so I utilized the page for Ishkanah, mixed with the page for Jund commanders, to find staples to look at. Some of the all-stars for the deck look to be Silklash Spider, Spider Spawning, Arachnogenesis, and of course, Ishkanah as a powerful closer. Spiders are notorious for having more toughness than power, so Assault Formation cannot go wrong, along with Ikra Shidiqi, the Usurper for redundancy. I also happen to be a sucker for cards that fill one of the core categories of a Commander deck (draw, removal, ramp, etc.) and which also happen to be on flavor, so Eaten by Spiders makes the cut! Some spiders are deadly poisonous, so I can find room for potentially one of my favorite green cards, Triumph of the Hordes to swarm our enemies with Infect.

Since we have access to red as well, I like Trove of Temptation to get the Treasure tokens, as well as forcing our opponents to attack us and grow our commander. We can run Anger, Fires of Yavimaya, or Hammer of Purphoros for haste enablers. We cannot forget one of the best recently-printed red cards, Sunbird's Invocation, for that sweet value of casting free spells! Finally, since we have the potential to go wide, I think both Xenagos, the Reveler and Arlinn Kord can be powerful Planeswalkers in the deck! Here is what I think the list would look like;

Burn the House Down, That is One GIANT Spider!

Sure, the idea of swarming a table with Spiders and terrifying our opponents to death is cruelly satisfying, but I also think the shock and awe of a giant Spider coming out of nowhere to obliterate life totals is also a fun way to play the game. Thantis has the potential to become a huge creature naturally, forcing attacks from the entire table, but I think we can do even better! For this deck, I used the Jund page combined with the +1/+1 Counters Theme page and a glance at the page for Kresh the Bloodbraided.

The great part about Thantis's forced combat ability is that we do not have to focus on evasion, since it will become much harder for enemies to leave up blockers. The overall strategy here should be to maximize the use of the +1/+1 counters while punishing opponents for poor attack choices. Trove of Temptation seems to fit in this list as well, along with Disrupt Decorum, interestingly enough. While I understand that Goad forces people to attack each other and not you, this card can be our savior in the right time when an opponent has a lethal field and we do not want them pointing their damage in our direction. We naturally want to see Reyhan, Last of the Abzan, Corpsejack Menace, Winding Constrictor, and Hardened Scales to turn a single triggering of her ability into a whole bunch of counters.

The new Xantcha, Sleeper Agent can fit in nicely with our political forced-combat theme and draw us some cards. One of the most interesting thoughts we came up with in the Discord server was putting Varchild, Betrayer of Kjeldor and cards like Pyrohemia, Pestilence, and Pestilence Demon to prevent a counterattack by non-Survivors. Since we are utilizing counters very often, I love the idea of having Hapatra, Vizier of Poisons, The Scorpion God, Contagion Clasp, Contagion Engine, and even Black Sun's Zenith for an on-theme Wrath. This is overall what I think the deck would look like;

Weaving a Web of War

One of the first things that turned me off from Thantis when she was previewed was that she forces combat. My assumption was that everyone was basically going to turn the game into Archenemy, and the Spider player would end up dying immediately, then get left shuffling on the side, waiting for a new game to begin. However, after discussing ideas, several cards were brought up that I think would make people think twice about dogpiling us while we weave the web of war in the background! People might attack us, but with Kazuul, Tyrant of the Cliffs that will only give us an army! I like the idea of getting the Varchild, Betrayer of Kjeldor card in this list as well, as well as Rite of the Raging Storm. A friend suggested Sandwurm Convergence for both the limit it places on enemy attacks and the simple fact that it gums up the ground with big Wurm tokens!

We can do some rude stuff with War's Toll in the mix, and Urabrask, the Hidden will make creatures played after combat unable to block. We are one color trade short of having Gahiji, Honored One but we can still fit in Crown of Doom. Since we are encouraging the table to attack, why not give them more creatures to attack with, via both Hunted Troll and Hunted Dragon? No Mercy will make our opponents think twice before hitting us with these gifts.

Another idea that we discussed in Discord was Thantis, Spider Queen. How do you make a Spider a queen, you ask? I mean, all you need is a crown, and it turns out there's a crown on the Monarch! This is one of my all-time favorite mechanics in all of Magic: the Gathering and I strongly believe the Rules Committee should instigate a rule where the first person to deal combat damage to another player in Commander becomes the Monarch, just to ensure the mechanic sees play in every game. There are several Monarch-granting cards in Jund, so I threw in my favorites and finished the list down below!

I have mentioned before, especially in the first edition of Replacement Commanders, that Wizards sometimes does not sell me on certain legendary creatures. I think, though, that this presents an excellent opportunity to get together with friends and fellow brewers and brainstorm some awesome new ideas. I would have never been this excited for Thantis without talking to the folks in my Discord server! They helped me see the fun of the big Jund Spider, so this has been a massive success in my book. Of course, if you (yes you, lovely reader, you!) want to help me with future articles (by providing the options for my Uncommonder Twitter polls, for instance) then you can click here to join my Discord server. Until then, get together with your friends and brew something awesome!

Tell me about it in the comments below and see you next time!

CREDITS: I wanted to give a special shout out to the people that helped from Discord! So, thank you to TitanOfTheDeep, empireScum, Athex Devoux, and GrayAlchemyst! You were all a huge help and without you I would not have written this article nearly as well or with as much excitement! Thank you for helping me spin this web!