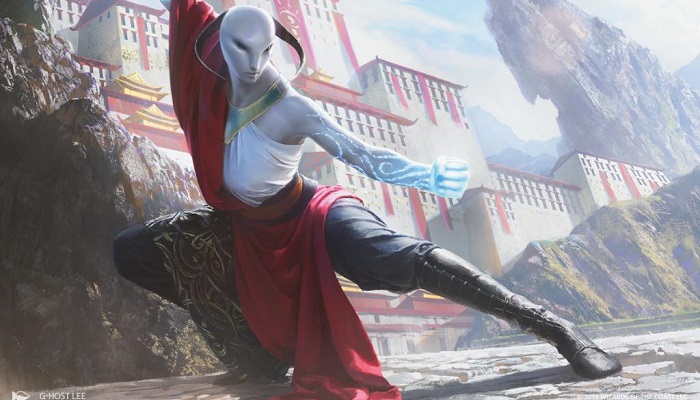 (Elsha of the Infinite | Art by G-host Lee)

Hello again, Commander faithful! Welcome back to Replacement Commanders, the series that shines the spotlight on the legendary creatures of the annual Commander precon product that didn’t make it on front of the deck! This week, we're talking about...

Elsha of the Infinite

Each year, the face commanders tend to steal the spotlight while the “replacements” get a bit less attention. This year, however, seems to have been a reverse situation, as a few of the replacements have garnered more hype than some of the face commanders. Atla Palani, Nest Tender, for instance, became much more popular than Ghired, Conclave Exile. The next 'big hype' commander that overtook the deck's face commander was, without a doubt, our mysterious lady Elsha. She provides a substantial amount of value even at the helm of the precon, and I know many people have enjoyed switching her into Sevinne, the Chronoclasm’s spot.

Why was everyone so hyped about Elsha, you may ask? Her ability to look and play cards from the top of the deck counts as a form card advantage. Giving noncreature and nonland cards the ability at instant speed via flash makes the deck more versatile. With the right amount of top-deck manipulation, this can translate into two or three extra cards in our hand. Finally, while it may not be the most exciting text on Elsha, Prowess does give us the ability to threaten extra damage during combat, and to close out games with commander damage. Thanks to her colors, Elsha has several ways to grant evasion, from trample and menace to flying and unblockability.

All of these features play into the potential build paths for Elsha, so let's begin our brewing!

Elsha grants any spells that are not creatures or lands the ability to be played at instant speed. I'm reminded of my build for Raff Capashen, which was based on flashing Vehicles into play to take opponents by surprise. Elsha seems primed to adopt a similar strategy, byt instead of Vehicles, we can flash in enchantments!

To be upfront, Enchantress decks without green can sometimes suffer slightly, as most of the important cards like Verduran Enchantress are unavailable. Luckily, blue should provide enough draw power to make up for it, with things like Rhystic Study, Coastal Piracy, or Bident of Thassa.

Instant-speed enchantments also act as unique forms of removal. Imprisoned in the Moon on an opponent’s commander, Detention Sphere taking out a key piece of someone’s combo, and even multi-removal effects like Grasp of Fate can turn the tide in the blink of an eye. I also like the idea of flashing in Karmic Justice when someone is targeting our favorite permanent type for a quick “gotcha!” moment. Flashing in enchantments also helps with a surprise Voltron win with cards like All That Glitters and Ethereal Armor to make Elsha huge and smash people out of the game.

It’s important to remember for all these decks that the cards only have flash when they are played off the top of our library. That means there are going to be a few repeat “core” cards like Scroll Rack and Sensei’s Divining Top to help us set up the top of our deck for instant surprises. For added synergy with an Enchantress-style deck, setting up the top of our library with an Enlightented Tutor and Idyllic Tutor prove to be very powerful indeed. Throw in the usual amount of ramp and other support cards, and we end up with a list that looks like this:

Flashing planeswalkers into play may not give you immediate value, since you cannot activate their abilities at instant speed, but it does provide you with a fun amount of potential trickiness and tempo. We aren’t just casting planeswalkers at instant speed, we're casting them from the top of our library. Since many blue planeswalkers allow us to look at or draw cards from the top of our library, this gives Elsha a bit of extra synergy to dig for new walkers. Not only that, but casting those walkers will trigger Elsha's Prowess to make her a more formidable blocker when she defends our wall of Superfriends.

Ironically, quite a few of the planeswalkers in Jeskai colors work decently with another classic archetype: Spellslinger. Both Teferi, Hero of Dominaria and Teferi, Time Raveler terrorized Standard for a time as strong control pieces, and both of them will help us control the game here, too. Ral, Storm Conduit duplicates our spells while Narset Transcendent provides a similar effect with Rebound. Narset, Parter of Veils is another hard piece of control, while also giving us a means to clear out the top of our library if Elsha is stuck with uncastable lands on top. Jace, Wielder of Mysteries presents a wincon if we dig too deep into our deck, as do most of the Planeswalkers if we can get them into range of their ultimate abilities.

Naturally, we will want some Proliferate cards to up our planeswalkers' loyalties, so Contagion Engine and Contagion Clasp are right at home, along with Flux Channeler, Karn’s Bastion, Inexorable Tide and Viral Drake. Oddly enough, I like the idea of Sword of Truth and Justice to give Elsha some protection and evasion, while also working with Proliferate and making her stronger as well! With some ramp, removal, and Wraths to help keep the board clear for our wall of walkers, the list looks something like this:

Fellow EDHREC writer Angelo Guerrera and I are always at odds when it comes to our preferences in Magic, specifically in our favored color combinations. Most long-time readers of mine will know that I love value, the graveyard, and the Golgari colors. Angelo enjoys the flyers, tokens, and the many spells of Jeskai. We never stop going back and forth on which color combination is better, so when one of the decks of Commander 2019 was announced to be Jeskai, I teased him that I would find a way to Golgari-fy one of his precious new commanders.

Enter Elsha of the Infect.

Surprisingly, Jeskai has a decent amount of support for Infect. They have access to quite a few creatures with the mechanic, a good number of which are artifact creatures, and both white and red are very good supportive colors for artifact decks, including recursion techniques. At the end of the day, though, I don’t want to win games by having Blightsteel Colossus do all the heavy lifting. We want Elsha to be in the spotlight, and the two best ways to do that with Infect are Grafted Exoskeleton and Corrupted Conscience. Exoskeleton is great, but it requires a bit of setup for a proper surprise win, since we need to be able to attach the Equipment to Elsha. We can run things like Sigarda’s Aid and Hammer of Nazahn, but Conscience feels more surprising, especially if we can trigger Prowess enough for Elsha to deal 10 damage.

The best part about this deck is that we can mask it as a regular Voltron deck. Even if we never get Infect onto Elsha, they'll still be superb synergy. True Conviction will help Elsha hit twice as hard, as will Blood Mist. We can lean toward a few unique Wrath effects too; Single Combat, for example, works well with this strategy since we'll tend to have much fewer creatures in play than our enemies. Chandra’s Ignition is another cute one-two punch for the deck, and we can pack more specific recursion for it and for Corrupted Conscience to make sure the deck is more resilient to removal.

Adding things together should give us something that looks like this:

Flashing at End of Turn

It's easy to see why Elsha is one of the few replacements who people enjoy more than the face commander of the precons. She's versatile and powerful, so much so that it was hard to narrow this particular article to just three potential build paths for her. This is easily one of the few Jeskai commanders I think I would enjoy running as a deck of my own. (That’s right, Angelo, I said it!)

Until next time, feel free to follow me on Twitter or come and chat with me on the public Praetor Magic Discord if you want to get more of my crazy ideas! You can also see some of my builds on our YouTube channel and when we stream on Twitch! Hope to see you out there in the wild!