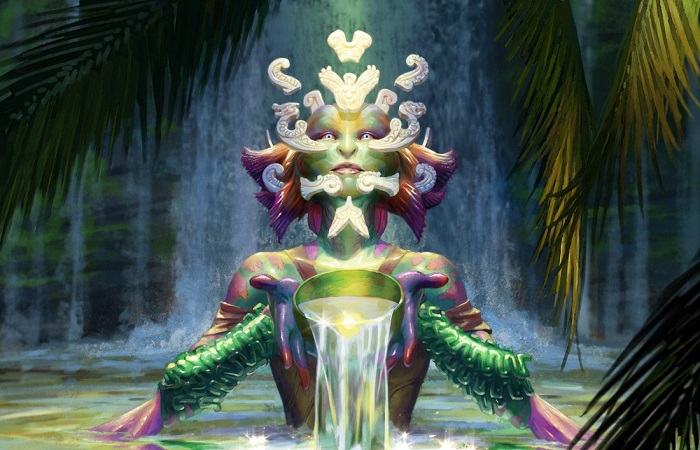 We are back (back again!) my lovely readers, and I need to ask you to sit down, lean back, and get ready for another installment of Replacement Commanders! This series shines a spotlight on the legendary creatures from the annual Commander precon decks that aren't the face card on the packaging, but can absolutely fit into the command zone. I started this series last year during Commander 2017, the year we saw four different decks based around tribal synergies. While Edgar Markov, The Ur-Dragon, Arahbo, Roar of the World, and Inalla, Archmage Ritualist were the main representatives of the Vampire, Dragon, Cat and Wizard decks, respectively, each deck had two other new legendary creatures that did not need tribal strategies to be powerful. This year's product themes were Jund “lands matter,” Izzet artifacts, Esper "top of your deck matters,” and the deck that gave us today's Replacement Commander, Bant enchantments. Since each Commander 2018 deck was meant to be piloted by the new planeswalkers-as-commanders, the other legendary creatures in these decks each want to do things a little differently. For instance, let us look at today's Replacement Commander: For those of you who do not know, my wife and I are both Commander players. We regularly joke that my wife built her Elf deck (led by Ezuri, Renegade Leader) to handle how quickly my Krenko, Mob Boss combo deck could go off. Over the years, my wife has shown herself to have an affinity for green and white decks, with sometimes a splash of blue. After seeing Melissa DeTora's Karametra, God of Harvests enchantress deck, I suggested that my wife try something similar because I think she would enjoy piloting a similar deck. She runs a Heliod, God of the Sun enchantments deck, but no access to green really cuts down on the amount of card advantage the deck can accrue. Still, my wife was interested, and we bought all the existing “Enchantress” effects at an event this year.

Then Wizards of the Coast announced they were going to be giving us Bant enchantments in this year's Commander product, and we collectively lost our crap over how cool the timing was. I paid very close attention during the preview day for the Bant deck and was excited to see all three of the legendary creatures for the deck. Tuvasa stuck out to me most of all, though, for several reasons. First, she is relatively cheap, only needing three mana for the initial casting. Some may scoff at her because she is just a 1/1, but in the right deck, she could come down right away as a 2/2 or even a 3/3, which is a great cost-to-power ratio. Plus, she grows stronger with each enchantment on our field, not just each Aura, so we can play tons of global effects and gain a stronger commander at the same time. Second, having an enchantress effect on our commander is very powerful! Sure, the effect only works once per turn, but there is some wiggle room in the fact that the card says, “each turn” and not just “your turn.”

Finally, I have noticed something about this year's product. While tribal strategies are not very well supported, I cannot help but that the legendary creatures are appearing with creature types that have seen some recent tribal boosts, but with add an extra color. During the last article, I mentioned how Spider tribal previously only had Ishkanah, Grafwidow in Golgari colors but Thantis, the Warweaver gave us a new option in Jund. From the Ixalan block, we got both Tishana, Voice of Thunder and Kumena, Tyrant of Orazca as Simic (blue and green) Merfolk commanders and in the past, we have seen people have success with Sygg, River Guide, Vorel of the Hull Clade and many other fishy folk. We have always seen two-colored Merfolk legendary creatures, sometimes making it hard to put combinations of these together into the same deck. With Tuvasa, we see the possibility of a Bant Merfolk tribal deck!

The Sunlit School of Fishy Folk

Tribal Merfolk is an interesting idea for Tuvasa. Outside of her own creature type and colors, she does not particularly synergize with most other Merfolk at first glance. However, if we stop and think about it, one of the more popular strategies with Merfolk is to buff them up with lords like Lord of Atlantis, give them evasion in the form of Islandwalk, and then find a way to turn one of our opponent's lands into an Island (like with Lingering Mirage) so we basically have an unblockable army. I think we can utilize a similar strategy with Tuvasa and any kind of evasion, whether it be Islandwalk, flying, unblockable, or trample to beat our opponents with a huge fish!

Starting with lord effects, we already mentioned Lord of Atlantis, but there are many more! Merfolk Mistbinder, Deeproot Elite, Merfolk Sovereign, Master of the Pearl Trident, Merrow Reejerey, and even Coralhelm Commander are just a few. Kumena, Tyrant of Orazca has a place in the deck to buff our army. Since Tuvasa wants us to play enchantments and we are including cards that deal with +1/+1 counters, Cathars' Crusade and Hardened Scales will help us accelerate how big our fish get all at once. I think protecting our army with cards like Asceticism is a good idea, while getting rid of pesky enemy artifacts and enchantments with Aura Shards can shift the game in our favor. There are a couple of enchantments that will help our army by making tokens, like Aquatic Incursion and Deeproot Waters. While we are mentioning tokens, Summon the School should be an easily recurrable spell to keep pumping out even more tokens over time. Overall, I think Tuvasa's School will look something like this:

Swimming in the Jail House?

I mentioned earlier that my wife was interested in the green and white Enchantress concept before we knew there was going to be a Bant enchantments deck. Something else my wife has always enjoyed are Pillowfort decks, to stay safe, or even to blatantly dip into the realms of Stax decks. One of her first Commander decks was built around Lavinia of the Tenth, and as an aggressive player, I hated it. She has slowly evolved to running cards like Grand Arbiter Augustin IV, Aura of Silence and I fear the day she decides to use Winter Orb or Static Orb in any of her decks. While we may not be talking about artifacts for Tuvasa, this does bring up the idea of running a prison-based enchantment deck that eventually make it nearly impossible for our opponents to do anything, essentially locking them down.

I admit that I have built similar decks in Rakdos colors, where the 'lockdown' came in the form of punishment, damaging players for everything they do, whether playing a land, tapping that land, untapping, playing creatures, discarding cards, drawing cards, or even just ending their turn. Prison decks are different in that they do not try to punish these parts of the game; they prevent them from happening entirely. Grand Arbiter Augustin IV and Aura of Silence were great examples of this, but there are even more hardcore locks with cards like Stasis, Stony Silence, Rising Waters and even Rule of Law. Of course, we need to keep ourselves safe, as our opponents will want to take us out of the game quickly, so Ghostly Prison, Propaganda, Norn's Annex, and my least favorite of all (which, naturally, my wife loves), [card]Sphere of Safety[card]. These all make it far too costly to try to turn cardboard sideways in our direction. If you like making the table miserable, I think you will love this list:

The more I write about secret win conditions (or “wincons”) in decks, the more I love the concept. My first attempt with the concept was when I brewed a four-color Elemental deck with Kynaios and Tiro of Meletis as the commander. The idea was to tutor out and take advantage of Omnath, Locus of Rage with K&T's extra land drops, flooding the field with tokens and then sacrificing them to make Lightning Bolts for all! Since then, I have found a way to work in a few of these strategies into my articles every so often, and I think Tuvasa can work this way, albeit in a different manner. Most hidden commander decks work around getting a legendary creature out and doing crazy things, like Omnath in K&T. But what if the hidden secret key part was really a spell? Let us say… the only spell? In a deck of entirely permanents? You may have already guessed it, but I am talking about Primal Surge!

I brewed a deck based around Primal Surge once before, for a Praetor Magic video with my team. My friend John is notorious for enjoying combos and spellslinging and deeming most creatures as “useless” and combat as "the least fun way to win," so when we had a theme to brew decks for one another, I naturally gave John a deck of lands, creatures, and a single spell. Minor spoiler: he nearly won that game on turn four! Still, with this deck, we want to dominantly include enchantments to take full advantage of Tuvasa's two abilities. We need defensive cards like Greater Auramancy, the Propaganda, effects and every Enchantress's Presence effect we can shake a stick at. There are some value creatures we can include, like Grand Abolisher or Teferi, Mage of Zhalfir, so no one messes with us when we cast Primal Surge. I like the idea of having Laboratory Maniac as a backup in case we cannot end the game when we cast our only spell, as well as Archaeomancer and Eternal Witness in the event we do go for the end game without those protection pieces. There are not many effects in Bant colors that would allow us to immediately attack to end the game, so Concordant Crossroads with Starfield of Nyx seem like our best options to hit people if we cannot simply make Tuvasa huge and smack the table for that sweet blackjack (that is, 21 commander damage). Overall, here is what I think the “permanents only” deck would look like:

Commander has so many different archetypes, it is easy to find comfort in a few and only build in those. If you look back through my articles, you may notice that I like combo decks, tribal synergy, and political gameplay. Stax and Enchantress are two strategies that I have never played, so these decks were an amazing opportunity and a great challenge. It makes you think about cards that you may not understand (or even like) at first glance and investigate interactions that you did not even know existed before. I started off in Commander as a token and mill player, turned into an aggro player, and have since evolved into a more controlling, grindy player with decks like Muldrotha, the Gravetide and my Jodah, Archmage Eternal Superfriends. The more interesting legendary creatures that Wizards of the Coast releases in future sets, the more players will evolve and change, if they are open to trying things. In the end, my challenge to you, dear readers, is to look at an archetype you may have never played before, find a legendary creature in the right colors, and try building something you have never built before! If you want to shoot ideas back and forth, feel free to join me on the Praetor Magic Discord or follow me on Twitter!

Until next time, keep having fun and keep brewing!