Replacement Commanders —When the Hammer Comes Down 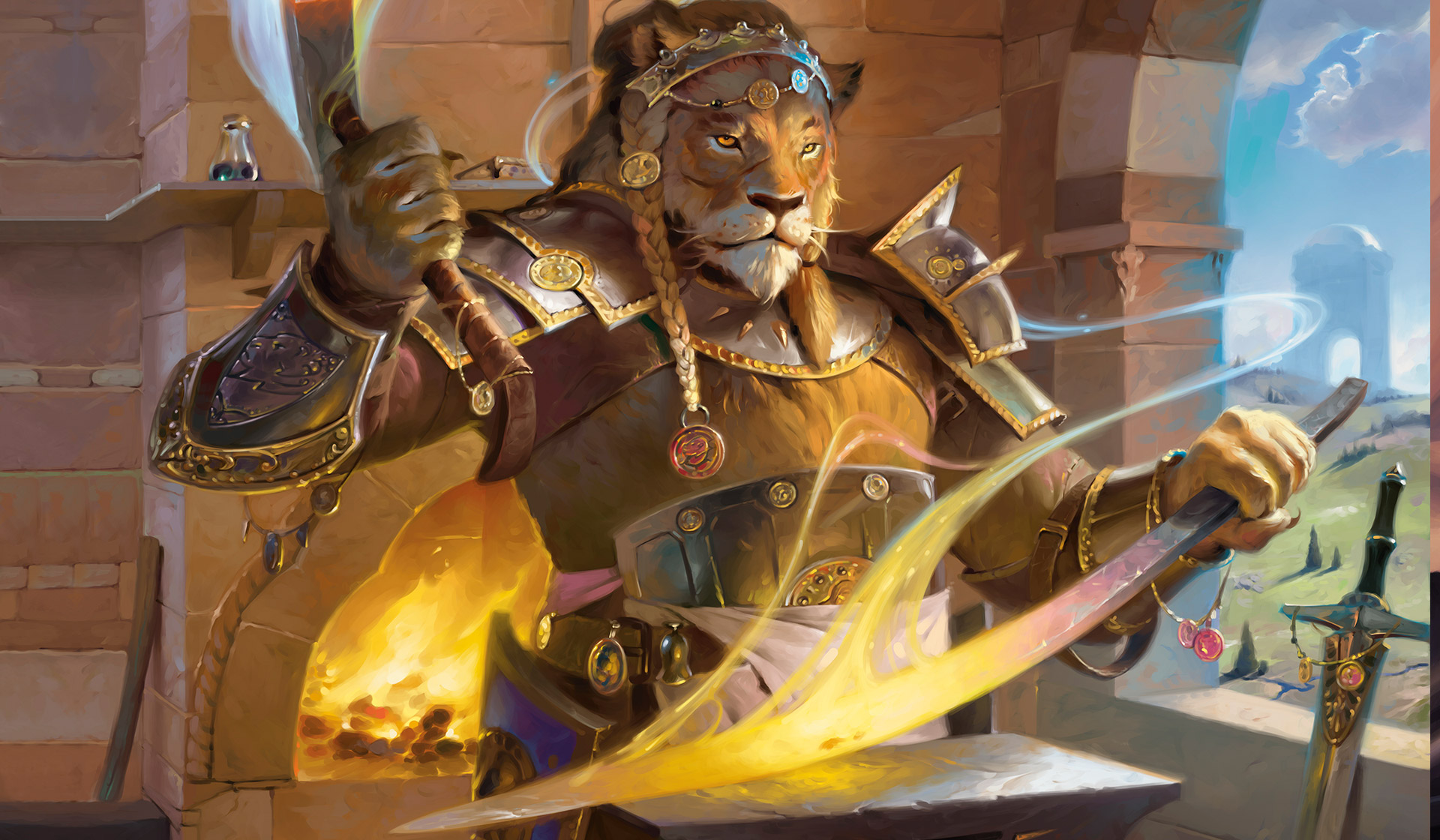 Well, readers, here we are. It feels like we just started on this journey together and we find ourselves at its end. This is the eighth installment of Replacement commanders, a series where we take a focused look at each of the eight new alternative commanders for the commander 2017 product, compile a “precon”-like list for these new commander and then look at some fun ways to build them that maybe our kitchen table friends will not see coming. We have covered tribal spirits from the Dragon precon, enchantments.dek from the Vampire precon, and even Wizards that do more wheelin’ then dealin’. It has been a fun ride and I am happy that I get the chance to do this one more time. Let us not waste any time and take a quick look at the replacement commander we are talking about today! … What? You mean… The Hammer is NOT the commander? How do you figure? It gives the equipped creatures indestructible, it allows you to equip for free, it is even Legendary, for crying out loud! Huh? Nazahn is the commander?! Let us get real here, Nazahn is just there to tutor out the Hammer! That is the real bread winner in this here build, amirite? Okay, okay, all jokes aside, we are looking at Nazahn, Revered Bladesmith today and I have to say, this legendary creature became one of my favorites when I did my 1-versus-1 precon testing with my wife. Having a tutor in the command zone is a threat that your opponents should notice from turn zero, especially given some of the finer details of Nazahn. This little kitty is very well designed in color identity and even subtypes. Being a legendary cat creature encourages us to have a tribal sub-theme to the deck and that works well, considering that cats in Magic tend to like shiny toys like equipments. I love the fact that Wizards of the Coast decided to make him an actual Artificer instead of lumping him in as a Soldier or anything silly like that, as it feels like a flavor win to see a smith named a smith. On top of that, you have a large suite of removal in white and just as much of a large suite of ramp with green. The fact that Nazahn can tutor (see: smith) any equipment out of our deck and not just the Hammer is also a nice touch. Sure, the Hammer is his masterpiece, but if we want to get tricky with any kind of flicker effects, which is also prominent in white, we can keep pulling out whatever item we need at the time. People tend to forget about his last ability, which allows us to tap down creatures when our own equipped creatures attack, paving the way to get our damage in and prevents bad blocks or even just pesky chump blocks. Finally, I think his stats are a bit on the underwhelming side since he costs six mana but only comes in as a 5/4. But this fact is offset when we tutor out the Hammer and attach it to him, making him a six mana 7/4 that is also indestructible! A very well made, well-rounded equipment commander, indeed! Now, if we look at EDHREC.com to make our “precon” list, the list below might be what it looks like.

NOTE: Normally I put these kinds of notes AFTER the decklist, but I wanted to almost use this one as a disclaimer. There were some great choices in the EDHREC.com data that I chose to ignore for one reason or another. Vanquisher's Banner is a great new card from Ixalan because there is a strong chance we will be casting many cats. I chose to omit it from the list, however, since I did not want to focus as much on tribal strategies, since there are great equipment-matters creatures that are not cats (like Sun Titan or Stoneforge Mystic, for example). However, I did choose to include some type-matters cards like Cavern of Souls and that was because I predict people will want to counter our commander and keep us from getting our tutor ability to trigger when he enters the battlefield, while also making it more expensive to cast him to try again and giving them time to draw into another counter or some other way to stall us further. In the end, there was a method to my seemingly methodless madness, so I hope you lovely readers will take my choices with a grain of salt.

Looking at the list, it very much gives us the feel of a true precon. There are multiple strategies we can look at and improve upon if we choose to focus on them. There is Cat tribal, equipment-matters, token strategies.. You name it and we can see hints of it in the list. Of course, this series is never about simply improving on what other people are already doing, but sometimes bringing a predictable commander to the table and doing something unpredictable. So what will the table not see coming?

This isn't even my final form! Or real commander...

In one of the past articles, I spoke about the concept of having a “hidden commander”. Basically, this idea is that while you have one legendary creature sitting in the command zone, they are only there to enable your real win condition. I think Nazahn does this well because we do not have to focus on using him to deal the damage to get a win. For instance, when my wife and I played our 1-versus-1 testing and she played the Cat precon, one creature basically won one of the games for her. That creature was Balan, Wandering Knight. I like the idea of spreading some threats around and making our opponents focus on the little things and then surprising them with playing Balan and suiting him up to swing in for the win. A good way to spread threats around would be adding in things like Nahiri, the Lithomancer to put down some tokens and spread the equipment around. This may give our opponents the idea that we are trying to go wide instead of a single strike and they will be more concerned with getting rid of the tokens or token makers instead of the equipments. Some other cards to enforce this kind of strategy might be Brimaz, King of Oreskos and Jedit Ojanen of Efrava and Pride Sovereign to not only make tokens, but make Cat tokens. Of course, we do not want to saturate the list too much with token makers that we cannot still pull of our alpha-strike with Balan, so make sure we keep our equipment and maybe throw in some more like Sword of Vengeance, Argentum Armor and Batterskull.

In Magic, each of the colors has its own unique focus; however, each color does more than just one thing. Green is notorious for big, stompy creatures and the ramp to play them, but they also have some recursion and life gain capabilities. As we stated before, white has a wide array of removal, but it is also very good at making tokens, going wide and then piling counters on top of those tokens to make a huge army of small creatures into a huge army of huge creatures. One of the fun things you can do with a strategy like this is gain large amounts of life over time with these tokens and winning the game out of nowhere. Cards like Essence Warden, Soul Warden and Soul's Attendant will very quickly have your life total double what you started with. Token makers like we talked about, along with White Sun's Zenith and ways to make more tokens like Doubling Season, Parallel Lives and Anointed Procession accelerate the lifegain, especially if we have cards like Anointer Priest, Healer of the Pride, and even Trostani, Selesnya's Voice as well. Of course, just gaining life does not win us the game, so we should pack closers like Aetherflux Reservoir and Felidar Sovereign. Approach of the Second Sun would not be amiss in the deck list, but I would also suggest adding more draw power so that we can cast it once and get it back into our hands for that second casting quickly. Nothing turns attention our way at the table like telegraphing that we have an “I win” condition in seven draws, after all!

I think part of being an avid Magic: the Gathering player is realizing that there will be times where Wizards of the Coast prints cards that make little to no sense to you. In past sets, I have looked at legendary creatures that are revealed and scoffed with the thought of “Well, obviously they were not thinking about commander when they designed THIS one!” Of course, I do not expect them to be making every legendary creature with commander in mind, but it is always a thrill when they give us a great, well-packaged card like they did with Nazahn. Cats, equipments, tokens, other kinds of “artifact matters” strategies are all possible and we can find silly, crazy and fun ways to work with these strategies to really make a deck our own. At first glance, I thought Nazahn, while well designed, was going to be very linear. Ramp to Nazahn, cast Nazahn, go find Hammer, hit opponents in face with said hammer. I predicted we were going to be a legitimate Magic version of Thor; more brawns than brains. It was refreshing to take a step back and find other ways to use and abuse colors, types and abilities while also keeping some kind of synergy with the commander. After all, the format is named after this special card in its own special zone, right?

And Now, the Time is Near Wow. That was it, readers! Eight great legendary creatures that I got to explore and try to twist and tweak with all of you. Like I said, this has been a great and fun experience and I hope at least some of you, if not all of you, enjoyed some of the fun, janky ideas we concocted together. Some of you may wonder “what’s next after this series?” and the reality is that the current answer is... Well, nothing. I am going to be taking a little break from articles since I have recently re-enrolled into an online college in the quest for that ever-elusive Bachelor’s degree and I need all the time I can manage. Hopefully I will get to a point where my time is a bit more manageable and I can think of a new series to bring to you all. Until that time, though, I still plan to be active on Twitter, so if you want to find me there, my handle is @DM_Cross and I talk about commander and Magic: the Gathering in general pretty much constantly.

I think I have stalled long enough. Truly, from the bottom of my heart, thank you for all the feedback and input you have given me over the past few months. I have truly enjoyed this experience with you and I cannot wait to return and do it all over again! In the meantime, be kind to one another and have fun turning cardboard sideways! Peace!