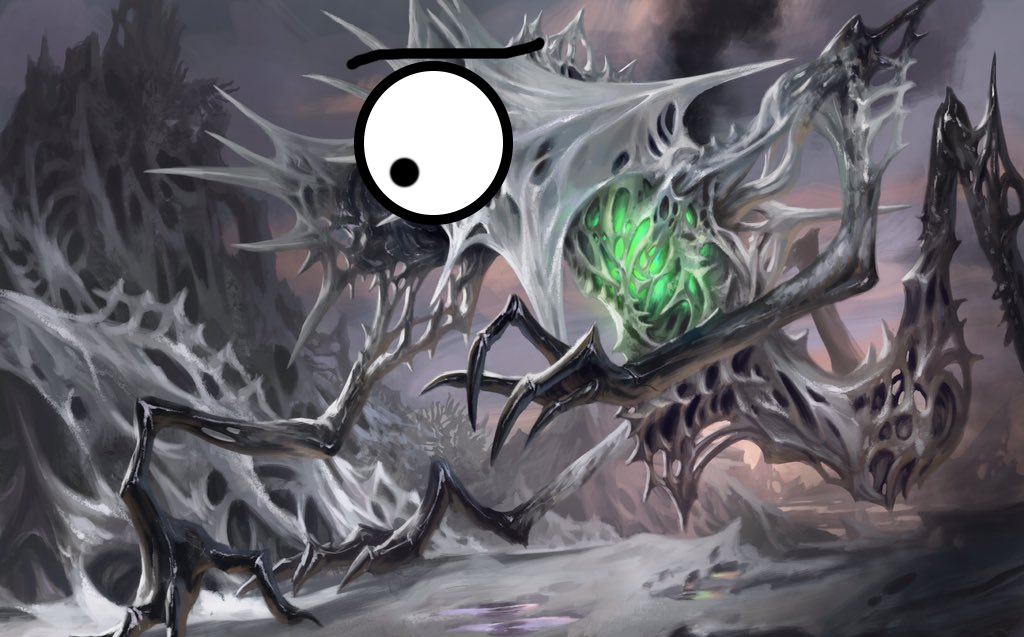 Greetings, fellow EDH addicts. Welcome to another iteration of Shape Anew, where we will create a decklist around super popular commanders, but must use at least 40 cards not featured on their EDHREC main page! Different strategies are explored to find original strategies for these popular commanders. This month, it’s time for none other than:

Confession time! I don’t particularly like tribal decks. Most of that comes down to them being very linear to build, with a lot of must-includes and obvious synergies. I don't generally like to play creatures simply because they have the correct creature type. That being said, I do believe tribal decks can be very interesting to build if you decide to approach them from a different angle.

Yarok, the Desecrated provides such an opportunity. It's a very open-ended commander, especially when looking at it through a tribal lens. One obvious tribe with tons of enter-the-battlefield triggers that Yarok could abuse are the Elementals, well-known for their Evoke mechanic, as seen on cards like Mulldrifter. However, Elementals are not the most enter-the-battlefield-y of creatures. Who are?

Ironically, Allies are the example of linear tribes. Along with Slivers, I think an Ally deck would fall in the top three of Commander decks with predictable decklists. This is due in large part to the commander that is often chosen for Ally builds, General Tazri, who enables a kind of ‘Allies goodstuff’ deck, often leaving little room for extra flair. However, their Ally-ness isn’t the only thing that sets this tribe apart from the rest - they're very keen on repeating enter-the-battlefield triggers, as well.

The heart of the deck consists of the little creatures that bring us so much joy. Our focus is on the Allies with enter-the-battlefield abilities that trigger off of each other. This really works wonders with Yarok, the Desecrated. Our commander obviously triggers a Turntimber Ranger entering our battlefield twice, but any additional Ally we play not only triggers that Ally twice, but also triggers Turntimber Ranger again. That's four triggers for the price of one!

Even though our Allies will trigger numerous times, this is a little more limited than may be thought at first. Effects of cards like Seascape Aerialist don’t stack. Once is enough. Thus, our most explosive turns will happen with a Hagra Diabolist, Halimar Excavator, or Tajuru Warcaller on the battlefield, as they stack quite beautifully. Luckily, Allies, unlike Goblins, can do more than just explode: Agadeem Occultist and Sea Gate Loremaster are two examples of cards that grind us to victory with enough Allies in play.

Furthermore, some Allies have been included for their quality, not their synergy. Drana, Liberator of Malakir is probably the best example of this, as she helps our creature-heavy deck pack a real punch within just a few turns. A Zulaport Cutthroat will also slowly (but surely) win us the game if our opponents don’t watch out.

We only play three colors, which means we don’t have access to all Allies like General Tazri. Instead, we’re going to take advantage of one of the major strengths of blue (and to a smaller degree, green) by copying our creatures. The main aim here is to copy them as easily and often as possible to get the most out of our triggers.

Jwari Shapeshifter, Shapesharer, and Identity Thief can clone our Allies at very low costs, making it easy to chain numerous Ally triggers into each other. These explosive turns can take any opponent by surprise. Rite of Replication just straight-up ends games, sometimes even just by copying an opponent's creature (hello there, Craterhoof Behemoth).

The best of the bunch are those Clones that can also copy Yarok: Spark Double or Sakashima the Impostor. This would triple or, with some luck, quadruple our Ally triggers. Spark Double could even enable further copies of Yarok, as any copy that takes the form of the Shapeshifter also circumvents the legend rule.

A third way to increase our number of Allies is the inclusion of Changelings, or other effects that alter the creature types of our minions. Graveshifter help us get back one important piece from the yard, or two with Yarok in play. Shapesharer is a very flexible ‘Ally’ which can copy important abilities on the fly.

Changeling Titan provides one of my favorite interactions here. Not only does it have an enter-the-battlefield ability while being an Ally itself, but it also re-triggers other abilities while possibly protecting the creatures it Champions. With our instant-speed copy spells, such as Cackling Counterpart, we’ll even be able to Champion the Changeling, returning the Championed creatures, re-triggering everything a crazy number of times (and keep in mind, you only have to trigger something like three times for it to be game-alteringly crazy). Amazing.

Allies trigger Allies trigger Allies. Their engine can even be strengthened with some additional tribal cards that have been sprinkled throughout Magic’s past. Some of these cards, like Kindred Discovery, even trigger their own enter-the-battlefield effects that can play along nicely with Yarok. Tribal support comes in many forms.

Steely Resolve protects our Allies very nicely from the nasty spells our opponents try to cast. Herald’s Horn decreases the costs of our Allies, and aids in finding them. Distant Melody or Vanquisher's Banner can draw us a whole bunch of cards. Every year there’s bound to be multiple generic tribal cards that help out a deck such as this, especially with all our Changelings running around.

As the game progresses, we will slowly fill our battlefield and graveyard with numerous Allies. We must not forget that creature-based strategies can be very fragile in Commander. Although Allies are capable of very explosive turns, it can never hurt to build some resilience into our deck. Thus, let’s blink and reanimate our creatures.

Both kinds of resilience serve double duty here. They both protect our creatures (blinking can fizzle a removal spell, and reanimating them makes that Terminate look foolish) and they re-trigger the Allies’ abilities. The best of these are mass recursion, the Living Deaths and Finale of Eternitys of the world. Repeatable effects, like Nephalia Smuggler, deserve a spot in this category as well.

Woodland Bellower might be one of my favorites here. With Yarok (or its predecessor, Panharmonicon) it searches for two creatures (read: Allies), who can both trigger off of each other for a grand total of eight enter-the-battlefield triggers! (Remember that Bellower's duplicated ability will fetch these creatures one at a time).

Removal is essential in Commander. Too many decks run too little of it, even though removal can often be used to strengthen a gameplan. In our case, we’ll mostly be looking for the removal spells that will aid our enter-the-battlefield synergies.

More important than other types of removal is creature destruction. This comes in many forms, from Kenrith's Transformation drawing us two cards while semi-permanently getting rid of a commander, to Kindred Dominance just straight-up killing all non-Allies on the battlefield. Where we can, mass removal will also be an enter-the-battlefield ability. Inner Demon, for example, becomes a Languish that also pumps one of our Allies. Our Changelings aren’t even affected by it!

We'll also want to remove some noncreature permanents. Reclamation Sage is a popular creature in this spot. For us, Qasali Slingers is very interesting as well, both because of our numerous Changelings that could trigger it, and because of our Clone effects immediately doubling the Cat’s effect (even without our commander on the battlefield). Spreading Seas draws us two cards while stopping an opponent’s most broken land. Mold Shambler is another underrated card that has a slight edge over Acidic Slime by being able to remove a planeswalker.

We want to win either by killing our opponents slowly with little bits of combat damage, or through an explosive turn where we suddenly maximize our damage output. For the latter cases, we need mana. A lot of it. Casting three or four cards during our turn can quickly drain us dry.

Luckily, we’re in the colors of rapid mana acceleration and fixing. Cards like Cultivate or Kodama’s Reach would be obvious inclusions for probably every green deck, but let’s extend our tools by trying to primarily add ramp cards that interact with our enter-the-battlefield and/or tribal components. Wood Elves is best friends with Yarok (and is one of its most played cards), as well as Harabaz Druid (who is obviously far less popular in Yarok lists).

I truly enjoyed the possibilities that were offered by a combination of Changelings and Clone effects with any tribe. That, in combination with the synergies of allies and Yarok, the Desecrated, provided an array of possibilities I hadn’t expected. I would truly encourage everyone reading to tinker with weirder cards when building a tribal deck.

For example, these 51 nonland cards in the deck don’t appear on the EDHREC main page:

The deck plays like every commander deck should: explosive. It has been constructed in such a way that the ever-present boardwipes won’t cripple your game completely. Power-wise, it’s nothing too special and will win a satisfying amount of times in (semi)casual environments. I really enjoyed the different play pattern it provided to other tribal lists.

Oh, and don’t mind the abundance of basic lands. I like to just add the lands that have some sort of synergy with the deck, and leave the color-fixing lands to be dealer's choice. Everyone has their own preferences when it comes to the mana base, anyway, so basics are a clean field that folks can season to taste.

As I said, I truly adored the interaction of Changelings and Clone effects with standard tribal components. Interestingly, both red and white would provide numerous additional options for the ones who want to explore this path. Mirror Entity is the best creature in a lot of creature types, and can turn a non-tribal boardstate into a tribal one pretty quickly. Red provides a lot of one-shot Clone effects that can, much like an Ally deck, burst into an aggressive turn seemingly out of nowhere

“Incorporate red or white Changelings and Clone effects for a flexible tribal deck.”

Next month, we’ll start a rebellion! See you then!