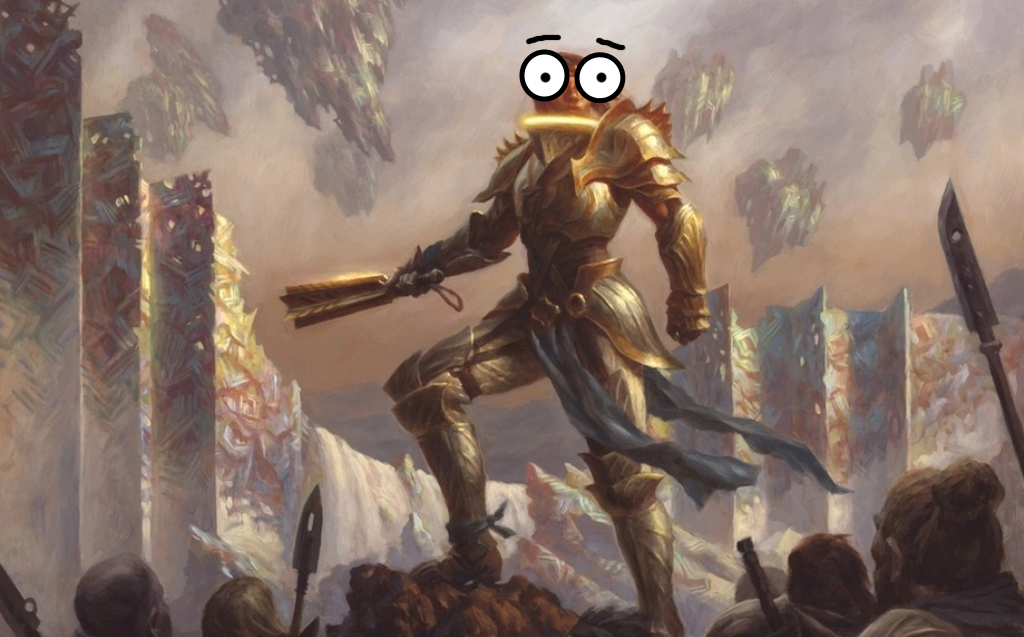 On Becoming a Target

Greetings, fellow EDH addicts. Welcome to another iteration of Shape Anew, where we will create a decklist around super popular commanders, but must use at least 40 cards not featured on their EDHREC main page! Different strategies are explored to find original avenues of play for these popular commanders. This month, it’s time for none other than:

I like copying things, and Zada, Hedron Grinder is one of the biggest providers in realm. Although she specifies only instants and sorceries, we still have plenty of opportunities. The real problem is the red color identity; it saddens me how restricting that was. Don’t get me wrong, I know plenty of awesome Zada decks; the variety between them just seems quite limited. That’s why today I want to push her into a more colorful direction. How?

General Tazri is how! With currently 787 decks on EDHREC, she's quite a popular five-color commander, although she used to be far more so. Although generally used for fetching all kinds of Allies, we can cast her to fetch Zada and also gain access to all the colors of Magic. On top of the Heroic-like copying interactions, I’d like to discuss specifying a strategy within an overall theme. Three possible routes for building this deck will be discussed, hopefully resulting in some slightly different takes on deck construction than normal. Let’s build the core from which these deck concepts will emerge:

The most important part of the deck are the spells that can target Zada. An important part of her ability is that she has to be the only target for the copying to happen. This means we’ll be focusing on single-target cantrips (spells that also draw us a card) so that we can draw a card for each time that each of those spells gets copied. A spell like Irresistible Prey draws us a card for each creature we control, and for only a single mana!

What do we want our targeting spells to do, besides draw us cards? The most important element of this deck tech is our ability to copy the spells. Therefore, we have to protect the pieces that enable this, like Zada. Protection through Shelter, regeneration through Dark Dabbling, indestructibility through Ephemeral Shields, or blink through Acrobatic Maneuver and Verdant Rebirth help up with this.

Besides protecting our pieces, we want to smash face. Our aim is to win through numbers, so that’s an essential part of our engine, as well. Repudiate and Tempt with Reflections virtually double our army, posing a serious threat to any opponent who dares to stand in our way. Fists of Flame is probably the best example of us pumping our team, giving +X/+0, where X is the size of our board, to each creature we have, while also drawing us X cards and giving trample to see the damage through. Did I mention that this is for a meager two mana?

There’s two enchantments supporting our cantrip plan: Jeskai Ascendancy and Season of Growth. The Ascendancy not only helps us filter through our deck (which is necessary, as it’ll be essential to keep our value train running), but it also pumps our team. It might be one of the most over-performing cards in a deck full of cards that over-perform. Season of Growth is a little more subtle, as it’ll only draw us one card per targeting spell cast. However, when a flood of creatures enters our battlefield, no Crystal Ball will scry as much as we will.

Zada, Hedron Grinder isn’t the only Ally we’ll be utilizing. Thanks to Tazri, we have a whole toolbox to choose from. Harabaz Druid is one of the most efficient mana generators for a deck like this. Noyan Dar, Roil Shaper is a second kind of interaction with our instants and sorceries, which also creates more bodies for our Zada to target. Tuktuk Scrapper destroys stuff. Mirror Entity and Shapesharer are technically Allies themselves, and bring a whole lot of diversity to the table.

But besides actual Allies, we pack enough honorary Allies. These creatures support Zada and her shenanigans in several ways. Mirrorwing Dragon and Ink-Treader Nephilim function as duplicates of her copying ability, although both take a slightly different approach. Feather, the Redeemed is a new Boros favorite that supports us by neatly returning our cantrips to our hand to generate value all over again. Kess, Dissident Mage does something similar, although only once and only from our graveyard.

We have a framework for the Tazri-Zada partnership, around which we'll build three different strategies. This demonstrates how little overlap there has to be between decks, even when building it from the same core. The three strategies will be:

Right now, this list only contains 24 nonland cards that don’t appear on Tazri's EDHREC page. However, we'll be building decks themed in ways that very few Tazri decks are, and we have with 30 cards to work with, easily letting us reach the 40 non-EDHREC-page-card threshold.

With the Arcane Splice strategy, we’ll attempt to use Arcane spells and their Splice additions to add all kinds of effects to our (normally quite mundane) Arcane spells. As mentioned before, Zada needs to be the only target of the spell to trigger, so in order to Splice correctly, we need to cast a spell that does not target, then Splice upon it that do target. This Spliced target will trigger Zada and copy the entire Arcane spell for all of our creatures.

For example, let’s take Kodama’s Reach and Kodama’s Might. If we cast the former, then immediately Splice the latter, which targets Zada, onto the former, she'll consider both spells to be targeting her, thus copying a combination of Kodama’s Reach and Kodama’s Might per creature. We will be flooded with value, and our opponents will be flooded with awe, as long as our initial Arcane spell doesn't target anything and our Splicing spell targets Zada.

The targeting spells are often quite mundane because of this, but the initial Arcane spells can give us quite some value. Often, this will translate into drawing tons of cards, like with Peer Through Depths, Reach Through Mists, or Sift Through Sands. The aforementioned Kodama’s Reach ramps us lots, instead. Aura Barbs and Path of Anger’s Flame are examples that can help us go for the final blow.

This whole Arcane strategy is supported by a duo of Guildmages: Izzet Guildmage and Nivix Guildmage. If the right spells are Spliced on the right… spells, they can generate infinite value for us. One example is the combination of Ideas Unbound and Desperate Ritual. With Izzet Guildmage’s red activation ability, we can copy our Spliced spell and use the mana generated by that copy to copy the original again! How’s that for Arcane mastery?

Maybe the other popular way to generate energy counters would be better: enter-the-battlefield effects like Aether Chaser or Rogue Refiner. If we have several of these present, a single blink effect like Ephemerate retriggers all their abilities, generating us all that energy once again! This can be multiplied by Courage in Crisis (which also targets, and can thus be copied!) or a simple Winding Constrictor.

So what do we spend our energy on? Well, most creatures with ETB energy abilities have their own use for them, as well, but the more impressive effects can often be found on other creatures, like Lightning Runner or Demon of Dark Schemes. There’re even some artifacts joining the party, with either Dynavolt Tower or the now-infamous Aetherworks Marvel. If that doesn’t spark your interest, I don’t know what will.

The third strategy we’ll be discussing today makes use of all of the untap effects we can find: Refocus, Twitch, or Kari Zev’s Expertise, for example. However, these are not all: the aforementioned Jeskai Ascendancy also untaps our creatures, so we’re adding Intruder Alarm to the mix, as well.

Other additions made here are Heat Shimmer and Twinflame. They don’t technically untap our creatures, but they do create duplicates that can immediately tap themselves, which is just as good, really, especially when we'll be able to untap our entire team again at a later point in the turn, so we just doubled our tapping dudes!

Speaking of tapping dudes, Agadeem Occultist and Sea Gate Loremaster are two Allies that generate quite a lot of value when tapped, and Vastwood Animist even more so, as the lands that they animate are technically mana dorks, themselves, that will tap for mana and eat cantrips, themselves.

But we’re expanding our mana dork selection, as well. One-mana creatures like Elvish Mystic and Llanowar Elves are always welcome additions. At two mana, we have Priest of Titania, Gemhide Sliver, and Manaweft Sliver, who might not seems that special at first glance until you realize that Mirror Entity turns all of our creatures into both Slivers and Elves. That suddenly shoots our mana-production through the roof!

I really enjoyed writing this article. I hope the decks showcased how seemingly linear strategies can still have widely differing results, depending on their construction. But even considering the aforementioned three strategies, numerous possibilities still linger for the Tazri-Zada duo. Think of blink strategies with Otherworldly Journey, Enrage strategies with Rile, or an artifact theme with Confront the Unknown.

I'm very keen to see what you can come up with. If you have any results that you’d like to share, you can send it to me via twitter or reddit (@ellogeyen and /u/ellogeyen). I’m open to any comments and discussion regarding the content of the article, as well.

Next month, we’ll build a tribal deck that generally lands very well! See you then!