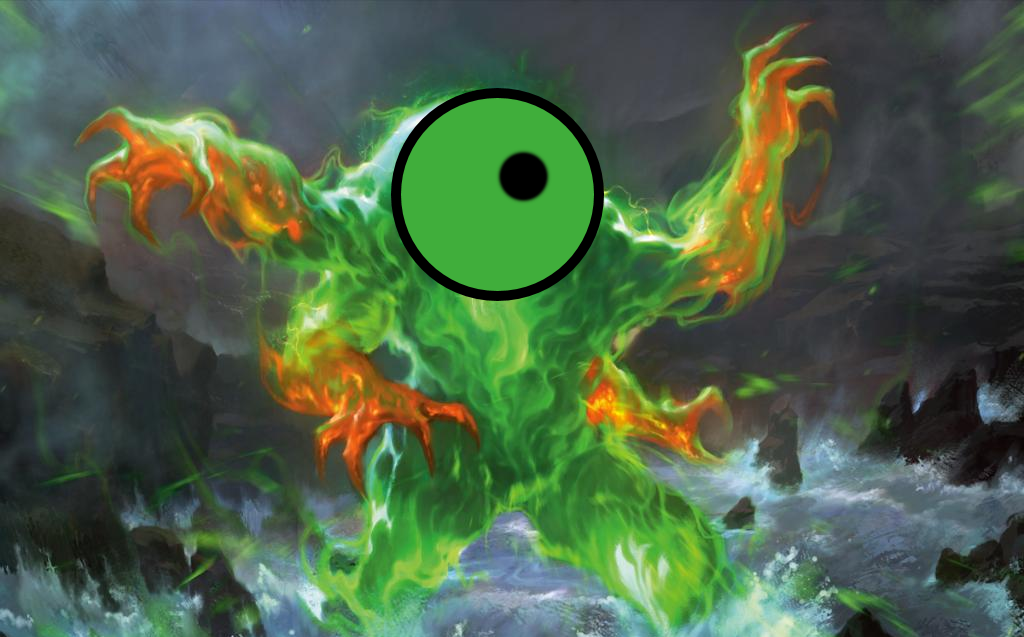 (Omnath, Locus of the Roil | Art by Lius Lasahido)

Not that kind of Mooning

Greetings, fellow EDH addicts. Welcome to another iteration of Shape Anew, where we will create a decklist around super popular commanders, but must use at least 40 cards not featured on their EDHREC main page! Different cards are examined to find original strategies for these popular commanders. This month, it’s time for none other than:

Omnath, Locus of the Moon

I'm a Simic boy. Probably always have been. Sometimes I’d like to nostalgically reminisce about my first dibble with the green and/or blue goodness. When I started playing, which was around the time of Worldwake, Landfall was a big thing for both of these colors. Playing, returning, and replaying lands to generate all kinds of value. Imagine my delight, then, when I found out about Magic’s Moonfolk. For those who don’t know, these creatures have flying and generally wield abilities like, “{X}, Return Y lands you control to their owner's hand: do something.” A prime example is Soratami Cloudskater.

Unfortunately, the only legendary creature that directly refers to Moonfolk is Patron of the Moon, and while the Patron works wonderfully with the tribe, we'd be locked into mono-blue, and when lands need to fall, we really do need green.

Fast forward to 2018 when Tatyova, Benthic Druid enters the scene, and my Simic dream came to fruition. I actually brewed and played the deck, and I had fun with it for a while, but man, was it annoying to play against. I might have focused too much on the land aspect of it all instead of something unique. The deck was taken apart, but the concept was still asleep at the back of my head.

So why am I so much more excited for Omnath, Locus of the Roil to helm this deck? I think it’s just because it’s not an obvious choice. Omnath screams Elementals, so adding Moonfolk to the mix spices things up. I think that many overlook the Tatyova-like ability when initially sitting down with our Locus-ful friend. Tatyova herself generally starts drawing cards from six lands onward, while Omnath starts at eight. However, Omnath gives us access to red. Delicious, fiery, red....

Until now, Moonfolk have only been printed in Kamigawa, except for Tamiyo. There they got a very distinctive mechanical identity, which sparked the interest of people like me. 14 Moonfolk creatures were printed, of which one is banned in commander (Erayo, Soratami Ascendant), and one is probably a little too underwhelming in commander (Soratami Mindsweeper).

On top of that, we have two Changelings! Shapesharer and Chameleon Colossus help us get the total Moonfolk count get back to 14. Both of them have an activated ability, just like the other Moonfolk. Training Grounds and Biomancer’s Familiar help us cheapen their effects tremendously, often reducing it to just a single mana. The ideal scenario is that we only have to pay the activation costs with the very lands that get returned to our hand, or even less.

And finally we have the Spirit itself: Patron of the Moon. It’s the only tribal card that Moonfolk have, so of course it'll be added to the deck. One very important thing to remember is that offering a Moonfolk to the Patron makes it enter with flash, which can set us up for impressive turns.

As you might have noticed, our Moonfolk all have flying, which I have found is not as common in Commander games as one might think. This presents us with some serious potential, as flying is a very supported keyword. Both red and blue help us in two major ways:

First, since flying is quite uncommon, we can easily connect with our Moonfolk, which means damage, perhaps even a lot of damage. Gravitational Shift is probably the most typical way to pump your flying flock. Red provides our creatures with extreme power buffs through Shared Animosity and Mercadia’s Downfall. One of my personal favorites is Crown of Doom, as it not only pumps our creatures, but it also incentivizes others to attack each other.

The second way to benefit from our density of flyers are global damage effects. Especially during the early days, red Wraths only dealt damage to creatures without flying. Today, we can use this to our advantage, as Subterranean Tremors or Magmaquake hit most of our opponents' creatures while missing most of ours (well, most of the time).

This section is dedicated to offsetting the disadvantages of returning lands to our hand. This is why we added green: Landfall. Specifically, we’re adding cards like Llanowar Scout or Exploration. Normally these kinds of effects lose value at later stages in the game, but not here. Since we’ll be returning more and more lands to our hand, the need for more land drops per turn grows stronger and stronger.

Six of our cards enable this by tapping, which means that untapping them would give us even more lands from our hand. In particular, Retreat to Coralhelm can give us an overwhelming number of land drops per turn. Kiora, Master of the Depths was added mostly because I like the variance of including a planeswalker, although she untaps and finds lands and creatures as well.

As we’re playing around with lands, there’re plenty of land interactions we’re still missing. Ramp helps us in our gameplan since our activated abilities are costly in both mana and lands. My personal favorite is probably Dreamscape Artist because it give us continual advantage and benefits from Training Grounds.

The other way to abuse our constantly falling lands is through... Landfall. Omnath already encourages us to keep lands coming, and will be joined by the likes of Tireless Tracker and the aforementioned Tatyova, Benthic Druid to give us a full grip of cards. However, my personal favorite interaction is Sasaya, Orochi Ascendant. Criminally undervalued, she fits right into our strategy. Since we’re returning lands to our hand through our Moonfolk, it’s easy to suddenly fulfill Sasaya’s flipping requirement of having seven lands in our hand. The amount of mana flooding out of our lands will be a mathematical nightmare, but, oh, so worth it.

With so much focus on lands, and especially returning them to our hand, it would be unfortunate if our Moonfolk end up missing in action. Only having 12 Moonfolk that return those lands to our hand is dangerously few. In order to mitigate this risk, we’ll be adding more cards that are capable of bouncing our lands.

Some cards were intentionally omitted, as I, myself, find them unfun to play (against). These are cards like Mana Breach or Overburden, which will just drag games out. Instead, we play Flooded Shoreline or Gush, providing very beneficial effects for our bouncing extravaganza. Multani, Yavimaya’s Avatar also meets these requirements, although from the graveyard, and also fulfills the role of big beatstick when the time comes.

Normally I don’t like to focus on the lands in a deck, but this one is an obvious exception. We especially love the Ravnica bouncelands, Izzet Boilerworks, Simic Growth Chamber, and Gruul Turf, which serve double duty as mana-fixers and land-returners. Ghost Town and Oboro, Palace in the Clouds even return themselves for an incredible Landfall count.

Because of our abuse of Omnath’s Landfall triggers, lands that double our land drop count are amazing as well. Fabled Passage or Prismatic Vista even do this at a minimum drawback, on top of fixing our mana. Field of the Dead then serves as an alternative wincon, pumping out Zombie after Zombie.

I’m not a fan of commanders who basically spell out what they’re all about, leaving little room for one's own imagination. A lot of tribal commanders are especially guilty of this. I was therefore surprised how one simple line of text (drawing cards when we have eight or more lands in play) transforms Omnath, Locus of the Roil into something else, since so many decks focus on the Elemental text instead.

For example, these 41 nonland cards in the deck don’t appear on the EDHREC main page:

I've seen very strong Omnath lists focusing on its Elemental identity. I’ve also seen how much those decks often seem to rely on some sort of tribal payoff. Remove those, and the deck is done for. Our approach today is far more stable, as an abundance of lands is a good idea regardless of (tribal) payoffs. You could say that this deck just shifts focus from Elementals to Moonfolk, but in my experience the latter are more resilient and more interesting.

If you know you can enjoy a Tatyova, Benthic Druid list, I would really encourage you to instead try to helm that deck with Omnath (and sprinkle in some red spells while you’re at it). I promise that it will surprise you, and playing the deck will feel fresh from a straight-up Tatyova variant.

I feel it has helped me immensely throughout the years to hold on to any crazy idea I've gotten for a Commander deck. Sooner or later a legendary creature will peek around the corner that fulfills all your needs and wishes. I know a lot of people were testing the waters with Ninja Commander decks even before Yuriko, the Tiger's Shadow or Modern Horizons came out. The same goes for this Moonfolk deck; Omnath was able to take the Moonfolk idea and really run with it.

There are still numerous tribes that don’t have an established tribal commander yet, and that’s for the better, in my opinion. Oozes, Werewolves, or Griffins are all examples of common creature types without a proper legend to lead the tribe. But that’s the challenge, and there lies the fun.

So, for those so inclined, here’s an interesting challenge:

“Construct a Commander deck around a tribe that does not already have a dedicated tribal commander.”

I am very keen to see what you can come up with. If you have any results that you’d like to share, you can send it to me via twitter or reddit (@ellogeyen and /u/ellogeyen). I’m open to any comments and discussion regarding the content of the article as well.

Next month, we’ll build something in the spirit of the Commander format! See you then!