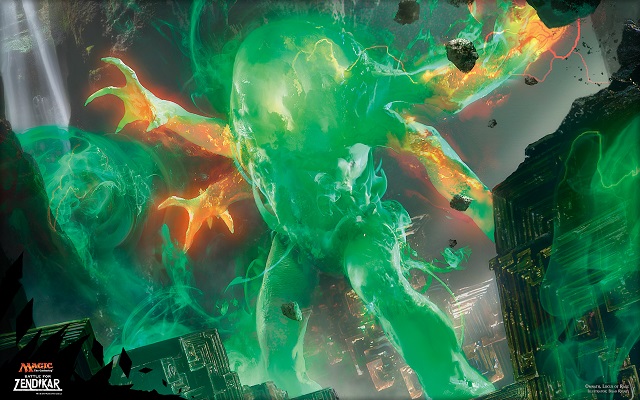 This article is part 3 of a 10 part series covering the Singleton Guild Wheel Project, a 10 deck project in which there is only a single copy of any non-basic land among the 10 decks. Each deck uses the color combination of a different Ravnican guild. The methodology is introduced here and expanded upon each week by featuring a deck formed using part of the Wheel. Since the deck building process is iterative, expect featured decks to change in between articles.

Well somehow they apparently haven't fired me yet, so that's pretty neat I guess! Thanks for continuing on this adventure around the Singleton Guild Wheel. Since last time I played 60-card Magic at Grand Prix (GP) Lousiville where I got to play into Day 2 at my first ever GP, which was a great, challenging, and immensely fun experience. Now that I'm back into the writing about Magic, let's cover one of the more explosive (albeit tantrum prone) decks in the Wheel: Omnath, Locus of Rage!

Omnath, known to many as "Angry Omnath," packs quite the punch. Since green is generally known as the best all-around color in EDH for ramp your mana base miles ahead of the rest of the table, I decided to pick a commander that rewards me for just playing a green deck. Explosive Vegetation just happens to put some 5/5 tokens in to play? Yea, sure. I like value, so sign me up.

Moving forward, I decided to focus these sections a bit more. They will mainly highlight cards that top the 50% mark for the respective commander in overall decks according to EDHREC. This helps the reader thirsting for advice to know whether I think a card is really that valuable, if it's merely a popular but replaceable effect, albeit at a less efficient cost, or if it doesn't make the cut for the sake of the Guild Wheel.

A quick glance a Omnath's EDHREC page, shows a relatively small number of people who play "staples," in an Omnath deck. Sure there are the stereotypical Kodama's Reach and Cultivate but those are some of the first to get cut here for use in other decks in the wheel. If we are going to ramp, we are going to ramp HARD! As my playgroup commonly says, we are going to "go hard in the paint". The deck craves putting lands onto the battlefield, so any ramp cards that put lands into the hand just don't cut it. If you take anything from this article, I hope it's that you have many more options to ramp your deck than the gold standard of Kodama's Reach and Cultivate.

Another card that is played at a very high clip is Zendikar's Roil. While I do personally like this card, but at five mana it always felt like I could be doing something bigger and better than getting incremental 2/2's for playing the game. I cut it because I want each deck to have its own distinct feel and not make the ten decks of the Guild Wheel into a tribal deck. While there are certainly a few cards that work well with the Elemental card type in the deck, it would be too easy to make UG Elves or UB Zombies etc, etc. The goal was to make different decks that played out like different decks beyond just the creature type and the inherent strategies there.

I like Tribal decks and all, but this ain't it.

An Omnath deck has access to oodles of mana. Truly, a literal metric ton of it. Also, since it plays cards that make tokens, we want to make use of them. Perilous Forays might be one of the most explosive cards in the deck. When we have Omnath on the battlefield, Perilous Forays becomes a one mana Lightning Bolt that replaces the creature we sacrificed to it. The card is incredible since it lets us block dudes, sacrifice the blocker to get another blocker for next turn and so on. When we combine this with Warstorm Surge or Where Ancients Tread we just get to start chaining our landfall triggers for out of this world damage. If we just happen to have Amulet of Vigor in play we essentially get to just win the game on the spot as well, which is always sweet.

Underplayed but Not Underappreciated

A few cards I've grown fond of over the course of building the Guild Wheel are the different types and styles of ramp cards. As I mentioned before, Kodama's Reach is great and all, but the nature of this project was to find cards that still get the job done, but maybe require a little more work. A few of these are Far Wanderings or Primal Growth; cards with potential UPSIDE if you're willing to do the work. Since it's never hard to achieve Threshold, Far Wanderings has never really been a downgrade to its more commonly played peers. These cards also have the upside that I personally enjoy of putting the lands straight onto the battlefield. While it is nice having a card in your hand to make sure you're hitting land drops I've found that this deck is so explosive with Amulet of Vigor that if we can essentially ramp for free there isn't any reason not to at least try.

Collective Voyage was a card that I only put in recently since it was a relatively pricey card compared to other ramp spells. Once it was reprinted in Commander 2017, however, I was more than happy to finally add it into some decks. I just happen to love letting other people do my work for me while I reap the benefits. Who doesn't? Nobody. The answer is nobody. I assume more people are going to get on this train moving forward because of the inclusion in Commander 2017, so grab one while you can. Play it. Enjoy it. Let other people pay for your Landfall triggers.

I also am incredibly jazzed up about a few new cards coming out in Aether Revolt for this deck. Rishkar's Expertise seems tailor made for a deck like this. For being an almost guaranteed "draw five+ cards," effect tacked on to a "play a free five-drop," it really seems like it is too good to be true. An undeniable shortcoming for this deck is that is does occasionally stall out on drawing cards, so being able to reload the hand and casting that Xenagos, God of Revels you just drew all in one swoop gives me warm feelings in my happy place. This might be my favorite new card from Aether Revolt when it comes to EDH. Casting free spells never is bad, and drawing lots of cards in green decks never hurts either so it's a win all around. Expect many green decks to start playing this card very soon. My shot has officially been called. 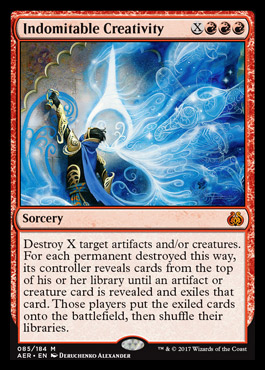 Indomitable Creativity jumped out at me right away and putting it in this very deck was my first thought. This enables so many insane plays that my head can't even begin to understand it! This card breaks up just about any ground stall by blowing up leftover artifacts like a Gruul Keyrune and an army of elemental tokens to get the Omnath triggers party started. THEN putting some haymakers into play makes your clock so fast it's ludicrous...

But seriously, red decks finally having a way to deal with creatures by actually destroying them is something I am very excited about. The downside is certainly there, but I think there is enough upside that it shouldn't matter. Indomitable Creativity will probably be a bulk mythic at some point, and I will gladly pick up a few.

Well there we have it. I hope you enjoyed this turn of the Guild Wheel and look forward to next weeks spin!