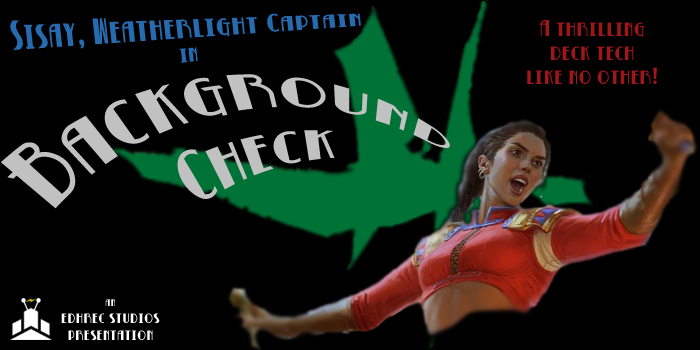 The Lady from Dominaria

It was just another night in Commander City. The rain fell gently, washing away the dirt and grime like an overloaded Cyclonic Rift. In a nearby alley, a down-on-their-luck player was flicking cards after keeping a bad hand, desperate to get just one more hit of land. Seemed like it would be a quiet evening... until trouble walked in.

"Welcome to Power Sink investigations. What can I do for you?" I inquired.

She walked up and put her hand on the desk, leaning into my personal space with the confidence only the captain of an interplanar warship could muster. "Word is you're pretty good at digging into the shady pasts of the most powerful and prominent commanders in the format, and that you've helped more than a few reinvent themselves when things got particularly ugly."

I leaned back and put my feet up on the desk just like mom told me not to. "You heard right. You must be Sisay... Captain of the Weatherlight. With 6,901 decks on EDHREC, you certainly have quite the reputation. You made a splash on the scene when you debuted in Modern Horizons 2. Being a mono-color commander with a five-color identity put you a cut above the rest, and your ability to tutor legendary permanents to the battlefield made you a popular toolbox commander, able to deal with a variety of situations. I hear you're also pretty good in a scrap, since your power and toughness goes up with different colored legends on the field. Things were good for you, and it looked like they were only going to get better; I mean, they're always giving us new legends after all. But it wasn't too long after that Sanctum of All came on the scene. One look at your average deck shows you got too deep into the Shrine game."

"I guess your reputation is well-deserved," she replied. "Yeah, I fell in with Shrines, and for a while it was good. Right up until Go-Shintai showed up. Now I'm looking to get away from it all, reinvent myself, you know? I hear you're the one to help me out."

"Yeah, I got just the thing." I reached for a dossier on a nearby table and tossed it onto the desk. A few cards spilled out, along with a flyer for Commander Legends: Battle for Baldur's Gate. "First, you gotta pick a Background."

Out of the Past

As much as I want to continue this noir detective story, it's going to be difficult to do a proper deck tech, and it's more of a Streets of New Capenna thing anyway. In plain terms, we're doing Background tribal. Backgrounds are a new enchantment subtype that was introduced with Commander Legends: Battle for Baldur's Gate, and because they're legendary, Sisay can find them.

Quite a few Backgrounds grant power or evasion, so this ended up also being a Voltron deck. With just Raised by Giants on the field, Sisay will be at 11 power, making her a two-hit clock to take out any player, and we can find Flaming Fist to get double strike and seal the deal. Tavern Brawler is in the deck for the impulse draw, but the additional power boost is helpful if unreliable. Agent of the Shadow Thieves and many other Backgrounds have an effect that triggers when we attack the opponent with the highest life total, so Breena, the Demagogue is a great way to give us extra cards while making our creatures massive.

Naturally, we need to make sure we can connect with our commander, or all these power boosts mean nothing. In this deck, Criminal Past isn't likely to add a lot of damage, but we're happy to get menace. If we're attacking the opponent with the highest life total, Sword Coast Sailor will make our commander unblockable, while Cultist of the Absolute provides evasion, damage, and a bit of punishment for anyone wanting to target our commander, but we need to make sure we have some extra creatures to sacrifice for that upkeep cost.

Speaking of extra creatures, we've also got a bit of token production from our Backgrounds. Veteran Soldier and Feywild Visitor can help us load up on small tokens, which are great for blocking or as a buffer against edict effects. Dragon Cultist can make legitimate threats if we can do enough damage. Backgrounds can even boost our other creatures. Master Chef puts a counter on each creature as it enters. Noble Heritage not only makes a creature big, but it can also protect us if our opponents take the deal. If we manage to make our commander huge, and we will, then Hardy Outlander can make another creature an existential threat that we can swing into another player.

In addition to their base effects, it's important to note that all Backgrounds are legendary enchantments, which means we can make use of a host of effects that synergize with these card types. Eidolon of Blossoms and Setessan Champion draw us cards when an enchantment hits the battlefield, which means extra card advantage if we tutor a Background with our commander. Of course, some of these enchantments will end up in our hand, so we also have Sythis, Harvest's Hand, which is conveniently also legendary. Ancestral Mask, Ethereal Armor, and Eutropia the Twice-Favored play well into our Voltron strategy, while Katilda, Dawnhart Martyr gives us another potential threat. Archon of Sun's Grace gives us flying blockers, and Skybind does work as a temporary removal effect, which, thanks to our commander's ability, we can trigger at instant speed. It can also be used to reset our own permanents, like lands we want to reuse to activate our commander. If we happen to lose any of our enchantments, we can find Hall of Heliod's Generosity or Norika Yamazaki, the Poet to get them back.

Speaking of recursion, this is where the "legendary matters" part of the deck starts to shine. As legendary spells, Backgrounds also count as historic, so there will be lots of opportunities to trigger Teshar, Ancestor's Apostle, and this deck has a lot of great targets for it. Restoration Specialist paired with Teshar creates a non-infinite loop where we can get back any artifact or legendary enchantment and get back the Specialist. We can also do the same thing with Eternal Witness if we have a sacrifice outlet, which is why we have Street Urchin in the deck.

While it's common for Voltron decks to be reliant on their commanders, this is especially true for this deck, as Backgrounds don't function at all without the commander in play. Because of this, we also want some protection effects. Saffi Eriksdotter and Bastion Protector protect Sisay from "destroy" effects, but we also want to protect against targeted effects. Cards like Darksteel Mutation and Imprisoned in the Moon are going to be backbreaking for this deck, so we have Shalai, Voice of Plenty and Esior, Wardwing Familiar for an additional layer of protection. Linvala, Shield of Sea Gate gives us the option to get hexproof or indestructible, and since she only has a mana value of three, Teshar can get her back after we sacrifice her.

That's all for the deck. Normally I'm not a fan of tutors in the command zone, and Sisay happens to be a commander that I personally dread facing, but this was a fun deck to put together. Backgrounds are an interesting mechanic, and I'm excited to see how they shake up the Commander landscape because I expect a few players to try this approach. Of course, with such a versatile ability, there are many other possible builds for Sisay. One of my friends has an interesting Equipment deck that uses her to grab all the legends that care about Equipment, and he often tries to make the Kaldra token from Helm of Kaldra and equip it with Kaldra Compleat. Unfortunately, he doesn't keep his decklists online, but Sisay does have an Equipment theme page if the idea appeals to you.

Thanks again for reading, and let me know in the comments what your favorite Background is!