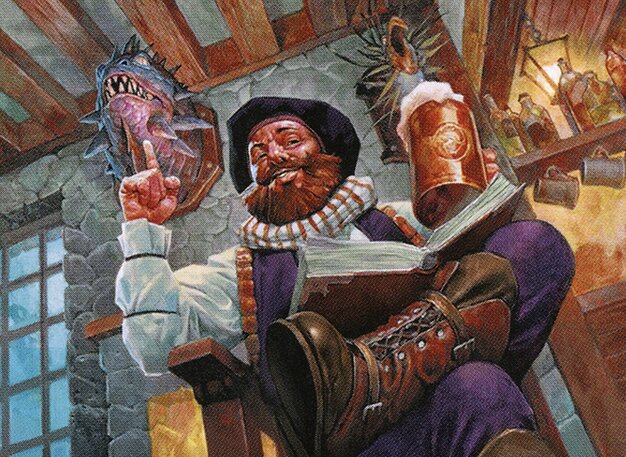 This week, we're talking about Volo! This deck will be built with Volo, Guide to Monsters in mind, but many of the same principles we'll discuss will apply to the new Volo, Itinerant Scholar as well.

For this article, I want to do some analysis of all the potential creatures in the Simic color identity to find the rarest creature types we can include in our deck. My theory is that the more viable creatures we can find in rarer creature types, the more room we have for the best creatures of the more popular types, without repeating any of their types! Please note: the statistics in this article only take into account all legal creature cards within the Simic color identity.

I also want to break down my logic behind finding splashier cards among the popular types, and finding the “essentials” (ramp, draw, removal) among the less popular types. Finding ramp from Sylvan Caryatid rather than Llanowar Elves allows us to fit the more exciting Elves options in our deck without having to waste our “Elf slot” on a one-mana ramp spell.

Both Volo cards synergize with a diverse suite of creatures. Remember, this article will focus on the Simic version, but the deck can easily swap out commanders for the newer Volo. All you have to do is add a green Background, such as Raised by Giants (or you can get even spicier and venture into another color and find the rarest creatures among that color identity)!

Let’s start by taking a look at the creatures that appear the most in this color identity. First and foremost, let’s take a look at our commander. It has both the Human and Wizard creature types. This means that any Wizards or Humans we add to our deck won’t be able to leverage the copy ability that our commander provides. There are 753 Humans and 502 Wizards just within the Simic color identity, so right off the bat, that eliminates over 1,200 cards we'd consider playing in this deck. Luckily, there are more than enough creatures out there with rare types that we won't mourn the loss of Humans and Wizards for long!

Remember, just because a creature type is popular does not mean that we should exclude it from our deck. These popular creature types encourage us to be careful in our selection process. We want to select the “best of the best” and avoid creatures with multiple types, such as Coiling Oracle.

There are a staggering 358 creatures with the Elf creature type, making it difficult to narrow down to just a single Elf for our deck. However, with so many to choose from, we can't really go wrong. Most Elves synergize with each other, but we want an Elf that will work well with creatures of any type. Elves have a variety of creatures that serve as added utility, such as Reclamation Sage, but my pick is Beast Whisperer, which will fill our hand with more beasts to play.

Speaking of which, 261 Beasts wander the planes of Magic: the Gathering. Rampaging Baloths creates a board state on its own and Migratory Greathorn can be used to ramp early game. Bonus: the Mutate mechanic works well with Clone effects such as Spark Double. Placing the Migratory Greathorn on top of our commander changes its name. This means we can make copies of it to multiply our commander's ability. However, one Beast stands above the rest, and that is Craterhoof Behemoth. Just one copy will almost certainly end a game, let alone the two copies our commander gives us!

Then we have Elementals. These vary in size, from Avenger of Zendikar, which will make an insurmountable army at a moment’s notice, all the way down to Mulldrifter, which is my pick for our Elemental slot. Mulldrifter is my all-time favorite creature. What it lacks in power, it makes up for in versatility. Importantly, our commander will double this creature’s trigger even when cast for its discounted Evoke cost!

There are 106 creatures with the Insect creature type. However, there is one Insect that I have seen completely take over a game, and that is Scute Swarm. Scute Swarm is hard to deal with just on its own, but with two copies right out the gate, we'll inevitably win the game unless an opponent finds a board wipe.

Then there are 84 creatures with the Illusion type. We won't double up on any creature type, but many illusions have Clone-like effects allowing us to get yet another copy of our favorite creatures. Technically all these copies could help us avoid Volo's type restriction, since they wouldn't count as Illusions on the battlefield, but I think it's important to commit to having no overlapping types. One particularly interesting creature of this creature type is Spark Double, which can copy any creature, even our commander, and that immediately piques my interest! Let's get even more copies!

Many more Horrors have been added to the game over the past few years, especially in the recent Dungeons & Dragons themed sets. Sludge Monster gives us an interesting form of removal that can shut down an opponent’s commander without giving them access to cast it again. However, the scariest Horror in Magic: the Gathering is the dreaded Mind Flayer. Just one of those Flayers will remove a problem creature while growing our ranks, but with a second copy, we can really take over the game.

Although many of these creature types are plentiful, there are a few that are much more rare. These are the best types to find for our deck, and if we can find our “Commander Vegetables” (like ramp and draw effects) among these less popular types, then we can pick the most exciting of the popular creatures, such as Craterhoof Behemoth, to end the game.

There are some hidden gems amongst the 46 Centaurs in the game. Selesnya Eulogist would be an interesting addition that could Populate our tokens, for instance. However, Courser of Kruphix will help us hit our land drops and generate card advantage, and that makes it my choice for this deck.

48 creatures have the Plant type, and often they are a good place to turn to help fill the necessary ramp and card advantage slots in our deck. Sylvan Caryatid is early-game ramp, and can double up if we play it after our commander is out. Wall of Blossoms is another good pick that could draw us some cards at any point in the game. I'm actually going with Ilysian Caryatid, to potentially make quadruple the amount of mana you'd expect to see from a simple mana dork!

Despite what Oko, Thief of Crowns would have you believe, there are only 17 creatures that naturally have the Elk creature type. The most relevant one for our deck is Burnished Hart, which may not be as flashy as Dawnglade Regent, but it fills the necessary ramp slots we need. If we can't play a lot of mana Elves, we'll play a mana Elk!

There are 13 available creature cards (not tokens) with the Thopter type line. Ornithopter of Paradise gives us one more creature that fits perfectly in the two-mana ramp slot on our curve, to help get Volo out on turn three.

Wurms are pretty common in Magic: the Gathering, with 68 creatures amongst them. However, there's a lesser known creature with very similar features: the Worm! With only 5 Worms total, Reef Worm is the clear standout to add to our deck. This creature can block multiple times or eat a number of removal spells before it is gone, and copying it will only be twice as annoying for our opponents.

You may be familiar with the humble 0/1 Goat token, but the Goat creature type is not as common as you may think in the world of Magic: the Gathering. There are only two creatures with the Goat type, and while both are interesting, Pathbreaker Ibex takes the cake. It can end games and is a perfect back-up win condition after Craterhoof Behemoth.

There are a number of creatures which, on face value, look like good fits for our deck, but the type line on the original printing does not match what the card’s type is now. For more information on the official creature type of a card, check out Scryfall.

Dryad of the Ilysian Grove is, unfortunately, more than just a Nymph, even though that's the only type that appears on its type line. As the name implies, the Dryad creature type was retroactively added to this card. Luckily, with only 36 Dryads, this is still a strong potential inclusion.

Regal Behemoth came at a time before Dinosaurs were a part of the game. It turns out, despite popular belief, Dinosaurs are not just large Lizards. Dinosaurs are a much more powerful creature type and there is a lot more competition to fill that slot within our deck.

I encourage everyone who builds a Volo deck to make like Volo himself and do a lot of research. There's a lot of value in finding the rarer creature types to make room to still include your favorite Elves and Beasts. Not only is it important in this deck, but it also helps you discover more creatures you may have never otherwise had a chance to play. Look through your draft chaff, too; this deck is the perfect spot to fit in all those cards that haven’t yet found their way into any decks. I love decks like this that encourage thoughtful deck building, and I think it is a challenge every brewer should take at some point.

Before I let you go, let’s take a look at just a few more creature types that don’t get enough love!

26 Avatars - There are many interesting and splashy options from the few Avatars we have at our disposal. Wandering Archaic is incredibly powerful and will make our opponents think twice before casting spells!

26 Rhinos - The newer Workshop Warchief can add a lot of value, but it also has the Warrior creature type, making it a tougher inclusion. Loyal Guardian, on the other hand, will buff up our entire team with +1/+1 counters!

24 Turtles - Many of the best creatures of each type are the big splashy finishers, but the best fits are modal cards that can fill multiple spots in our curve. Colossal Skyturtle is super flexible and can serve as removal or recursion. If we do have cast it, we'll get two big flyers to end the game with!

27 Oozes - Acidic Slime has largely been outclassed in Commander, but in this deck, where we'll copy that effect and get two deathtouchers, I think it's definitely still worth the inclusion.

There are a few more, like Serpents and Frogs and Myr, but how about we let them each shine in the decklist?

What creature types have you found for either of the Volo commander decks? Volo, Itinerant Scholar is another awesome commander that can utilize many of the same cards. Are there any cards you would include that I neglected? Let me know in the comments below.