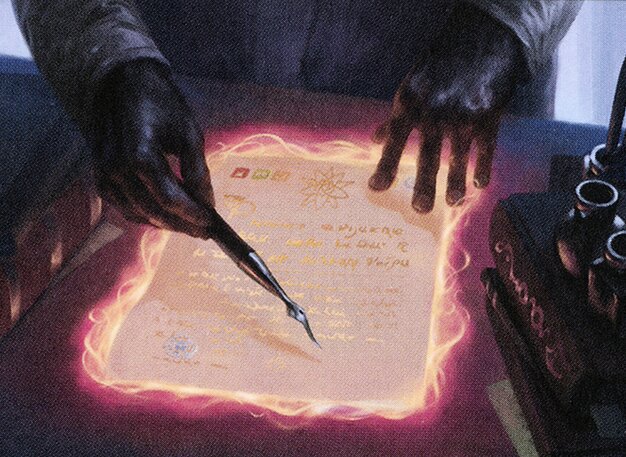 Ever had an opponent cast Tempt with Discovery against you? You look down at your hand. You see you are about to miss your fourth land drop. You know you shouldn’t take the offer, but it is just oh so tempting. You can’t risk all your opponents leaving you behind in the dust, so you bite and take the deal. Why? I propose that the answer behind your behavior can be found when we study game theory.

Now, that’s just one decision, but imagine a deck that is constantly making you offers that force you to weigh the risks and the rewards of your decisions. Sound great? Sound unbearable? Would you rather just get beaten down by Craterhoof Behemoth than have to convince your playgroup to make good decisions? Regardless of your feelings about political Commander decks, it is helpful to know what to do when you find yourself in the middle of one of the many mini-games that cards will present you.

Streets of New Capenna is right around the corner, and it looks like organized crime is coming to MtG. Just in case you find yourself getting an offer you can’t refuse in a Commander game in the near future, let’s take a look at the basics of game theory:

“The analysis of a situation involving conflicting interests (as in business or military strategy) in terms of gains and losses among opposing players” (Merriam Webster Dictionary, 2022)

Game theory was made famous by the film A Beautiful Mind. Don't be fooled by the name, though; game theory is not only about games, it can be applied to situations we encounter everyday. Let’s focus on this portion of the definition: game theory involves the analysis of a “situation involving conflicting interests”. This means that you can apply the principles of game theory to, say, the haggling you did at the farmer’s market. That raise you unsuccessfully asked for? Game theory is there too. You may not be drawing payoff matrices and assigning values to outcomes, but subconsciously your brain is using the same decision-making process.

Let’s take a look at the most famous example of the game theory, the prisoners’ dilemma. 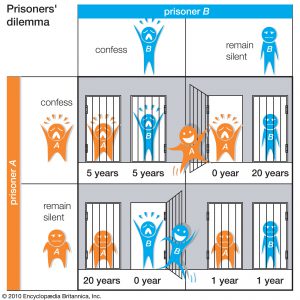 The Prisoner’s Dilemma presents one of the simplest examples of game theory in action. In this example, two people are arrested. We can assume they do not have each other’s interests in mind. They are each given the same deal: if Person A confesses and Person B does not, then Person A can go free and Person B will serve 20 years. However, if they both confess, they will each receive a 5-year sentence. Finally, if they cooperate and both stay silent, then they each only get 1 year.

Let’s Put This in a Payoff Matrix:

We can see that if they cooperate they have the least amount of combined years possible. The problem is that they each have something to gain when they confess. Additionally, when you confess you guarantee you either receive a better or equal deal to your fellow criminal. That makes this the dominant strategy.

“Dominant strategy” is a term in game theory that refers to the optimal option for a player among all the competitive strategy set, no matter how that player’s opponents may play, and the opposite strategy is called “inferior strategy.” (Ruisheng Li, 2019)

Now, let’s take a look at the card Tempt with Discovery again. This may not be a classic prisoner’s dilemma, but we can use the same principles and payoff matrices to analyze our decisions. For the sake of this example, let’s consider ourselves as player 2. Player 1 just cast Tempt with Discovery. What do our options look like?

Let’s look at two key rulings from Gatherer that play a big role in how this situation plays out:

In the payoff matrix below, the numbers on top represent how many lands each player is adding to the battlefield. The number in parentheses beneath represents how many additional lands we (player 2) would have in comparison to all our opponents combined.

There is no way we are coming out on top in this situation. Any way we cut it, we're coming out in the deficit. If we all reject we gain nothing, but the player who cast the spell only goes up one land. The problem is, we have to pick first.

In this case there is no dominant strategy. Even when we just compare our advantage on board to our opponents', we cannot guarantee coming out ahead with either decision. If we reject the offer and player 3 and 4 accept, then they are each up a land on us and player 1 is up 3 lands on us. This scenario is a nightmare and almost guarantees we'll be too far behind to come back. However, if we take it, each of our opponents likely will too and player 3+4 will combined search up more lands than us and player 1 will be up 4 lands.

Herein lies the problem. We can’t trust our opponents. Do we take the bad deal because of how behind we'll be if our other opponents take it? Although there is not an obvious dominant strategy, we can make some assumptions to help our decision. The upper two boxes on our payoff matrix are unlikely to occur. Chances are if we as the first player take the offer, then the following two will as well. Now let’s take a look if we reject. If we reject and our players 3+4 follow suit, then player 1 just spent four mana and a card for one land.

This looks like an argument for why you should not take the deal even if you fear your opponents will. So why then am I putting it into my deck at all? Aren’t there cards that are more powerful and consistent? Definitely, but it is important to remember that it's okay to build sub-optimally for the sake of fun or theme. Even as a competitive math-nerd myself, I recognize that this is a game and games should be fun! We can use math for more than just optimization.

Let’s take a look at some lesser-played political cards. Rootweaver Druid sees play in just 3,704 decks. Tempting Contract sees play in only 6,586 decks despite being able to fit into any deck.

Why don’t these cards cut it? They present a different scenario to the Tempt cycle. The Tempt cycle gives us something even if our opponents do cooperate and don't take the deal. This means that they'll always come out below us in total assets gained. In these cases cooperation means that our opponents can prevent us from gaining any advantage while we waste a card. A 2/1 for three mana or a do-nothing artifact are not going to cut it.

There are, however, more cards similar to the Tempt cycle that force our opponents to make the decision of if they want to gain nothing while we gain something or if they want to let us have a little more while they gain a lesser effect.

Let’s take a look at a favorite of mine, Druid of Purification. In theory, this is an over-costed Reclamation Sage. If you choose an opponent’s artifact and all players follow suit then that's exactly what it is. However, if you choose a permanent controlled by the player to your left, they now have a tough decision to make. Do they trust that their other opponents will make the same decision, or do they take out another permanent that's causing them issues. This card can easily become a 3-for-1 if your opponents are greedy enough.

Orzhov Advokist is another great example. If our opponents decline the offer, then we get to put counters on our creatures at the beginning of each of our upkeeps. If our opponents take the deal then we gain temporary protection. Leveraging political cards is all about understanding your payoffs and your opponents’ risk to decide which cards are worth playing.

Let’s take a look at the rest of our Kenrith, the Returned King political deck:

Political cards can be an interesting way to spice up your Commander games and challenge your friends' reasoning and logic skills. There are so many more options, and I want to hear how you are getting political in your Commander experience. Let me know in the comments below what your favorite political/mini-game cards are! I can't wait to hear the creative and evil ways you all are letting your opponents beat themselves.