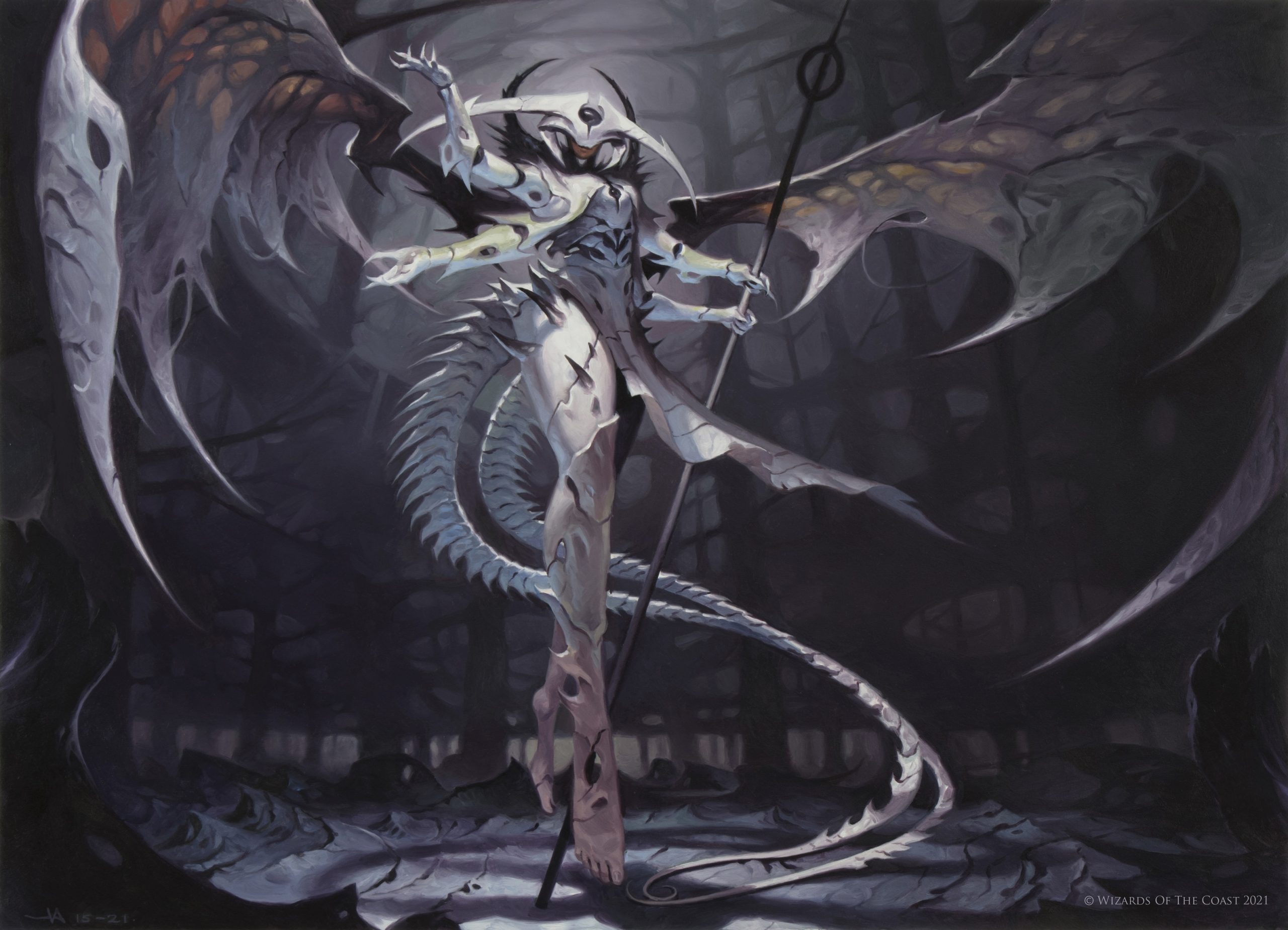 The first place I turn when building a new Commander deck is the EDHREC page for that commander. EDHREC may be the best resource out there, but knowing how to use it well is the most important skill. Today, I wanted to look at how to interpret the data EDHREC provides and what tools can supplement our site. Let's walk through my deckbuilding process from top to bottom to see how I use the site and leverage the tools at my disposal. What better way than looking at the most popular commander out there?

Atraxa, Praetors' Voice is the most popular commander of the last two years. Her page is full of data, but it can be incredibly difficult to parse through. There are two main reasons this page is so cluttered.

First, this deck was originally a preconstructed deck. Whenever building a deck that was originally a preconstructed deck it is important to consider the impact this has on the data. Over 5 years later, Crystalline Crawler still sees play in 26% of Atraxa decks despite not even appearing on the +1/+1 Counters theme page. Almost half of the decks (3,348/7,484) that the card appears in are Atraxa decks.

Second, a staggering 46 themes appear on the Atraxa page, ranging from Planeswalkers to Fungus tribal. This is why we see Carth the Lion appearing next to Fathom Mage despite the lack of synergy between the cards. If we tried to port over the average Atraxa deck and play it in the wild it would be a jumbled mess of not enough planeswalkers for a Planeswalkers deck and not enough payoffs for a +1/+1 Counter deck.

That isn't to say this data isn't useful, but how can we best leverage it?

Atraxa, Praetors' Voice is an open canvas, so this deck can be taken in any number of directions. My personal preference is to go beyond the popular themes and take advantage of our commander's Proliferate ability in more unique ways. Sagas are certainly interesting, but without a dedicated Energy commander, I turned to Atraxa to make this niche mechanic work.

A quick glance at Atraxa's page will quickly clue you into the fact that nearly none of these cards explicitly fit our strategy. Let's take a look at the Theme filter and switch it to Energy to see the top cards from the 216 Energy decks built in the last two years. 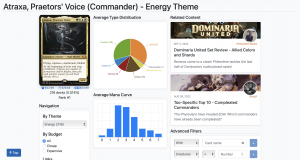 Here we see the best payoffs for the energy counter mechanic. Architect of the Untamed allows us to turn our land drops into energy. Aethersquall Ancient and Demon of Dark Schemes can clear creatures off the board while adding energy counters.

We also see Proliferate and counter engines such as Evolution Sage and Winding Constrictor. While this page is full of cards that add energy, I want to lean into these Proliferate abilities to better leverage the best energy cards rather than packing my deck full of some of the less exciting energy cards. However, the EDHREC page does not have as many as I would like to add. Where do I turn next?

The tool I most frequently use to supplement EDHREC is Scryfall. Scryfall has a robust database of every playable card in Commander. You can filter through cards to fit any criteria you would like even down to the artwork. For this deck, we want to search for energy (using the energy symbol) in the text box. We can also search for any cards that use the Proliferate mechanic. 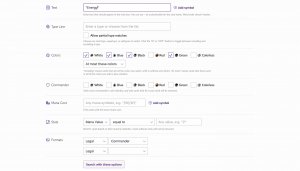 Scryfall not only shows you cards that many other players will be missing, but using it as a tool can make you a better player. Card analysis is a skill, and the ability to sort through the bad vs the good is something that needs practice. Scryfall lets you flex this muscle and find some of the lesser known gems.

Many cards that do not show up at the top of Atraxa's Energy list can be found here. Many of the cards that are not explicitly energy-related are less popular, but these are the cards that allow the strategy to run smoothly. Grateful Apparition, Guildpact Informant and other cards that Proliferate on combat damage can add extra energy counters each turn. This is just one example of cards I found on Scryfall that do not appear in Atraxa's average energy deck.

Once I know what cards fit my strategy, I turn my attention to balancing the lands, creatures, and spells within my deck. Now, I've talked extensively about using the Hypergeometric Calculator. This is most commonly used to build a land base, but I have found a variety of ways to use it to determine how many of each card type I need within my deck to make my strategy work.

Check out my article here to see an example. This deck required me to apply these principles to the energy strategy. Energy is a parasitic mechanic, meaning that the only applicability it provides is to other cards in the archetype. The problem is that I need to consistently draw these cards, or my energy will go to waste. You will note my deck is packed with cards that are weaker, but work towards the strategy of creating and using energy counters. I had to remain disciplined and cut some of the more exciting cards such as Roalesk, Apex Hybrid for the less interesting Peema Aether-Seer. The power level is lower, but without enough sources working towards my main strategy, I would not even be able to take advantage of the Proliferate ability on the more powerful card.

Last and certainly not least, a deck requires a strong mana base!

Building a Four-Color Land Base

The go-to reference for many building a land base is Frank Karsten's How Many Colored Mana Sources Do You Need to Consistently Cast Your Spells? This article gives an idea of how difficult it is to cast a spell with multiple pips in a multicolor deck. For example, Aetherstorm Roc costs 2WW, which means to consistently cast it by turn 4 in a 99-card deck, we would need 26 sources that can produce white mana. Obviously, these can't be 26 Plains, or we would not be able to fit anything else in our deck.

Obviously, this means we need dual lands. No, not Scrubland (unless you have one), but shocklands like Godless Shrine are crucial. Coming into play untapped is huge, and our latest trip to Innistrad brought us a great new cycle, including Shattered Sanctum. Finally, the “tricycle lands”, such as Raffine's Tower, allow us to have three sources on a single card, and many of the Streets of New Capenna versions are still under $10.

Okay, but how are we going to ramp these cards out? The most popular ramp spells, such as Cultivate and Kodama's Reach, can only find basics, and if our deck is full of dual lands then we can't find them with these spells.

The best cards to invest in (after lands) to create a consistent land base are the two-mana ramp spells that can find nonbasics. Farseek, Nature's Lore, and Three Visits allow us to find any color, and the latter two even bring the lands in untapped. Most importantly, these spells allow us to cut down on basics and make room to hit the quotas of colored sources we need to cast spells on time.

Building your land base is the unglamorous and least fun portion of deckbuilding. However, taking a look at your ability to cast your spells on time will help you select the best cards for your deck and have as much fun playing it as possible.

I understand that not everyone can realistically put together an expensive land base like the one suggested here. If that's the case, these principles are even more important for those players. Sometimes concessions have to be made to help your deck function. Mana-intensive cards, such as Aetherwind Basker or Farewell, might need to be cut if your land base can't consistently support them. Decks can still be extremely strong without these cards, but what is most important is recognizing when and when not to include them.

"Net-decking" or repurposing a decklist online for yourself is not inherently a bad thing. Learning from decklists and these sites is an awesome way to improve at Magic, and as long as you are not passing off someone else's creation for your own, then there is no harm in it. EDHREC and many other tools out there will make you a better player. You just have to know how to use them and how to learn from them and adapt the data to fit your strategy and play-style. I hope this walkthrough gave you some ideas of how to think critically about your own deckbuilding and how you take advantage of EDHREC and the resources available to you.

Check out the full decklist below: