Solve the Equation - The Huge Gap Between 1 and 3 Damage 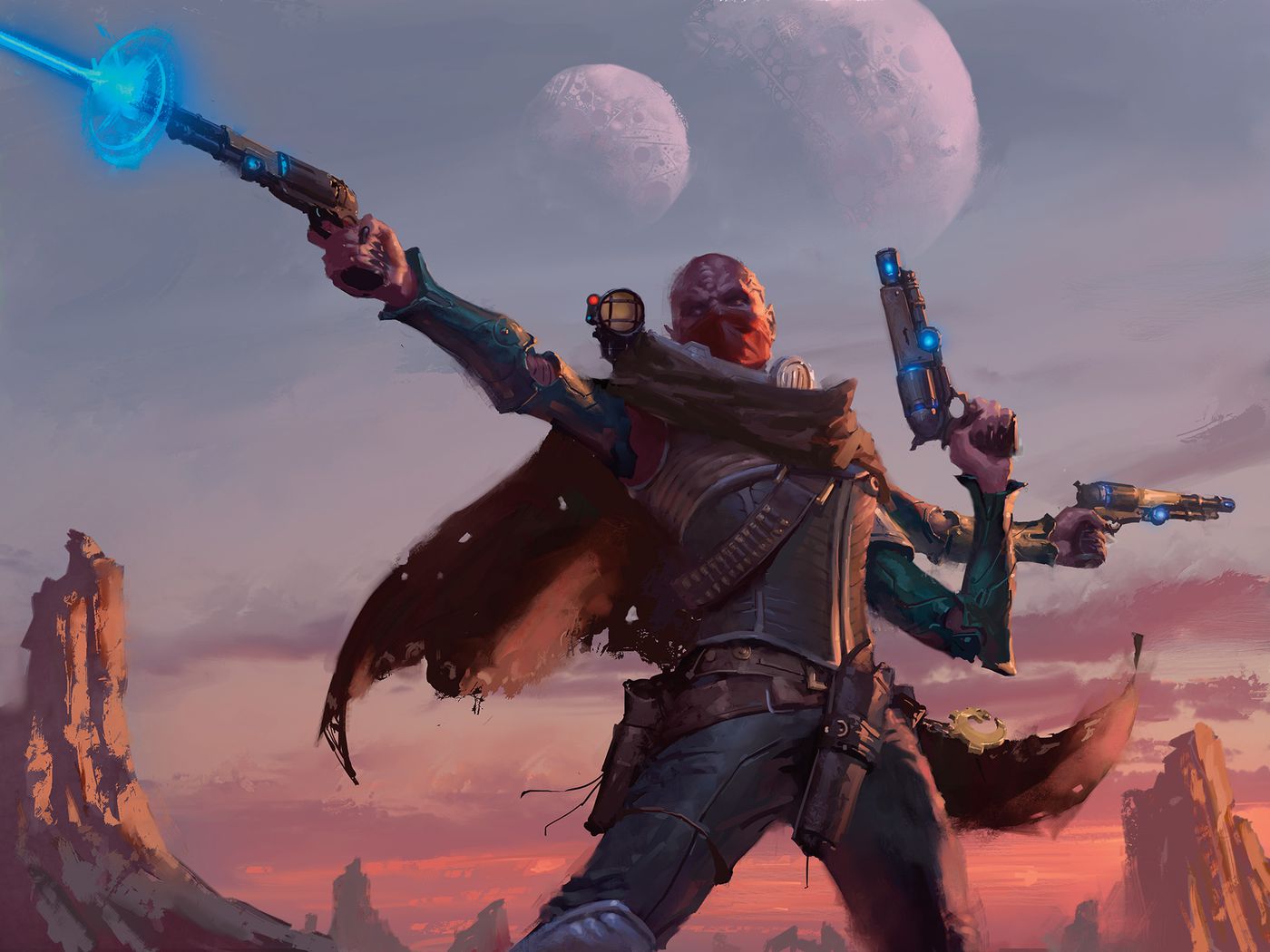 The margins between what makes a card great and what makes a card unplayable are incredibly slim. Take Lightning Bolt, for example. Lightning Bolt offers 3 damage for a single mana, and that's good enough to make it a Modern staple. Shock is almost a strict downgrade, dealing 2 damage, but it'll still see play in Standard when it's legal. The gap between 1 and 2, however, is massive. There's not even a comparable instant-speed spell that deals one damage for a single mana. Every spell in this category has a significant upside, such as Spikefield Hazard or Lava Dart. This is because, while 3 or 2 damage at that rate is great, 1 damage is virtually unplayable.

However, with the Warhammer 40K Commander decks, we have a commander who just might make a single point of damage lethal. Enter: Ghyrson Starn, Kelermorph. This commander's ability reads “Whenever another source you control deals exactly 1 damage to a permanent or player, Ghyrson Starn, Kelermorph deals 2 damage to that permanent or player.” That's triple the damage! A card like Needle Drop basically becomes a Lightning Bolt that cantrips.

However, to many, there is an even more exciting direction to take this deck, and that is by using the ol' Tim himself: Prodigal Sorcerer.

The Return of the Tim

Magic: the Gathering has a long and treasured history of nicknaming cards. Dark Confidant is better known as Bob, Mother of Runes is Mom, and of course Sakura-Tribe Elder is Steve. One of the classic examples of this is Prodigal Sorcerer, so named due to his resemblance to Tim from Monty Python and the Holy Grail. “Tim” has now become an overarching term used to describe “pingers”, or cards that tap to deal a single damage to any target.

Pingers like Tim can be used to deal the last point of damage to a creature, but with our commander, they become a Lightning Bolt each turn. Just looking at the top 100 commanders over the past two years, a single point of damage only kills four of them at their base toughness or loyalty, but 3 damage kills 29 of them. When you stack up these effects, the difference becomes even more clear. Two pings at 1 damage each only kills 16 of those top commanders, while two pings at 3 damage apiece is lethal to 93 of the top 100 commanders.

So which of these effects are the best? The going rate for this type of effect seems to be three mana, so anything better than that is a great rate. Unfortunately, Razorfin Hunter is the only creature that meets this criteria. However, there are a few that can beat that three-mana rate, with the addition of haste allowing it to deal damage the turn it is cast: Cunning Sparkmage and Izzet Staticaster fit that bill.

Other pingers have a triggered ability that allows them to untap. Cinder Pyromancer, Goblin Sharpshooter, and Chandra, Fire of Kaladesh can all do this, and Goblin Sharpshooter can function as almost a one-sided board wipe for all creatures your opponents control with toughness three or less.

There are also more narrow pingers with a restriction on what they can target. Usually, these would never find themselves in a deck, but with the consistent damage upgrade this commander offers, they might be worth it. Goblin Fireslinger and Spear Spewer can only hit opponents and not other creatures. Personally, I don't think the Goblin Fireslinger is up to par only hitting a single opponent, but I think Spear Spewer offers enough value to be included.

Finally, we have the big creatures that can do more than just deal damage. Any of the Izzet versions of Niv-Mizzet fit great in this deck. Niv-Mizzet, Parun deals a damage each time we draw a card, and Niv-Mizzet, the Firemind is quite literally a huge pinger that can tap to draw a card and deal 3 damage. Pair these two together and the game will end in extremely short order. Another example is Endbringer, which untaps itself on each other player's turn. In a pinch, it can even draw cards, and all at the cost of including a few colorless sources in our deck. Syr Carah, the Bold offers us a pinger that has card advantage stapled to it. All these creatures are also much bigger, meaning that they can sit behind to block and we can activate them at instant speed after they survive combat. This means that we can deal out massive damage without having to go shields down.

This deck may be the best home for this subset of cards, but it's not as much of a one-trick pony as it may seem. There are plenty of cards that synergize without this ability outside of pingers.

On rare occasions, pingers are best utilized in your own combat phase. One prominent example is right after you drop Hellrider. Hellrider turns each of these creatures into an additional three damage that is effectively unblockable, and that's all before they even deal combat damage. This is a great option to turn our commander's advantage into a winning turn. Our deck is full of creatures, which takes Witty Roastmaster from a Limited underperformer to a potential game-winner in Commander. Tunneling Geopede and Spiteful Prankster have similar triggered abilities that are enhanced by this commander.

Chandra's Incinerator and Toralf, God of Fury can turn all the noncombat damage that we're throwing around into even more damage. Many innocuous enter-the-battlefield abilities, such as Dagger Caster or Goblin Chainwhirler, get a lot scarier, while others that are already very strong, such as Inferno Titan, are utterly ridiculous when you consider that the Titan can Lightning Bolt three targets upon entering and attacking.

Beyond creatures, this ability is a huge boon to a number of cards that are generally underwhelming. Blazing Volley and Electrickery can act as one-sided board wipes, with Electrickery even offering instant speed. Our commander's boost is best utilized on cards that spread the love/damage. Grapeshot, Magic Missile, Pyrokinesis, and Electrolyze are all all-stars in this deck and can all deal out six or more damage regularly.

We also can think a little more outside the box. What are some of the options that synergize a little less obviously with our commander? First and foremost, a classic from the pinger strategy, and that's Willbreaker. This is a tricky one to include in this deck, but it's more than worth it. What makes it a little trickier is that with our commander's ability, we'll only be able to take control of those creatures for a moment before the damage goes through and kills them. To mitigate this downside, I believe this card is best used after the table removes our commander, leaving us without a way to maximize our pinger damage. If we're patient and hold on to this card for the right moment, we might just catch our opponents out after their removal is expended.

This also might finally be the home for Body of Knowledge. This card always gets cut from my decks as it just does not do enough, but this deck is the exception. Our pingers can turn all their damage into cards while also making Body of Knowledge a massive threat.

There is no shortage of ways to use this ability, but what's the glue that makes it all work?

The best way to take advantage of our pingers is with effects that untap our creatures. Dramatic Reversal offers us a one-time untap of our entire team, and it's a great way to push through the last bit of damage or to finish off an explosive turn. However, we want to be able to do this reliably. Vizier of Tumbling Sands, Kelpie Guide, and Aphetto Alchemist all can untap our creatures, and the first two even function as ramp in a pinch and can untap our lands, while Freed from the Real lets us repeatedly tap and untap our best pinger.

We can also leverage both Curiosity and Ophidian Eye as card draw engines, and they even have the upside of being a combo piece with Niv Mizzet, but both the card draw and damage is only useful if we're able to activate before our creatures are killed. Giving them haste is huge, and we have plenty of options in these colors. Tuktuk Rubblefort is clunky at three mana, but can do the job in a pinch. I prefer Anger, as it works well with red's draw effects that require discarding, such as Thrill of Possibility. Thousand-Year Elixir does a little bit of everything untapping our creatures and giving them haste.

What I love most about this deck is that it utilizes cards that are otherwise not very useful. This example is only one direction you can take this deck. It's more open-ended then it first appears and would make a good burn deck or go-wide deck as well. However, if you love pingers, this is certainly the commander for you. There are so many good pinger effects and shenanigans to leverage them. I want to hear the best that I missed in the comments below.