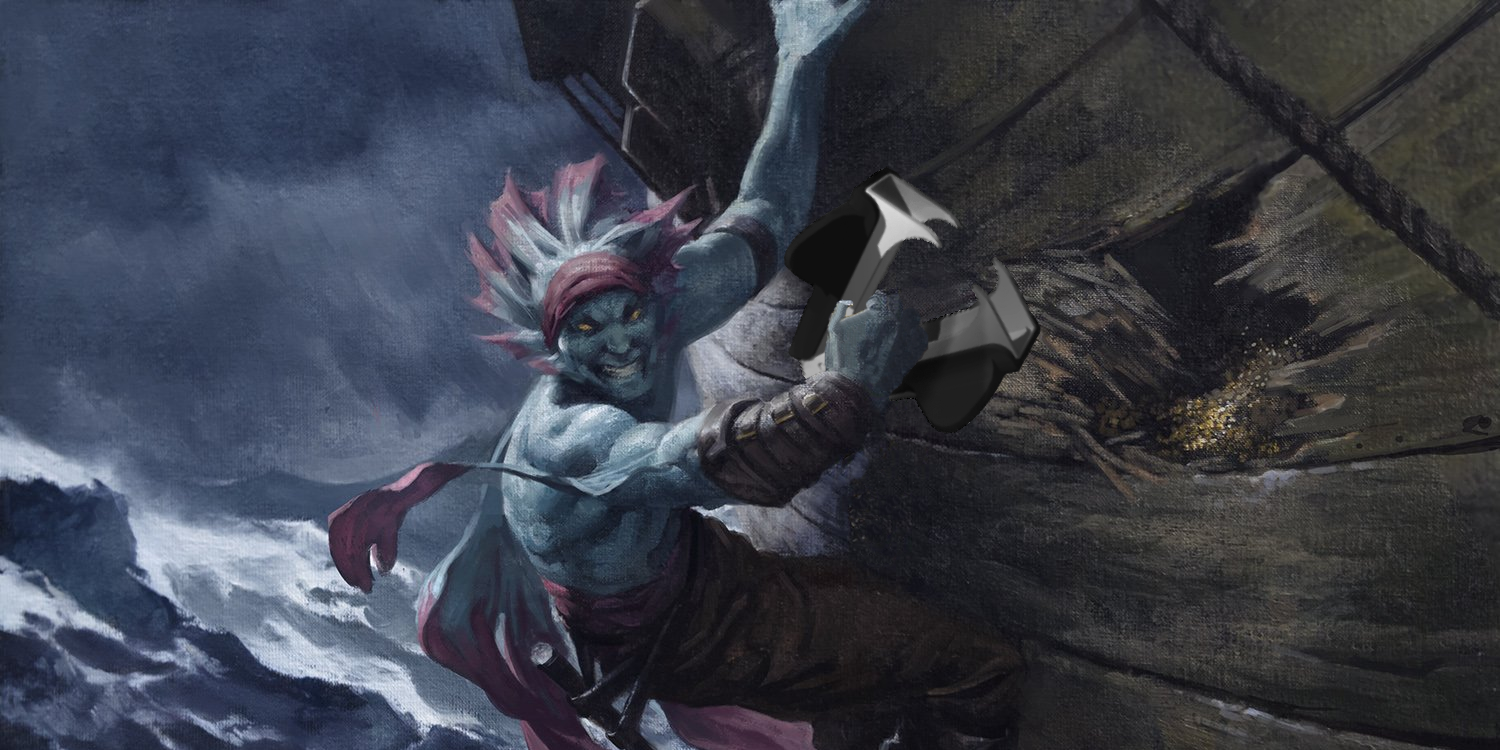 This last month saw a momentous occasion: the Commander Rules Committee banned Hullbreacher from the Commander format. With this announcement, many people are in the unique situation where they want to find a replacement for Hullbreacher in their decks - hence, the existence of this article! If you have a sudden vacancy in the wake of this announcement, I suggest you read on!

Hullbreacher has been turning opponents' card draw into sweet, sweet mana advantage all over Commander since its release last November. It's best described as an aikido effect: an effect that takes an opponent's strength and turns it against them. Turning the strength of card draw into Treasure isn't the only way to create aikido effects in EDH; the most famous example is redirecting damage using Deflecting Palm, or stealing card draw using Plagiarize effects.

As I look for new cards to fill the breach in my deck's hull, I look for cards that fill this same niche, by either removing or gaining an advantage off of my opponents' card draw, thus hindering their ability to gain a large advantage in-game. Of course, since Hullbreacher does this in such an incredible way, it can be difficult to find apt comparisons; as such, I'm broadening my horizons a bit to encompass other colors besides just mono-blue.

Hullbreacher is an incredibly powerful card, but it's not like there's no precedent for it. One of the closest analogues to it is Notion Thief, a four-drop with flash that steals your opponents' card draws for yourself. This card has a similar capacity for blowouts to Hullbreacher, but generally has weaker synergy with one's own wheels, such as Windfall, and the increased cost (and the feel-bads it causes) makes it a lot rarer than Hullbreacher.

Instead of stealing or replacing your opponents' advantage, some players like to accrue advantage of their own on top of their opponents'. This is where Smothering Tithe and Consecrated Sphinx come into play. Both of these cards offer incredible amounts of advantage (in mana and card draw, respectively) whenever your opponent tries to pull ahead in card draw. There's much more redundancy to this effect than people realize, though. More on that later.

Sometimes it's easier to just tell your opponents "stop". Narset, Parter of Veils, like the already-banned Leovold, Emissary of Trest, offers little advantage on its face compared to the aforementioned cards, preferring instead to simply deny advantage to your opponents. In the right playgroup (and the right deck), that can be enough of an advantage by itself.

The sight of these classic cards won't come as a surprise to almost any veteran Commander player. However, there are a multitude of other effects that mirror them, and many deserve some time in the spotlight, too.

Deterrents in the Command Zone

Nekusar, the Mindrazer was the first among an increasingly popular sort of card made to punish those who get too greedy with their card drawing. Nekusar is pretty simple compared to the latest iterations; it merely acts as a Howling Mine with Underworld Dreams attached to it. However, simple can stille be powerful, especially when coupled with effects that force players to draw cards.

Xyris, the Writhing Storm is one of many Ikorian commanders that synergize well with wheels. It goes down The Locust God route, except it creates tokens whenever your opponents draw cards, which you can then attack with, sacrifice, or otherwise weaponize in a myriad of ways. Both also comes with a built-in (and pretty potent) card draw ability, should you ever run out of gas.

My personal favorite in this category is Zurzoth, Chaos Rider. Very few cards will make Rhystic Study fans as sad as this one, as such cards play directly into the hands of Zurzoth. Moreover, it manages to combine the token-creating strategy of Xyris, the Writhing Storm with the direct-damage approach of Nekusar, the Mindrazer, all while benefiting you for any devilish exploits.

If you're enticed by Nekusar, the Mindrazer, but you'd rather have the effect in the 99 of a deck rather at the helm, then you're in luck! There's a boatload of redundancy for the effect. Spiteful Visions, Phyrexian Tyranny, Kederekt Parasite, Curse of Fool's Wisdom, and the aforementioned Underworld Dreams are among the many examples of cards that could have a home in group slug decks, or that even break parity of group hug effects. Like Zurzoth, Chaos Rider, most or all of these cards synergize beautifully with symmetrical rummaging effects like Burning Inquiry, too.

There's another section of cards that will damage players based on how many cards they have in their hand. The most famous of these are The Rack and Black Vise. You can include a myriad of cards that punish all hand sizes besides your own, making it that much harder for enemies to get the upper hand.

One of my favorite hand-size-hate effects is Fevered Visions, not only because the damage is asymmetrical, but because it also draws you cards and helps your opponents get to the point where they take extra damage. All of these effects synergize with damage-multiplying effects too, like Fiery Emancipation or Obosh, the Preypiercer. This entire section of cards works best if you find your games dragging on a bit too long... or if you just have a taste for good ol' Rakdos violence.

Long-time fans of Staple Remover will recognize Psychic Possession, as I marked it as one of my favorite replacements for Rhystic Study. Well, my love for the card has not yet diminished, as it still serves as a fantastic deterrent against particularly greedy value players. Just find the commander most likely to draw cards (let's face it, probably the Simic player), and stick this on them to force them to either rethink their gameplan or stumble into your mountain of advantage. Psychic Possession works especially well if you just love having the right answer at just the right time.

Wolfcaller's Howl makes a decent impression of Xyris, the Writhing Storm in the 99, if you're looking for such a thing. It's not nearly as explosive as Xyris, but you could definitely do a lot worse than an extra three tokens per turn, especially if you need those tokens for any Aristocrats or tribal-based strategies.

Finally, another personal favorite of mine is Uba Mask, a predecessor to mono-red impulse draw. On its own, it reveals information about your opponents' would-be draws to the entire table, and interrupts their planning by giving them a limited window to cast said cards. Additionally, recent commanders like Nassari, Dean of Expression, Laelia, the Blade Reforged, and Prosper, Tome-Bound turn Uba Mask into a potent synergy piece. 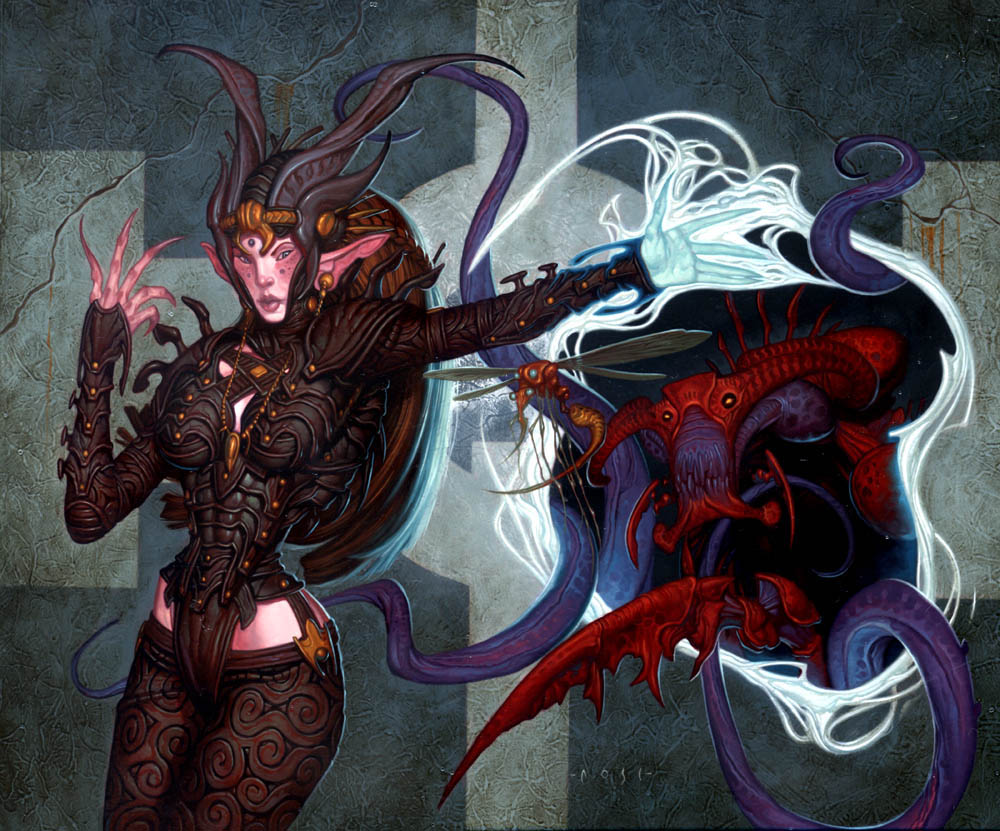 My final pick for today is not for the faint of heart, nor the inexperienced player. I'll call it what it is: Zur's Weirding is a stax piece, and a bizarre one at that. Some players will simply not enjoy playing against it, and those who are okay with stax might still have a hard time resolving draws while Zur's Weirding is out, because it gives so much information to inform a relatively simple decision repeatedly throughout the course of a game.

However, if you believe it's suitable for your playgroup and playstyle, Zur's Weirding can be an impressively potent card. It allows you to control your opponents' hands in a way that suits you while you play around it. You can achieve this by simply playing an additional replacement effect, such as Abundance or Underrealm Lich, or you can simply build around the discard synergy using Madness cards, reanimation, and more.

If you're excited to find some fairer ways to hate on card draw in your games, here's a modified Obosh, the Preypiercer EDHREC average deck, loaded with some great draw-based group slug cards to chip away at your opponents' life totals.

Did you run Hullbreacher in any of your decks? Did you find the draw hate to be worth it? If so, what cards are you putting in Hullbreacher's place? I'd love to know in the comments below!