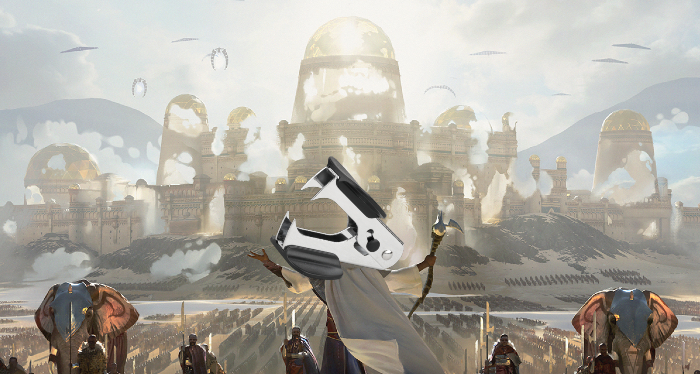 The Zhalfirin Void. Teferi's Isle. Accidents, sure, but also, mistakes of the past - er, future, or whenever they show up again. Point is, now, such a mistake could never happen again, as Teferi has finally mastered Phasing magic, making everybody's lives all the better.

Need to babyproof the house for Niambi? Just remove every single hazard from this timeline! Has a spider built a web over her crib, scaring her? Just poof that thing into next Wednesday.

And this mastery couldn't have happened at a better time, as Teferi has found himself in the direst of situations: Jhoira has showed up, offering to take him on a luxury cruise on the Weatherlight, and nobody's around to house-sit for Teferi! It'd be absolutely dismal if he came home to find all of his plants dead, after all. So, in proper application of his godlike powers, he casts Teferi's Protection, phasing his house out of existence for the next two weeks.

He arrives home just in time for it to reappear - but something is wrong. The bricks are all cracked, vines are growing over the walls, and his prize-winning tulips have withered away! As it turns out, instead of making it so no time passes for his home, a hundred years have passed in the span of two weeks, leaving it subject to neglect in some other timeline.

Of course, under careful supervision (and a little time magic), Teferi can grow his tulips back, but what would he have done had this been an irreparable mistake? In the heat of battle, you can't afford to phase out your allies for a century; most humans couldn't handle that. Maybe it's time to look for some alternatives to protect his allies....

Not Just a Phase

Teferi's Protection is often cited as one of the most potent mono-white cards printed within the last few years, alongside Smothering Tithe. Teferi's Protection protects like no other, allowing you and your entire board to blink out of existence for an entire round: phased-out permanents are simply treated as though they don't exist, allowing them to dodge any and every threat that exists in the game. A phased-out permanent is even better-protected than the mythical Progenitus! You even get to keep your tokens!

Of course, losing all of your permanents for several turns could have dire repercussions, which is why Teferi's Protection also gives you protection from everything. By protecting both you and your permanents, this spell will allow you to survive nearly any situation you find yourself in. It's so good at what it does that it can even combo with Lethal Vapors to allow you to sit out the rest of the game while your opponents deck themselves, in a typical Zhalfirin fashion.

But as fun as these things are, Teferi's Protection brings with it some potential problems. The most glaring of them is that the darn thing costs more than Hades, a hefty price to pay for a one-off effect that doesn't advance your board state at all. Certain decks and metas have some better options that will serve them better. 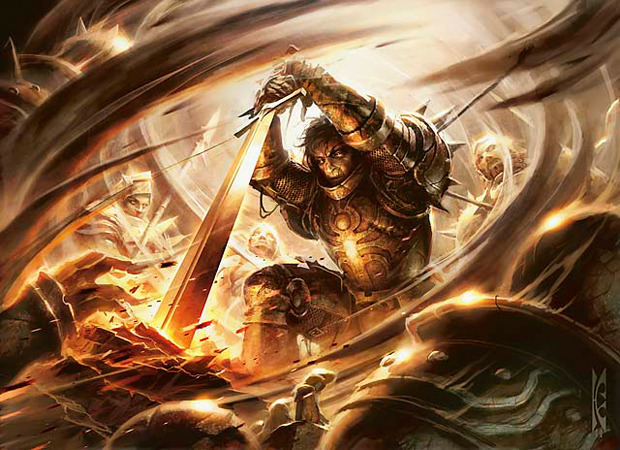 Ultimately, the utility of Teferi's Protection is that it will save you and your board from catastrophe when you need it. Here, we're looking for alternatives that can either save you or help you recover quickly, all while having potential to offer more value than our Staple card.

One of the better candidates to use instead of chronomancy is actually a brand-new card, and one of the biggest sleepers from Zendikar Rising: Linvala, Shield of Sea Gate. Many are turned away by her Party ability, but her major utility goes far beyond that: being able to sacrifice herself to protect your team (either with indestructible or hexproof) is incredibly useful, and is mostly an upgrade from the already playable Dauntless Escort. Although Linvala, Shield of Sea Gate and Dauntless Escort don't advance your board state much more than Teferi's Protection, they are potentially reusable, allowing you to get more out of them at the expense of a little versatility. If you can manage to trigger that Party ability, it's just a sweet bonus!

Reanimation is also a very viable strategy to take, especially with the numerous "reactive reanimation" cards that we have access to, like Second Sunrise. Despite their lack of popularity in EDH, any strategy banworthy in Modern has a lot of potential in the format. Second Sunrise, Faith's Reward, Gerrard, Weatherlight Hero, and Brought Back all have the potential to two-for-one your opponents when they cast board wipes or kill spells, or they can just return your permanents back after you've sacrificed them all for value, in the classic Modern Eggs fashion. Some of these cards can even mana ramp when played with Fetchlands!

If reactive reanimation isn't your cup of tea, white is secondary in regular reanimation, too. We already covered several different types of black reanimation spells in a previous Staple Remover article, but white has awesome contenders to offer, like Sevinne's Reclamation. In a pinch, they can allow you to rebuild as fast as possible after a board wipe or combat gone wrong, but, outside of those situations, they can still generate formidable amounts of value, where Teferi's Protection would just be a dead card in your hand. Like black, white also has some mass reanimation options, such as Open the Vaults, Replenish, or the new Triumphant Reckoning to really kick it up to 11.

Out of all the cards to slot in instead of Teferi's Protection, my personal favorites are a pair of mass-blink spells with oddly macabre names: Eerie Interlude and Ghostway. Exiling your creatures until the next end step is functionally just as good at protecting them as Phasing is, with the added bonus of triggering enters-the-battlefield and leaves-the-battlefield triggers. Because of this, decks designed specifically to abuse these triggers, such as Roon of the Hidden Realm or Brago, King Eternal especially love them. But other decks make good use of them, too, as they both remain much cheaper and easier to abuse than Teferi's Protection while still fulfilling their roles exceptionally.

Winota, Joiner of Forces is a force to be reckoned with, quickly becoming the most powerful Boros commander in terms of value (and often, damage output). But like most Boros decks, Winota decks have to commit heavily to the board. To alleviate this, many Winota decks run a full suite of protection spells, often on Humans such as Gerrard, Weatherlight Hero or on instant spells such as Eerie Interlude. Overall, Winota makes better use of cards that she can flip off the top of the library with her ability, or cards that can sometimes synergize with her token-generators like Geist-Honored Monk. Here's my decklist for Winota, created just after her release:

What do you do to ensure that your deck never falls prey to a board wipe? Do you prefer to just muscle through them and hope you come out on top? Let me know in the comments, or elsewhere on social media such as my Twitter, the EDH subreddit, or RC Discord.