Urza’s Ruinous Blast led to more than just the destruction of Argoth and the scarcity of Gaea’s Cradles: the effects were felt far and beyond the now Shattered Isles, with changes to the climate everywhere from Yavimaya to Tolaria West. At first, it was merely snowfall, a couple of inches of icy powder bringing joy to the children of Dominaria.

But as time went on, Dominaria’s weather became more and more erratic: Llanowar experienced a Toxic Deluge, causing dozens to Languish in despair and filth. A Deadly Tempest beset Jamuraa, and Keld was beset by a Plague Wind.

As Dominaria’s Ice Age drew closer, it became more and more necessary to ready oneself against the storm. To do so, one must know what to expect and how to deal with it.

For a mere three mana and a variable amount of life, Toxic Deluge can give a sizeable debuff to all of the creatures on the battlefield, even killing them with a large enough payment of life. This method of wiping the board dodges keyword abilities such as indestructible or Protection, giving it a bit of a leg-up over other board wipes such as Blasphemous Act.

But the downsides to Toxic Deluge can be game-changers. In situations where you lack the life to pay and the will to play this card, it can seriously falter. As a result, we’re going to be looking at some alternatives that can be kinder to your life total, your permanents, or your wallet!

Toxic Deluge falls under the umbrella of board wipes and general board control, so for our replacements, we are looking for black cards that can better fill that slot in certain decks, metas, and situations.

Black has a diverse array of efficiently costed sorceries which apply a debuff to several creatures’ power and toughness, such as Golden Demise. These cards can apply a smaller debuff than Toxic Deluge without the life payment, plus some extra bonuses. If you’re in a meta that has a substantial number of token decks or utility creatures, like Deathrite Shaman, cards like Demon of Dark Schemes can be perfect for our deck.

Dead of Winter may lack the added utility of the aforementioned cards, but it can still be a respectable board wipe on its own. Similar to Mutilate, Dead of Winter can make good use of a mana base incidentally full of snow basics or Swamps to fill our Staple’s role. If you’re running snow lands, you may want to consider running Blood on the Snow, which gives you added flexibility and the utility of a Necromantic Selection.

In a set that was jam-packed with planeswalkers, legendary creatures like Massacre Girl often go unnoticed. If a single creature dies from the initial trigger, Massacre Girl is more than likely to create a chain effect that will result in her being the lone creature on the battlefield. Many decks consider her higher mana cost to be well worth it in exchange for a useful, easily recoverable body. 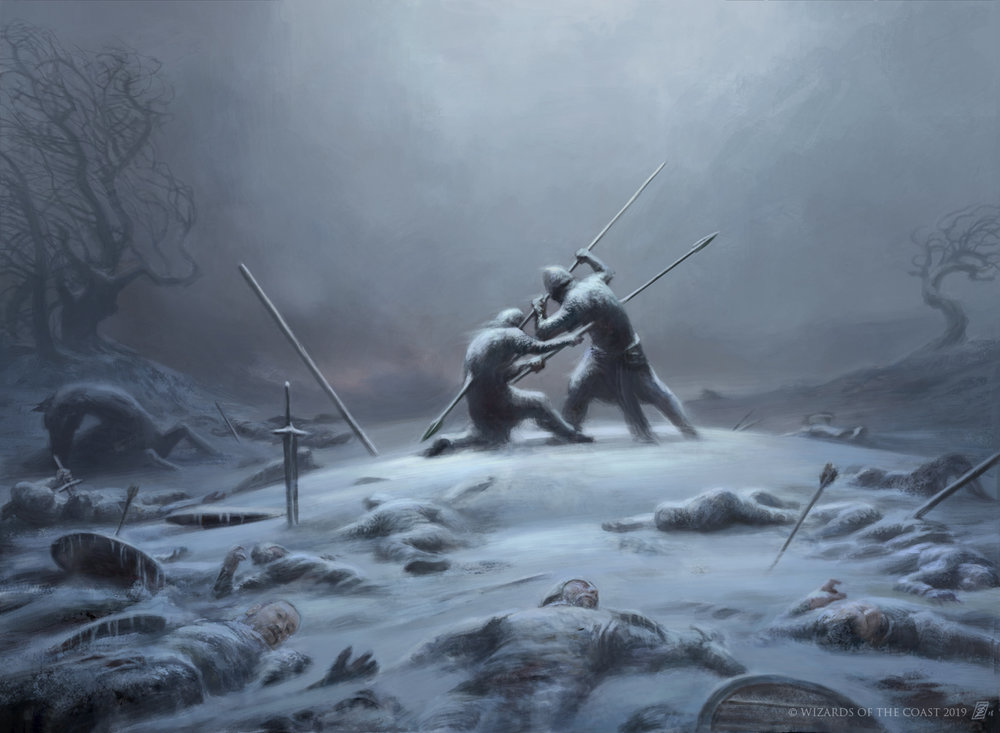 Force of Despair is the perfect high-risk, high-reward card. Worst-case scenario, it’s a reactive Murder that can be cast for no mana while dodging hexproof and shroud, which, by itself, isn’t a bad card, but when your opponent dumps a handful of creatures onto the battlefield, Force of Despair becomes a blowout.

Board wipes are most useful to take the leading player down a peg, resetting the board so that the other three players have a chance to win, but in most of these situations, Force of Despair can wipe out the leading player exclusively. This allows you to play much quicker than you otherwise would, giving you an opening with which you can take over the game from any other contenders at the table.

Force of Despair doesn’t work as well against all decks, though. Against slower decks that don’t put out as many creatures in a turn, it’s more akin to a removal spell than a board wipe. But there are numerous decks that can be blown out by Force of Despair, like Lathril, Blade of the Elves, which is weaponizing some of today’s replacements below:

There are dozens of ways to control the board or to wipe it completely in black EDH decks. Which ways do you prefer? What would you have included had you written this article? Feel free to drop a comment!

Jaelyn is a student educator, musician, and civil rights advocate based in western Washington State. She first started seriously playing Magic: the Gathering at the Rivals of Ixalan prerelease, and has been slinging spells ever since. You can find her on most sites at @rosequartz_26, although she's most active on Twitter.