Superior Numbers - Fantastic Beasts and When to Find Them

Welcome to Superior Numbers, where I try to do numerical analysis on cards and deckbuilding trends using a little bit of math.

I'd like to talk about the power of the game and how it's changed over the years, specifically regarding creatures. In December of 2019, I took a look at the year of origin of the top 100 cards in the previous two years in EDH. You can find that article here if you didn't get a chance to read it, or want to revisit it. Probably the most relevant bit of data is the following chart, which seems to indicate a relatively even distribution of the most popular cards in the game: 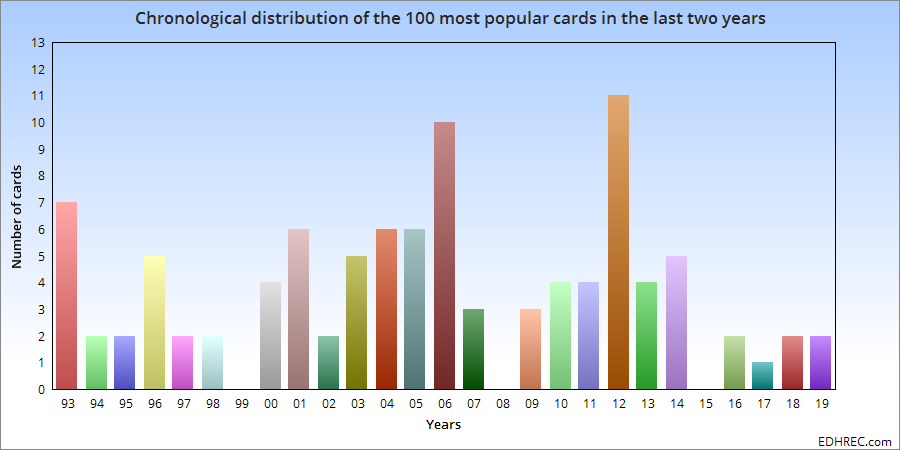 You'll note I said popular, not powerful. That's all we can really rank, after all. I don't think anyone would disagree that Brainstorm is a more powerful card than Opt, but the fact still remains that evaluating the two against each other is still at least a little bit subjective. There're decks and situations where Opt may regularly be more effective. Still, we go to war with the army we have, not the army we wish we had, and a measurement of popularity is the army we have at the moment.

Here's what this chart and my article last year didn't show, however; the breakdown of specific card types. Because while there may be a somewhat even distribution of the year of origin of the most popular cards, that doesn't mean there's an even distribution of them based on type. And what's the one card type that Magic players often point to when it comes to power creep? Creatures. That's not even a far past vs present discussion; it wasn't many years back that both Thragtusk and Siege Rhino terrorized Standard, and both would struggle today to compete with the strongest cardboard bodies in the game. Look at the impact of Baneslayer Angel on Standard when it was originally printed a decade ago vs the reprint last summer.

What the Hell Am I Doin' Here? I Don't Belong Here

WotC has specifically stated that they've tried to push creature power in recent years, in part because it was probably underpowered in early game iterations, and in part because they think it makes for more interesting gameplay. I don't have to look any further than my own decks to see that, at least for me, I heavily favor creatures from very recent sets: 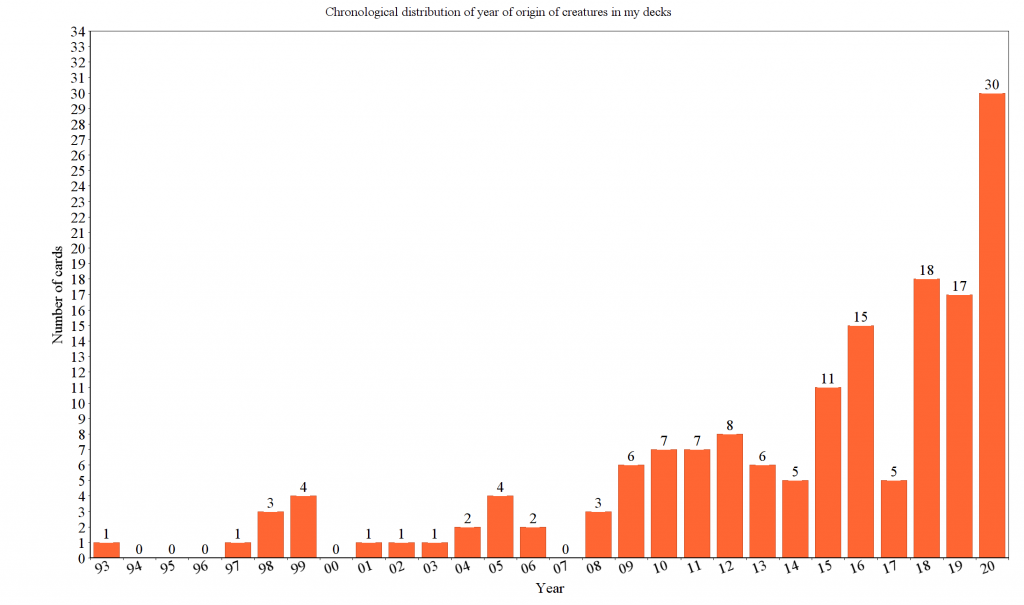 The numbers are skewed even further when you realize that a lot of the creatures populating the graph prior to 2001 or so are doing so because they're highly specialized and go into a niche decks. They aren't showing up in my lists because they're particularly powerful or effective outside that shell:

Essentially, if I didn't have a Pestilence deck or an Enchantress list, I'd have five cards from 2001 or earlier.

Now, there's a couple of things to note here. First, a lot more Magic sets come out in the average year today than did in 1996, and the sets tend to be larger. There's also a whole host of supplemental products that also offer more opportunities for creatures to find their way into decks. Recency bias is also a thing, where you want to run a new toy or test something that just got printed.

Still, there's not 30 times as many cards being released today as in 2001-2003, and while I playtest cards I then take out, that can't account for all of them. The reality is creatures are just getting stronger, and thus they're also likely getting more popular.

I Don't Care if it Hurts, I Wanna Have Control

Okay, so the fact that I personally like running newer creatures is all well and good, but does that play out when we look at people that aren't me? I do much prefer to talk about myself, but I guess we can look at the general population as a whole, or at least the general population whose decks are scraped by EDHREC. Thanks to Nate Burgess, who you can find on twitter @MisterPlorg, for pulling this bit of data for me and saving me the work of having to manually look up all 100 cards. 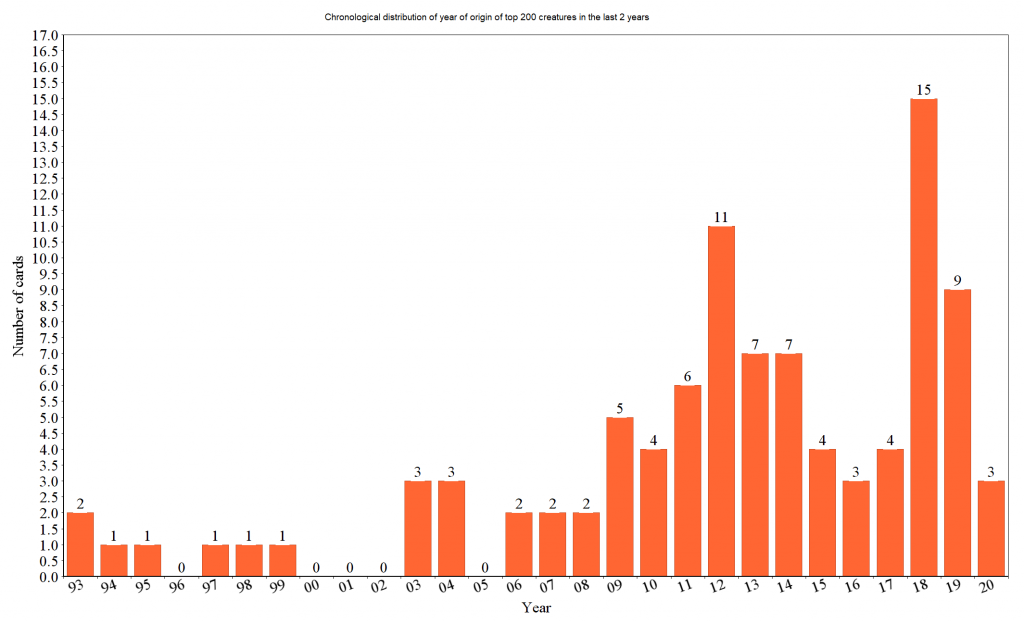 The contrast isn't quite as vivid as it is in my decks, but it's still rather large. I think the dip in 2020 stats is probably due to folks who aren't as diligent about updating their lists as soon as possible. I'd wager if we revisited this bit of data a year from now, we'd see 2020's statistics are a lot closer to 2018-2019 than they are to 2003-2004.

I Want You to Notice, When I'm Not Around

Okay, so what do we take away from all of this? Well, two things.

First, creatures today are more popular than creatures printed years ago. Does this mean that they're stronger? Probably, though there're other factors like price, availability, and obscurity that do hinder older cardboard. They also tend to do more things, which makes them more interesting deck inclusions. Shivan Dragon is an iconic card, particularly with the original Alpha art, but what it offers a deck pales in comparison to something like Goldspan Dragon. Goldspan is not only generally stronger, it works as a force multiplier in decks that care about Treasure, sacrificing things, artifact count, tokens, etc.

Second, given the graph at the very top of the page showing the overall distribution of card types, it probably means that we'd see an inverse skew for a lot of other types that result in us getting that fairly even graph. In other words if card representation is mostly even through the top 100, but creatures tend to lean heavily to recent sets, that must mean that some other card type is more popular from older sets. It's not a coincidence that there're no creatures in the Power 9 after all.

Whatever Makes You Happy, Whatever You Want

So let's wrap this up by learning something from what we've gathered and find a way to apply this. The primary lesson I'm taking away here is that creatures today are generally better than ones printed 4-5 years ago, and the ones then are generally better than the ones printed through the game's first 15 years. When new sets come out and you want to add a new body, the best place to look for cuts are going to usually be cutting older creatures.

Thanks for reading, and, as always, may your numbers be superior.