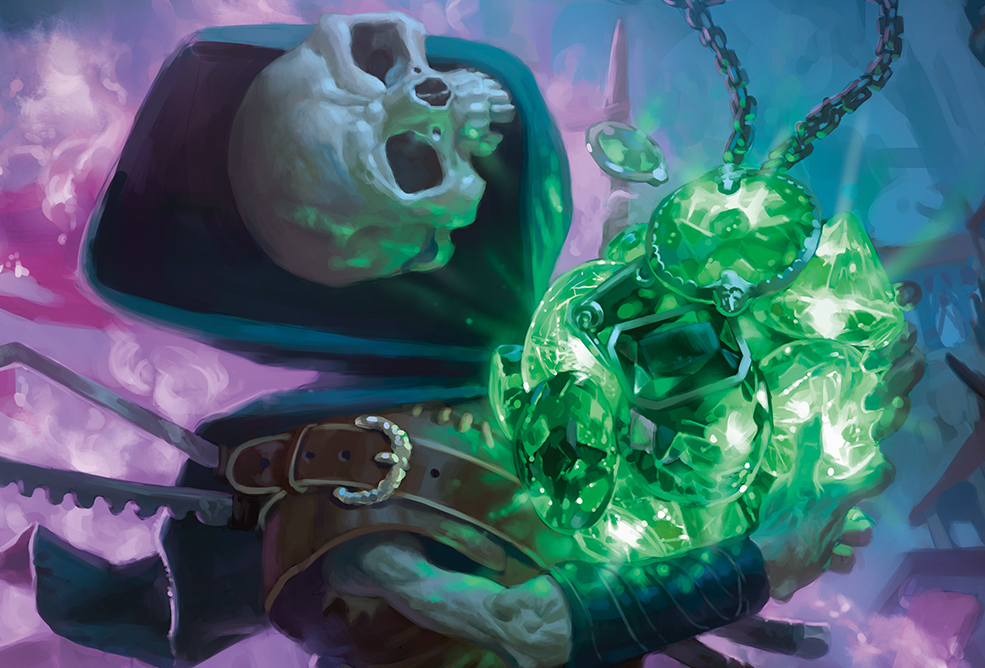 Jumping Right to the Core

After a slew of fresh prediction articles, we're back to the reviews, baby. Let's see how our predictions fared for Core Set 2021 and Jumpstart.

You're reading The 600, the article series dedicated to baseless speculation. As the name implies, our line is 600. For each new commander, we assign it an "Over" if we think it will lead more than 600 EDHREC decks after one year, and an "Under" if not. There's also one Can't-Miss Pick for each set, which is my opportunity to embarrass myself if I get it wrong.

It's been a year since I made my Core Set 2021 and Jumpstart predictions, so let's check my work. You can re-read last year's article, but no worries if you don't—I'll be referencing it throughout. Let's jump right in.

I like to start with the easy ones so it looks like I know what I'm doing. It doesn't get any easier than these three scrubs:

Ormos, Archive Keeper has some definite upside, as I mentioned last year.

"If you activate [Ormos's] ability with zero cards in your deck, for instance, he becomes a 30/30 flyer."

However, none of us are residents of Magical Christmas Land, as I subsequently pointed out.

"But if Ormos dies [when you have an empty library], don’t you die, too? And isn’t it really hard to get to zero cards? And if you’ve drawn your deck, aren’t you just going to win anyway?"

Ormos is basically like the L.A. Clippers: great on paper, but never in reality.

Then there's Barrin, Tolarian Archmage, who's probably a better teacher than a commander. Sure, he offers card draw, but you work too hard to get it. Yes, he affects the board, but only temporarily. As the numbers confirm, Barrin will go down as a niche commander at best.

Then there's Kaervek, the Spiteful, who never had a chance.

"There’s too much competition in mono-black these days, so I can’t imagine Kaervek earning 300 decks, let alone 600."

Even if this article series was renamed The 50, poor Kaervek wouldn't have made the cut. In fact, he was the least popular commander of either set.

Now for another round of duds.

"[Kels] is, after all, just a Dimir aristocrats commander, and I don’t think blue adds much to the strategy. You get counterspells and card draw, sure, but the former doesn’t support the gameplan and Kels already provides the latter."

The real question I should've been asking is this: Is "Kels" short for something? Kelly, perhaps, or Kelsey? Or maybe Kellogg's Frosted Flakes? We may never know.

Next up is Niambi, Esteemed Speaker, who could've given a novel strategy to Azorious.

"Many have called Niambi a legendary Deputy of Acquittals, though I think she’s more like a weird reanimator enabler."

Interestingly enough, we received some white reanimator tools from Modern Horizons 2, most notably Abiding Grace, Late to Dinner, and Scour the Desert. However, they arrived too late to reinforce poor Niambi, who finished well short of the mark.

Finally, we have Gadrak, the Crown-Scourge, who looked appealing but hit a hard ceiling.

"...It might be too tempting to include Gadrak in the 99 of other decks."

This proved true, since Gadrak leads only 111 decks, yet appears in about 40 times that many.

Our final three Easy Unders for these sets were...

To me, the biggest surprise here was the dedication of the Minotaur contingent. Here's my evaluation of Sethron, Hurloon General from last year, in its entirety:

"I’m glad the word 'hurl' is in this card’s name, because that’s exactly what I did when I saw it. Any card that encourages players to play the likes of Deathbellow Raider, Anaba Bodyguard, and Didgeridoo deserves an Under."

The Minotaur contingent took offense to this, which I find odd. Though shipping issues from the pandemic likely contributed to this set's overall poor performance, the fact remains: Minotaurs have basically no support in Magic right now, and neither Jumpstart nor M21 changed that. Sorry, Minotaur supporters.

Subira, Tulzidi Caravanner was an easy pick for one clear reason:

Jolrael, Mwonvuli Recluse was our final Easy Under. She introduced the "draw two" effect to mono-green, and though we would see this effect again months later in Kaldheim, it never seemed to hit. In fact, we've now seen this effect in all five colors, and it's been unpopular every time.

We'll start with the easiest:

This card could have a blank text box and probably still earn an Over. I think I summed it up pretty well last year:

"If we assume all humans are either cat people or dog people, Rin and Seri should appeal to all humans. I suppose some people are, I don’t know, wombat people, but even they can’t deny how adorable this pair is."

I never heard from the wombat people. However, the cat and dog people were loud enough, despite relatively slim pickings in both tribes. People play just about any stray animal in this deck, even draft chaff like Arcbound Mouser, Bayou Groff, and Arcbound Tracker. I guess players really love their pets.

This one was a little less easy, though still clear. Tinybones was basically the headliner of Jumpstart, after all. The only limiting factor was its price tag, which rose as high as $87 in mid-March.

Finally, did someone say "mill"?

My argument for Bruvac the Grandiloquent basically came down to "everybody loves mill." Not the most eloquent (grandiloquent?) stance, but it proved true—if only just barely.

Not every Under can be easy. That was certainly the case with these three:

My evaluation of Vito, Thorn of the Dusk Rose began and ended with a The Godfather reference, which is what you do when a card's named "Vito." Here's the salient gameplay analysis:

"[Lifegain is] already well-explored, and narrowing it to mono-black shouldn’t prove popular."

I was correct, but barely; three decks is about the closest margin I can remember having in these articles. I'm glad there weren't four more Mario Puzo fans out there.

Like the band Snow Patrol, our next commander has a surprisingly dedicated fanbase: Zurzoth, Chaos Rider. After I assigned Zurzoth an Under, many readers expressed their displeasure. Some even went so far as to make me wonder if they're Satanists New Jersey Devils fans. All I said was this:

"I’m never a fan of giving opponents free cards, even if they’re losing random ones in exchange. [Zurzoth] could work as a wheel commander, sure, but we got three of those from Commander 2020 and Ikoria, so I doubt this will make a splash."

Inniaz, the Gale Force was another close one, though less so than our last two. After having a year to think on it, I think this card's biggest issue is its divergent text; one half wants to attack with tiny flyers (an aggressive strategy), while the other wants to donate lousy permanents a la Zedruu the Greathearted (a slower strategy). This dichotomy bears out in the data. Most Inniaz decks run a straight blue-white flyers build, with the occasional Steel Golem or Grid Monitor to hose somebody.

That's enough of the successes. How about the failures?

Let's kick things off with my biggest disappointment.

Muxus is kinda like the Microsoft Zune of yore: a fine product, but always overshadowed by bigger, better competitors. In Muxus's case, that's Krenko, Mob Boss. I even acknowledged this problem last year, though I quickly brushed it aside:

"...I think Muxus’s whimsical art and board-altering effects will appeal to many players. Goblins are also EDHREC’s fifth most popular tribe (3,999 decks), meaning the market is by no means cornered. My love of Goblins might be clouding my vision, but I’ll bend the knee to Muxus any day."

Yup, vision clouded. I underestimated just how similar these two commanders are. The High-Synergy Cards, for example, are almost identical on both of these commanders' EDHREC pages. Add the short supply of Jumpstart product, and my boy Muxus fades into obscurity. For the record, I'm one of those 211 deckbuilders.

The reason for this Under is less obvious than that of Muxus. I mean, just check out this rave review:

"...Emiel’s versatility is remarkable. She supports blink, go-wide, and tribal synergies... She can even get infinite blinks from Brood Monitor or Workhorse... or infinite lifegain from Phyrexian Altar and Kitchen Finks."

All that is true, yet Emiel still underperformed, for some reason. It's not like there's a shortage of blink targets in Selesyna; Thragtusk, Avenger of Zendikar, and Hornet Queen are excellent options, just to name a few.

My theory is that the blink market was already cornered by the likes of Roon of the Hidden Realm, Brago, King Eternal, and Aminatou, the Fateshifter, leaving little room for newcomers like Emiel. Sure, it can support tribal and +1/+1 counters strategies, but it does neither well enough to earn widespread fame.

I might never forgive myself for this next one:

"[Mangara] is hands-down the best card-drawing commander mono-white has ever gotten. Also, he’s got tons of upvotes on Reddit, which has to count for something."

Nope. Turns out it doesn't.

Mangara's biggest problem is that he only does one thing. Like, if he submitted his resume to a Guild of Ravnica, it would be one line: "I'll draw lots of cards for you." Just look at the High-Synergy Cards listed on his commander page:

First red flag: there are usually way more High-Synergy Cards than this. Second red flag: none of them actually synergize all that well. Next time I'll take my own advice.

In hindsight, I truly can't believe I gave this an Under:

What was I thinking? Well, fortunately, I wrote it down.

"...Land decks in her colors are plentiful... Don’t get me wrong—I think Radha’s a powerful commander. I just think her archetype is already spoken for."

Sometimes this logic checks out, especially with crowded archetypes (the aforementioned Vito, Thorn of the Dusk Rose in lifegain, for instance). However, with commanders like Radha, Heart of Keld, the card proves different enough that players build it, anyway. That's a hard thing to identify with initial evaluations, but easier to see in hindsight. (Plus, the slew of Landfall support from the next set, Zendikar Rising, certainly didn't hurt.)

Last but not least, another whiff:

This one still surprises me, even a year later. Here's what I wrote back then:

"Xenagos, God of Revels has been the de-facto Gruul aggro commander for years. I don’t see Neyith changing that. Xenagos is harder to remove, doubles a creature’s power and toughness for free, and provides a stickier threat for just one additional mana. Sure, Neyith draws cards, but getting one card a turn isn’t enough to defeat the God of Revels."

In hindsight, I don't think this comparison was quite right. Neyith of the Dire Hunt plays out grindier than Xenagos, preferring to pick off threats and accumulate card advantage rather than bash with big boppers. As a result, Neyith became Jumpstart's second most popular commander (and #1 most popular dire wolf wrangler).

I even created this handy graph to show my historic performance: 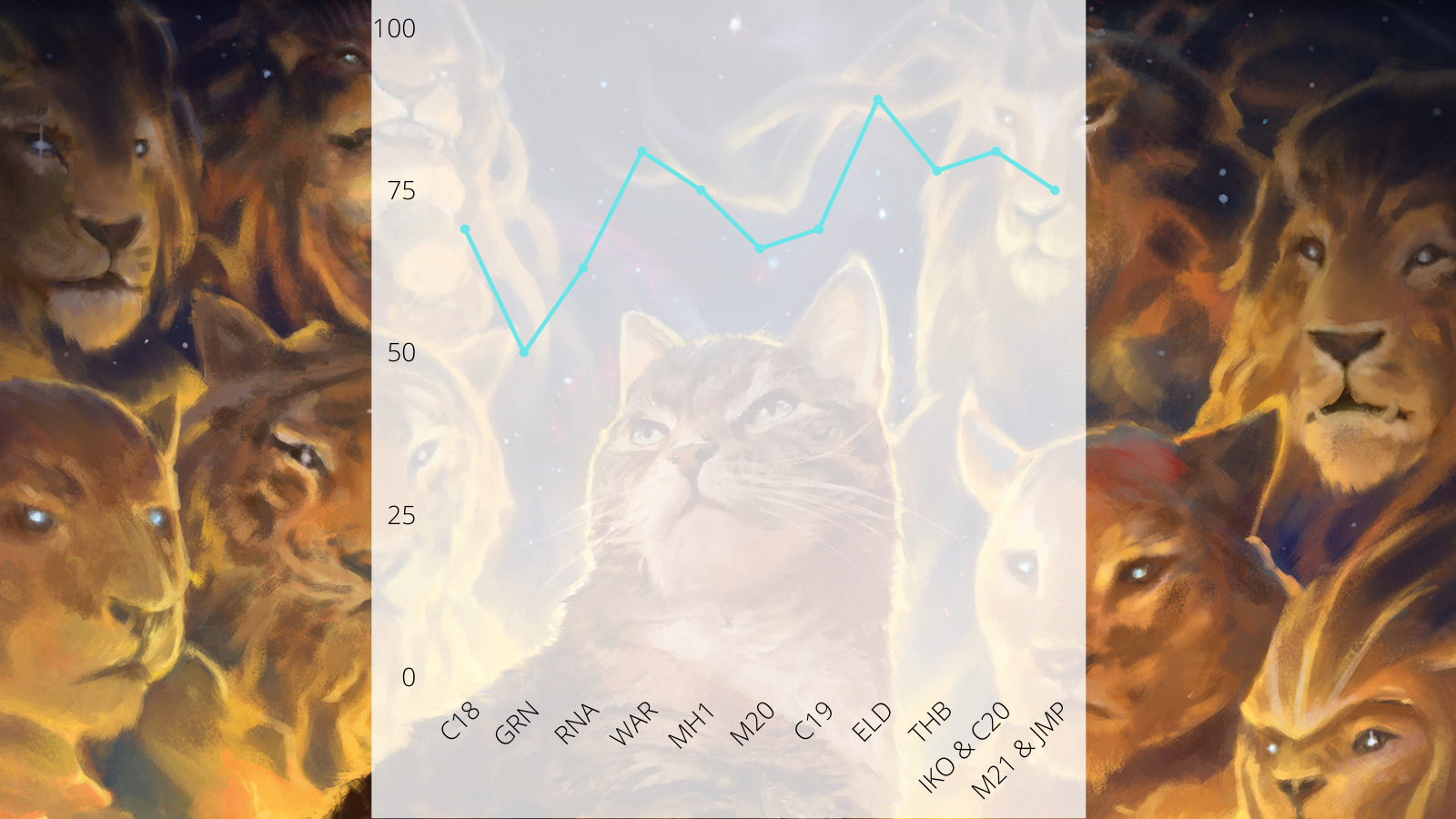 That's all for now. Until next time!