The 600 - Predicting the Popularity of Unfinity Commanders 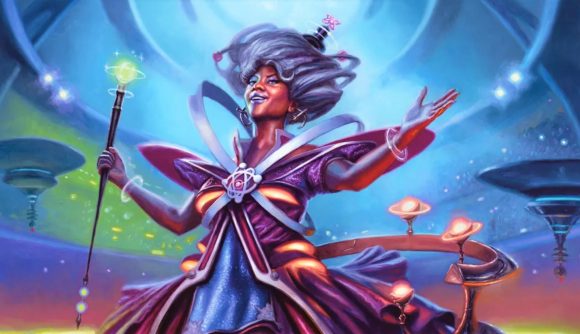 Unpredictable? We'll See About That!

Hello, and welcome back to The 600, the reputable and professional article series where we predict the popularity of the Spikiest new sets that are never silver-bordered. Our line is 600, so "Over" means I believe the commander in question will lead over 600 decks by next year, while "Under" means under 600. There's also a Can't-Miss Pick every set, which is my prime opportunity to bring shame down upon my family if I get it wrong.

Now that we've gotten the setup out of the way, let's get to the punchlines. Here come our picks for Unfinity!

I don't know who or what "Myra's Marvels" is, but I do know one thing: this card will appeal to cat owners. It should also appeal to the same people who go on r/EDH and ask for feedback on their fork tribal decks, because this is a really odd build-around condition.

The joke here is changing those first letters using Unfinity's sticker cards. The challenge is actually comprehending how the sticker mechanic works (for the record, I haven't). Despite being a Partner and looking like a Powderpuff Girl in its Showcase artwork, I'm going to opt for the "no" sticker.

I shudder to think how Simon Cowell might've reacted to this contestant. Nonetheless, I kind of like Solaflora. White has no shortage of Auras, Equipment, and counters, along with creature tokens to take advantage of the bonuses. Again, I think the stickers will rarely matter, but the rest should be enough for 600 deckbuilders.

This card seems tough to build around. On one hand, the higher the number you choose, the bigger your payoff, yet if you choose something like seven or eight, you're likely to have too many high mana costs in your deck. Therefore, you probably want creatures with above-the-curve stats, such as defenders with abnormally large butts.

But then what are you doing? Animating Vehicles? This card just feels too finicky—and it's not even particularly funny.

PSA: Rules text is basically anything in the box that isn't flavor or reminder text. A few suggestions:

There are actually quite a few words that fit the bill. Nonetheless, this seems like a fairly arbitrary build-around condition, so I'm doubtful players will go for it.

Look, I know cards are wordy these days, but even the wordiest don't require a demonstration. I'm out on this one.

It would've been especially impressive if the artist could've fit all 10 items on this card, but that's neither here nor there. The payoff for casting such spells is legit, since we've seen the value of Treasures set after set, yet still, like Nocturno, I find it hard to believe 600 players will find this random build-around condition appealing.

We've gone 0-4 on the Myra's Marvels cycle thus far. Can Hardy save us?

Definitely maybe. I think two is your magic number, since two free counters per creature is both impactful and realistic. I doubt you could find enough creatures with three+ lines of flavor text unless they were vanilla (I doubt many players will choose to do that). Plus, there's a long history of famous Hardys, including Tom, Thomas, and George, so that's got to count for something.

Jermane, Pride of the Circus

The artwork gives an excellent hint regarding Jermane's tribe of choice: Spiders. They have more than four legs by definition, and many have deathtouch, making the second ability extra potent. Of course, there are plenty more tribes that fit the bill, including Cats, Wolves, and Beasts. (Lions, Tigers, and Bears also work, but I was trying to avoid that joke.)

Look, I've already made one American Idol wisecrack, and I can't make another. Fortunately, this card is lousy enough that I won't have to. Consider this guy unheralded.

This is a sweet design. Claire decks will love cards that create duplicate tokens, such as Rite of Replication, plus cards that retrieve them when they die, such as Sun Titan (or Claire herself). You can also accumulate tons of Treasures and Clues, sac them, then bring them all back with something like Triumphant Reckoning. You might even use Paradoxical Outcome to draw a bunch of cards, then replay all your tokens for free, since I believe non-copy tokens have a mana cost of zero. (*Raises hand to ask a Judge*) Easy pick here.

Dee Kay, Finder of the Lost

A general note on the Attraction mechanic: I don't think players will flock to it unless the payoffs are immense. They certainly aren't for Dee Kay here, who offers three minor upsides, none of which are reliable. This one can stay in the lost and found.

I like the flavor on this card. When someone dies on Truss's ride, he gets a little smarter. Then, on subsequent turns, he puts that knowledge to better use by adding or subtracting numbers from stuff.

I mean, I think that's upside? You can't kill creatures with it, nor can you cast stuff for free or do anything broken. Seems like a fun design space to explore, but too limited to be worthwhile.

Magar of the Magic Strings

Puppeteers and their puppets try to be funny, but they're usually just creepy. Magar, however, has caught my attention. You'll want to discard impactful yet expensive spells into your graveyard with cards like Faithless Looting, then turn them into puppets and try to sneak them in for combat damage. A difficult task, but not impossible with red and black's plentiful targeted removal to slay blockers.

The joke here is that rolling a five or six gives Monoxa all three abilities. Decent, but less so on a 3/3 body. Plus, rolling multiples does nothing for you. I'd rather play Yahtzee—and I don't even like Yahtzee.

My dad once tried to force me to take a picture with a Marilyn Monroe impersonator at Universal Studios. Being a nervous and embarrassed teenager at the time, I refused. My dad was gravely disappointed.

I suspect the meeting depicted on this card is going similarly. "Sisay" requires some strange mix of cards with plentiful flavor text and exotic expansion symbols. The latter should be easy enough considering the avalanche of releases these days, but the former seems underwhelming.

This pun was almost certainly MaRo's doing. I don't know who's responsible for the rest of the card, but I'm not enthused. A four-mana 1/1 is something they'd print in Homelands, and rolling as many dice as this family requires seems unrealistic at best (refer back to my feelings on Yahtzee).

Lila seems to be showing Caillou around the circus, suggesting the upcoming Universes Beyond: Caillou Commander card will be printed at common. Bringing a Pauper build-around to EDH is a fun gimmick, especially considering how many options that gives you: 3,527, by my count.

Granted, this is sort of like the menu at Cheesecake Factory, in that there are tons of options, yet none are especially good. Even so, I think players will find their favorites. You could build a classic Pauper Bogles deck, for example (minus the titular Slippery Bogle), or a common-based combo deck built around Midnight Guard and Presence of Gond. When you're essentially playing with an extra card in your hand every turn, the possibilities are endless.

I appreciate the inter-species camaraderie, but there's no way 600 players will bother with ability stickers.

If menace ever becomes a drawback for some reason, Barone lets you remove it at instant speed by removing your hat. Good tech there. What's more, there's a surprising surplus of relevant creatures wearing hats, including Adeline, Resplendent Cathar, Angel of Invention, and Captain of the Watch.

Still, I remain skeptical of these arbitrary build-arounds. They're funny in theory and I'm sure they'll pick up some decks. But 600? That's a lot of hats.

This is clearly busted with all manner of cards, including Mother of Runes, Angel's Grace, and Yawgmoth's Will. It's most obnoxious with Silence, and for that reason I'm seriously wondering if this card will get banned. Certainly powerful, but I'm thinking it's a little too powerful.

Myra requires a heck of a lot of tracking, but the payoff is magnificent. You could easily set up multiple attractions, then add efficient yet impactful spells to each, such as Jeska's Will or Preordain. Myra simply offers too much value to ignore.

My prediction: Over (Can't-Miss Pick!)

Roxi, Publicist to the Stars

Stickers belong on freshman-year laptops, not on Magic cards.

Another Attraction build-around, though this one's not nearly as attractive as Myra. I'd play it in my Jermane, Pride of the Circus deck if it was mono-green, but otherwise, I'm out.

The Most Dangerous Gamer

Now this is an Attraction payoff. I'm sure this guy makes the staff at the circus nervous, but EDH players will love him. The Most Dangerous Gamer gets bigger each turn, adds more and more value to the board, and sometimes snipes opposing permanents. What more can you ask from your commander? (Just don't ask for his ID. I don't think that will go well.)

Lots of text to parse, but once you get what's going on, Rex is pretty cool. I think it's best with cost-reducing mechanics, like Convoke and Affinity, since their power/toughness as a Vehicle will be far greater than the cost paid to cast them. Plus, Rex can personally Crew any Vehicle he creates. Move over, Tom Hanks. Rex is the captain now.

I'm a dad, so trust me when I say Pietra will be responsible for way too many dad jokes. Therefore, I'm giving it an Under, mostly as a preventative measure.

Everyone knows you never get anything good at the prize wall unless you've got approximately 6,000 tickets. Three is a start, but unless you plan for your game to go several thousand more turns (some EDH players would love this), I'd suggest avoiding it.

It Came from Planet Glurg

I'm unsure exactly what players will do with this card, but I'm sure it will be degenerate. X = 2 is the minimum threshold for fun, and it only gets better from there. Imagine combining your opponent's Grave Titan with your Invisible Stalker, for instance. Wherever Planet Glurg is, I'd like to visit.

If you've been reading this series for a while, you've probably noticed that five-color commanders never, ever go Under. I'm not exaggerating: I've written these articles for four years and I've never seen it. For that reason, it's tough to pick against Vorthos—not that I was going to.

This card seems absolutely broken. If you pick a classic MTG character (Liliana, Teferi, and Urza come to mind), you may very well construct a deck that casts most (or all) of its spells at a significant discount (or for free). Sounds powerful to me.

If you like Drawful, you'll love this card. Problem is, colorless commanders are painful to build around, since they require only colorless cards and lots of Wastes. Sadly, the payoff here isn't worth the pain.

Will these picks end up being unparalleled or unbearable? You'll just have to return next year to find out. Until then, thanks for reading!