The Chopping Block — Vorel of the Hull Clade 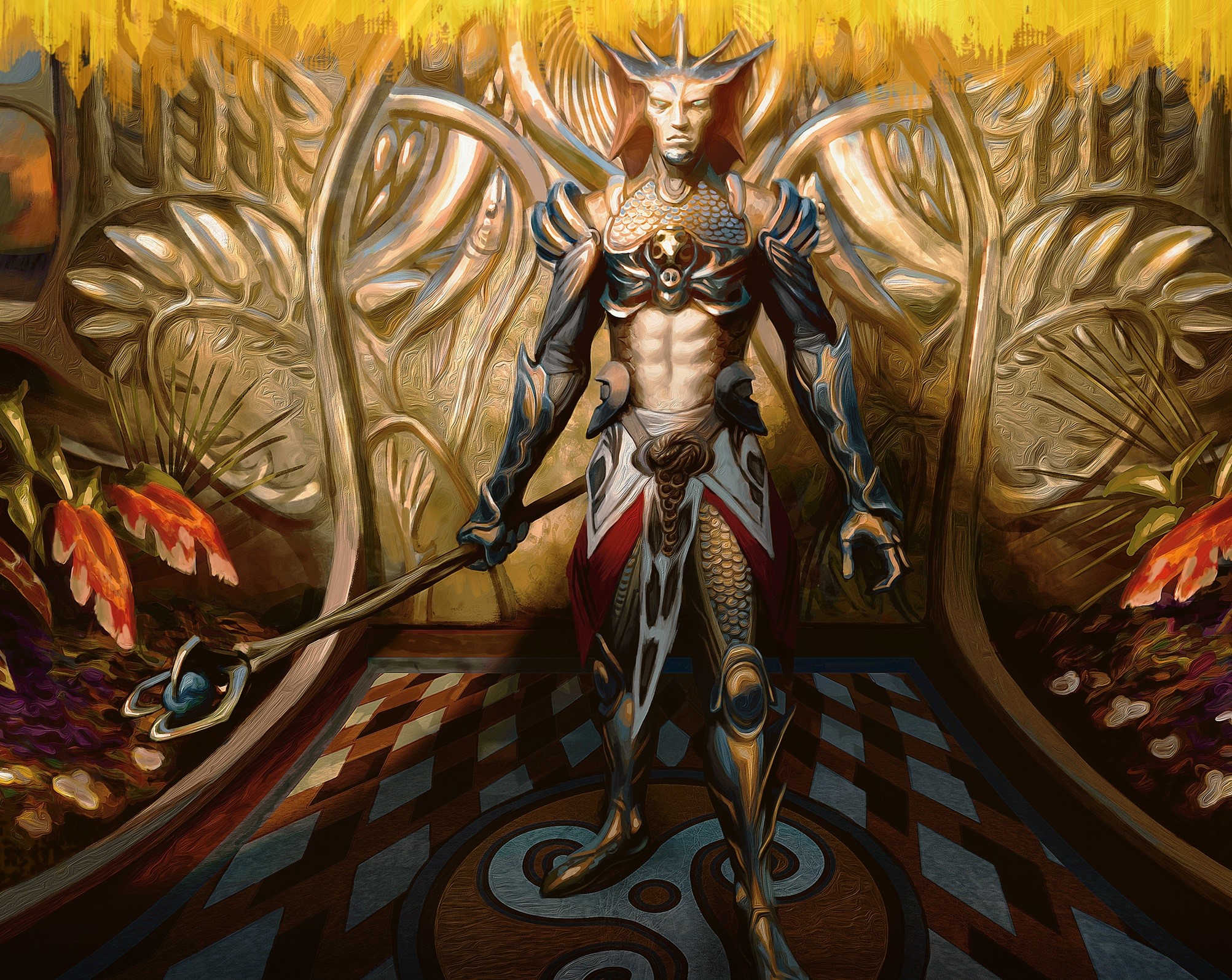 Hello ladies and gentlemen, and welcome to the first article in The Chopping Block. My name is Josh Coleman, and I’m here to bring you some Commander insight. I’m an avid Commander player with over a decade of experience in the format. From my first red-white cool-art deck, to my turn-two-win Teferi, Temporal Archmage deck, I’ve seen or played just about anything a person can imagine. Taking a deck and building it into something different or never done before is a hobby of mine. Making these decks so they fit into whatever meta I play in is the difficult part. I travel a lot for work and get to play with new groups often. One of my favorite parts of Magic is that when a player changes play groups, the decks they have can go from great to terrible. It challenges a player to rethink their deck and build it into something better. The meta often decides what a player can or should design. This series helps pass that knowledge on; so that when a player builds their newest deck, they can bring something not only powerful but also flavorful and unique to the table. It’s easy to search for a list for any Commander and build right from that. However, many Commanders can fit into more than just one role. My goal will be to split each deck we talk about into several, focused decks, instead of one all-around deck. Today, we welcome Vorel of the Hull Clade to the chopping block!

Vorel of the Hull Clade

Vorel has a very basic idea in mind. Play things with counters and double those counters as much as possible. Only costing 1UG, he usually comes down as soon as turn two or three, and is never a big deal to cast late game. His activated ability only costs a UG and tap, which means we will abuse this by untapping Vorel.

The following is the average deck list for Vorel from EDHREC. It provides the grounds to build an extremely consistent threat with +1/+1 counters and a few artifacts that can be easily abused with charge counters. The majority of the creatures either deal with +1/+1 counters directly, or untap the creatures that increase counters. This list lies somewhere between mid-range aggro and combo. This leaves multiple win-conditions open throughout the game. Darksteel Reactor may look like a jank (worthless) rare, but in Vorel it’s an easy four-turn clock thanks to the doubling ability of our commander. I am going to tear this list apart and build it into three decks with a singular focus. We’ve got Elf Tribal, Super Friends, and Stax decks this week! This is our most straightforward deck. Don’t let the simple theme obscure the great synergy. Vorel, while not an elf, loves to see elves in his deck. Three of Vorel’s signature cards are elves.

These cards are a great start to any elf deck. The main changes to deck are the addition of nearly twenty more creatures. Many elves have been printed throughout the history of Magic with abilities that interact with +1/+1 counters. The goal is to power out as many elves onto the field as fast as possible, while also using elves that grant counters as creatures are played. The main creatures you want are Gyre Sage, Rishkar, Peema Renegade, Ivy Lane Denizen, Master Biomancer, Immaculate Magistrate, and Gladehart Cavalry. These creatures ensure that a player always has the biggest creatures on the table and apply a consistent threat to everyone. Elves provide more than just big bodies, though. They also allow a sheer number of creatures to flood the board. This allows players to go wide and tall at the same time. Many elves are also utility creatures. This allows players to build their boards while controlling the table. This deck runs twenty-three creatures with three or less converted mana cost. The low cost allows multiple creatures to be cast each turn. Primordial Sage, Soul of the Harvest, Zendikar Resurgent, and Regal Force will net around five to eight cards anytime one is in play. Feel free to add in Aluren and Cloudstone Curio to take the deck into a more combo-centric build. This card advantage is the primary protection from board wipes. Opponents can wipe the board, but one turn later, we can play out four creatures and still have six cards in hand. Between the consistently large threat and enormous card draw, this allows the deck to maintain control. Green Sun's Zenith or Chord of Calling can also be played; however, with the amount of card draw already included in the list they were left out. Adding in either will allow a finisher like Craterhoof Behemoth to be added. The combo here lies in Mycosynth Lattice, Liquimetal Coating to a lesser extent, and Vorel. Mycosynth Lattice turns planeswalkers, along with everything else, into artifacts and Vorel can double their loyalty counters during each turn. Typically, this means you are able to use a planeswalker’s “ultimate” ability during the turn it enters the battlefield. This package of walkers is good at controlling the board and providing card advantage. This allows playing your planeswalkers even when the combo pieces aren't in place. I included nine different ways to tutor either Lattice or Coating. The deck uses cheap mana dorks to excel into Lattice as soon as possible. Once Lattice is down, Vorel and any planeswalker can be dropped for an instant ultimate. Doubling the loyalty on walkers also serves as protection. Once you double the counters two or three times, most walkers are sitting at fifteen or more counters. Many players will leave the walkers alone with that many counters. I’ve also included many of the signature cards from the original EDHREC deck:

You can make room in the list by removing almost everything that deals with +1/+1 counters from the average deck list. Building on a theme that requires at least three cards on the field to succeed requires focusing on getting combo pieces more than keeping alternate-win conditions open. There are also quite a few spells to return all creatures to their owner’s hand. This deck won’t have a large investment in creatures and should be able to afford bouncing all creatures often.

Bonus: They aren't in this list, as I have friends I wish to keep, but if March of the Machines or Karn, Silver Golem are included, they combo with Lattice to destroy lands. There is a lot of creature and artifact mana; therefore, losing lands will not affect the mana base. Parallax Tide and Mind Unbound can also be doubled for more fun with this combo. This list's goal is to lock down all our opponents’ creatures and mana in a way that only Vorel can. Tangle Wire shines when accompanied by Vorel. Tapping four creatures, artifacts, or lands each turn is barely noticeable. Once Wire's fade counters are doubled a couple of times, tapping 16+ different things each turn, that gets the attention of everyone at the table. The best part is, since it is cheap to cast, this can be accomplished in almost one turn. At three colorless mana to play, and just UG to double, eight things are being tapped without the help of anything that untaps Vorel. However, those counters need to be doubled as much as possible, so I've packed in three more untap effects, along with Gilder Bairn (best art in the whole deck). Beware, because opponents still get an untap phase and can then cast instants through Wire. There are two solutions to this problem. The first is Static Orb. It allows players to only untap two permanents each turn, which then become tapped again due to Wire. The second is Teferi, Mage of Zhalfir. Teferi shuts down their ability to cast at instant speed, and thus makes the board mostly a hard lock. With only two stax cards in the deck, there have to be ways to search for them. There are four tutors to find the lock pieces in this deck. This deck is only using a few of the stax lock pieces. Adding in Winter Orb, Back to Basics, Rising Waters, Smokestack, and/or Mana Vortex will build a more competitive deck.

Now the question becomes; “What can a player do to win the game?” Most of the win conditions actually come right from the EDHREC list!

I removed many of the stax effects to make the list a little friendlier. I replaced them with charge counter synergy. Magistrate's Scepter is almost good enough to run without the charge counter effects, but with them it powers this deck to infinite turns easily. A Coretapper can add three counters (tapping core tapper and sacrificing it) to the scepter in one turn. If Vorel is active, it can double the three counters to six. This leaves three counters after taking another turn, which can then be doubled on the next turn. Once infinite turns have been achieved you can allow Tangle Wire to fade away. This all costs only five mana to do. When Vorel is unavailable, the combined power of Coretapper, Energy Chamber, and Vedalken Infuser still add up to three counters in a single turn. Since there are cards that add charge counters already included in this deck, here are some more cards that synergize well.

Getting 30 or more counters on Otherworld Atlas will force each player to draw out their respective decks. Laboratory Maniac has been included to give an additional win condition. Otherworld Atlas can also be used to draw combo pieces in lieu of tutors. Part the Waterveil
This card has made it into each of the lists here, but it hasn’t worked its way into the average list. It doesn’t necessarily go with all the themes in each deck; however, this card and Vorel can knock a player out of the game almost instantly. When this is cast with awaken, it puts six +1/+1 counters on a land. If those counters are doubled that turn it brings the land to be a 12/12. When Waterveil is cast, the land can attack on the same turn for 12 damage. On the extra turn, the counters on the land can be doubled once more to a 24/24 and swing in for a total of 36 damage! This all happens in one turn (two technically), and is nearly lethal without any help from other cards. To use this trick to the fullest, wait until one opponent has no blockers and go in for the kill. After one player has been eliminated, the land is still a 24/24 that can be doubled on your next turn for 48 damage. For this reason, it has been included in each deck as Super Secret Tech.

I managed to squeeze the average Vorel deck into three tight builds that feel like entirely different decks in this article. Making simple adjustments to the EDHREC average list allows new and complex decks. I had a chance to pilot each of these personally and just love the moment when everyone else realizes we’re not just doubling +1/+1 counters on our creatures, but carefully aiming our entire deck into a powerful win. This doesn’t mean these are the only decks that fit this commander, but hopefully you’ve been inspired by some of the interactions mentioned here and you can form your own version of Vorel. If you have a unique Vorel deck share it in the comments. I'd love to look it over. Look out for the next article in the series and thanks for reading The Chopping Block!

Josh Coleman is project manager within the legalized gaming industry. He spends the majority of his free time brewing and playing commander. He also loves eating Chicago style pizza while playing a dual wield Rogue (there is no other type). You can catch him on Magic Online under the name Amumu or at Jcoleman@thesolring.com.