The Enchantress Queen with 100% Angus Beef

One of my favorite archetypes that Magic: the Gathering had to offer was enchantment tribal. As a player for three years and counting, the Theros and Urza blocks introduced me to magic in a way that I fell in love with enchantments. Sure, there are tons of aura strategies to work with Bruna, Light of Alabaster and Zur the Enchanter, but I wanted to focus more on a world enchantment approach. World enchantments are permanents that, unlike auras, stay on the battlefield and basically tell people how to play the game. Whether it's to mess with peoples' minds like Possibility Storm or to tax the crap out of players like Rhystic Study, world enchantments sit there staring you in the face and tell you and others what to do. If you think about it, Planechase might as well be called, "World Enchantments: The Game."

We Have the Meats!

Most people like to build around enchantment pillow fort strategies, which is not a bad idea, considering people are reluctant to pay to attack you every time. Angus Mackenzie makes the pillow fort approach possible without the commander having anything to do with enchantments. It is both a barrier and an ally maker, depending how one chooses to play it. Combined with world enchantments, it is hard to get through. With the cheeky board state chaos that Enchanted Evening can cause, it makes pillow fort entertaining to play. I personally don't go for a huge lock-down. I like interactions with all players...as long as they don't attack me. However, interactions only last long until Opalescence hits the field, partnering up with Enchanted Evening. Oops, my mana slipped. I just played Armageddon without actually casting Armageddon. Krosan Grip the Aura Thief while Enchanted Evening is on board and you got gifts from your opponents as you giggle like a kid on Christmas morning. 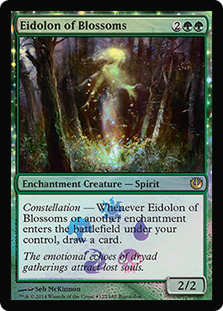 Even though Angus is a great commander for the strategy, it's kind of a bummer for me because as a world enchantment tribal player, I want more synergy. Synergy is what I crave in a deck, and if there are possibilities out there that can work, I seek them. Drawing cards is my favorite thing in Magic, but I also love to do so when I run with a color base of green and white. Green and white are the two perfect base colors for enchantments. I think that's why I always felt Zur was not the choice for me since it only has the white base. My equal love for green shall prevail. Cards that allow me to draw off enchantments can ultimately make me storm off with Omniscience. I've almost decked myself a couple times and friends tell me to put in Laboratory Maniac. I'll leave that up to people who are interested in this build to decide for themselves.

From Brags to Riches

One time, I went to a game store that had a good crowd to surprise. Angus Mackenzie did his thing, throwing everyone off, making the players assume my deck was all fog. They were really sweet, and I really liked their decks...REALLY liked their decks. It was a shame I took their Karn Liberated and shiny expedition lands with that Aura Thief combo. Why am I like this? The look on their faces was priceless as they had never seen anything like that happen before. The deck's main combos with Enchanted Evening are not common, but one can appreciate the rarity. Researching all the different world enchantments was really fun and I still find new and exciting additions to change up my style. I've had this deck for almost 3 years now and been constantly changing it. 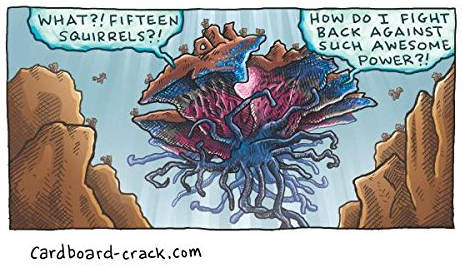 Things are About to Get Nuts

I usually do not like infinite combos, but I have one as an alternative win condition. Squirrel Nest and Earthcraft are not the duo I usually tutor for, but they are in the deck in case Enchanted Evening gets the boot. Infinite mana for Helix Pinnacle is a cheesy win, I'll admit, but it's not everything. Is it a power trip? Eh, sometimes. I love the fact I can choose not to search up the combo but knowing it's in the deck keeps me in check. But that mana though... Do I look like a target? Yes, yes I do. Look at my Sphere of Safety and Moat just sitting there. I have no reason to fog every turn. This isn't a fog deck. That's another thing I love about Angus: it is there to throw new opponents off. Opponents have the look of saying, "what intriguing secrets do you hold inside your deck. I must find out!" I just keep building walls around my insecurities until someone comes along and cares enough to knock it down. Walls are not just to keep people out, but to keep my insanity in.

Budget Alternatives to Save Your Bank

In order to obtain similar effectiveness of the deck without spending an arm and a leg, here are some good alternatives for the deck:

I hope this article was helpful to those who want to build something uncommon in the commander atmosphere. Whether this article helps to create new interactions or lack thereof, it is important to know your venue(s) and how to play around people. Keep in mind that this deck has drawn some hate, but it is always good to bring a spare deck.

Kaylyn is a graduate of Eastern Kentucky University with a Bachelor's Degree in English. Alongside working in retail, this meme trash fanatic loves to play competitive Overwatch and EDH occasionally. Kaylyn also fancies managing her magic inventory using EDHREC and MTGStocks prices.