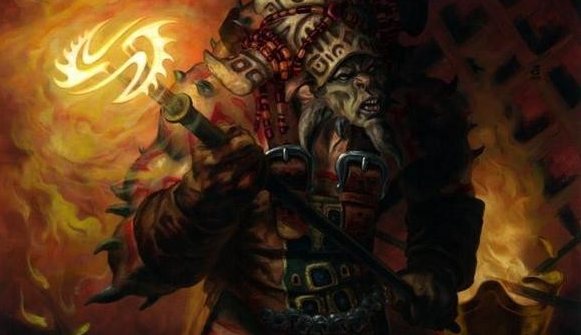 …But When I Do, It’s With This Ogre

Hello everybody, and welcome back to The Toolbox! If you’re new to the series, our goal is to take a look at underplayed cards and find their best homes! In the past, we’ve looked at an instant and a couple artifacts but today we’re going to look at a creature! Yes, an actual creature, those things that typically hit people and make you win games of Magic, like Griselbrand or Emrakul, the Aeons Torn.

Oh wait, those aren’t legal in Commander. Let’s go with the friendly ramp creatures, Rofellos, Llanowar Emissary and Primeval Titan then! Just a couple of ramp creatures… wait they’re also banned? Well, crap. Let’s find another mana maker then. How about Treasonous Ogre? Good enough. Let’s get to it!

Time to Commit Some Treason

Not literally. If you take one thing from this article, it should be the message of ‘don’t commit actual, literal treason.’ And also that you should be playing Treasonous Ogre, but mainly the whole treason thing. Anyways, why do people play mana dorks? They play them to get a creature on board while accelerating their mana. Typically they’re one- to two-mana creatures, such as Birds of Paradise and and [card]Sylvan Caryatid. However, there are some more expensive dorks that rise above the rest, such as Karametra’s Acolyte and Metalworker.

What makes these mana dorks so good? Naturally, their ability to make an immense amount of mana at a pretty aggressive cost. Their low power and toughness become irrelevant pretty quickly compared to the mana output and the advantage that provides you.

Treasonous Ogre is in that same boat. A 2/3 for four mana isn’t great, though I suppose the Dethrone means he can get in there and do some damage when needed. However, what really makes this Ogre so strong is that there is no requirement to tap him or number restriction on how much mana he can produce! 3 life for one red mana, straight across, which means we can make some explosive plays.

Looking at the most popular commanders for Treasonous Ogre we find Marchesa, the Black Rose, Heartless Hidetsugu, Firesong and Sunspeaker, and Ruric Thar. Among these potential strategies, our Ogre friend gives us some ramp, some potential to abuse his ability by pairing it with lifegain, ways to abuse Dethrone, and some decks that go outright pedal-to-the-metal

What other places can we find for our Ogre buddy? This is gonna be a fun one! You guys know the drill, so let’s get to it!

That’s right, we’re starting a little halfhearted with Ib Halfheart, Goblin Tactician. Kind of ironic, since he is really conducive to sacrificing your own lands, but that’s exactly what we want. I love Ib Halfheart with my whole heart. He’s so cool, and so out of the box for red. (Also, Wayne Reynolds, I love the art on this guy!)

Ib Halfheart changes combat by turning our blocked Goblins into powder kegs, sacrificing themselves to deal four damage to the creature that dared to stand in their way. This can be good, especially with a bunch of tokens, but it can be a bit of a drawback at times. Luckily, Ib Halfheart also gives us more Goblin grenadiers by sacrificing two mountains. If you sacrifice all your lands to make creatures, you need to create mana somehow, so why not with Treasonous Ogre? Just think, you’re already sacrificing virtually all of your lands so why not go all the way and pay life for your mana? Other cards Ogre synergizes with include literally any spell in the deck because you’ll need to cast things. Alternatively, you can just use it to really play your hand out without sacrificing any lands to get enough board presence to win. It’s foolproof! Unless our opponents play basically anyway to deal direct damage to us or a Wrath of God to destroy our board! Still, that’s not why we’re playing this kind of deck, so it doesn’t really matter! Ib Halfheart goes all in, and Ogre helps him along.

You probably didn’t guess it, but Wort, the Raidmother is next on the docket, and I cannot tell you how excited I am to talk about this bizarre Gruul commander! She’s a 3/3 for six mana, which is pretty bad, but when she enters the battlefield, she brings two 1/1 red-green Goblins with her. Wait, that’s still not great. At that rate I’d rather have Siege-Gang Commander. Wait again, she also gives all our red and green instant and sorceries Conspire? This lends itself pretty well to spellslinging and Storm decks, but in a very unique way! The challenge with Wort, the Raidmother is that, unlike most red-green commanders she wants creatures and spells, not just creatures, like Xenagos the Reveler or Thromok, the Insatiable. Treasonous Ogre is a creature, so we can already tap him for Conspire, but what’s the one other thing that a Storm deck needs?

Mana. All the mana. Like, every bit of mana it can scrounge up. If you’re racking up your Storm count, you really don’t care about your life total anyway, so that three life per mana is pretty irrelevant. This is also a pretty weird way to build Storm, as it uses cards like Craterhoof Behemoth in tandem with payoffs like Empty the Warrens.

To make Treasonous Ogre a little stronger, you could also consider running Aetherflux Reservoir. This would add some redundancy to the win conditions and make the life loss even more irrelevant. Ogre also enables us to get to the six mana threshold of casting Wort just a little bit earlier as well as other spells in the same turn. So here’s the decklist!

That’s right, I’m talking about the underplayed Bruse Tarl, Boorish Herder. This is one really interesting support partner. Whenever he enters the battlefield or attacks, he gives a target creature double strike and lifelink. This is pretty good, but not amazing, considering the other partners like Vial Smasher the Fierce. Which, conveniently, is exactly who I’ll partner with Bruse. In tandem, being able to give Vial Smasher lifelink and gain a bunch of life when we cast a giant spell is pretty spicy. Dang, I need to go do some brewing. As usual, this series is going to be the death of my wallet. Why should we run Treasonous Ogre? Well, Vial Smasher the Fierce wants us to cast big spells, so the Ogre gives us that extra boost for bigger spells. Plus, Bruse Tarl, Boorish Herder helps us gain any life back that we had to pay to cast our big spells, such as Gisela, Blade of Goldnight or Inferno Titan! The only thing left to do is see what other crazy stuff we can do with the decklist!

As the title of this section implies, a lot of people really hate this commander. Numot, the Devastator can be a pain to play against. Honestly, land destruction doesn’t really bother me, I just view it as another way to restrict your opponents’ resources, similar to discard effects like Neheb, the Worthy. Though I know it can be a touchy subject for most, the single goal of this deck is to attrition our opponents out by destroying their lands as many times as needed. A 6/6 flyer for six mana that can eat lands whenever it hits someone is pretty effective. However, the main time Numot’s ability comes in handy is after an Armageddon. If we’ve destroyed lands, and it costs three mana to destroy any future lands our enemies play, how will we effectively keep our opponents from acquiring the resources to cast spells? Treasonous Ogre has you covered! He can boost our mana quickly so that we can cast our spells and really constrict our opponents. Consider also adding something like Loxodon Warhammer to speed up the clock with Numot and to gain back some of the life we’ve payed to Treasonous Ogre. Let’s get right to the decklist!

This is Not the End

Thank you everybody so much for reading! It really means a lot to hear from you all and thank you so much for sharing your thoughts in the comments. Let me know what decks you think Treasonous Ogre should appear in, and what future cards you’d like to see on The Toolbox! Thank you all once again, and have a great holiday!