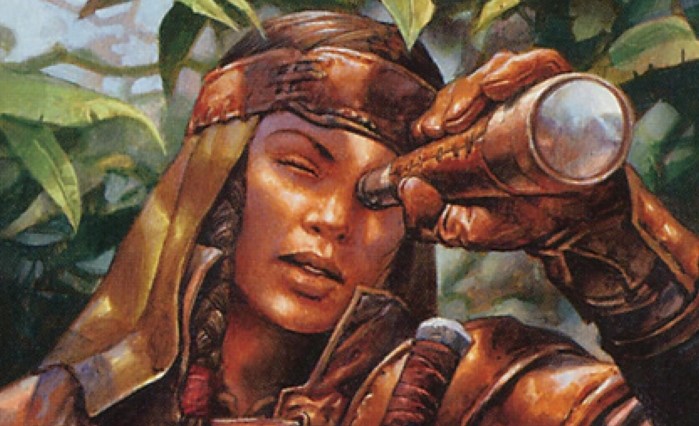 Welcome back to The Toolbox! Here, we take a look at underplayed cards and evaluate where they ought to see more play. Today, we’re taking a look at a tutor that I think deserves more consideration in Commander: Mwonvuli Beast Tracker!

Most people will immediately compare this creature to Worldly Tutor. They both tutor a creature card to the top of your deck, but Tracker is more expensive, does have some limitations, and is at sorcery speed. Clearly, Worldly Tutor is the much better card, but there is a significant monetary cost to it that not everyone wants to (or can) pay. There are also some decks that can make better use of tutor-based creatures, but we'll get into that later in the article! For these reasons, I think that there is a wider range of applications for the Tracker than the current set of decks.

Stonebrow, Krosan Hero is the most played commander for Mwonvuli Beast Tracker, and it's pretty clear why. Stonebrow is basically trample tribal. This makes the restriction of which creatures Tracker can find almost completely irrelevant, and at three mana it would be insane not to include such a powerful tutor.

Then there's Hua Tuo, who aims to use his ability with effects like Call of the Wild to efficiently cheat in threats; he makes any top-of-the-deck tutor a shoo-in. There is also the factor of Hua Tuo's built-in recursion with sacrifice outlets like Perilous Forays, making Tracker a repeatable engine that makes it a powerful asset! Finally, with Rayami wanting to borrow every keyword under the sun from your creatures, having a tutor for any missing keyword is just what this deck wants!

While keyword decks are a clear pairing for Tracker, I think that there are a lot of unexplored commander options out there, so let's get into it!

Remember back in the glory days? Playing your all-creature deck, just stomping to victory? Well, Nikya of the Old Ways may be the commander for you! She doubles the mana your lands produce while denying you the ability to cast any noncreature spells.

This single restriction changes the types of ramp, card advantage, and interaction this deck can run, so Mwonvuli Beast Tracker is one of the few tutor effects that Nikya can run that has no opportunity cost of winding up stranded uncastable in her hand, which is why I'm shocked that so few decks run it.

There's also the aspect of being able to find creatures such as Ruric Thar, the Unbowed, God-Eternal Rhonas, Acidic Slime, or Hornet Queen. All of these creatures are very unique in their effects, whether via interaction or aggression, so Nikya has a very diverse set of abilities this card can help her find, rather than it only finding a single type of creature, such as large tramplers. Having a Tracker to find these diverse cards is therefore flexible and can even be game-winning!

While Mwonvuli Beast Tracker may not be the absolute best tutor, I still think that it is deserving of a slot in Nikya decks, so the last thing to do is take a look at the massive block of creatures in the decklist!

The Dinosaur in the Room

I got the inspiration for this inclusion from getting absolutely stomped by our Social Media Manager, Christian Alexander's Gishath, Sun's Avatar deck. For those that have been living under a rock, Gishath is a Dinosaur, which is enough to let people live out their childhood dreams. He also happens to be an absolute house that can make his own army of dinos out of nowhere! Why would he need the help of a tiny Human like Mwonvuli Beast Tracker?

Right off the bat, any top-of-the-deck tutors just read "put this into play" with Gishath out as long as you're finding a Dinosaur. That on its own makes me wonder why Mwonvuli Beast Tracker is ignored; even Congregation at Dawn is only played in 36% of Gishath decks. To me, this shows an under-evaluation for this effect, especially with several very potent options available in these colors.

Getting into what you can tutor for with Tracker, there exist fewer Dinosaurs with trample than I feel like there ought to be. Is that weird to anyone else, or just me? The ones that do, though, are Zetalpa, Primal Dawn, Quartzwood Crasher, Zacama, Primal Calamity, and Regal Behemoth, and these are some absolutely bomb creatures. Think about it this way: Gishath turns Tracker into any of these insane creatures for three mana!

If this isn't enough reason, the best thing is to take a look at the decklist to see the insane value of Dinosaurs!

Say what you will about Kathril, Aspect Warper, but its art is absolutely terrifying, and I love it. Props to you, Mathias Kollros, for making it look so horrifying yet so fantastical! Functionally, though, Kathril is a pure counter commander, using keywords and +1/+1s to buff itself so much as to become unstoppable. How would a card like Mwonvuli Beast Tracker be useful to this great Insect?

Mwonvuli Beast Tracker finds almost any creature in the decklist below, because it's basically just keyword soup. Seriously, there's Zetalpa, Primal Dawn, Akroma, Angel of Wrath, Elder Gargaroth, and even Questing Beast. Then, with a simple mill spell like Satyr Wayfinder, Tracker turns into a second Entomb with upside.

Another option is to ramp into these threats or reanimate them with cards like Ever After after making a beefy Kathril! This is also the perfect deck for Tortured Existence to swap Satyr Wayfinder, and Sakura Tribe Elder with keyword creatures for Kathril, by the way. Personally, Kathril is one of my favorite commanders from this year, with lots of cool and crazy options. Here's how the Tracker might fit into Kathril's nightmarish deck!

End of the Tracks

Thank you all for your continued support of the series! I hope that you enjoyed reading this installment and that you’ve found a new home for Mwonvuli Beast Tracker. Do you think that these commanders pair well with Mwonvuli Beast Tracker? Do you think that I’m overestimating this card, or do you agree it’s highly underrated? What other cards are you hoping to see get their place in the spotlight? Let’s talk about it in the comments below. Thank you all once again, and I hope that you have an amazing week.