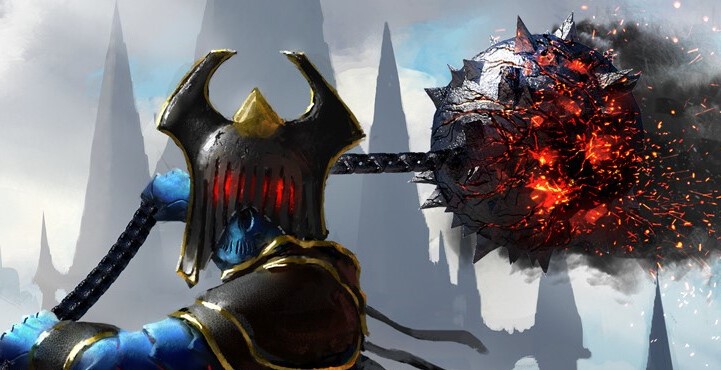 So a Butcher Walks Into a Stairwell…

That’s how the joke goes, right? No? Oh well, anyways, welcome back to The Toolbox! Here we take a look at underplayed cards and evaluate where they ought to see more play.

Today we are taking a look at Tombstone Stairwell and Dreadhorde Butcher! These Zombie-centric cards are a bit odd compared to the rest of the typical suite, but they definitely draw some interest. So are they worth the slot? Or are they just random draft chaff? Let’s find out!

Let the Bodies Hit the Floor

So you know how people say, “Reading the card explains the card”? Well, that is mostly true with Tombstone Stairwell. The easy version is that, at the beginning of each player’s upkeep, each player makes a 2/2 Zombie token with haste named Tombspawn for each creature in their graveyard. Then, at the end of turn or when Tombstone Stairwell leaves the battlefield, all of them are destroyed. The main drawback is that this effects is symmetrical and there is a Cumulative Upkeep of two mana.

Do these drawbacks make the card unplayable, though? No. Very much no.

Iname is a great home for this enchantment. When Iname enters play, you get to put a ton of creatures into your graveyard, which then makes Tombstone Stairwell produce a ton of Zombies. Yahenni is at their strongest as an aristocrat. With no time for subtlety, they put a ton of creatures into their graveyard, which then makes a larger Zombie horde for you, and gives Yahenni a bunch of death triggers from all your opponents’ Tombspawn dying! Tombstone Stairwell also makes a Zombie horde for the queen herself, Varina!

Be sure to listen to the EDHRECast with Cameron Bachand, from the LabManiacs, as this is how I heard about Tombstone Stairwell. Extra Meren of Clan Nel Toth experience counters? More Sidisi, Brood Tyrant Zombie tokens? Additional Teysa Karlov death triggers (plus lifelink and vigilance on your Zombie tokens)? Pretty bonkers stuff. Where else can we use this nifty enchantment?

I don’t know why, but the bananas in Tasigur, the Golden Fang‘s original art have always just been hilarious to me. Even as a 4/5 for six with Delve, and even with his ability to fill the graveyard and return a nonland card of an opponent’s choice to our hand, the bananas are still my favorite part of the card.

Tasigur is typically a competitive control commander, using his ability to recur card advantage or removal spells from the graveyard. So why should Tasigur run a card like Tombstone Stairwell in a deck that is typically very spell-heavy?

Easy: Tasigur wants to put cards in the graveyard, so he can act as a self-mill or Dredge commander in additional to all that control.

With things like Golgari Grave Troll, World Shaper, and Underrealm Lich to further fill up the bin, we can really make Tombstone Stairwell a solid payoff. We can also use it as a bargaining tool, asking an opponent to return an Assassin’s Trophy from Tasigur, or you’ll attack them with your horde of Zombies!

What more could you want from a commander? Take a look at the decklist to find out!

Dreadhorde Butcher is a very interesting card, in some ways quite reminiscent of Murderous Redcap. It’s a 1/1 for two mana, and whenever it deals combat damage to a player or planeswalker, it gets a +1/+1 counter. In addition, when it dies, it deals damage equal to its power to any target! However, I am guessing that most of you would not touch this card with a ten-foot pole for Commander.

The Butcher is in so few decks that it barely has any Top Commanders on its EDHREC page. So why do I think that Dreadhorde Butcher should be played in our format?

Well, that ‘dies’ trigger can get pretty hefty. If you play Kresh the Bloodbraided or Reyhan, Last of the Abzan with a red Partner, you might be able to fashion quite a big creature that will dome an opponent if it ever hits the bin. Additionally, Thraximundar Zombie tribal decks wouldn’t do half-bad with an extra-punishing Zombie at their disposal.

Are there any other commanders that should be running Dreadhorde Butcher?

God Save the Queen

She may not be queen on paper yet, but Marchesa, the Black Rose is the true queen in my heart. She is a 3/3 Human Wizard with Dethrone, she gives other creatures you control Dethrone, and whenever a creature with a +1/+1 counter on it dies, she returns it to play at the beginning of the next end step! That is a whole lot of value for four mana.

Dreadhorde Butcher benefits from Dethrone, gathering additional +1/+1 counters, but best of all, when it dies, Marchesa will reanimate it, to deal even more damage! If you’re feeling the tribal fantasy, you can run everything from Lord of the Accursed, Diregraf Captain, and Liliana, Death’s Majesty, pumping up the Butcher’s power (remember, it deals damage equal to its power, not damage equal to the number of counters on it).

For a Zombie-centered Marchesa deck, Dreadhorde Butcher is a solid card to have in your toolbox. Just take a look at the decklist to see for yourself!

Is there a commander that wants to play both Tombstone Stairwell and Dreadhorde Butcher? Yes, I think there is.

Alesha, Who Smiles at Death must think death is a camera because dang, she smiles a lot! She’s a 3/2 first striker, and when she attacks you can pay two mana to put a creature with power two or less onto the battlefield, tapped and attacking. Why does she need something like Tombstone Stairwell or Dreadhorde Butcher?

Alesha can reanimate pretty much anything that you would be putting in your graveyard, such as Mentor of the Meek, Gonti, Lord of Luxury, or Master of Cruelties. Just like Marchesa, repeatedly returning a card like Dreadhorde Butcher will ping your opponents into oblivion. The redundancy of having a second Murderous Redcap-style effect is quite nice too, in case folks have packed graveyard hate against you.

Speaking of which, you’re constantly putting cards into the bin with things like Liliana, Defiant Necromancer, Reforge the Soul, and Altar of Dementia, so why not benefit off of it with something more than reanimation? Like, say, making Tombspawn tokens with Tombstone Stairwell! You’ll get even more creatures to attack with, and if you have a Blood Artist or Zulaport Cutthroat out, you really can’t go wrong. The synergy is just so strong and overlooked, and the Cumulative Upkeep cost becomes well worth it.

If you don’t believe me, take a look at the decklist to see what you can do!

Time to Become a Zombie

Thank you all once again for your continued support for the series. What’s your favorite underrated card? Do you agree or disagree with my thoughts on Tombstone Stairwell and Dreadhorde Butcher? Where do you think they should see more play? Please share in the comments below, and as always, have a great day!